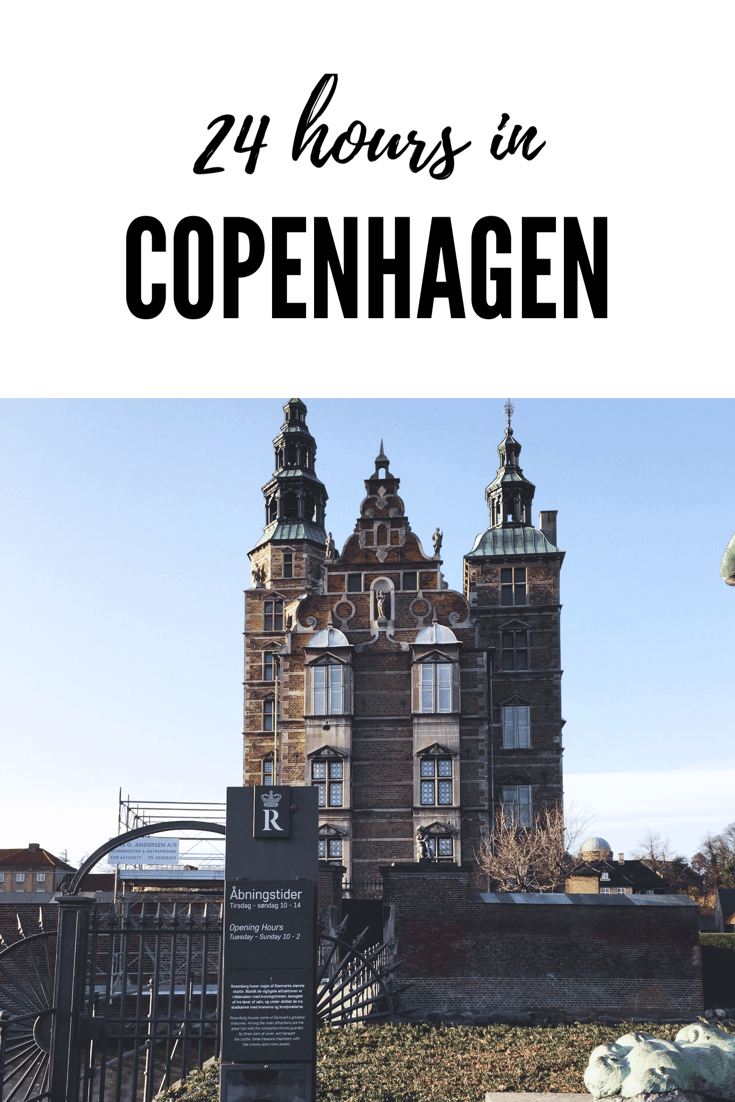 After discovering my favorite Scandinavian capital of Stockholm, I moved on to Copenhagen, Denmark. I had heard about the strong bike culture in Copenhagen and was excited to rent a bike and explore the city. Similar to the other cities, I spent a little more than 24 hours in Copenhagen, but the majority of my sightseeing activities were done within a 24 hour period. My guide to 24 hours in Copenhagen includes a tour through Nyhavn (the painted houses), Christiania (the alternative district), and the Carlsberg Brewery.

When I was in Stockholm, I met a couple of travelers at my hostel who were also headed to Copenhagen, so we decided to meet up in Copenhagen and see some of the sights together. We met at my hostel in the morning and walked over to a bike rental shop nearby to rent bikes for the day. There are laws in Copenhagen regarding bike lights, similar to laws that apply to car lights, so make sure you rent a light to attach to your bike if you think you may be biking in the dark at any point. You may also be given the option of renting a bike lock – I would take it as you will end up having to pay a lot more money if your bike is stolen. It is generally very safe in Copenhagen, and your bike may be fine without a lock, but I would recommend taking this extra precaution just in case. 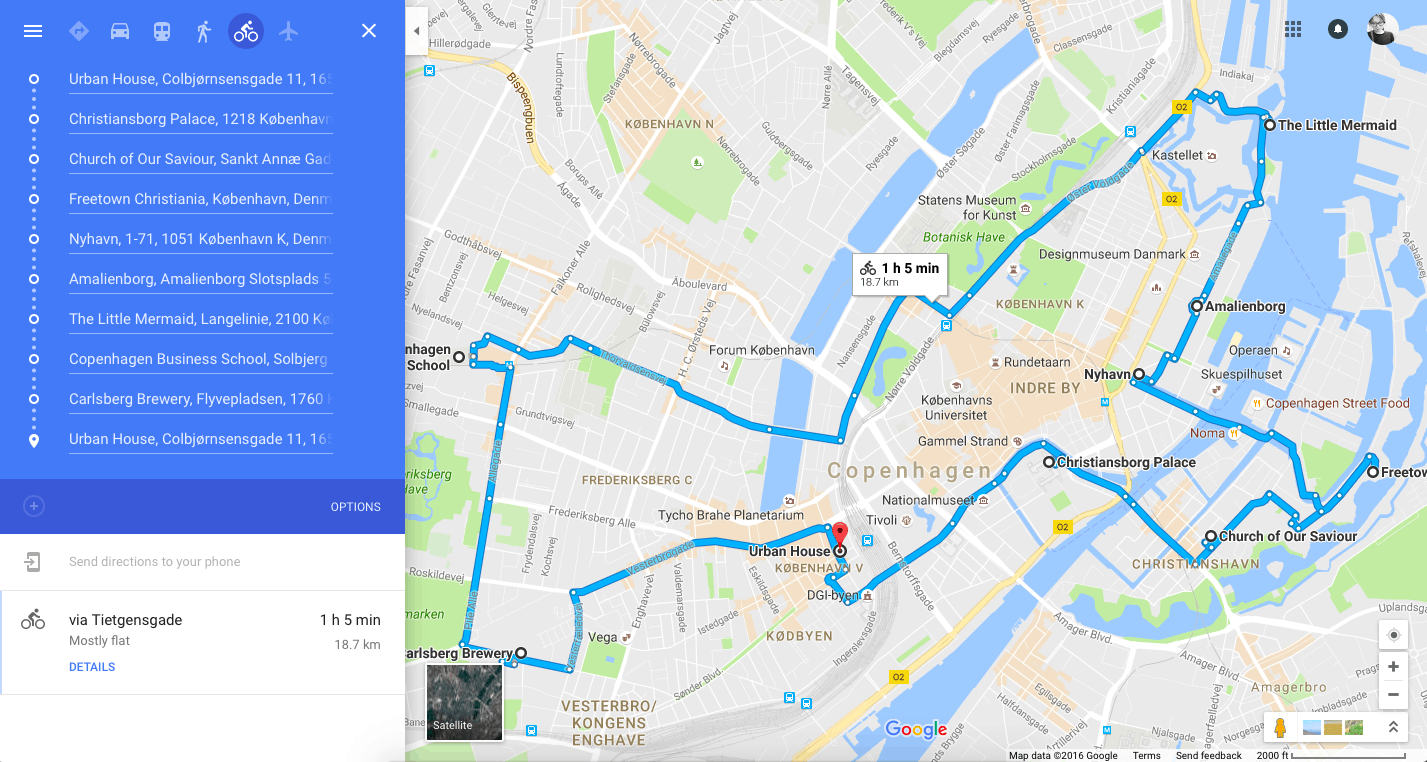 A map of our route during our tour of Copenhagen

Once we were ready to go with our bikes, we headed first to Christiansborg Palace, where the Danish Parliament, the Danish Prime Minister’s Office, and the Supreme Court of Denmark are located. Thus, it contains the legislative, executive, and judicial branches of government. In fact, this is the only building in the world that houses all three of a country’s branches of government. This palace is located on Stotsholmen in central Copenhagen. 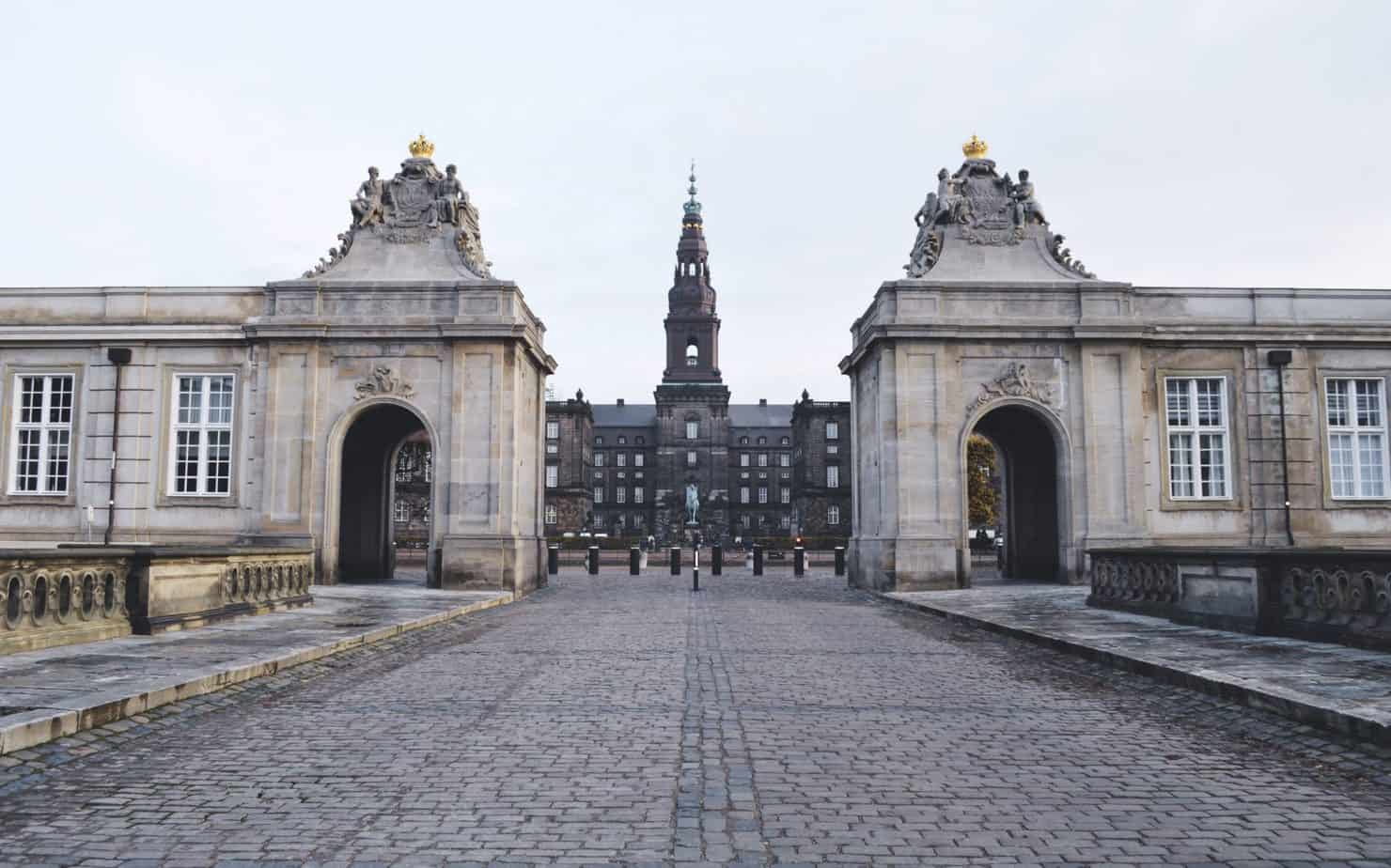 Christiansborg Palace was originally built in 1167 and has sustained two serious fires and three eras of Danish architecture. Today, the large courtyard in front of the palace is covered with a cobblestone layer (which was quite difficult to maneuver on our bikes) and features riding grounds, although we did not see any horses that day. Visitors are allowed to explore the inside of the palace for a fee, and guided tours are available. We chose not to pay for a ticket since we were trying to get a lot done that day and were traveling on a budget, but we were able to step into the main lobby area, which already featured beautiful architecture and art. 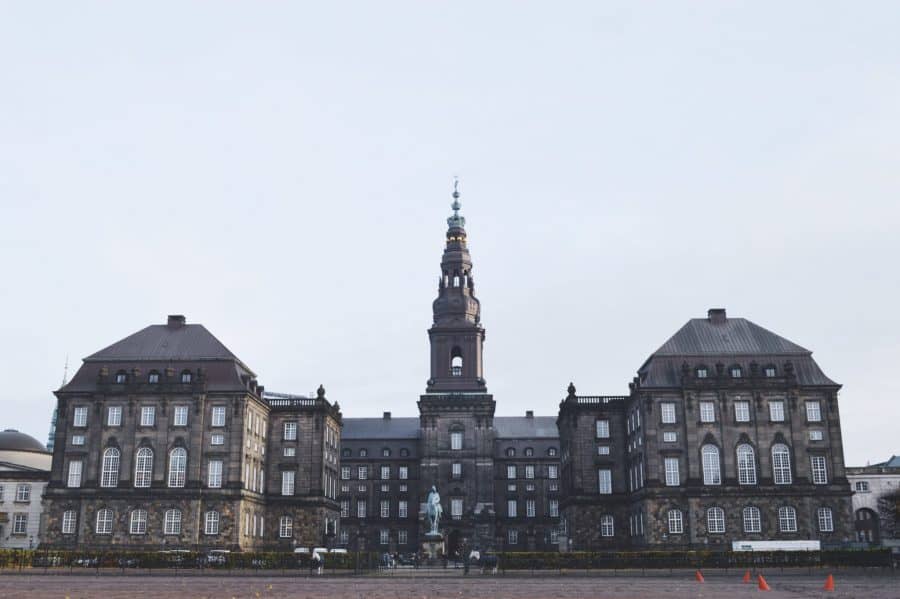 After marveling at the most elaborate and beautiful government building I’ve ever seen, we moved on to Christianshavn to check out Freetown Christiania. First, we stopped at Church of Our Savior, a baroque church with a winding staircase leading up to the top of the church and providing panoramic views of Copenhagen. We paid the 35 DKK ($5 USD) fee to climb up the spire, and the view was spectacular. Keep in mind that the spire is very narrow and winding and can feel quite precarious on a windy day like the day I was there, so if you have an extreme fear of heights, I would recommend that you consider alternative options to get your panoramic view. Also keep in mind that the tower is closed in January and February and has limited opening dates in December, so make sure you check the website for hours of operation before heading over in the winter months. 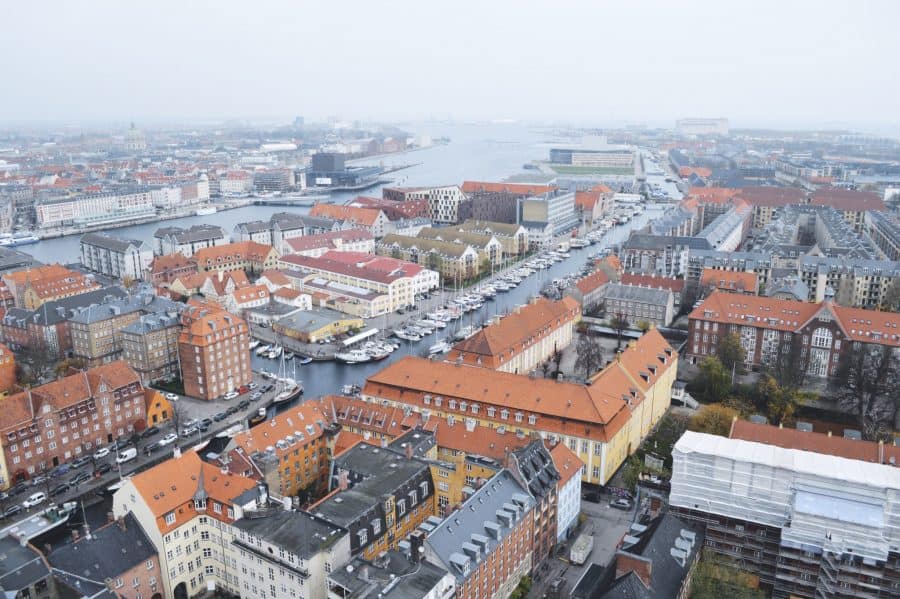 The spire was constructed in 1752 and contains 400 steps to the top. There is also a carillon that sits in the church, and this happens to be the largest carillon in northern Europe and plays a melody every hour from 8:00AM to midnight. Rumor has it that the builder of the spire fell from the spire to his death, but I believe this tragic account is nothing more than a rumor. 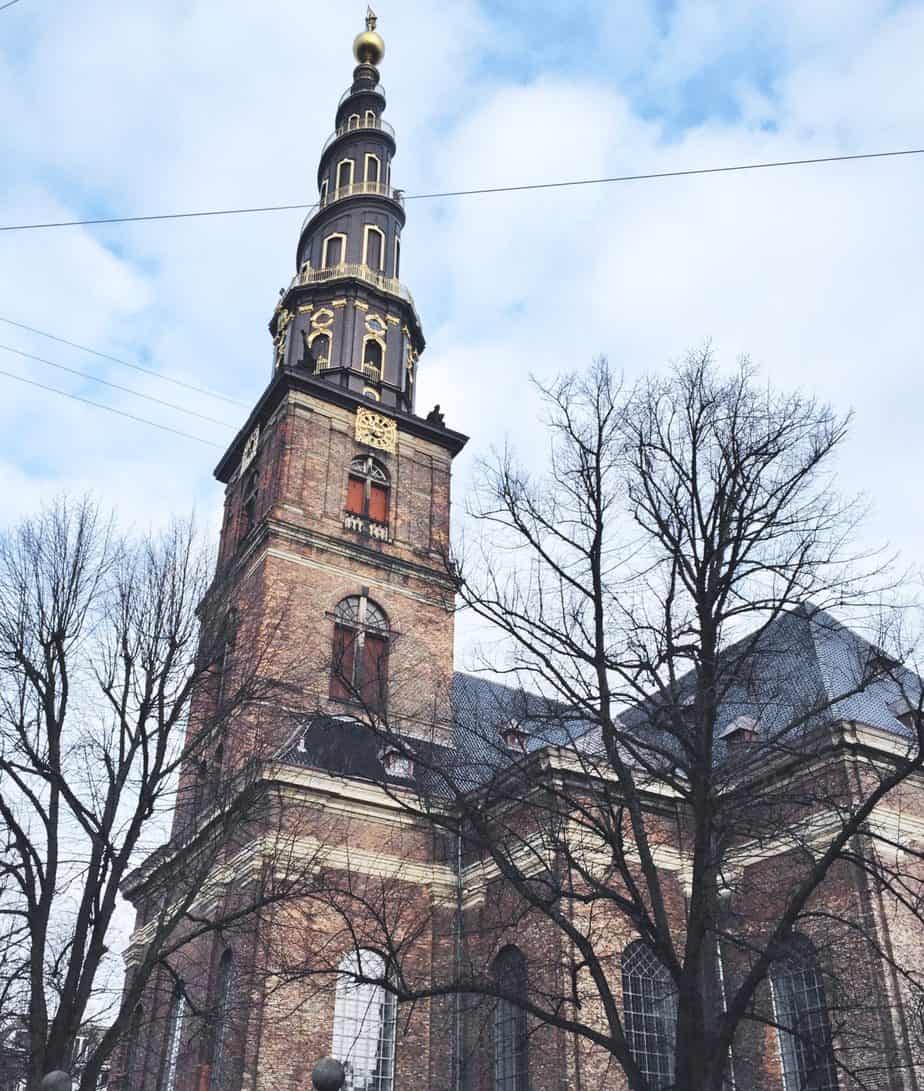 Freetown Christiania, or Christiania, is Copenhagen’s “hippie commune” and perhaps the most interesting part of Copenhagen. The residents of Christiania have proclaimed Christiania as an autonomous region that is separate from local or federal laws. Christiania even has its own currency (the Løn) and flies its own flag, which has a red background with three yellow dots in a horzontal line. There are currently around 850 residents living in this 84 acre neighborhood in the borough of Christianshavn. The location was formerly a military base that was subsequently abandoned and replaced by Christiania in 1971. Its original founders were squatters and artists that created the commune as a social experiment.

One of the main things Christiania is known for is its cannabis shops that are open 24 hours a day and sell 30-40 types of hashish. These shops operate on one stretch of road called Pusher Street and are constantly monitored and patrolled for tourists taking photos or conducting themselves in a suspicious way. This is because marijuana is technically illegal in Copenhagen, and police raids, although infrequent, do happen occasionally. You may take photos in other parts of Christiania, but if you are caught taking a photo on Pusher Street, you will end up causing a scene and be removed from the area.

UPDATE (10/28/16): As of September 2016, the cannabis shops in the Green Light District, or Pusher Street, have been demolished in response to violent crime involving gangs in the area. Although cannabis shop vendors are required to be Christiania residents, some outside gang members have infiltrated into Christiania and created this unsafe and hostile environment. In an attempt to restore peace and help the Copenhagen police officers control crime, the residents of Christiania have decided to shut down all cannabis vendors in Christiania. 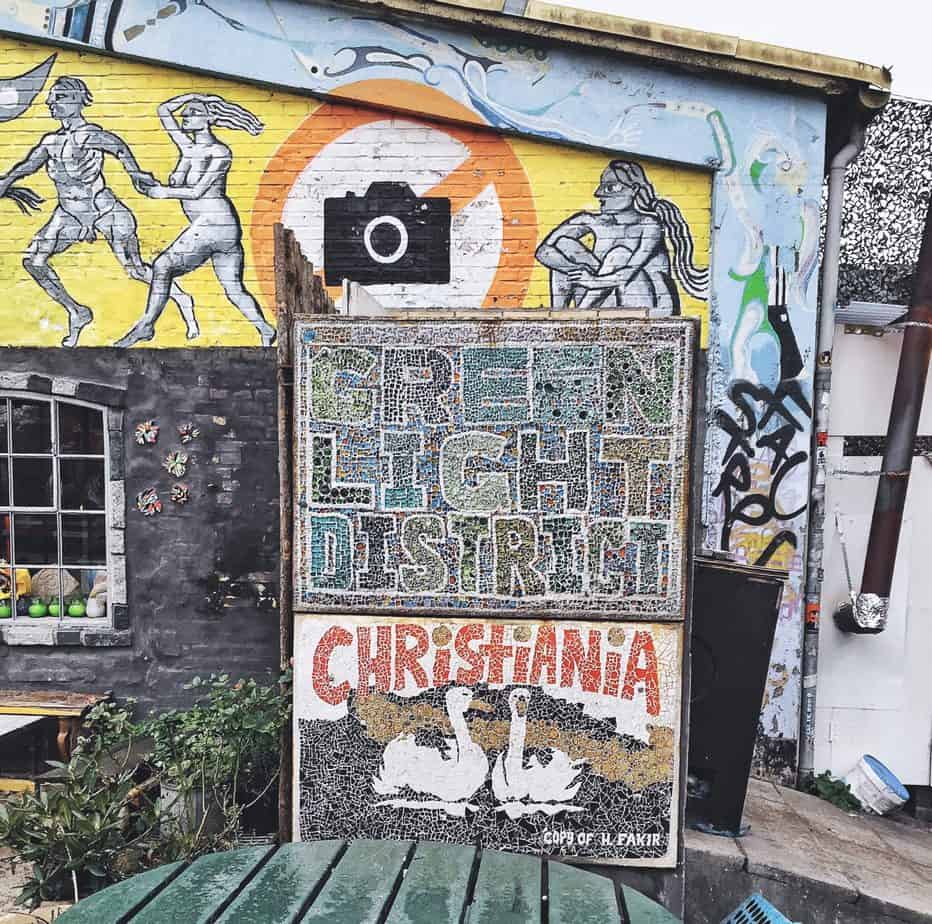 One area where residents of Christiania like to “smoke weed everyday,” as Snoop Dogg does, is Nemoland. Contrary to what you may think, Nemoland has nothing to do with the little orange fish we all love so dearly. This is an open, although hidden, area where you can find a good view of Christiania’s natural beauty. Since the area is elevated, you can also get a good birdseye view of Christiania from Nemoland. 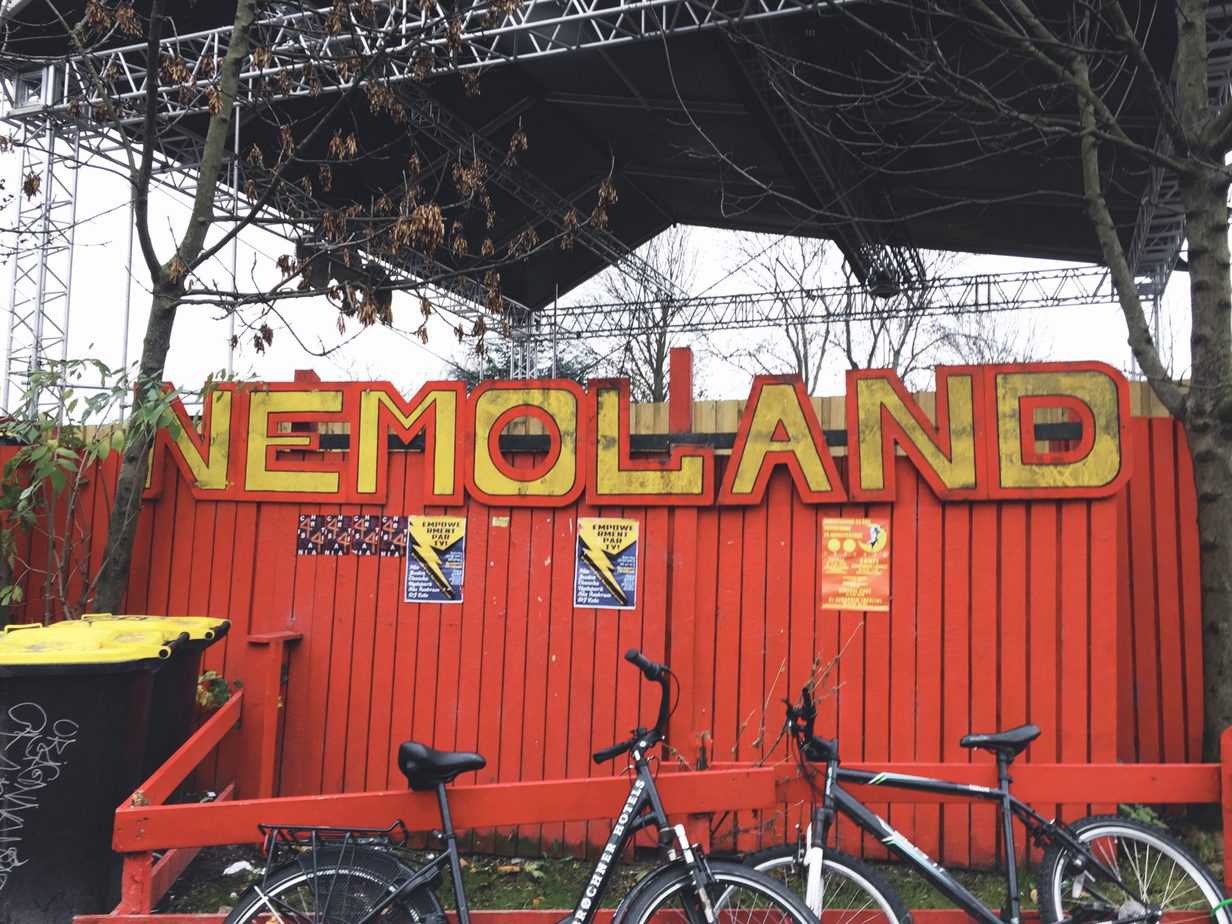 We had lunch in Christiania as the prices there were significantly lower than the prices in the rest of Copenhagen. As a bonus, the food in Christiania is all locally sourced, organic food, so you are really getting a good bargain for your money here. 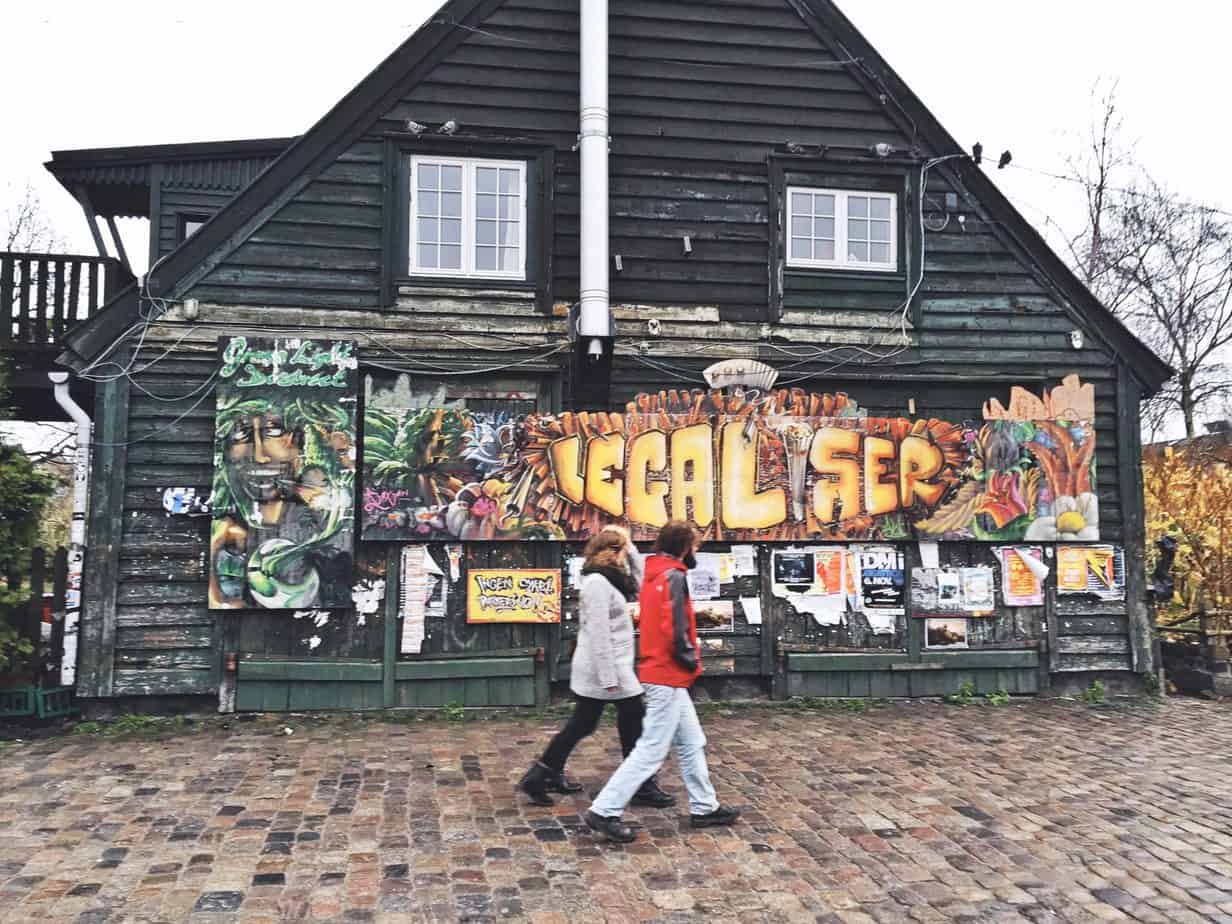 After leaving the hippie, alternative commune, we opted for a change of pace and biked toward Nyhavn, or the “painted houses,” the most iconic and beautiful area of Copenhagen. Before we reached Nyhavn, we saw a group of trampolines built into the ground on the side of the street. The inner child inside each of us came out, and we had to make a quick stop to play on the trampolines.

Nyhavn reminded me a bit of Amsterdam. There is a canal lined with colorful buildings. Many of these buildings are restaurants and bars, many with outdoor seating right along the canal. One thing that struck me about Scandinavians is that no matter how cold the weather is, the outdoor seating remains open, and there will always be people who choose to sit outside. Most restaurants/bars provide blankets for those who sit outside, but that didn’t make us feel any less wimpy or dramatic about running inside to get out of the cold as we saw groups of locals enjoying their meal or drink outdoors. 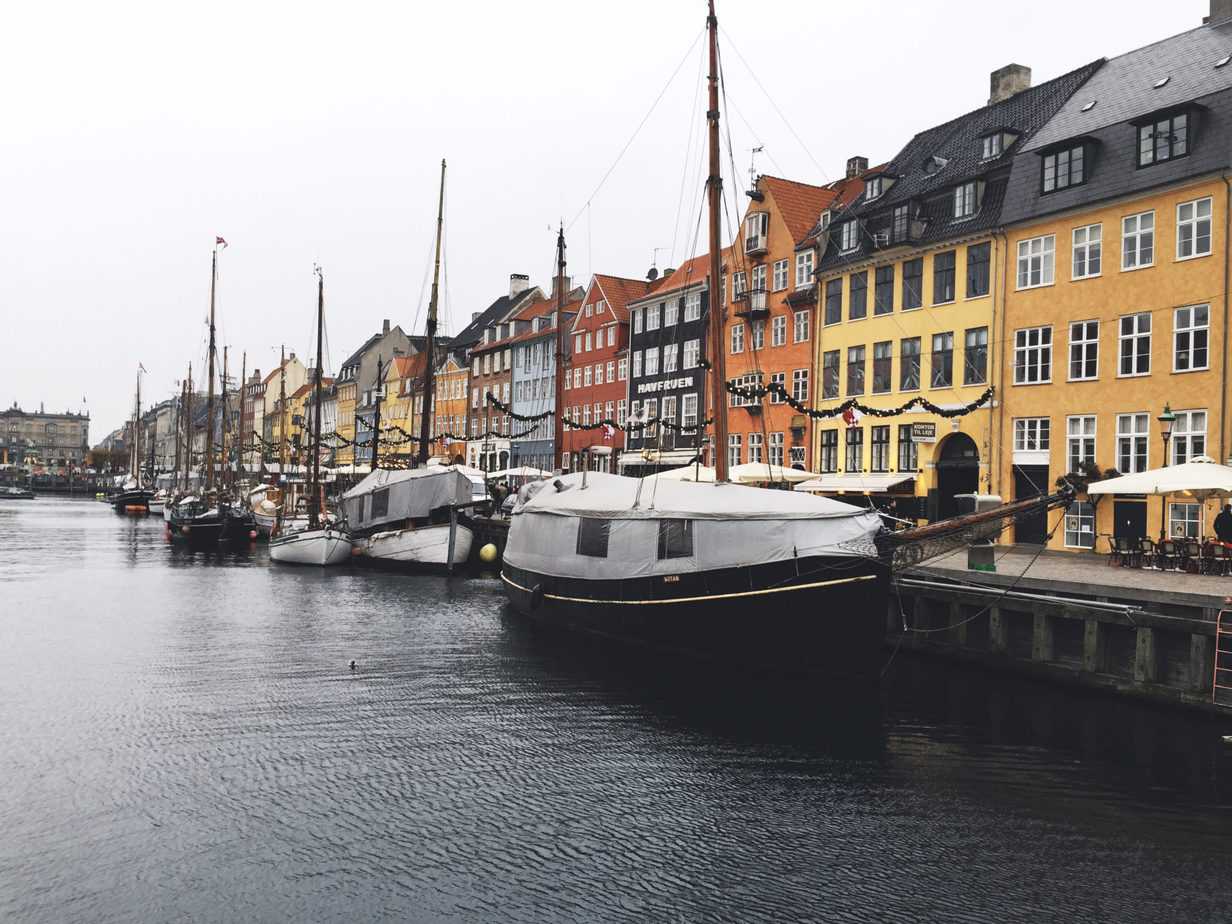 It started raining when we were in Nyhavn, so we ducked into one of the bars along the canal to escape the rain. The bar was underground and very warm and cozy, but be prepared to pay $10 USD or more for a beer here. It was probably not a smart idea on our part to get a beer in one of the most touristy areas of Copenhagen.

After warming up from the cozy bar and our drink, we headed back out and biked toward the famous Little Mermaid statue. On our way there, we passed by Amalienborg, the palace where the Royal Danish family resides.The palace was constructed in the 1700s and is considered one of the greatest works of Danish Rococco architecture. Amalienborg consists of four identical buildings with a statue of King Frederik V in the middle of the plaza. The palace is also known for its royal guards, and you can see the changing of the guards here every day at noon. We did not walk around the palace, but from what we could see from the bike path, the palace is absolutely stunning. 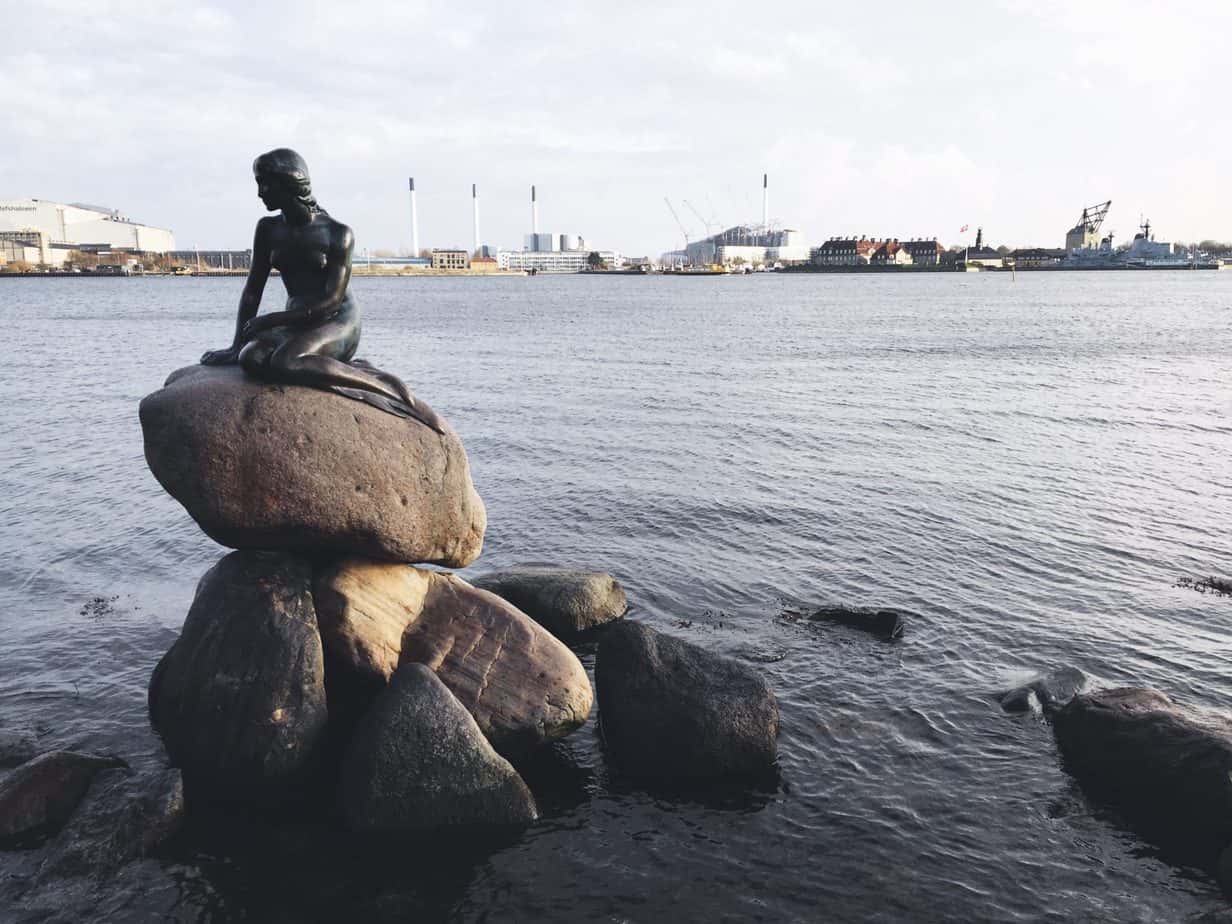 We knew we arrived at the Little Mermaid when we saw a big crowd of people off to the side of the road. I was not able to actually see the Little Mermaid until I was much closer to the water because of its small size. I was quite surprised by how small this bronze sculpture is, and my personal opinion is that this sculpture is very overrated. The sculpture is only 1.25 meteres (4 feet) tall but weighs a whopping 175 kilograms (386 pounds). I would recommend seeing this only because it’s a popular landmark in Copenhagen and is close to other worthwhile sites, such as Amalienborg, but I would not go out of my way to return here on my next trip to Copenhagen.

Last but not least, we visited the Carlsberg Brewery. On our way there, we made a quick stop at the Copenhagen School of Business, as one of the travelers I was with had almost planned to attend when she was in college, so she wanted to see what she missed out on. The building was modern and beautiful. I had the chance to walk around some of the University of Copenhagen buildings the night before, and the architecture of some of the buildings is truly breathtaking. Anyone who attends university there is very lucky to be surrounded by such picturesque sights every day

We had a little bit of trouble finding the Carlsberg Brewery because there was some construction leading up to the road that it’s on, but once we did we were ready to learn about the history of the brewery and sample some beers. The admissions fee to the brewery is 95 DKK ($14 USD) and comes with two beers (or soft drinks for those under 18).

Carlsberg brewery was founded by a man named J.C. Jacobsen and named after his son, Carl. In the early 1900s, Carl adopted the swastika as the symbol for Carlsberg beer. Keep in mind that the swastika traditionally represented purity, and Carl wanted to show that his beer was pure. However, after the Nazis took over in the 1940s, Carlsberg Beer abandoned its swastika symbol as it no longer represented purity. However, the iconic gate leading to the brewery still bears the swastika symbol on the large elephant statues that border the gate, as that was never changed after it was built. So, if you see the swastikas as you’re approaching the brewery, know that there’s no reason to be alarmed as it is merely a sign for purity and not a sign that Nazi forces are behind the brewery. 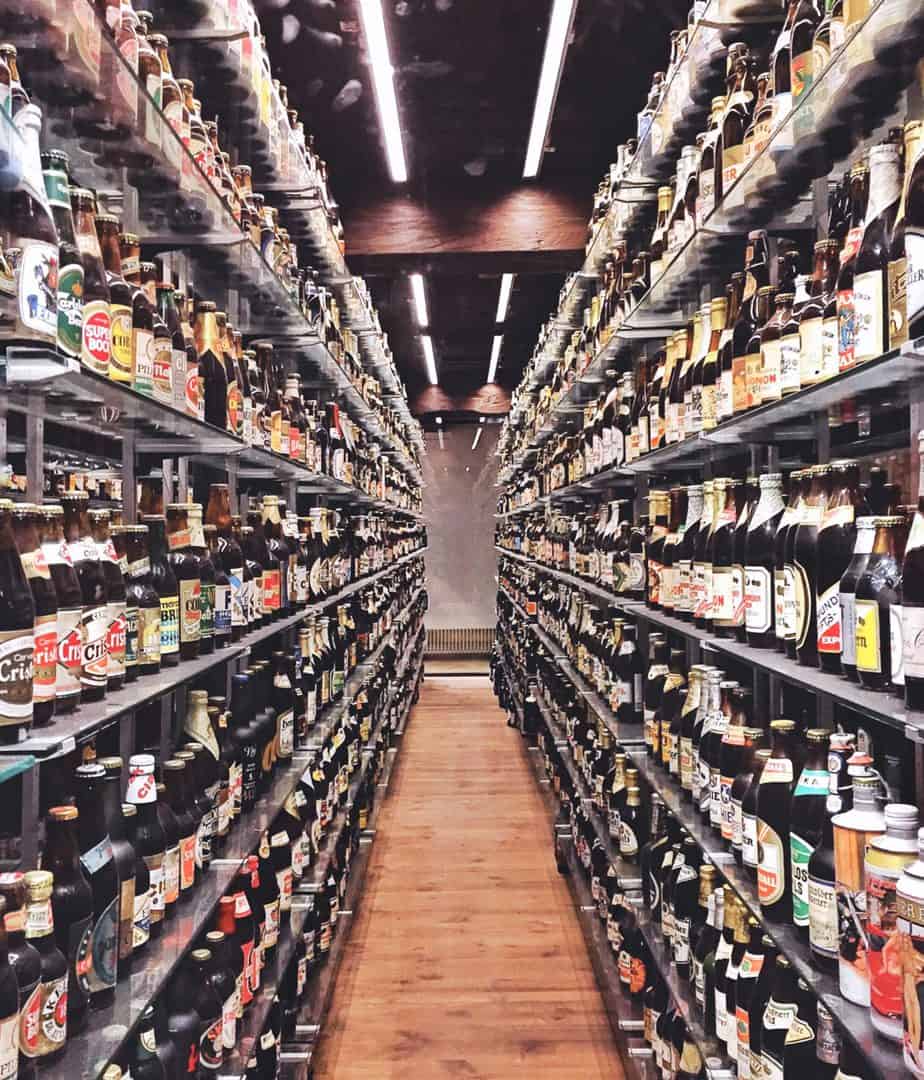 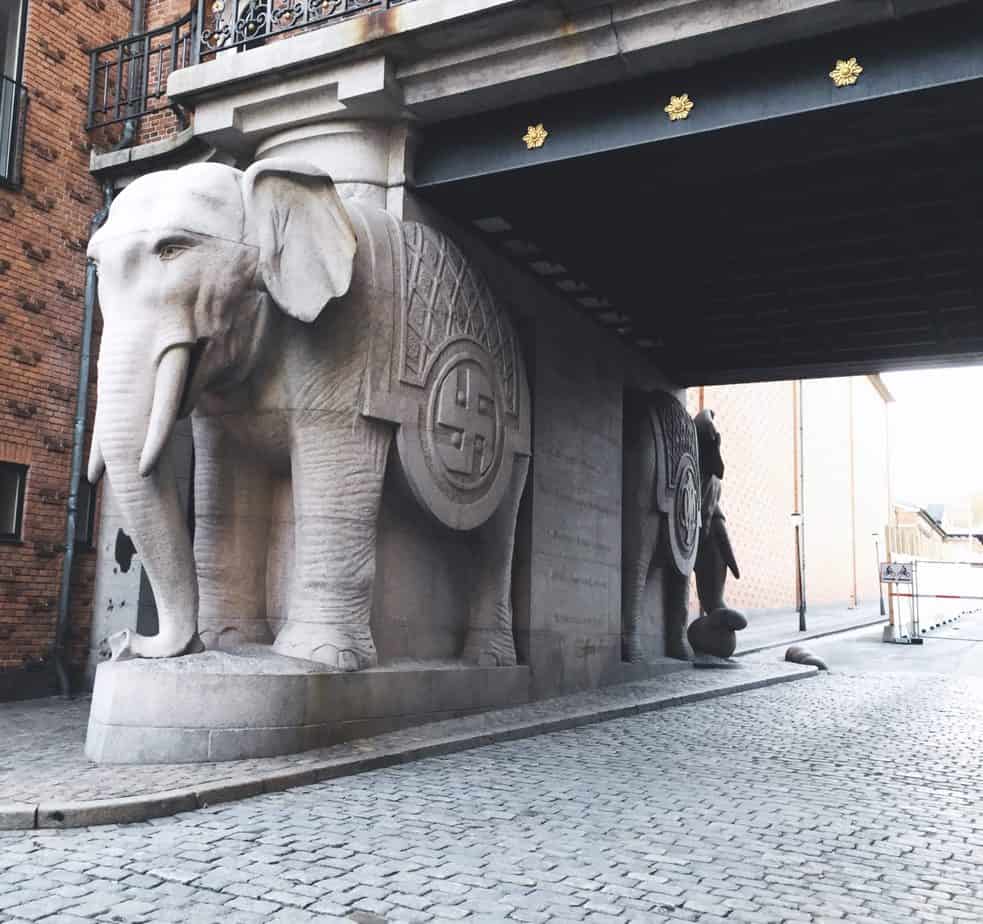