After my first stop in Budapest, the second stop on my five-countries-in-five-days trip was Vienna, Austria. Upon arriving in the Wien Haubtbahnhof, I was excited to once again hear German spoken around me and to see signs advertising dishes with things such as sauerkraut and schnitzel. I arrived in Vienna just before noontime and immediately headed to my accommodation. When I was booking a place to stay in Vienna, I found that the hotels were not significantly more expensive than the hostels and decided to treat myself to a stay at the Arthotel Ana Adlon Vienna. 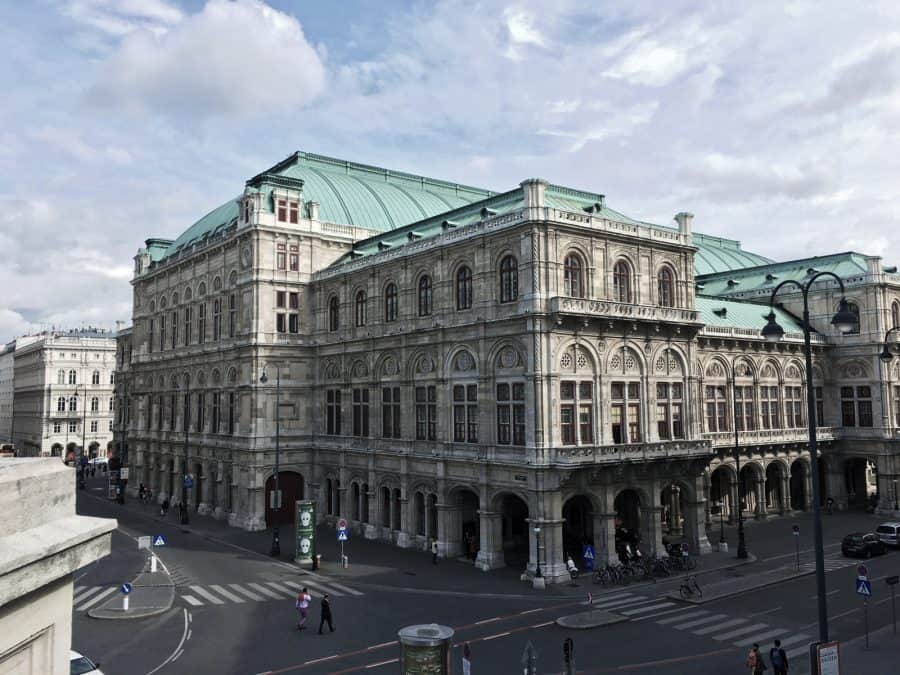 The hotel is conveniently located in the centre of Vienna, closest to the Wien Praterstern subway stop. If you are only spending 24 hours in Vienna, I would recommend booking your accommodations close to city centre or a subway stop so as to save travel time from your accommodation and the sights.

This also happens to be the stop where the Prater, a massive amusement park with an abundance of rides, games, and snacks, is located. I walked a few minutes past the Prater and came upon the Karl Kolariks Schweizerhaus restaurant. I ordered a soup and a dish (which I can’t recall the name of anymore), but I remember it being delicious and filling with reasonable prices. 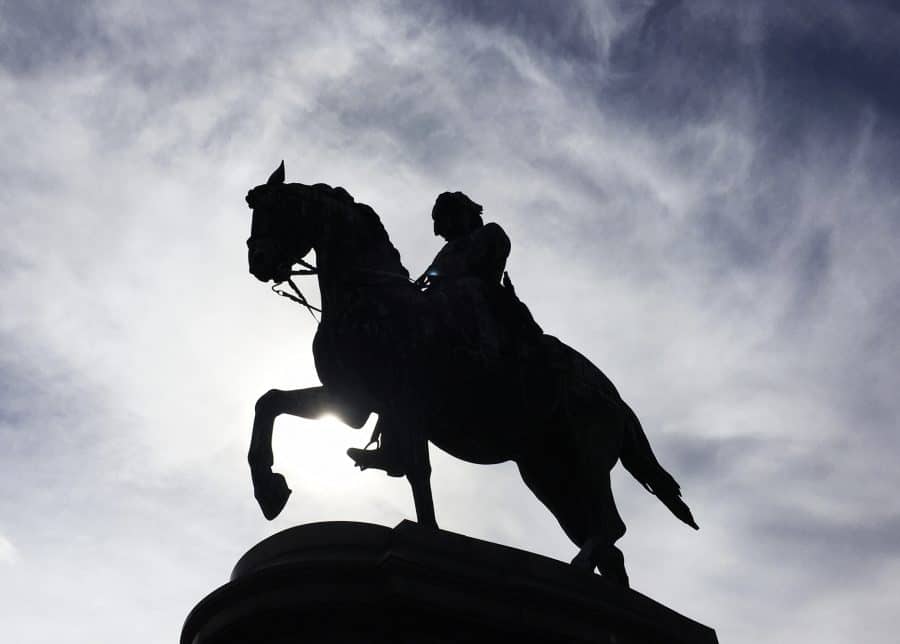 After my first Viennese meal, my first destination during my 24 hours in Vienna was the Mozarthaus, where Mozart lived from 1784-1787. Years later, the building was turned into a museum and remains so to this day. Because I felt satisfied with visiting just the location of the Mozarthaus and viewing the information they had in the lobby area, I chose to forgo the admission price of 11 euros to see the entire museum, and I moved on to my next destination on my 24 hours in Vienna tour: St. Stephen’s Cathedral. 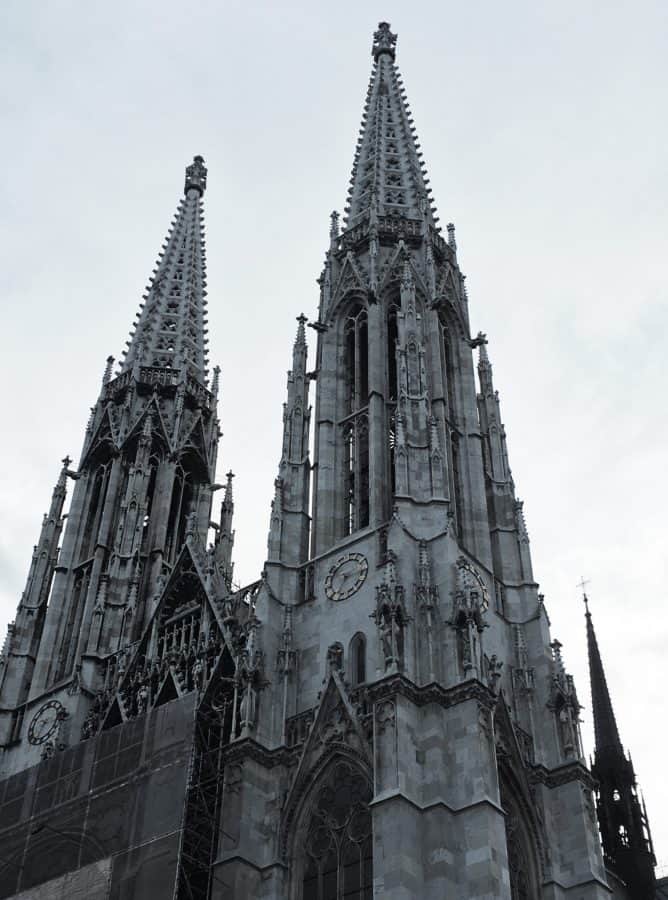 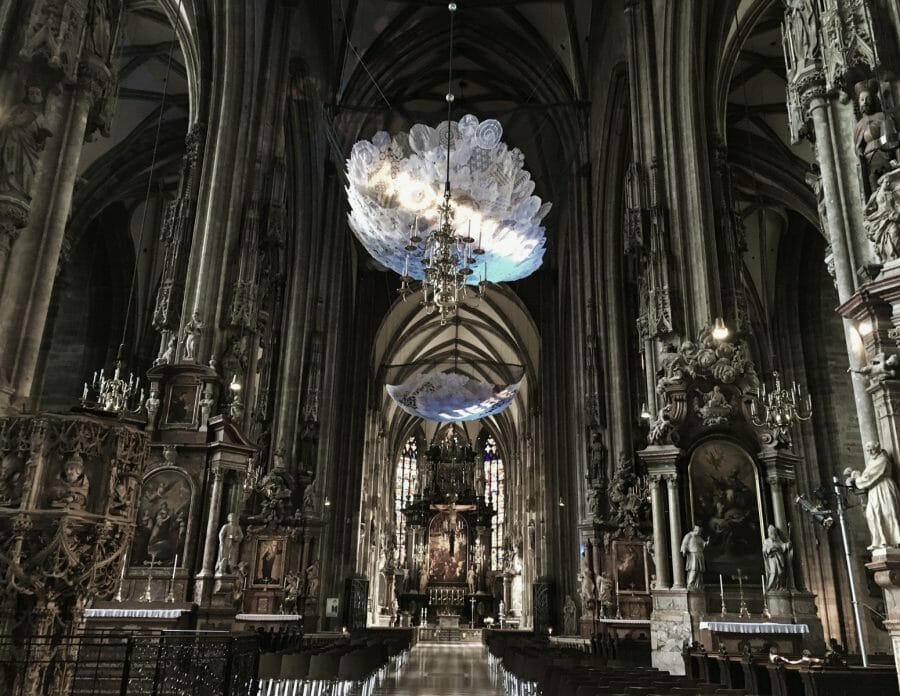 St. Stephen’s Cathedral is an absolutely stunning church with a largely Gothic style. The church was finished in 1160 but renovations continued for the next hundreds of years, and work is still being performed on it to this day. From St. Stephen’s Cathedral, I continued on to the Universitätsring, but on the way I stumbled upon another church – Peterskirche. It was nestled in an alleyway and was anything but extravagant on the outside. However, the inside was breathtaking and was made with countless shades of regal colours such as gold and red. 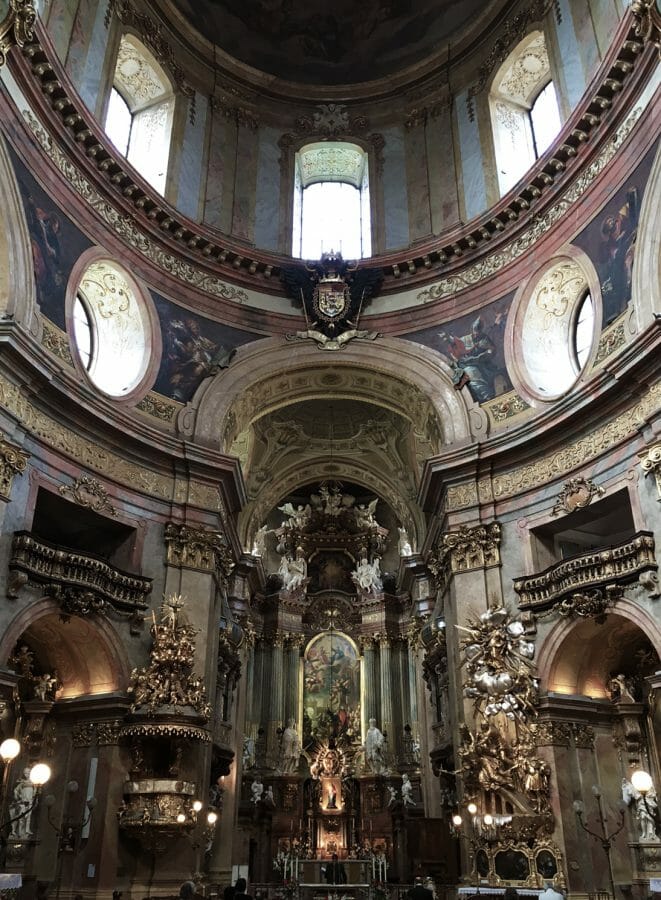 I left the church and passed through Stephansplatz on my way to Museumsquartier. The first word that comes to mind when I think of Stephansplatz is posh. The entire street was above and beyond in terms of architecture, companies, and so on. Even the H&M looked gold plated, and that was one of the least dramatic buildings on the street. 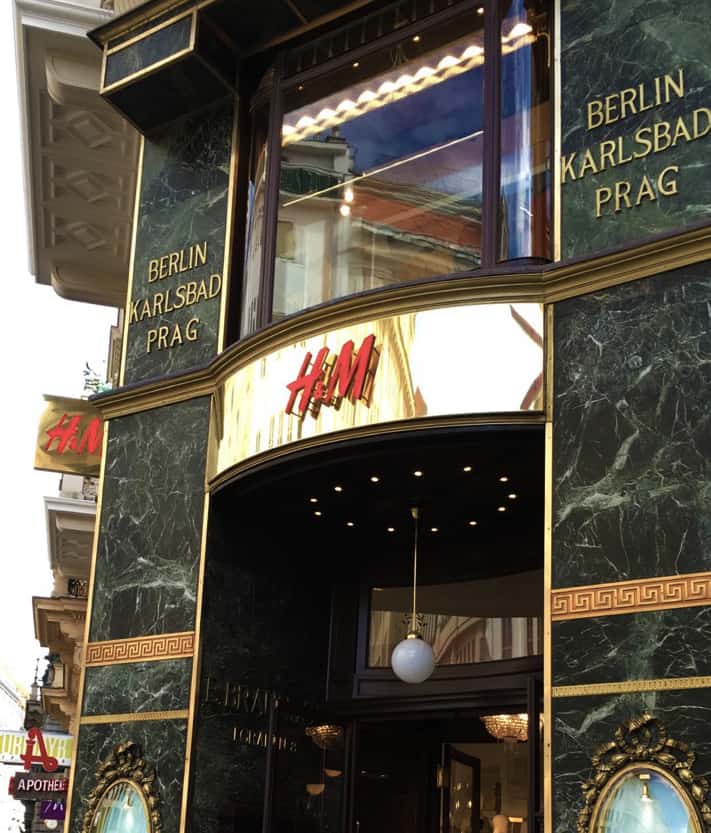 Museumsquartier is essentially a grouping of a large number of museums. While walking in the area, I saw every kind of museum I could’ve thought of. I tried going into the Kunsthistorisches museum, but it unfortunately was closing right as I walked in. I was only able to see the interior of the ticket desk area, but it definitely more than lived up to the extravagance of Vienna. At this point in the afternoon, most places were closed and so I was only able to view them from the outside. I walked up to the Austrian Parliament Building which had a number of Greek statues in the middle of the steps going up. 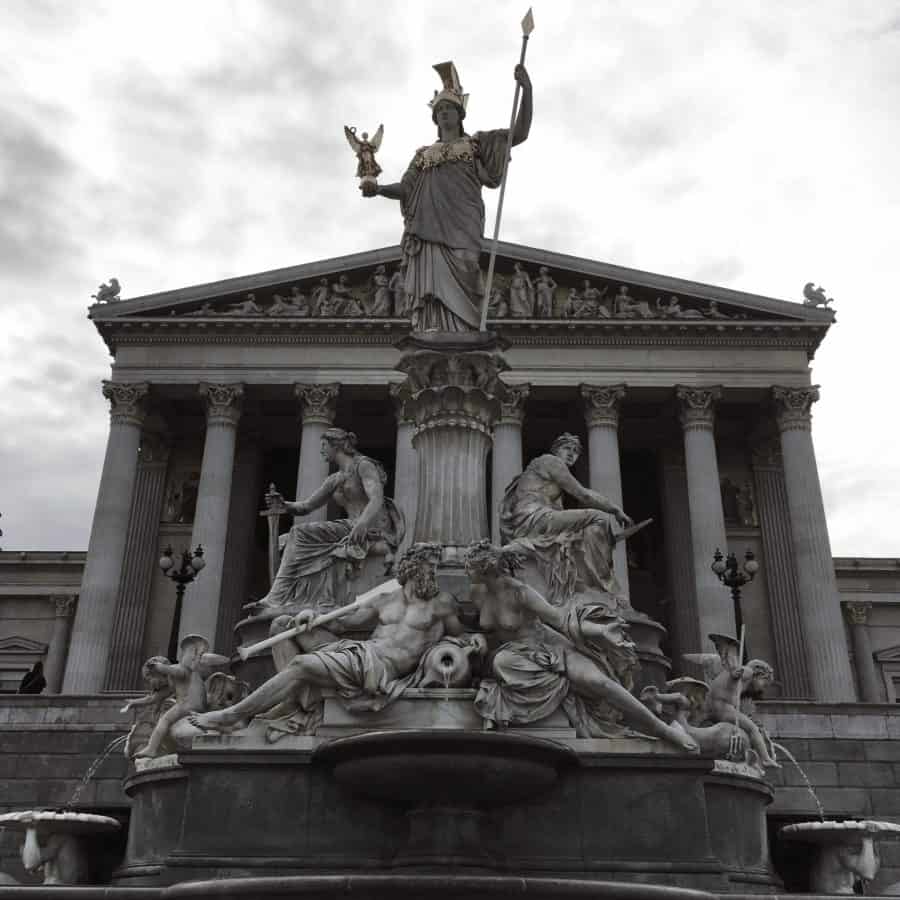 For dinner, I went to the Rathausplatz to watch a public viewing of the Euro Cup game between Italy and Spain. I had vegetarian Spaetzle from one of the many food stands there and watched the game from a screen mounted behind the Wiener Rathaus (city hall). Unsurprisingly, there were a large number of Italian fans, likely due to its close proximity to Austria. The crowd was wild, and this was definitely one of the most exciting games I’d watched this summer. 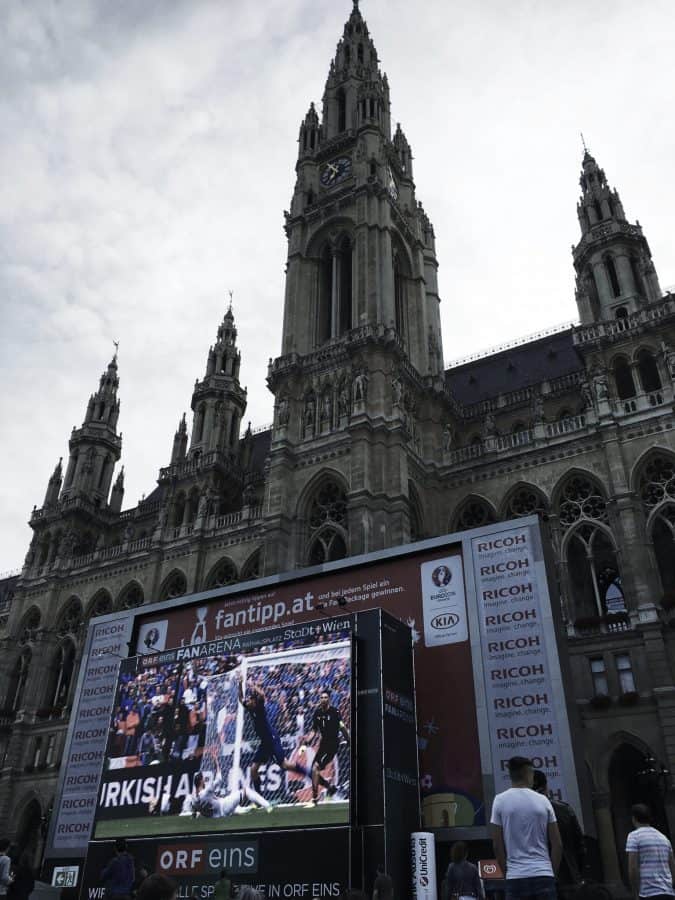 After dinner, I took the train to Schönbrunn Palace and was surprised to find massive hoards of people going in it’s direction. I later found out that I’d gone at the exact time a Pink Floyd concert was being held there, so I wasn’t able to see much of the Palace. It was comforting seeing all the Pink Floyd fans and realizing how international music is and how easily it can connect people of different cultures and backgrounds. 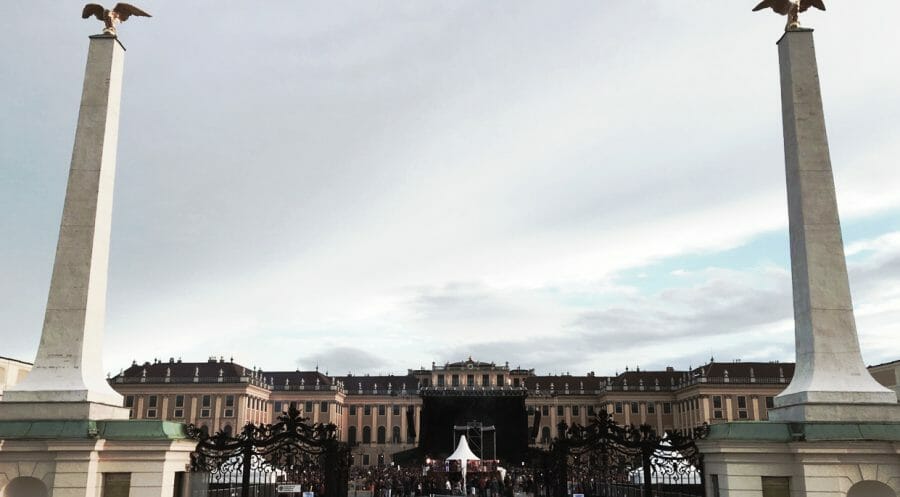 At night, I went back to the Prater and took a ride on the Wiener Riesenrad, also known as Vienna’s Big Wheel. It was completely dark by the time I got there and when I got to the top of the wheel, I was able to see the beautiful city of Vienna illuminated by countless twinkling lights, a great ending to my 24 hours in Vienna. 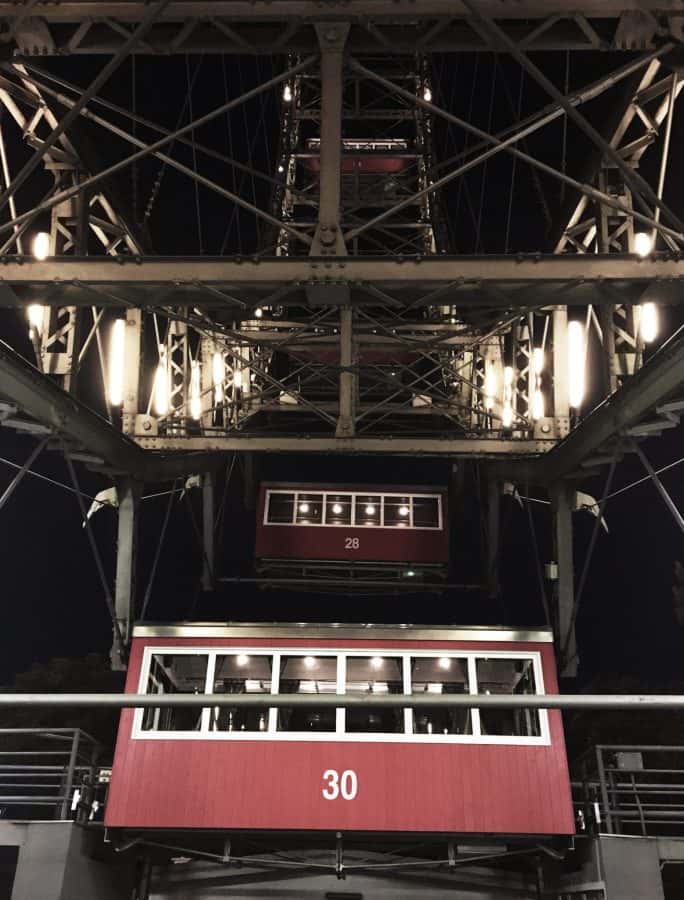 Unfortunately, I didn’t have time to see Hofburg Palace during my 24 hours in Vienna because it was farther from the rest of the attractions. I also wasn’t able to see the Belvedere Palace because I ran out of time, but I’ve heard great things about both and will definitely save them for my next visit there.