3 Day Trip to the Sahara Desert With Marrakech Desert Trips 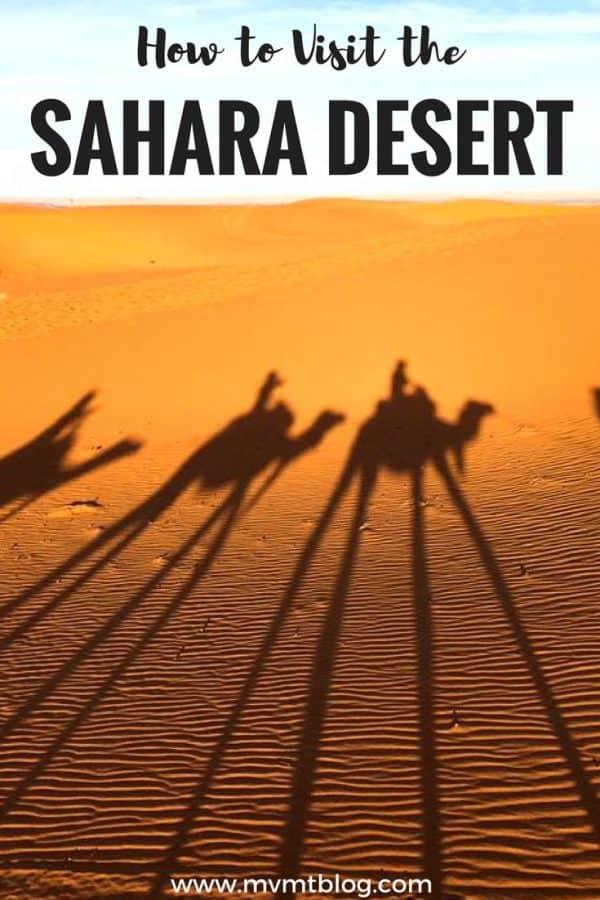 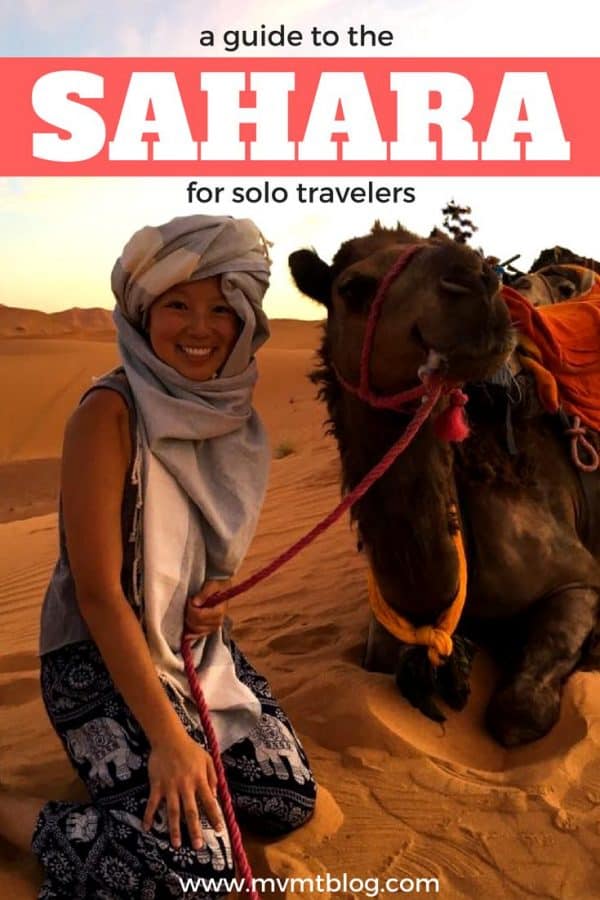 Visiting the Sahara Desert has been on my travel bucket list for as long as I can remember. That’s why, when I took an impromptu trip to Morocco in May 2017, I made sure to plan my trip around a desert excursion. I booked a shared 3 day trip to the Sahara Desert with Marrakech Desert Trips and was not disappointed. Riding a camel through the golden sand dunes of the Sahara and sitting outside at night gazing up at the millions of stars in the sky are not things I get to experience on a regular basis. This was easily one of the most memorable things I’ve ever done, and Marrakech Desert Trips made that possible. 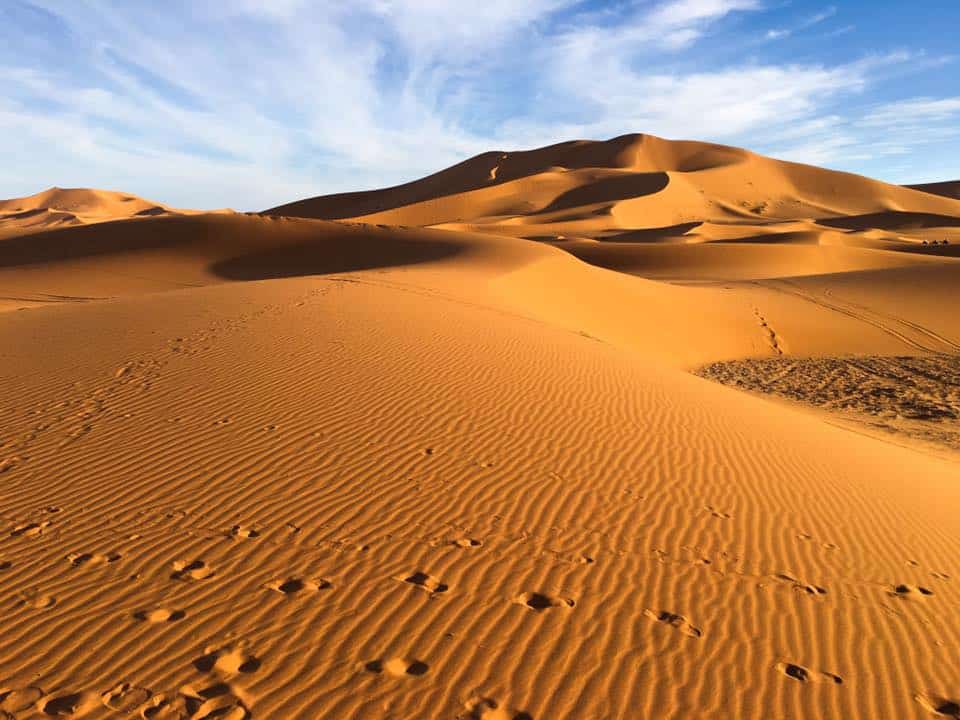 The sun shining down on the golden dunes

Since I was traveling alone, I wanted to join a group on my trip to the Sahara rather than take a private tour. Much to my surprise, most of the companies offering Sahara tours from Marrakech only offer private tours, which usually cost around 300-400 euro. Marrakech Desert Trips is the only company I found that offers group tours for up to 17 people at only 169 euro for a solo traveler. Not only would I have the opportunity to meet fellow travelers from around the world, I would only be paying a fraction of what I would pay through any other company. By the end of the trip, I became friends with everyone from my group, which consisted of solo travelers, couples, and small groups of 3-4 people from the United States, Portugal, Netherlands, United Kingdom, and Malaysia. 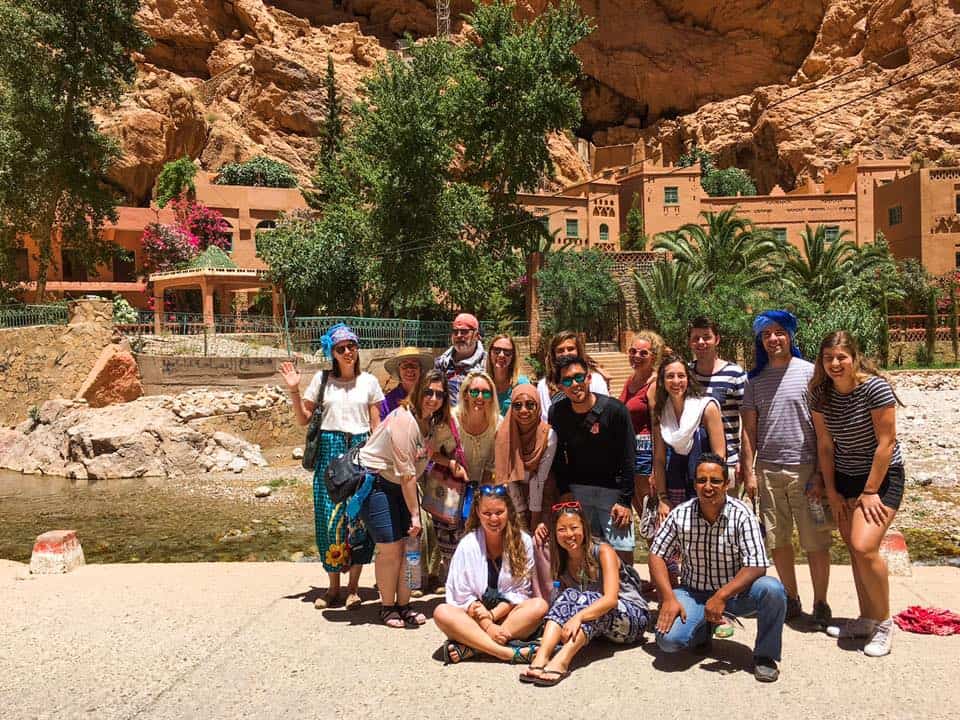 The whole group with our driver, Aziz

While it is possible to drive to the desert on your own and arrange your own accommodations in the Sahara, I would strongly recommend booking a tour if it is your first time in Morocco. The roads from Marrakech or Fes to the Sahara are often unpaved, narrow, and winding. Traffic rules and customs in Morocco may be different than what you are accustomed to in your home country. Streets are not always labeled very well, and it is difficult to get cell phone reception in the mountains and desert to look up directions. There are also frequent police checkpoints along the way which may be confusing to navigate if you are not familiar with the area and do not speak Arabic or French. Finally, it will take you much longer than you anticipate to drive from point A to point B, which can be frustrating and throw off your plans.

Marrakech Desert Trips offers several different group tours to the Sahara. The one I took was the Marrakech to Fes Desert Tour, which picks up in Marrakech and drops off in Fes. If you are interested in seeing several different cities during your time in Morocco, this tour is a great way to get a free ride from Marrakech to Fes through the Sahara. Alternatively, if you plan to be based in Marrakech or Fes, you can opt to take a tour that picks up and drops off in either of those cities. I recommend using the itinerary provided on Marrakech Desert Trips’ website as a rough guide for what to expect and not as an exact itinerary, as my driver made some derivations from the itinerary listed on the website. 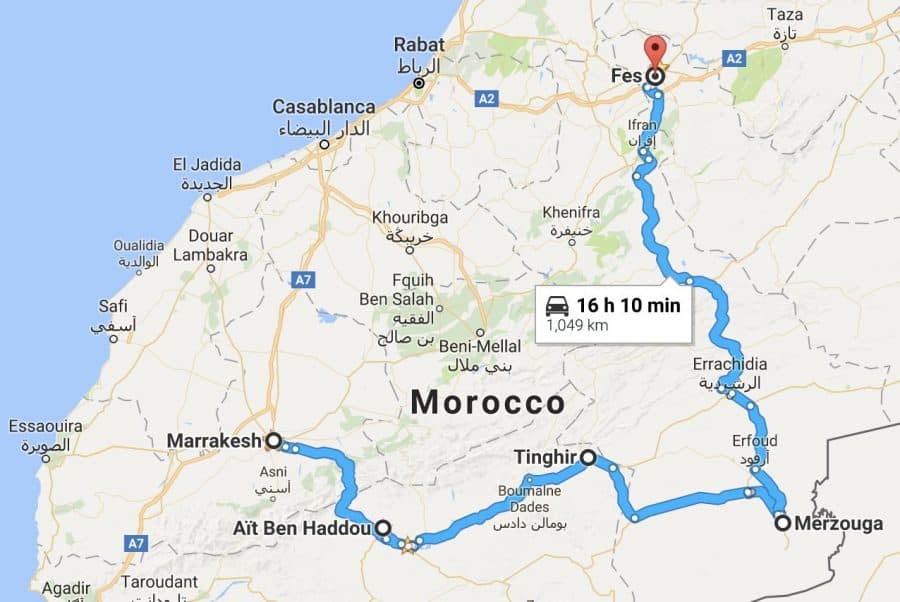 I was picked up from Jemaa el-Fnaa, the main square in Marrakech, promptly at 7:05 AM in a large 17-passenger tour bus. After making several more stops in Marrakech, we were on our way east toward the Atlas Mountains. In addition to the stops highlighted below, our driver made several stops at scenic spots along the way to give us a chance to get off the bus, stretch our legs, and take photos of the beautiful landscape. 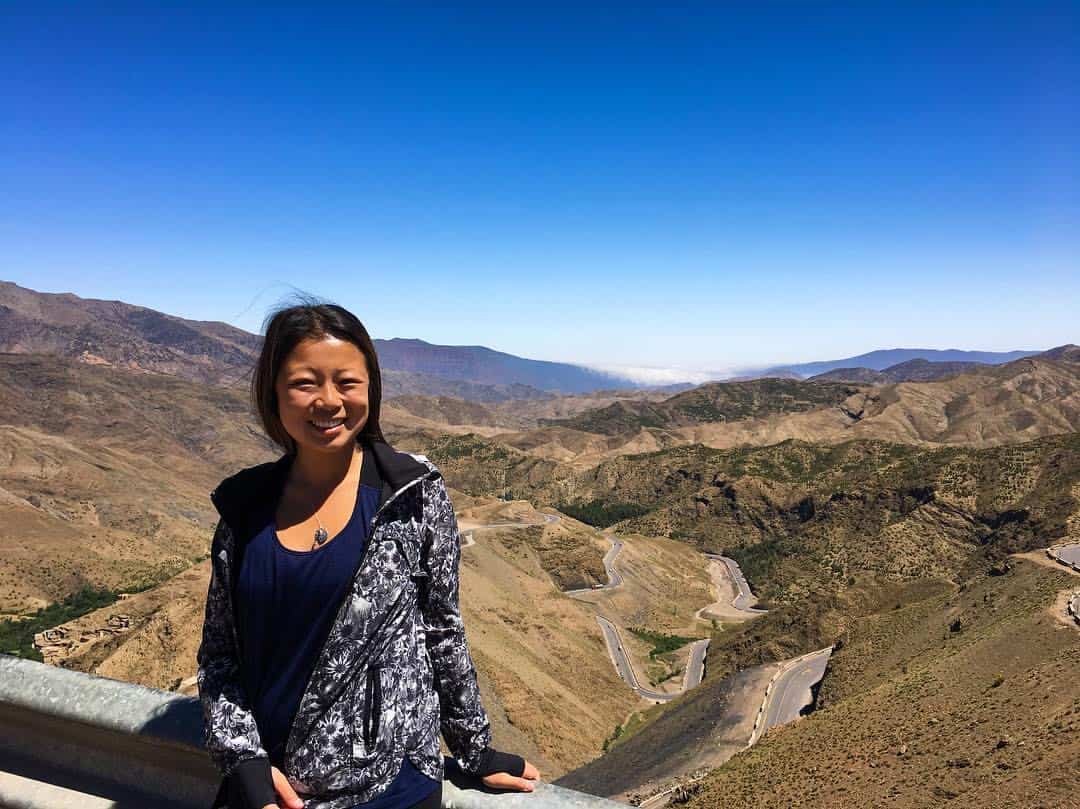 A scenic stop in the Atlas Mountains

Our first stop was in a walled city, or ksar, called Aït Ben Haddou. Formerly used as a trading post between other north African countries and Marrakech, it is perhaps most well known today as a filming location for popular movies and TV shows such as The Gladiator, Prince of Persia, and Game of Thrones. Aït Ben Haddou has been a UNESCO World Heritage site since 1987, and today, only eight families remain in the old city area of the ksar. The rest of its original inhabitants have moved away to larger cities, such as the neighboring city of Ouarzazate (pronounced WAH-zah-zaht) or as far as Marrakech. At the conclusion of our tour, we were led to a restaurant just outside the old city where we had lunch. 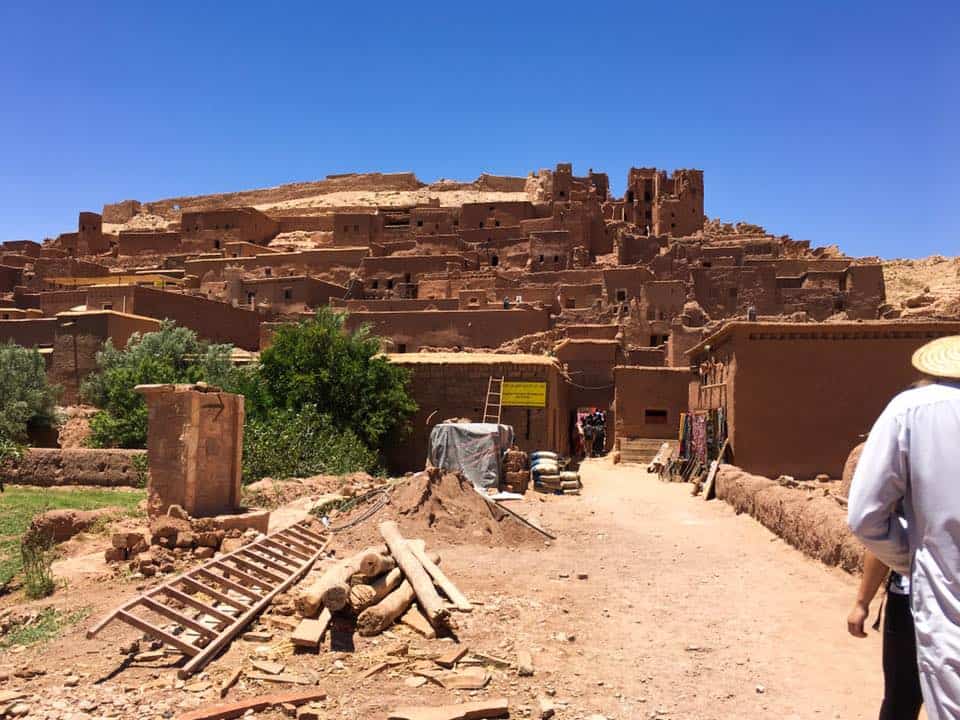 Aït Ben Haddou, where many famous movies and TV shows were filmed

I note that while Marrakech Desert Trip’s website states that hiring a tour guide at Aït Ben Haddou is optional, that was not the case when I arrived. We were greeted by a tour guide as soon as we got off the bus, and there did not seem to be an option to wander off on our own. The guide asked us to pay at the end of the tour, and we were not made to feel that we had another option. As a general rule of thumb, everyone expects you to pay for everything in Morocco, so just keep that in mind and be prepared to tip or pay for any bit of small help that you may receive. 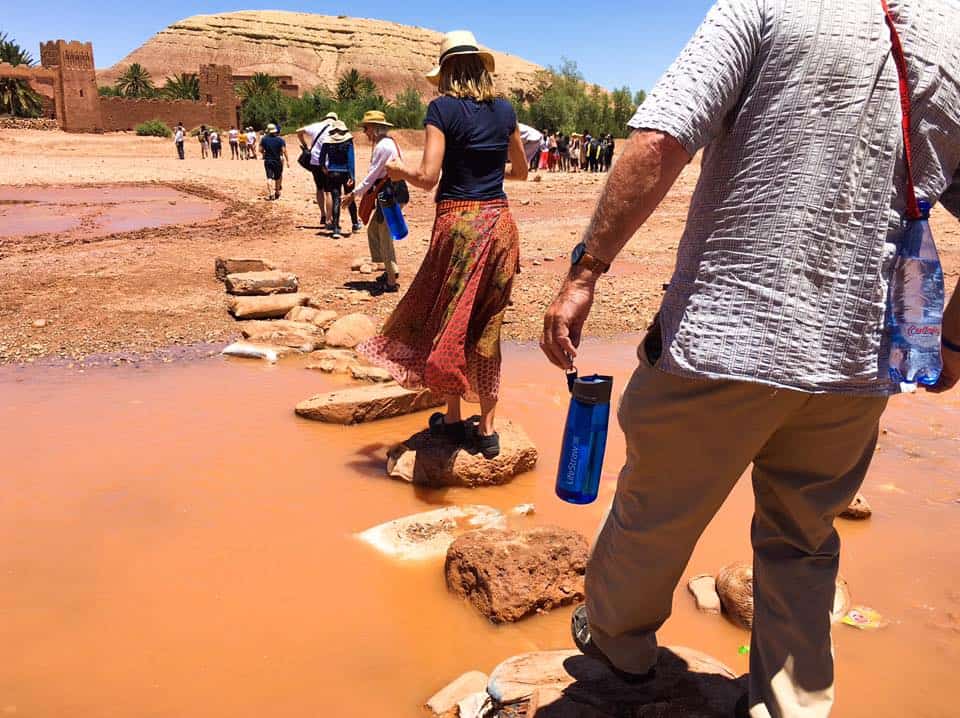 That night, we stayed at a beautiful hotel in the Atlas Mountains called Hotel Vieux Chateau. Nestled in the Atlas Mountains, Hotel Vieux Chateau was the perfect place to enjoy one of Morocco’s most beautiful landscapes. We took advantage of the multiple outdoor terraces to get some fresh air and enjoy the views. Although the rooms were well equipped with mosquito nets, many of us still received multiple mosquito bites that night, so I would recommend bringing mosquito repellant on this leg of your trip.

After getting a good night’s sleep at Hotel Vieux Chateau, we started the second day early with breakfast at the hotel at 8:00 AM. The main attraction we saw on our second day was Todgha Gorges, or the “Grand Canyon of Morocco,” as the locals called it. Todgha Gorges is located along the Tinghir River near the town of Tinerhir. Although Todgha Gorges was not quite at the same magnitude as the Grand Canyon, it was quite impressive. You can take a dip in the river Tinghir, which feels extremely refreshing in the scorching Moroccan heat. 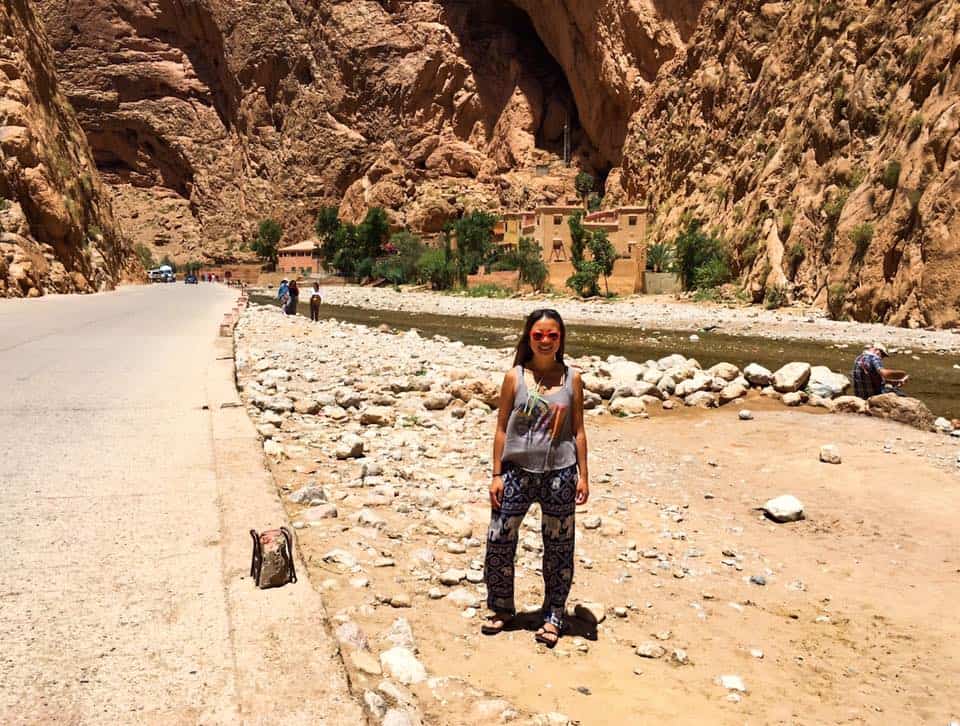 Finally, we were off to the Sahara desert. We arrived in the afternoon at around 3:00 PM and headed to a hotel near the entrance of the Sahara, where we rested while waiting for our camels and guides to arrive. We were told to pack a day pack to bring with us to our desert camp, and to leave the rest of our belongings on the bus. Although I knew I would be given a room upgrade in the desert, I did not expect to have a place to shower, so I packed only my basic toiletries and no change of clothes. However, when I arrived at my “glampsite,” the brand new Sahara Stars Camp, I found the accommodation to be not only nice but quite luxurious. In fact, it was one of the best accommodations I stayed in during my time in Morocco. I had my own cabin with a bed, toilet, and shower, whereas the typical accommodation features shared rooms, a shared toilet, and no shower facilities. For this reason, I would highly recommend paying for a room upgrade. It will make your stay much more comfortable and your experience that much better. 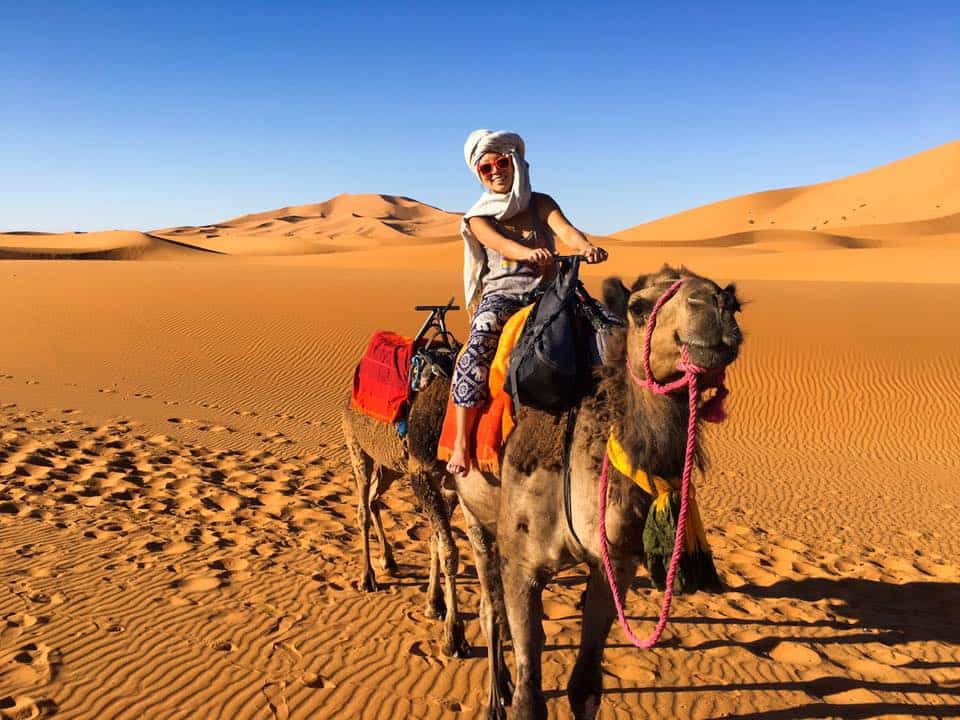 Trekking by camel to my glampsite

Since I was the only person in my group with the room upgrade, I was separated from my group and taken to a different campsite by camel. Although I was sad to leave my group, who I had become well acquainted with and quite comfortable around, that sadness quickly dissipated when I arrived at Sahara Stars Camp and saw how beautiful the accommodation was. 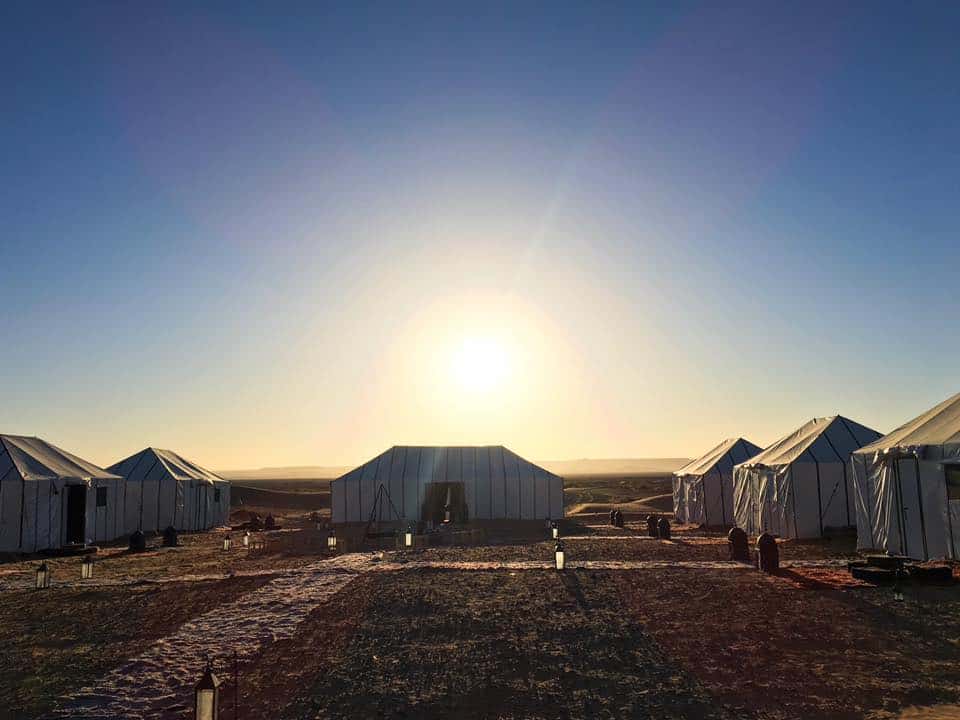 The camel ride to Sahara Stars Camp took about 40 minutes, and we stopped several times along the way to take photos and enjoy the sunset. Our guide seemed to know all the best places for photos, and he even advised me on where to stand and how to pose. Getting on and off the camel was a bit challenging at first, but I quickly acclimated and felt comfortable taking photos on my phone instead of holding on tight with both hands while sitting on the camel. 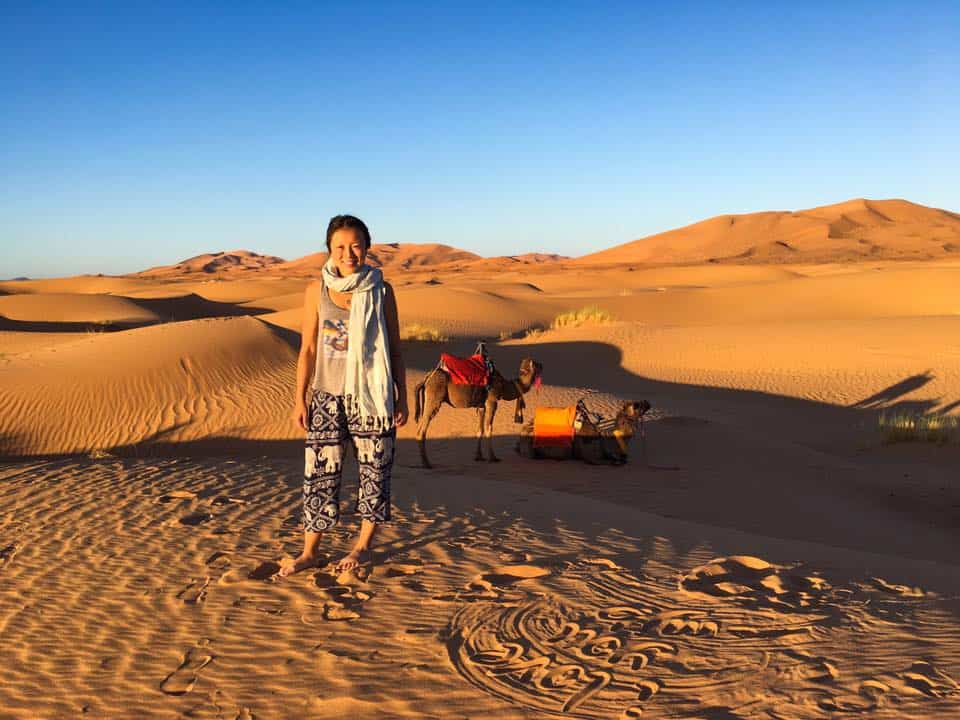 Camels taking a rest while we took some photos 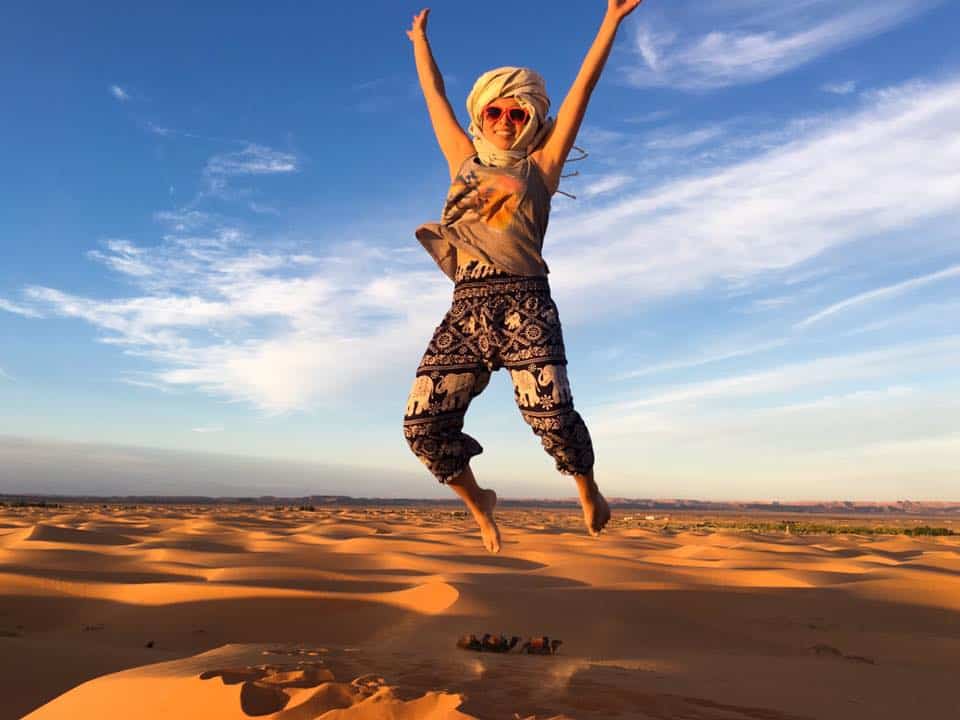 My new camel friend and me

The shadow of our crew at sunset

Upon arrival at Sahara Stars Camp, I was given a refreshing Moroccan mint drink and treated to a 4-course dinner. Afterwards, we turned off the lights at the campsite to enjoy the stars, and we sat around the fire playing drums, dancing, and singing. I had never seen so many stars in my life and will remember that moment forever.

The next morning, I had to leave the campsite at 6:00 AM to rejoin the group back at the hotel we started at. A few people from our group had a flight to catch in Fes that afternoon, so we needed to leave early to ensure they did not miss their flight. We were divided into several minivans and transported to our respective locations. We stopped several times along the way for lunch and bathroom breaks, but otherwise we drove straight from the Sahara to Fes.

If you’re looking for a Sahara trip from Marrakech or Fes that won’t break the bank, you’ll want to book a shared 3 day trip to the Sahara Desert with Marrakech Desert Trips. 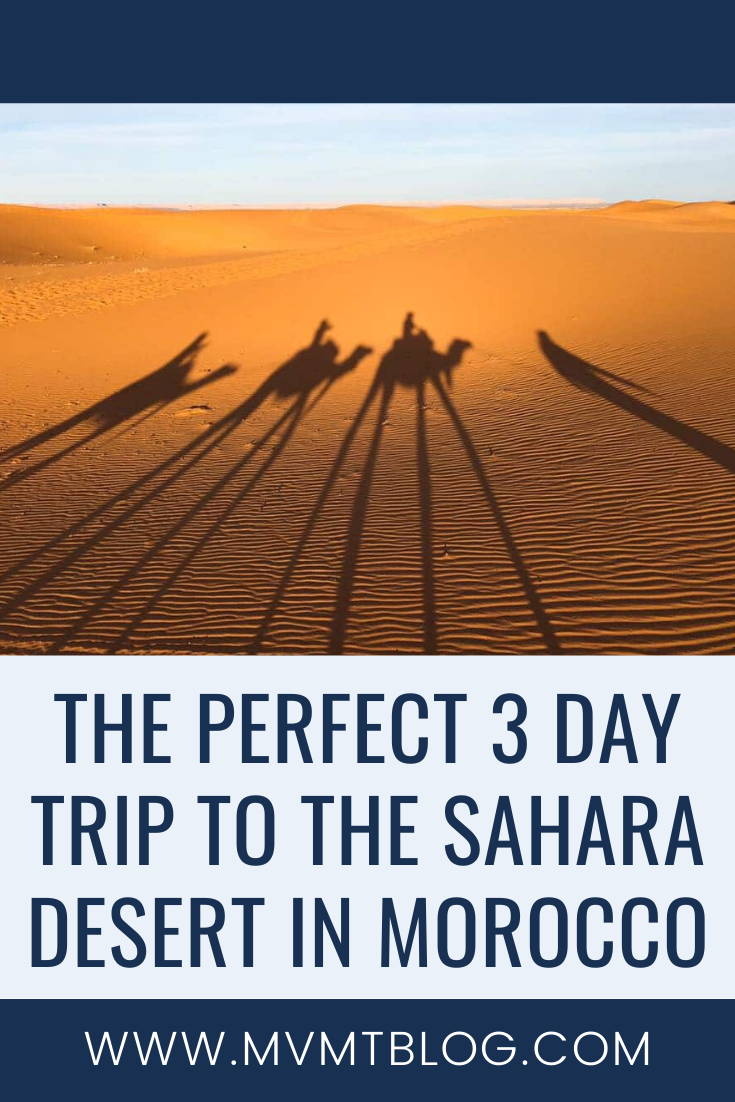 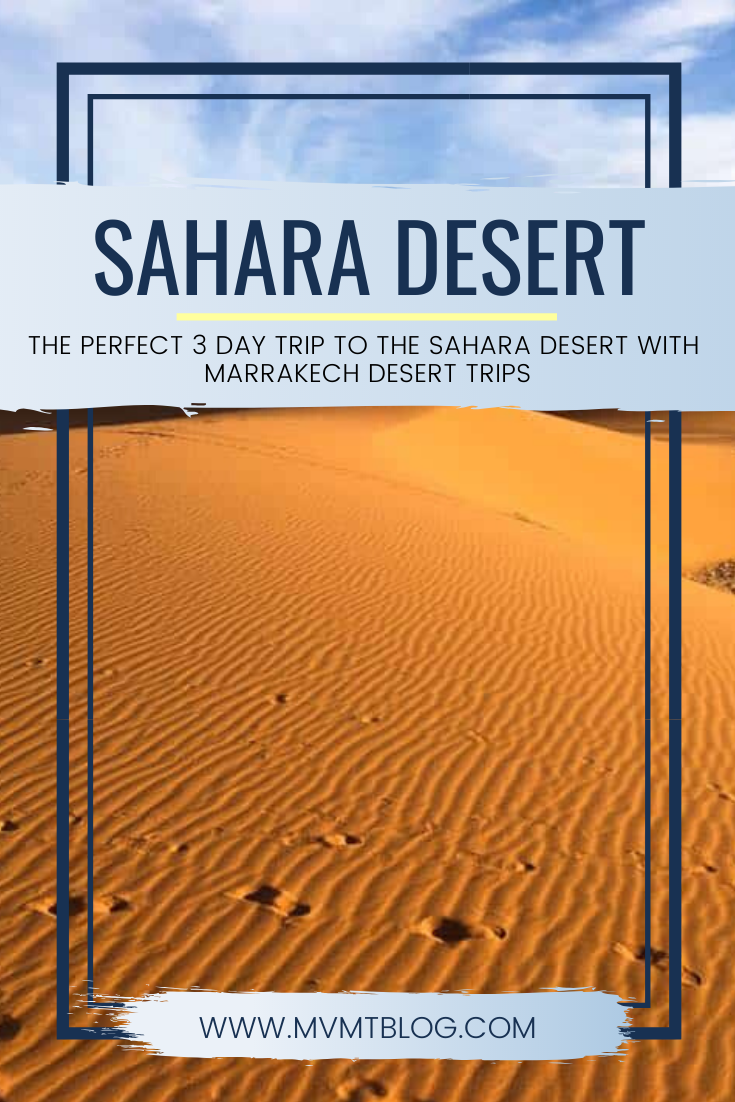 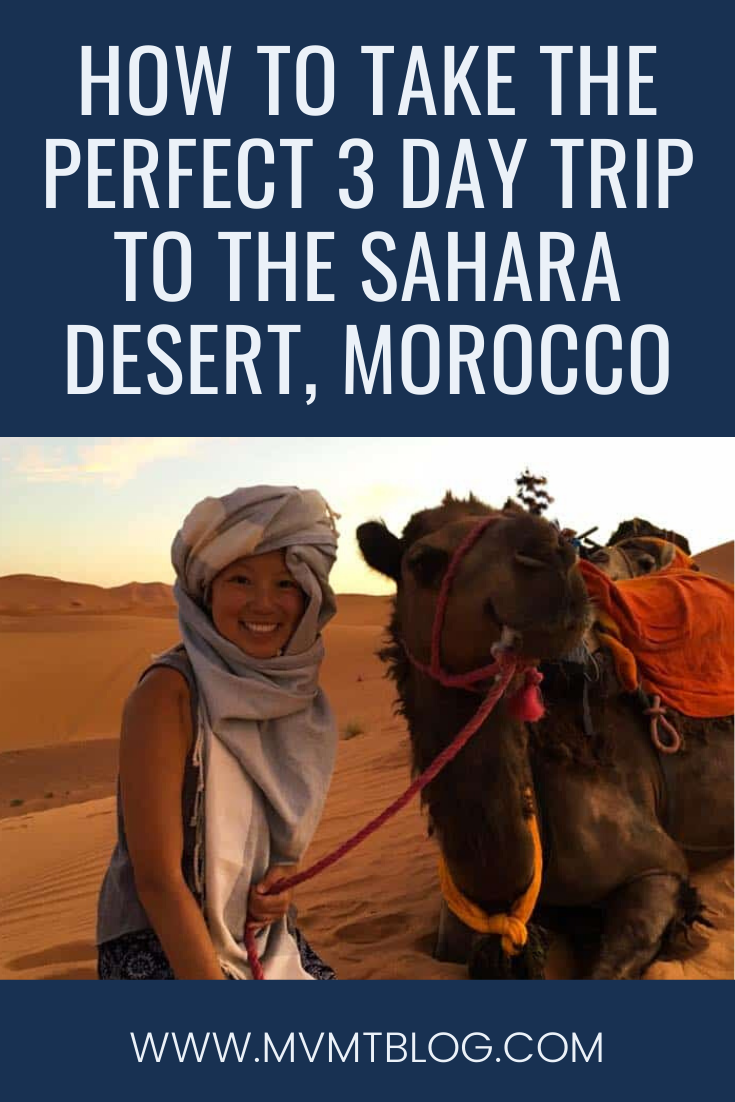 A big thank you to Marrakech Desert Trips and Sahara Stars Camp for making our stay possible. As always, all opinions are 100% our own.