A couple of my favorite things to do while traveling are tasting the local cuisine and experiencing the local culture. Thus, it is no surprise that the first thing I did when I visited Rome last month was fully immerse in Roman culture with The Roman Guy’s Local Foodie Tour in Trastevere, the hippest of neighborhoods in Rome. Throughout the tour, I felt like I was hanging out with an old friend in Rome while being taken to the coolest local spots.

Our tour of the Trastevere food scene began with some history at our meeting point, Piazza Farnese. Fiona, an Aussie who has spent more of her life in Italy than Australia, introduced herself as our tour guide and gave a brief history on the piazza (plaza or square). The piazza is dominated by the Palazzo Farnese, pictured below. Construction on the palace started in 1514 with designer Antonio da Sangallo the Younger and continued with Michelangelo after Antonio da Sangallo passed away in 1546. In the 18th century, the French embassy moved into the palace, and as of 2012, the palace is open to the public for tours. 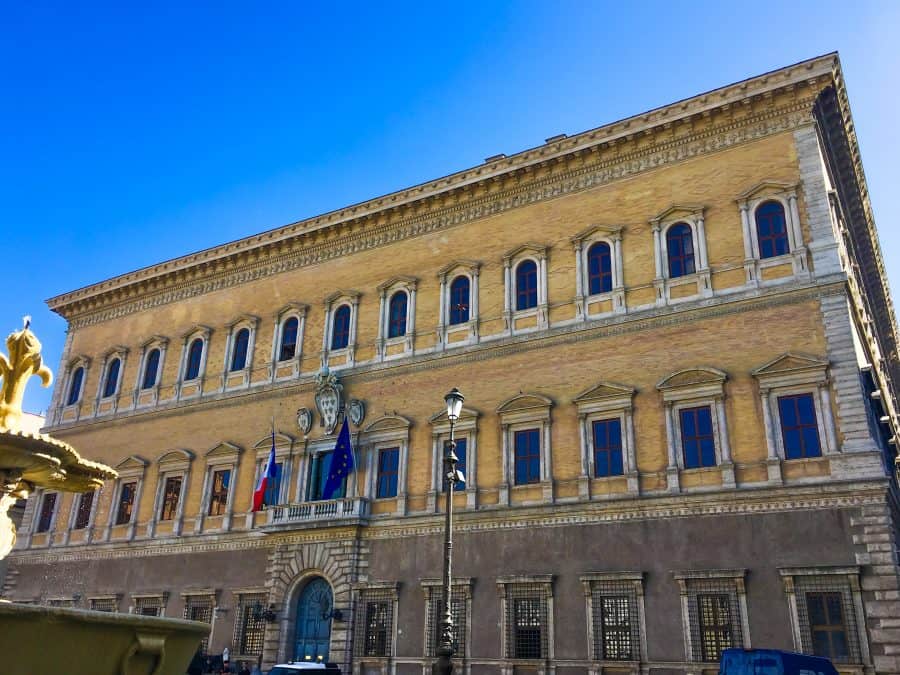 Our first stop was a local cheese shop that is so local it doesn’t even have an official name. Locals refer to it simply as “Paolo and Johnny’s cheese shop,” for the owners, Paolo and Johnny. This family run shop has been around for 35 years and sells just about every type of cheese you can imagine.

We had the pleasure of tasting eight different cheeses here: a burrata, two types of mozzarella (one made from water buffalo milk and one made from cow’s milk), two types of pecorino (one with saffron and one that was aged for 10 months), a cow’s milk cheese from northern Italy flavored with white wine, a pecorino romano, and a parmaggiano reggiano, which is safe for those with lactose allergies. 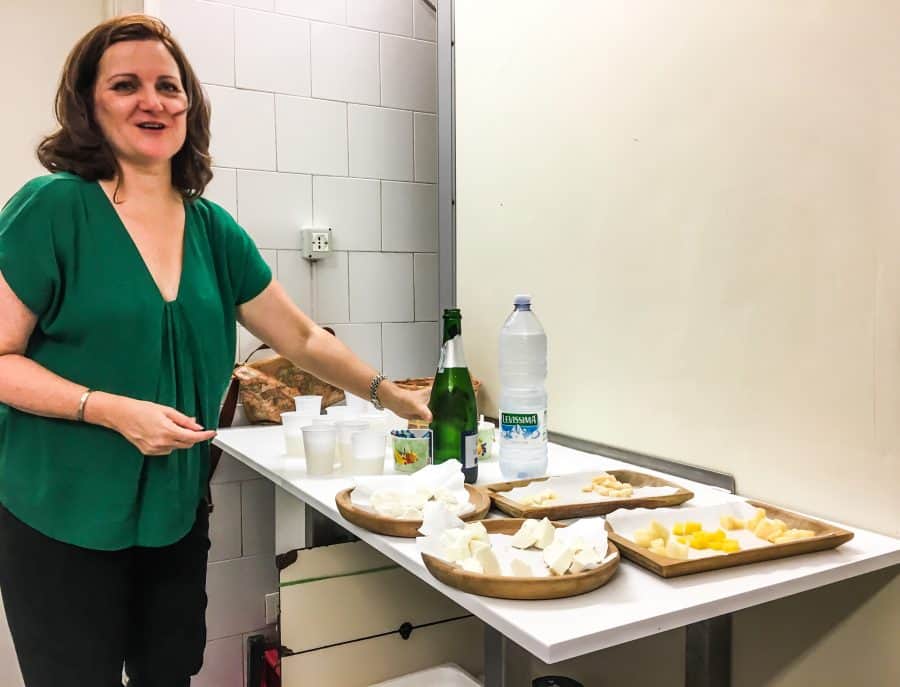 Our wonderful guide, Fiona, serving us cheeses and prosecco at our first stop

While serving us the various cheeses, Fiona also prepared prosecco and water for everyone. The prosecco tasted perfectly refreshing on that hot summer’s day, and I savored each sip. What I didn’t realize then was that, in true Italian fashion, wine would be served at each of the subsequent stops, so any worries of a scarcity of wine were completely unfounded.

On our way to our second stop, Fiona introduced us to the famous Campo di Fiori, where a statue of philosopher Giordano Bruno (born Filipo Bruno) stands. Bruno was executed in this square back in 1600 for believing in the trinity. Consequently, this is the only square in Rome without a church. However, Bruno’s death was not for wrought; today, he is revered by locals as a champion of thought. 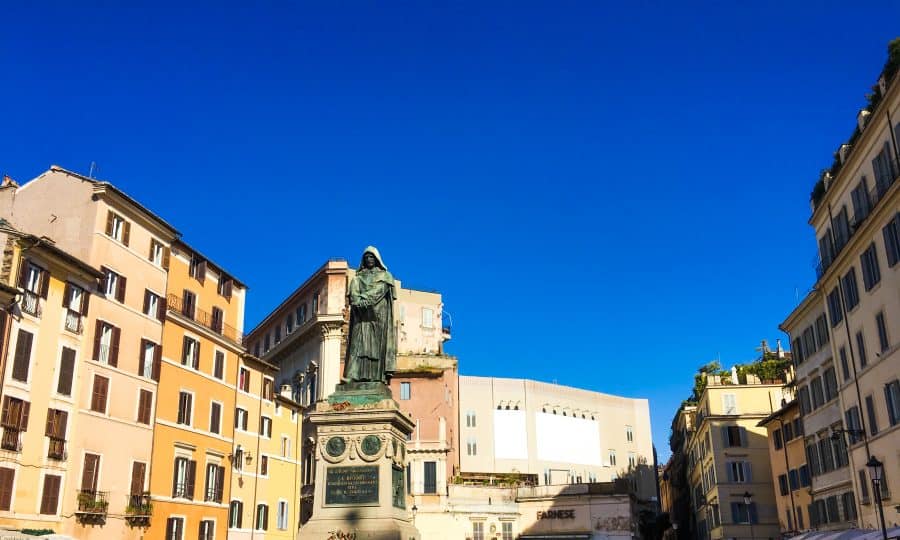 Soon we arrived at Largo dei Librari and found ourselves standing in front of the second stop on our food tour of Trastevere: a baccala restaurant called Filetti di Baccala. Baccala is a salted fish borrowed from the Norwegians that is typically breaded and fried (if served as a street food) or pan fried (if served in a restaurant). As Filetti di Baccala serves only baccala, the restaurant has really made itself an expert in preparing baccala. However, if you are not a fan of baccala, this may not be the ideal meal destination for you, as you won’t find much on the menu that’s not baccala. I am a big fan of fish and seafood and found the baccala at Filetti di Baccala to be perfectly seasoned and fried and would absolutely return here on my next trip to Rome. 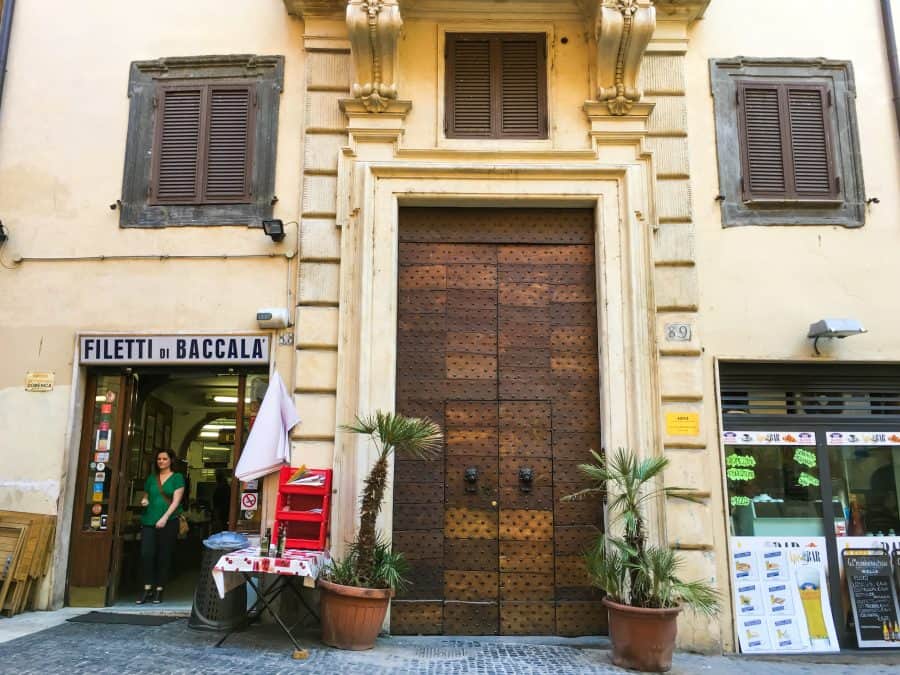 After filling our stomachs with salty fish, we headed over to cleanse our palettes at the third stop on our Trastevere local foodie tour, a farm to table restaurant called Tastevere KmZero (a play on words of Trastevere). Here, we sampled some bread with chicory and swiss chars, bread with eggplant, sausage and prosciutto, and organic wine. The mixture of chicory and swiss chars was a new taste for me, and I quite enjoyed it. Although it seems like there is a lot of meat in Italian cuisine, with its abundance of prosciutto and sausage, it is actually quite easy to be vegetarian in Rome as there is also an abundance of farm fresh vegetables. Fiona noted, however, that while it’s easy to be vegetarian in Rome, rarely will you find a local who is actually vegetarian. As a big meat eater myself, I can’t say I blame them. 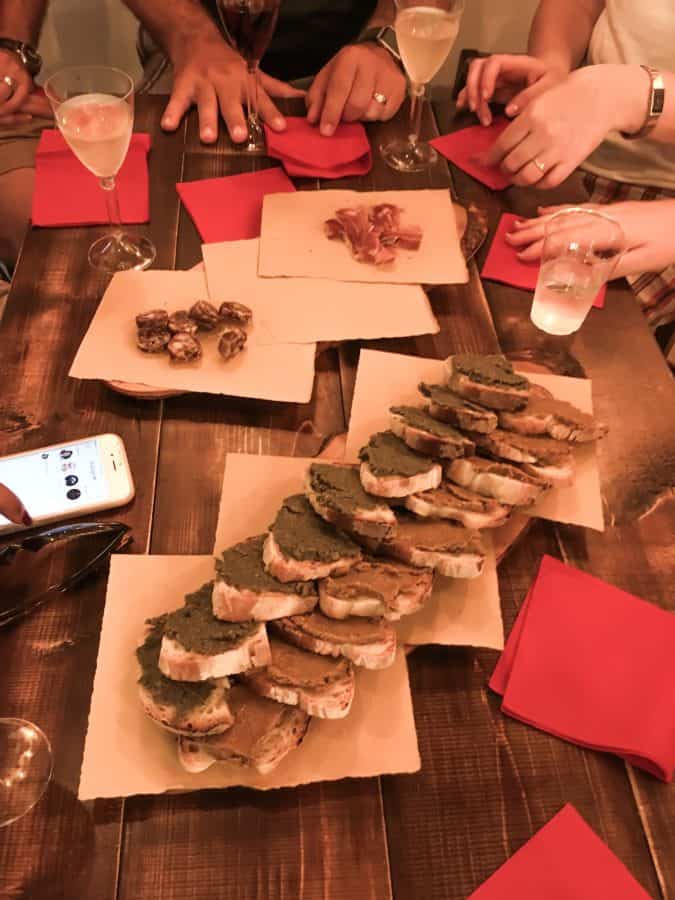 After refreshing our bodies with some farm fresh foods, Fiona led us to a local pizzeria where we saw authentic Italian pizza being prepared. Although this was only meant to be a quick viewing stop, I gave in to my overzealous taste buds and bought a large slice of pizza for 2 euro for the road. The pizza was delicious, but I was starting to question my decision to indulge in such a large slice of pizza when I was already starting to feel full and we still had two more stops left.

When we reached our fourth stop, Bacco in Trastevere, I knew I was in trouble. The waiters brought out big boards of bruschetta with tomato and olive oil and served each person his or her own plate of pasta with cacio and pepe (cheese and pepper). As someone who has lived her whole life struggling to leave food on the table, I somehow mustered up the energy to finish my entire plate of pasta and taste some of the bruschetta. A food lover’s biggest weakness is food, and my weaknesses really showed through that day. 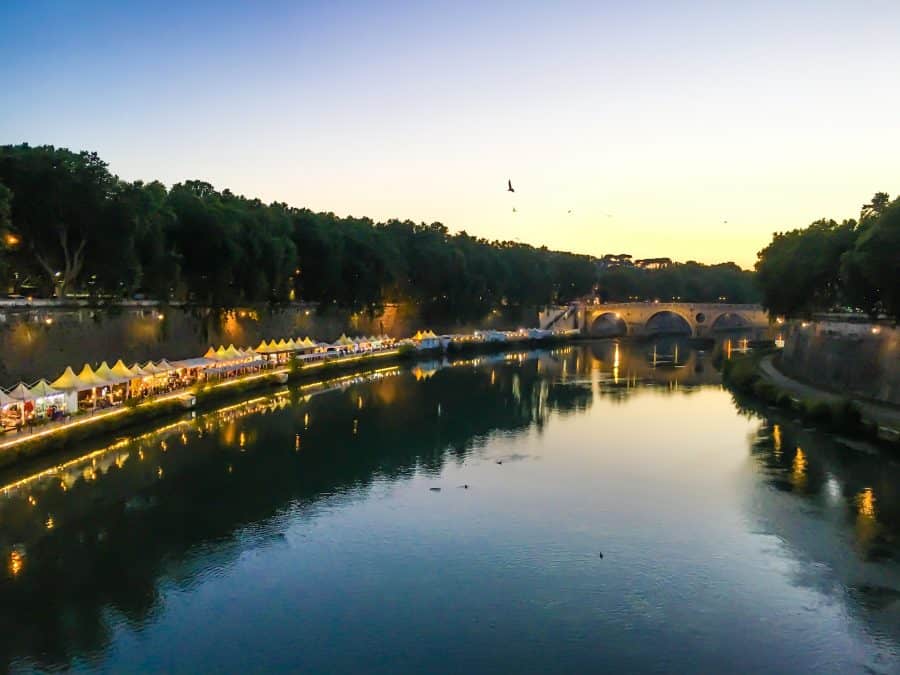 View over the Tiber River at night

Luckily we had a bit of a stroll to the final destination on our Trastevere locals foodie tour, which allowed me some time to digest before dessert. Fiona brought us to her favorite gelato shop in Rome, Gelateria del Teatro. This local spot is rarely overcrowded like many of the more touristy gelato shops in the city and equally – if not more – delicious. Fiona gave us a quick rundown of the flavors, including which flavors are most popular amongst locals. As it sounded like pistachio was a popular local flavor and I had never tried pistachio gelato before, I knew that would be my selection.

Anyone who knows me knows that ice cream/gelato is one of my favorite foods, and I am particularly good at making excuses to get my hands on some while traveling (i.e. it’s vacation, will resume my healthy diet upon returning home, etc.). Thus, despite being stuffed to the brim, I happily ate a cup of pistachio gelato while planning my return for the next day. 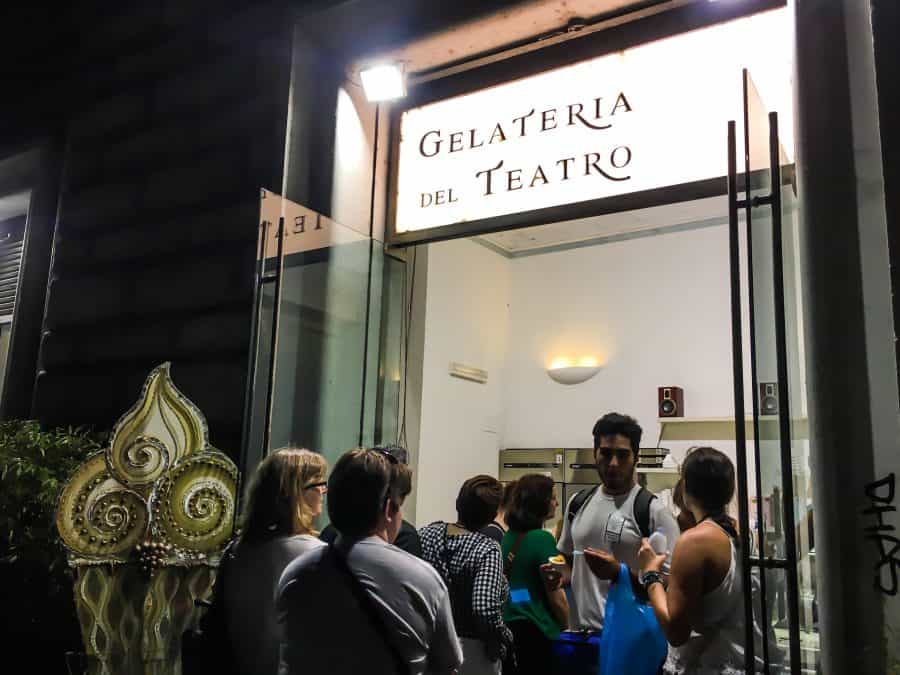 The Local Foodie Tour in Trastevere was the best way for me to not only satisfy my taste buds but to fully immerse in local culture in Rome. Following Fiona around the city felt like hanging out with a local friend who wanted to show me around all the cool spots in town.

The Roman Guy also has food tours in Florence and Venice, as well as wine and cocktail tours throughout Italy. Be sure to check The Roman Guy’s website for a full listing of all its food and drink tours before your next trip to Italy!

If you love trying new foods from around the world as much as we do, then you’ll love these food tours: 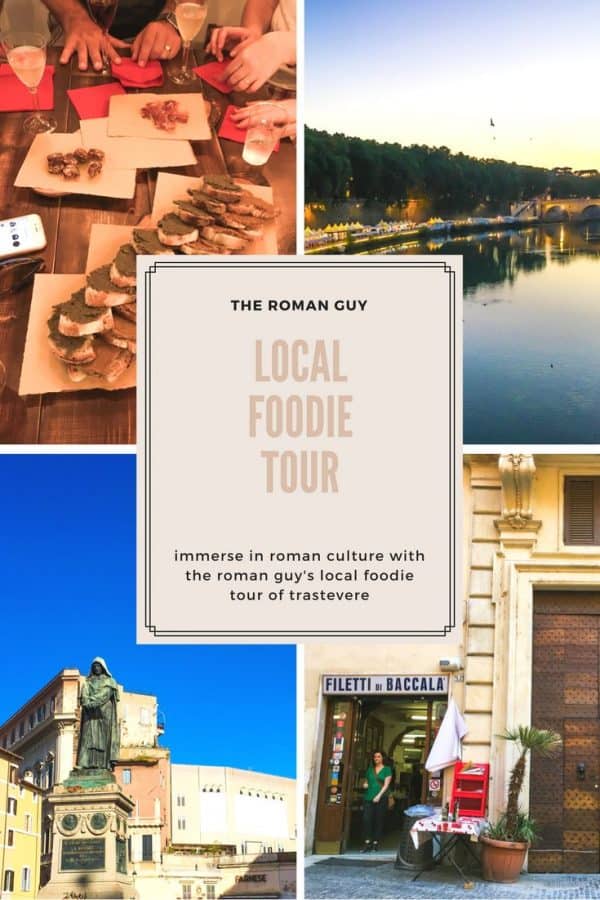 A big thank you to The Roman Guy for making this tour possible for us. As always, all opinions are 100% our own.