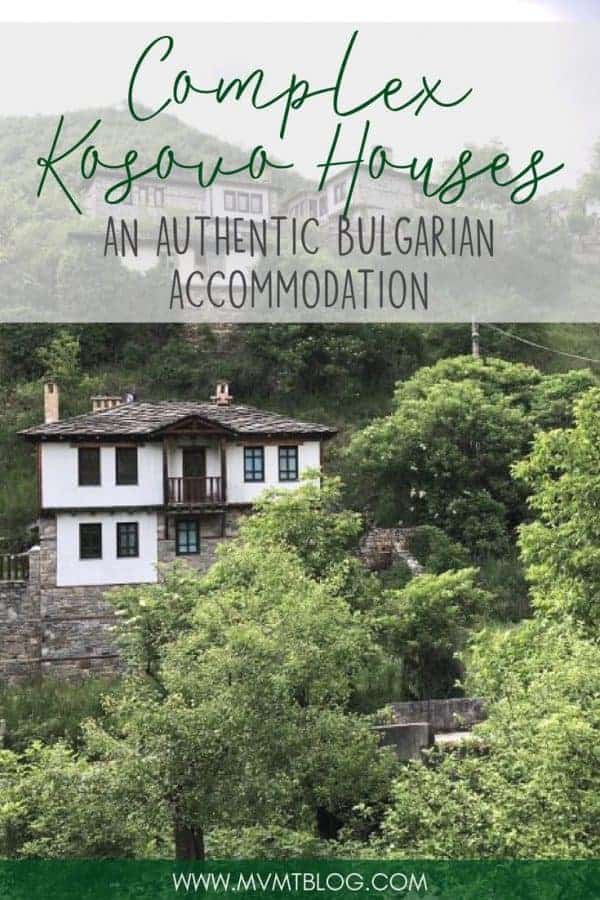 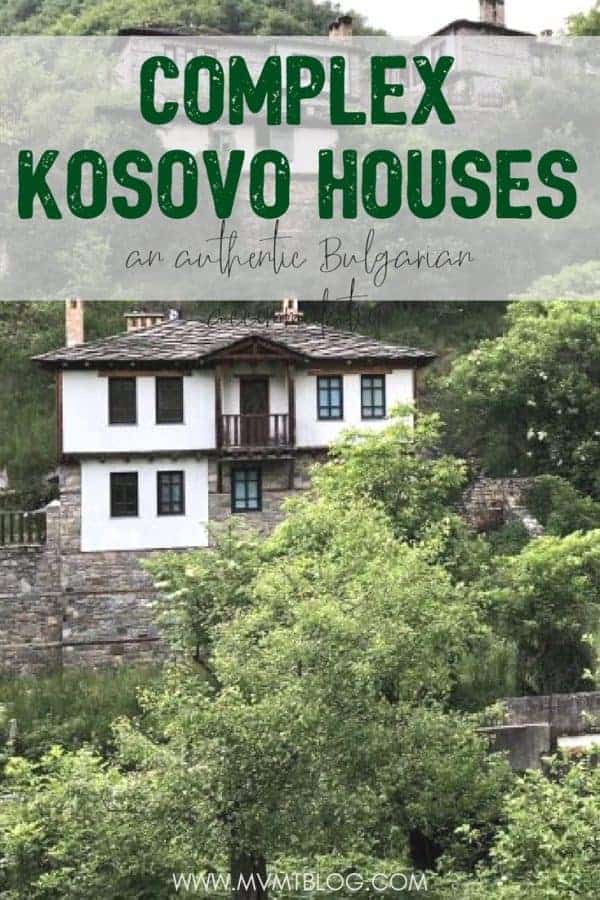 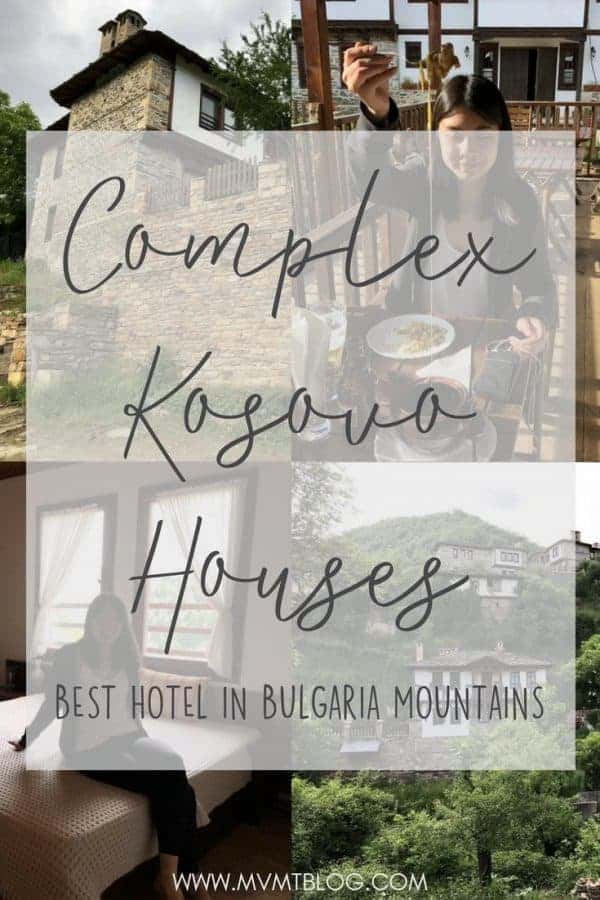 Kosovo, a village in Bulgaria (not to be confused with the more famous Kosovo in the Balkans) is a small, picturesque Rhodope mountain town that Diana and I visited during our journey through Bulgaria. We found an authentic Bulgarian accommodation at the Complex Kosovo Houses, a group of family-run houses designed, built, and renovated in a typical Rodopi architectural style. The complex is located approximately one hour away from Plovdiv by car and less than three hours from Sofia, but alternatively, guests can bus to Narechenski Bani from Plovdiv and get picked up there by the friendly staff at Kosovo Houses. If you’re looking for an authentic Bulgarian accommodation in the Rhodope mountains, look no further than Complex Kosovo Houses. 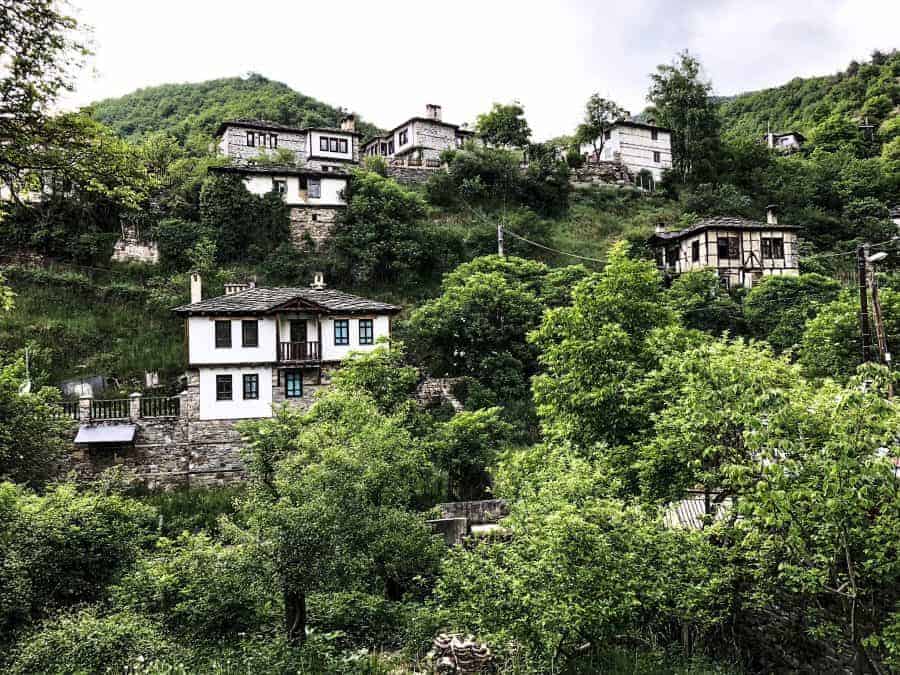 The complex consists of three houses and one restaurant, and is located within a 10 minute walk to the chapel and central village of Kosovo. Our room was in the Hadjiyska House, the main house located right next to the restaurant. The other two houses are located on different hills, a short walk from the main restaurant/guesthouse area. Even though we went during the off-season, we encountered plenty of other guests (mostly families and couples) staying in the rooms, as well as local dogs who greeted us with warm Bulgarian hospitality.

Diana and I were awestruck by the level of hospitality shown to us at Kosovo Houses. Upon arriving at the main house, Svetlana, the wife in the husband-wife duo that owns Complex Kosovo Houses, came out to greet us with the warmest welcome and immediately offered us coffee, tea, and other refreshments. She then showed us to our room on the second floor of the main house and asked us if we needed help with our bags. We had rented a tiny, manual car and hadn’t been able to make it up the hill, so we explained that we had left our bags in our car parked at the bottom of the hill. Upon hearing this, Svetlana’s son offered to either drive our car up or drive his car down to help us pick up our bags. Even though the walk down the hill wasn’t long, he insisted and we happily obliged – we had done enough hiking for the day at that point! 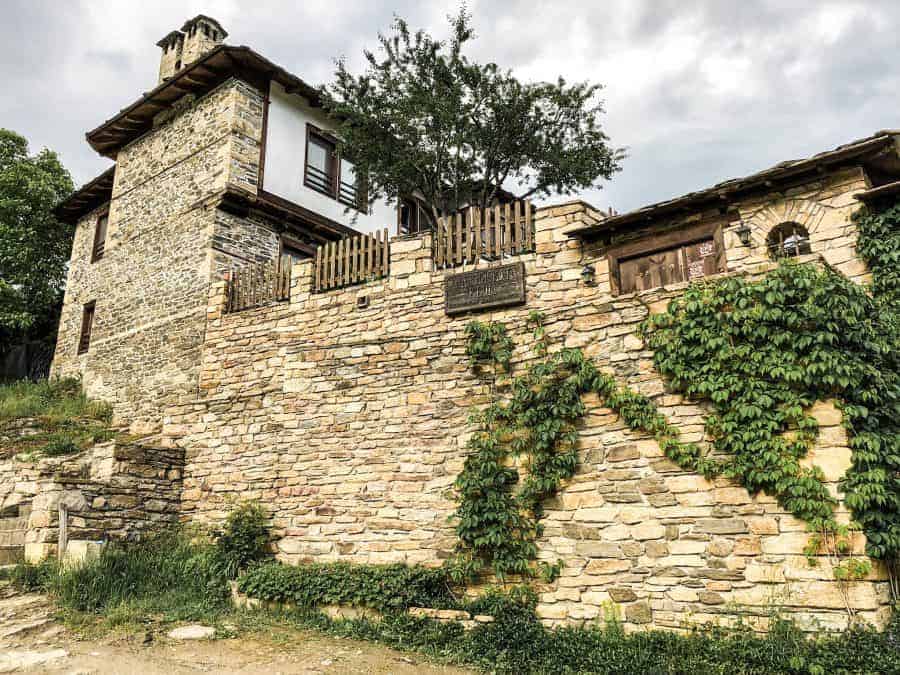 All of this happened in the first five minutes of our arrival, and although I didn’t think it possible, the quality of service only increased from here. Svetlana or another member of the staff was always available in the restaurant for any questions or concerns, and we found them very approachable and helpful. We conversed the most with Svetlana, presumably because of a language barrier with some of the other staff, and loved hearing about her life and the story behind how Kosovo Houses started.

We had read tons of reviews from guests who raved about the food at Kosovo Houses before arriving, and we’re incredibly happy to say that we were far from disappointed. The restaurant at Kosovo Houses was open the entire time we were there – and we were there during times ranging from 8:30 AM to 10:30 PM. At Complex Kosovo Houses, you will be fed homemade, authentic, and delicious Bulgarian food, specifically food that is commonly found in the Rhodopes. 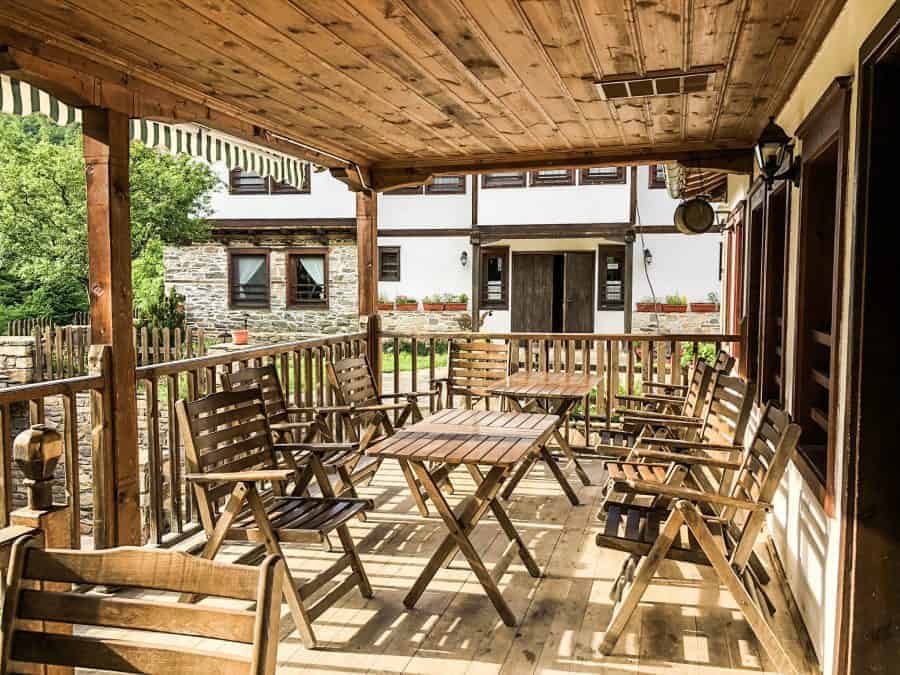 Balcony of the restaurant

We had three meals/snacks at the restaurant – dinner, late-night dessert and tea, and breakfast. For dinner, Diana and I ordered Patatnik and Klopanitsa. Patatnik is a potato dish native to Bulgaria made with onions and Gyosum – it is arguably one of the most famous dishes in the Rhodopes and is a must-try for anyone travelling to the region. The Klopanitsa that we ordered was made with pork, cooked peppers, etc., and topped with a layer of cheese. We would later come to find that Bulgarians use some form of dairy product, usually yogurt or cheese, in essentially every dish they make. Unfortunately, I am lactose intolerant, but the food was too good to resist and I had a full bottle of Lactaid pills on hand. 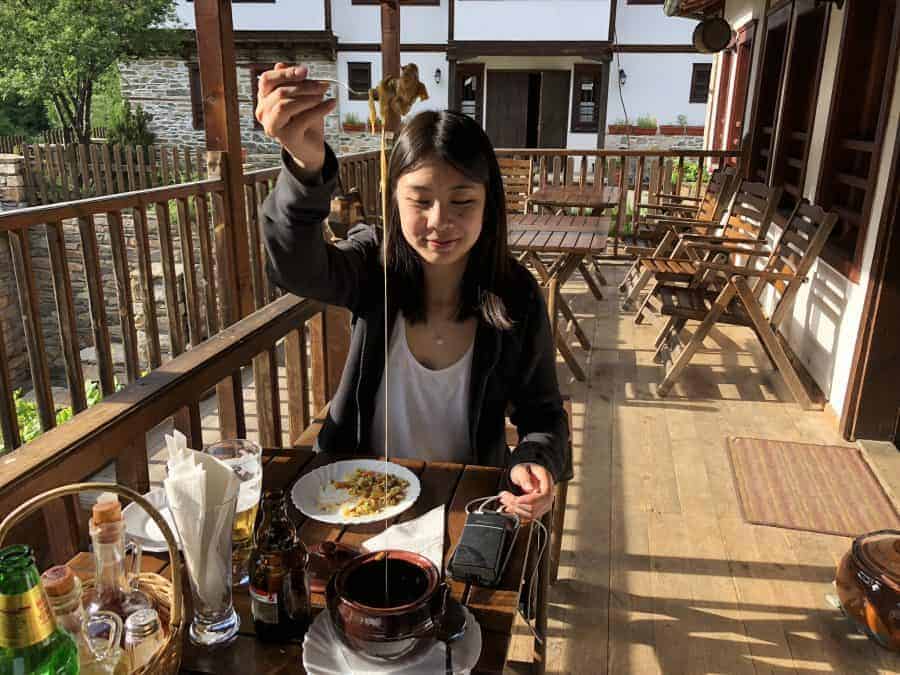 ALL OF THE CHEESE 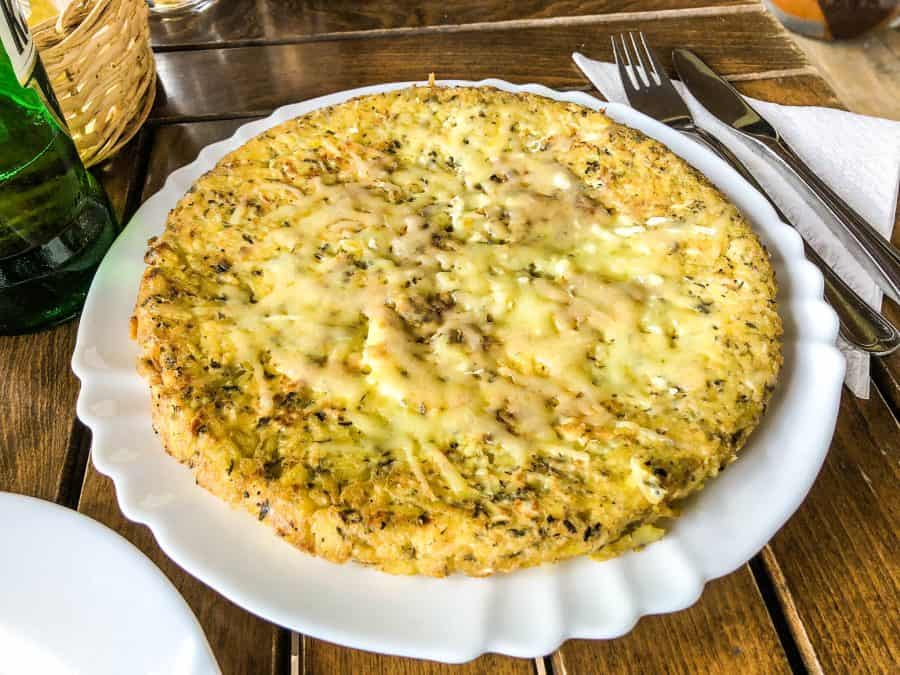 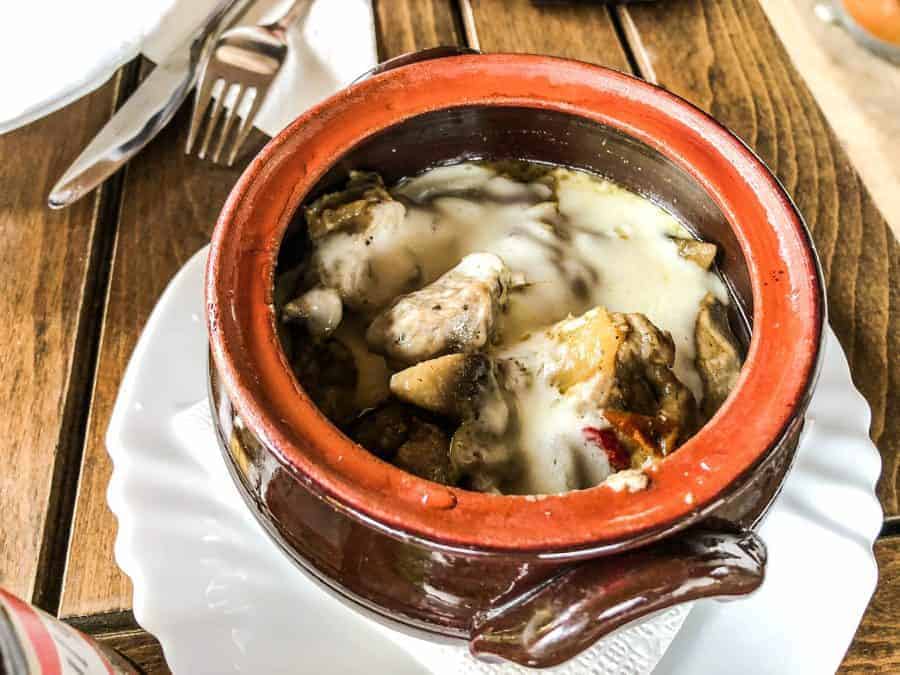 After the walk Diana and I took to digest our dinner, we returned to the restaurant for tea and dessert. Among our options for dessert were various types of yogurt, cake, baklava, and what Svetlana calls ‘Grandma’s Dessert’. She explained that it was a dessert that her grandmother had made for her as a child, and of course, we couldn’t resist trying it for ourselves. The dessert, a chocolate and nutty mixture served with whipped cream, was paired with our tea and served as the perfect way to wind down after a long and tiring day. We were there on a day when another family was having a large reunion, and they had invited a group of traditional bagpipe playing Bulgarian musicians to perform at the restaurant. Unfortunately, we were too exhausted and ended up going back to our room before the bagpipe players arrived, but we heard a sneak preview of their music through our window while they walked from their car into the restaurant. 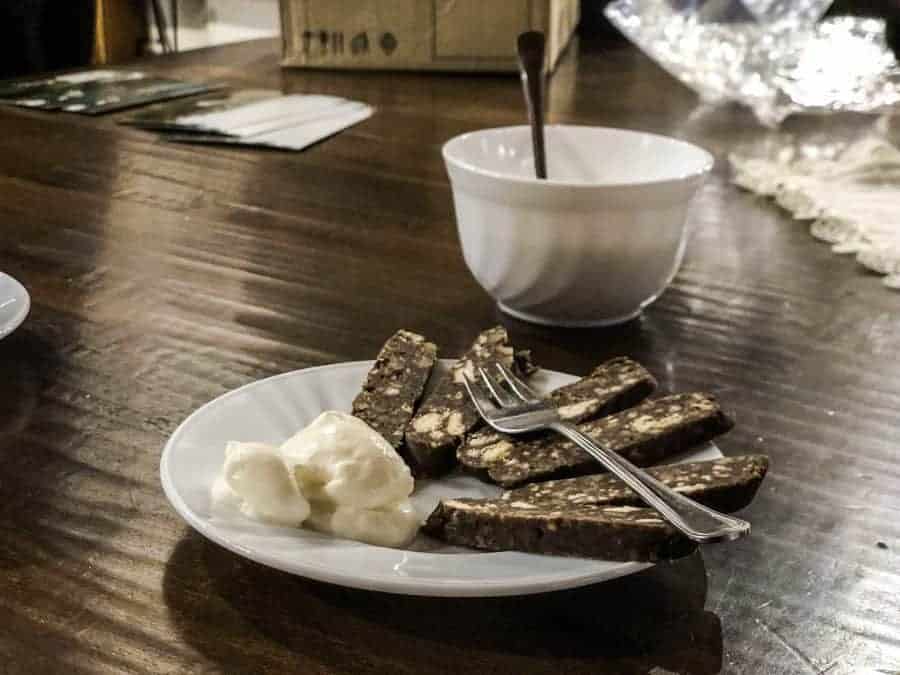 In the morning, the kitchen was up and running at 8:30 AM. We arrived at the restaurant and Svetlana immediately informed us that our Rodopi breakfast was in the works and would be ready soon. Our breakfast, as authentically Rodopi as our other meals had been, was Banitsa – a Bulgarian-style pancake made with eggs and cheese and served with jam and feta cheese. I was initially skeptical when Svetlana told us that we could mix the feta and jam together on the pancake, but after trying it, I am completely sold and trust that it is impossible for Rhodope food not to be delicious. 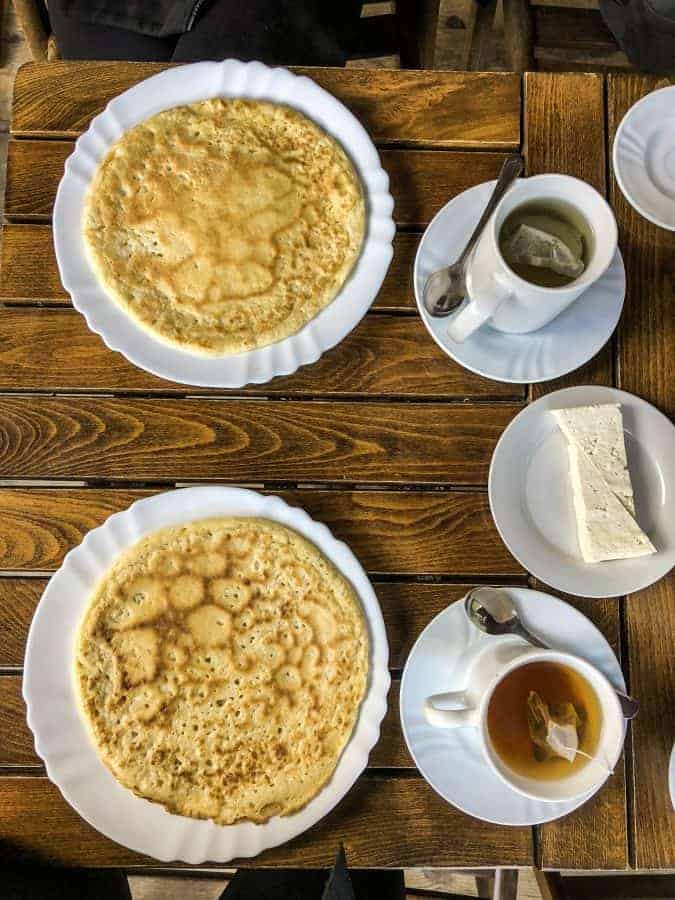 Beautiful Location in the Heart of the Rhodope Mountains

Complex Kosovo Houses has the most magnificent location in the heart of the Rhodope mountains. It is completely surrounded by the Rhodopes, and sitting on the balcony of the restaurant gazing out at the mountains was simultaneously calming and thrilling. For nature lovers and hikers alike, there are tons of trails located near Kosovo Houses. Svetlana informed us that most of the hikes nearby were quite steep, and we had already hiked vigorously that day – so we opted out of additional intense hiking and took a walk around the village instead. 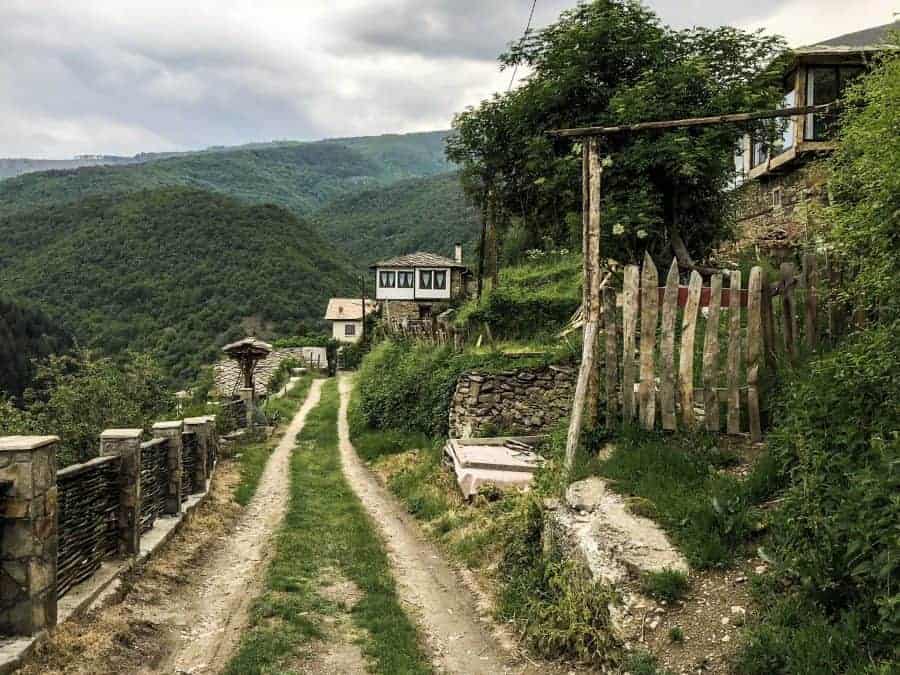 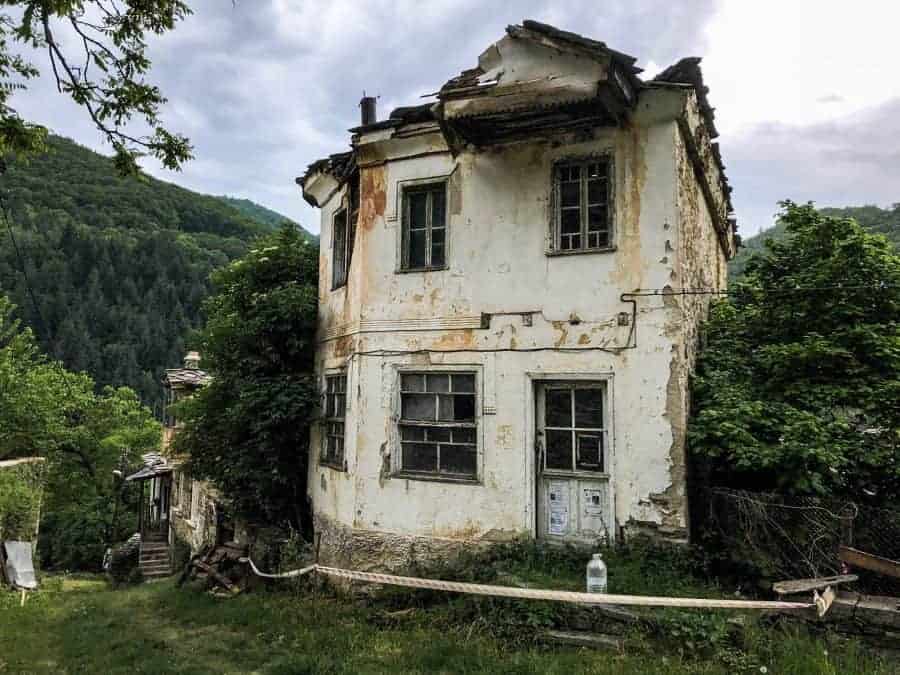 An abandoned house in the village

Diana and I both had a preconceived notion about the village that turned out to be completely false. We knew that Kosovo was small and assumed that there wouldn’t be many shops around. However, we still thought that there would be a central street with some houses and stores. We circled up and down the mountain looking for the village, and were mind-boggled by the fact that we kept missing it when the map said we were there. We found out later that we had, in fact, reached the village, but instead of a street with stores, it was merely a few houses scattered throughout the hills. The hike was serene and refreshing, and we were able to see some stunning views of the mountains and Kosovo Houses along the way. 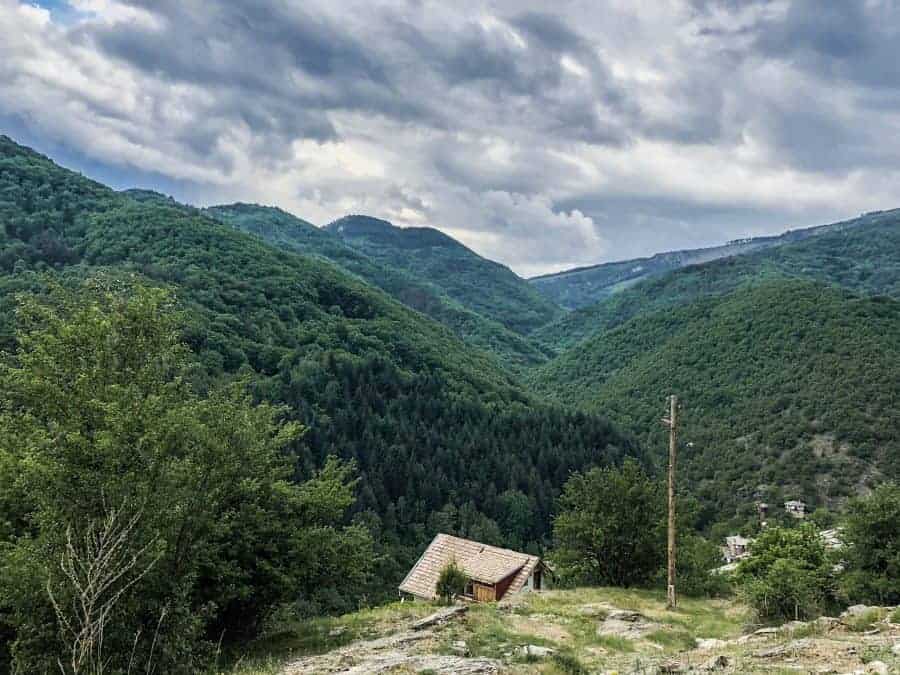 The rooms at Complex Kosovo Houses included everything we could have needed. There were sets of pillows and blankets, as well as extra blankets in case it got cold at night. Additionally, space heaters were included in each room, so being cold is a non-issue at Kosovo Houses. 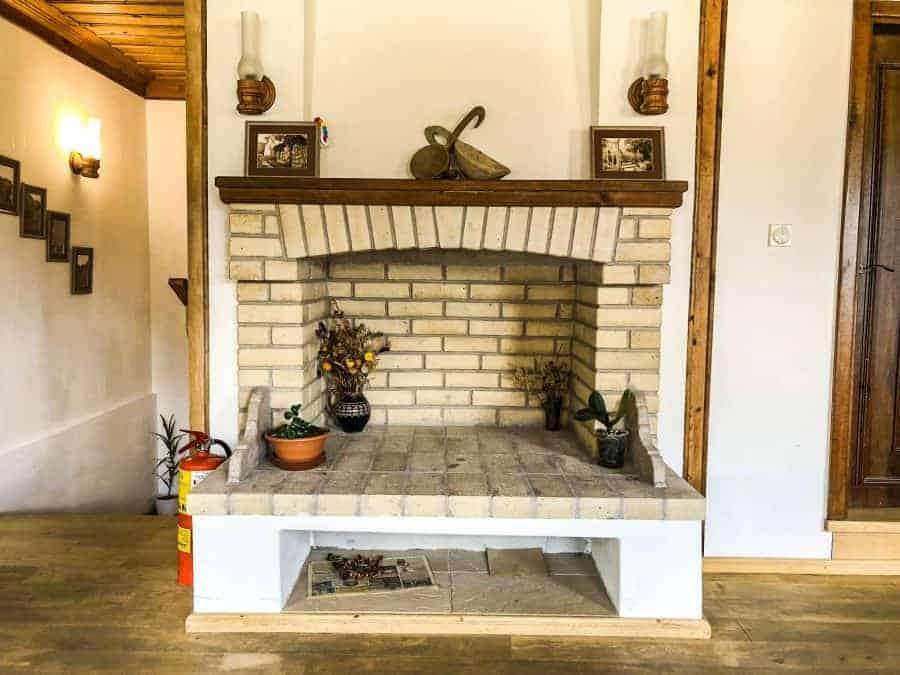 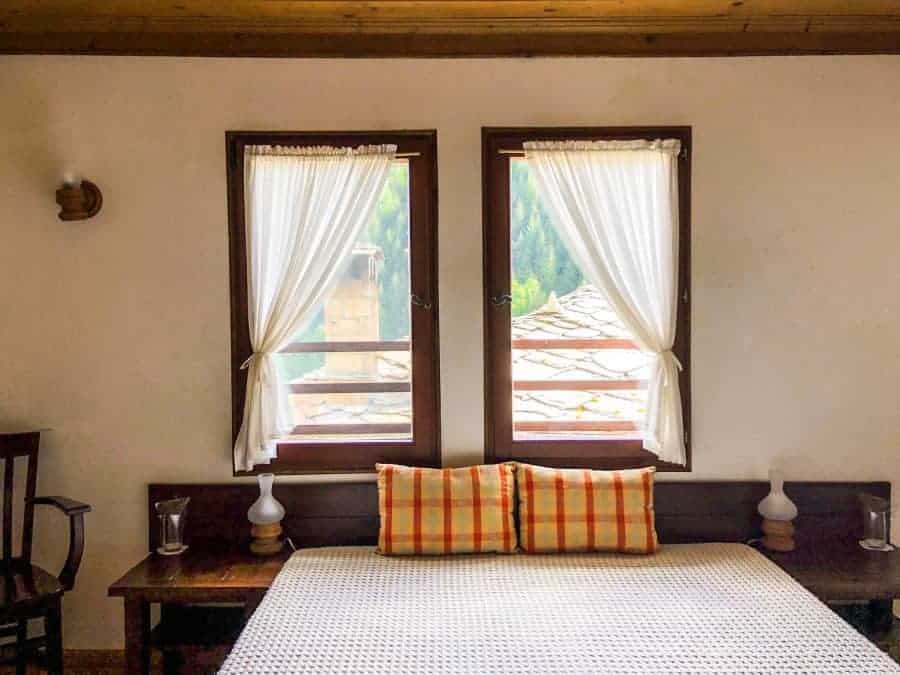 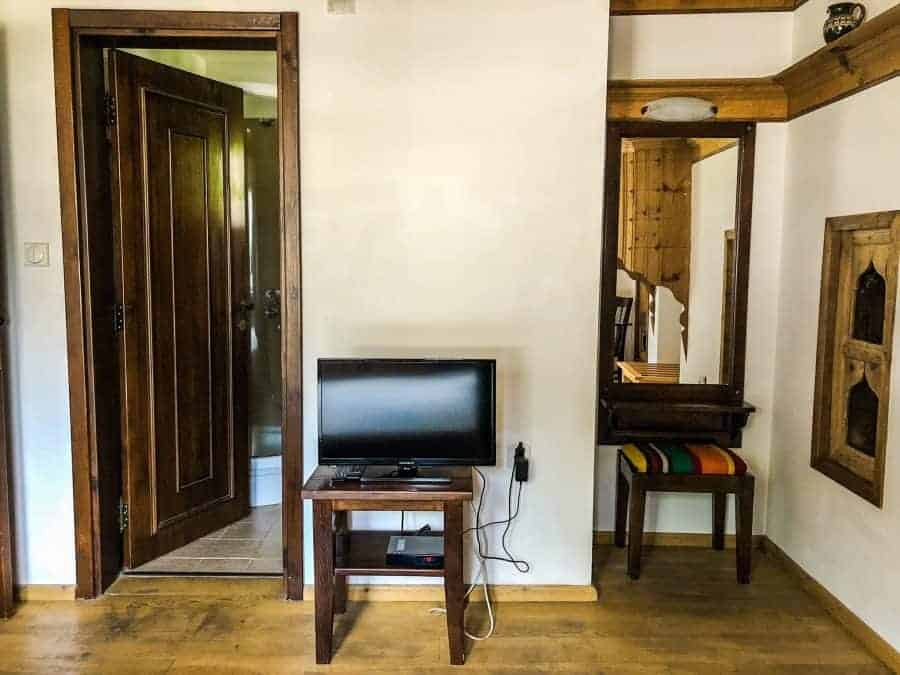 In addition to bedding, there was a television, full-length mirror, luggage table, and chair in our room. The bathrooms were equipped with shampoo, body wash, soap, hand and body towels, and glass cups. 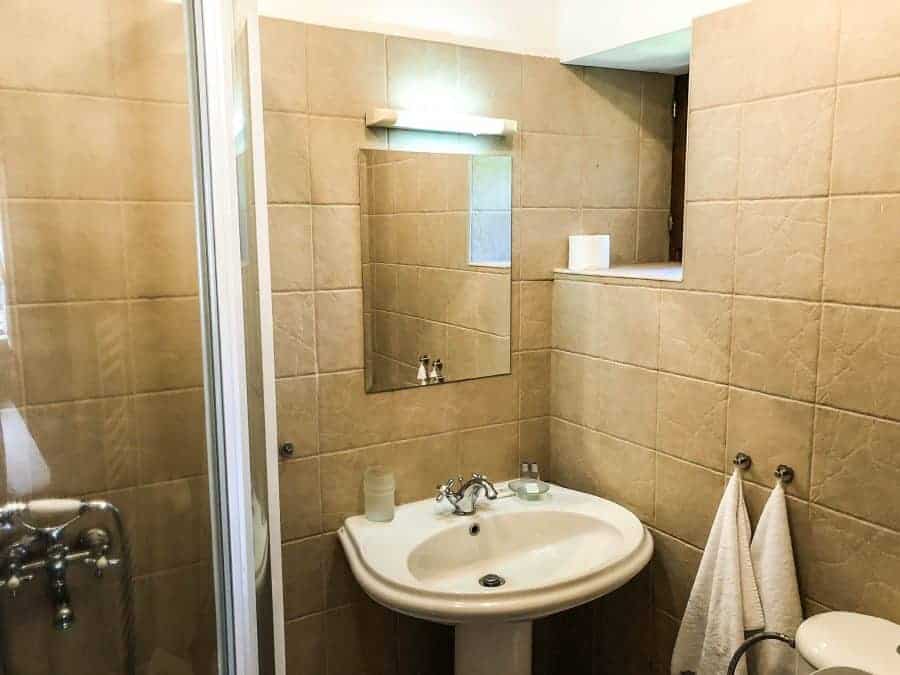 Although there isn’t a desk inside the room, there is a large common area right outside the room with tables and colourfully decorated benches. This room is surrounded by long glass windows and is an excellent place to relax, chat, and bask in the natural light. 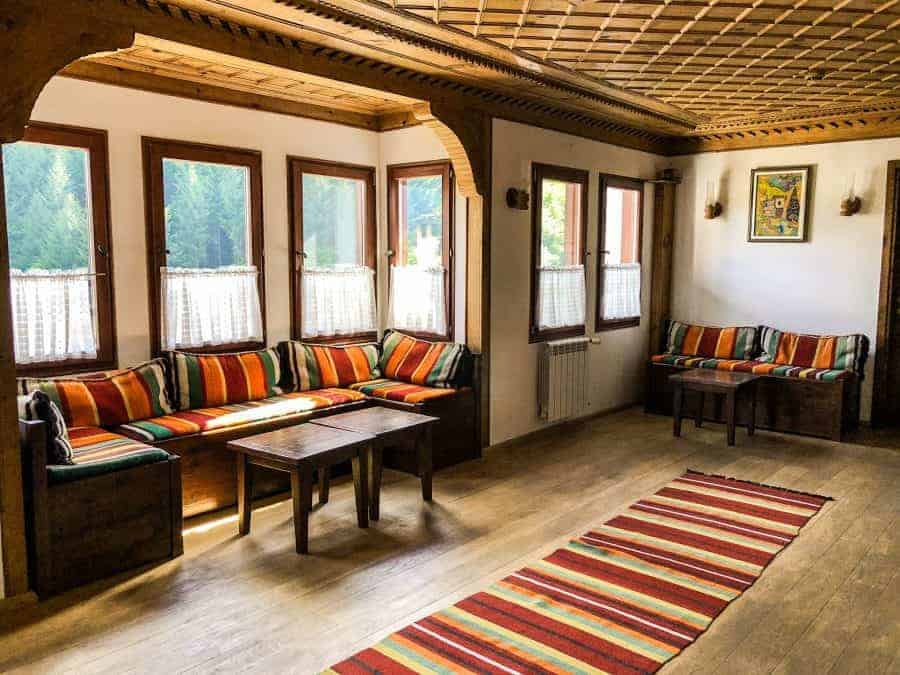 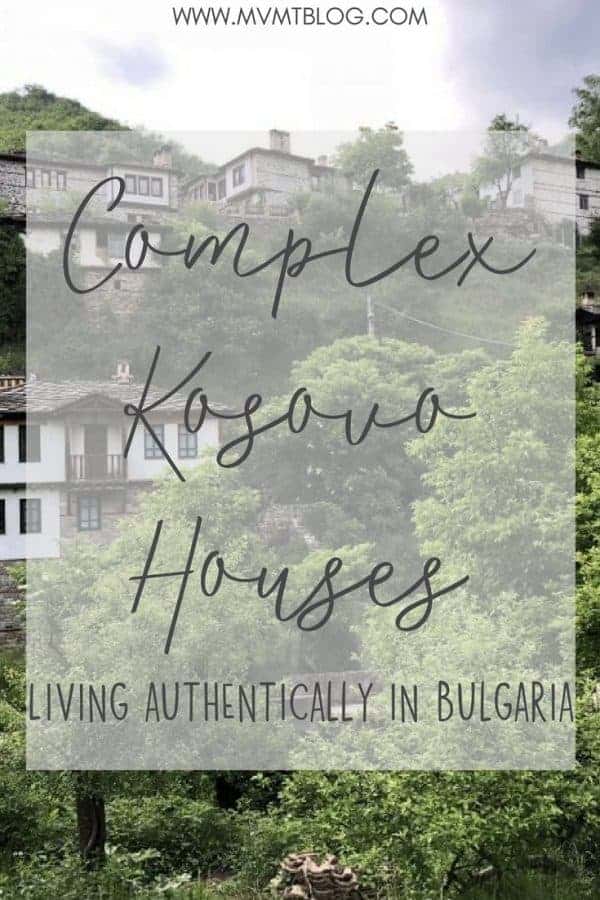 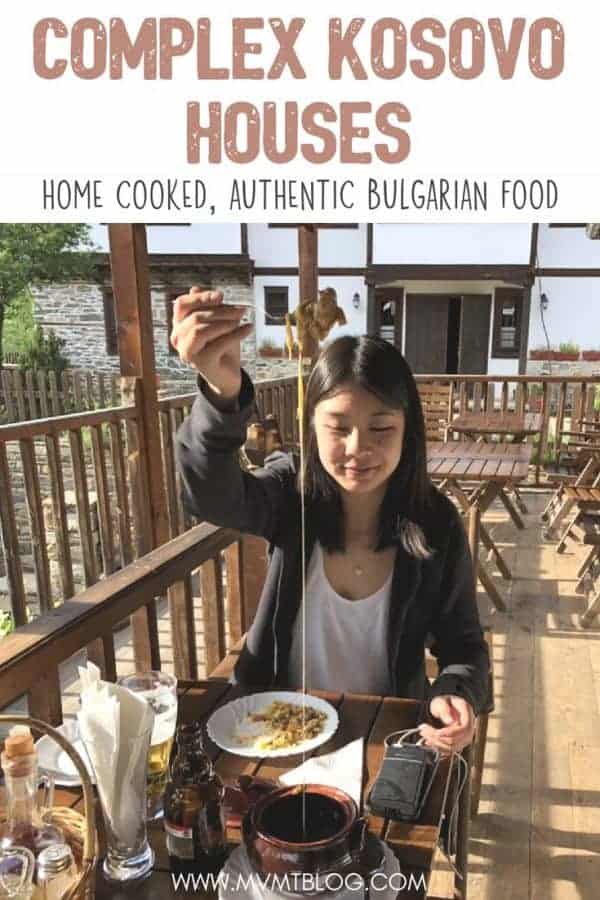 A big thank you to Complex Kosovo Houses for making our stay possible. As always, all opinions are 100% our own.