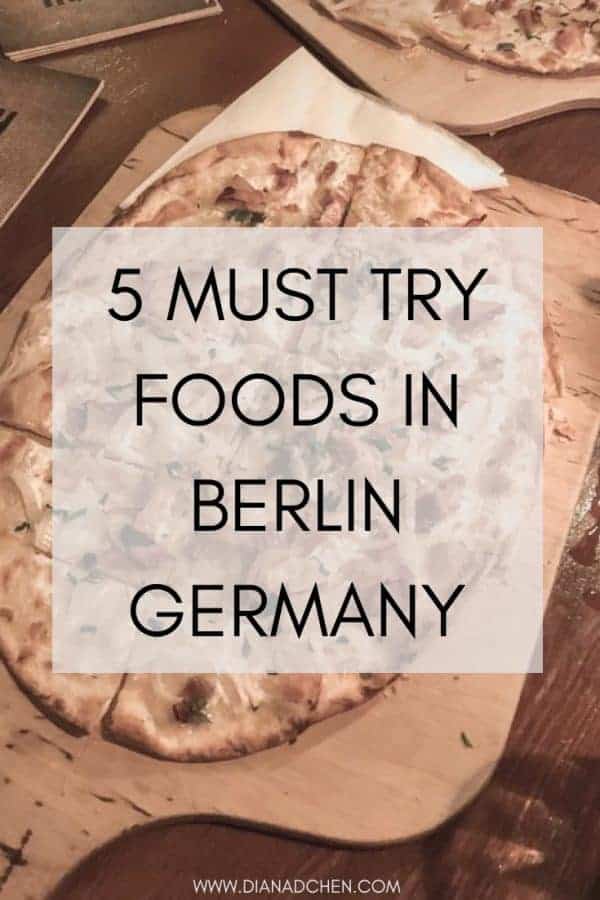 One reason Berlin is one of my favorite cities in the world is because of its diversity, which reflects well in its food. Unlike most cities in Germany that feature traditional German foods, like bratwurst, sauerbraten, and spätzle (all of which are delicious, by the way), Berlin is popular for non-traditionally German dishes that are influenced by its diverse population. On my most recent trip back to Berlin, I had the opportunity to eat my way around the hip and trendy Friedrichshain neighborhood in Berlin with Secret Food Tours. Whether you decide to sign up for a tour with Secret Food Tours like I did (which I recommend) or eat your own way around Berlin, here are my top five must try foods in Berlin. 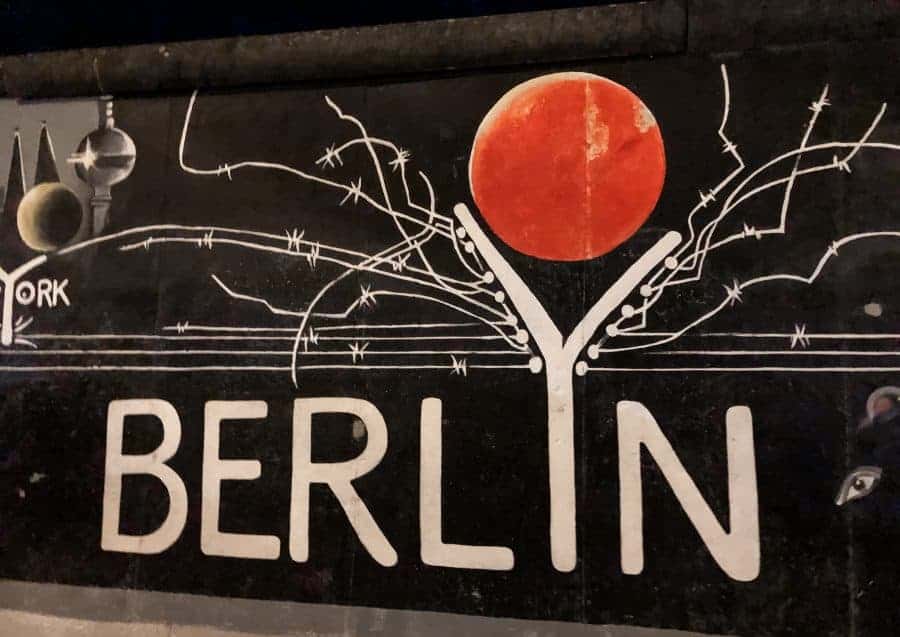 The one food I cannot go without having every time I visit Berlin is döner kebab. If you haven’t had döner before, you’ve surely seen it somewhere around the world, as the large inverted rotisserie cones covered in juicy, seasoned meat (usually beef, lamb, or chicken) are typically easy to spot. I was so sad to have missed this stop on my Friedrichshain food tour due to a cancelled Ryanair flight, not only because döner is one of my favorite foods, but also because the rest of the group raved about the quality and quantity of the chicken döner they tasted on the first stop of the tour. The running joke during the rest of the tour was that my fiancé and I had to eat all the extra food we had at each stop since we got a late start on the tour – even though the food we were given at each subsequent stop was more than enough to get us caught up in no time. 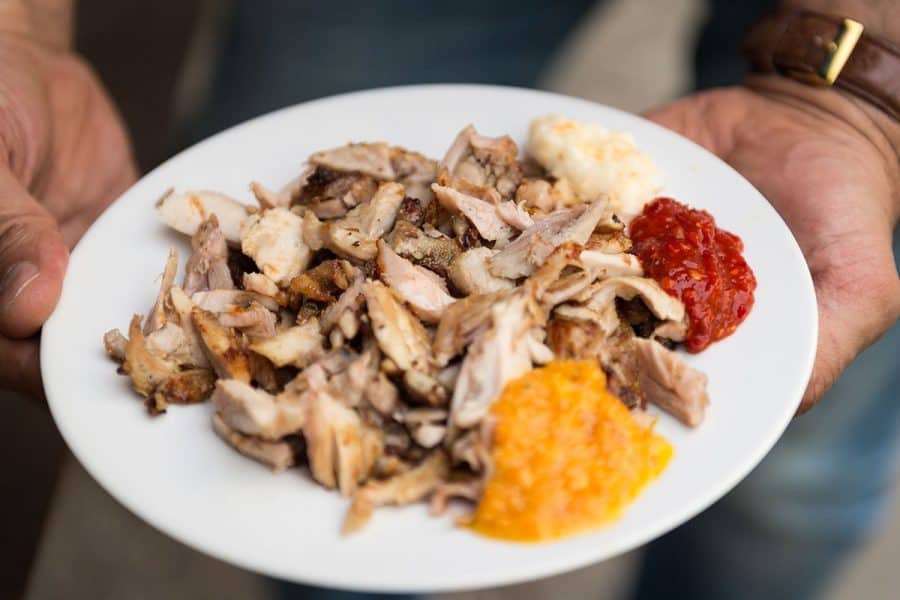 One thing I learned on the tour was that Berlin has the largest Turkish population outside of Istanbul, Turkey. Thus, it is no wonder that Turkish influences can be found in so many of Berlin’s most famous and delicious foods. When a large influx of Turkish workers relocated to the city after World War II, they brought their beloved döner with them, introducing the vertical rotisserie to Berlin. Today, döner kebab is typically served one of two ways: stuffed into a pita like a sandwich, or wrapped inside a durum, a thin flatbread wrap. Personally, I prefer the pita sandwich version, but you should try both and decide for yourself which you like better.

Before you give in to the temptation to call this pizza or flatbread, let me just tell you that it is not. While having similar qualities to both pizza and flatbread, it is its own food, called Flammkuchen in German. You’ll know when you’ve found Flammkuchen, as opposed to pizza or flatbread, when you taste a thin, crispy crust covered in crème fraîche, bacon, and onion. It’s the perfect savory food that satisfies all your carb cravings without leaving you feeling as stuffed and uncomfortable as pizza sometimes can (hello, Chicago deep dish pizza). While modern versions of Flammkuchen may incorporate more creative combinations of toppings, the traditional Flammkuchen is made with only crème fraîche, bacon, and onion. 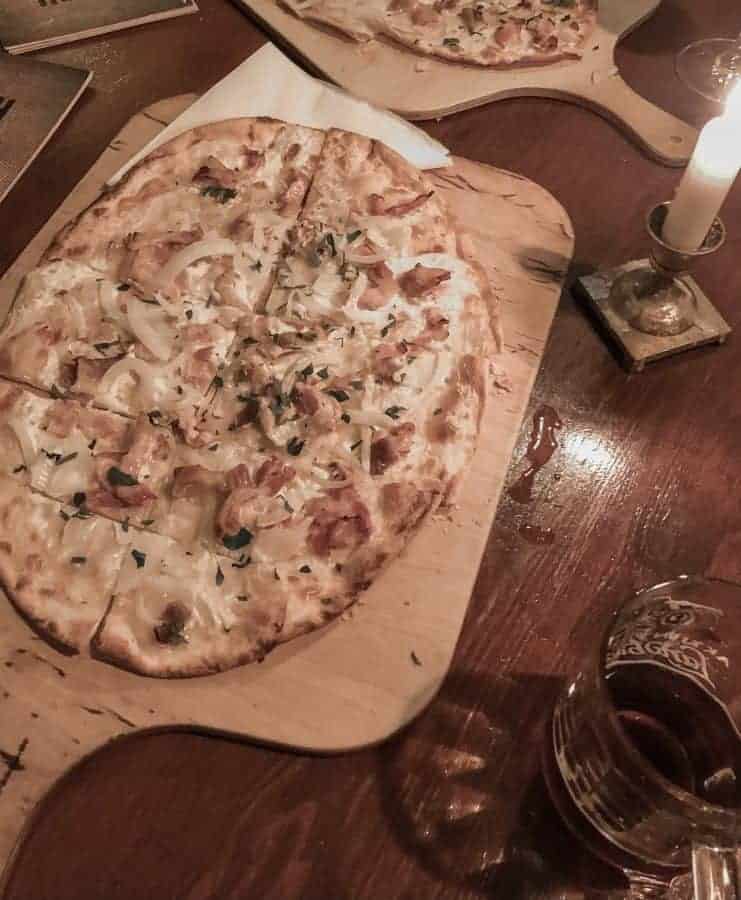 A fun fact about Flammkuchen is that it originated from the Alsace region, which, after years of flip-flopping between German and French rule, now actually belongs to France (the French equivalent of Flammkuchen is flambée). However, the neighboring German state of Saarland now claims ownership of the Flammkuchen invention. Regardless of its origins or ownership, Flammkuchen is a delicious snack or light meal best accompanied by a cold beer or a glass of white wine. Our lovely tour guide, Becs, served us our Flammkuchen with a dark beer, which to my surprise tasted more like a light beer. A few others in our group asked for wine, which they were happily provided with. As we continued eating our way around Friedrichshain with Secret Food Tours, we realized that “ask and it shall be given” seemed to be the wise words to eat and drink by.

It’s a mystery how this happened, but it took me until my third visit to Berlin to try the ever-famous currywurst. When Hope, the other half of the sister duo behind MVMT Blog, lived in Berlin in Summer 2017, she ate currywurst nearly every day and constantly raved about it as her favorite food. I was skeptical, as I am not the biggest curry lover, but the curry used on currywurst (which, by the way, is a secret recipe that varies from restaurant to restaurant) was delicious. To be honest, I had one bite and was sold. The trouble with developing a love for foods like currywurst, which aren’t nearly as popular internationally as döner, for instance, is that now I’ll have to wait until my next journey back to Berlin to satisfy my currywurst craving. 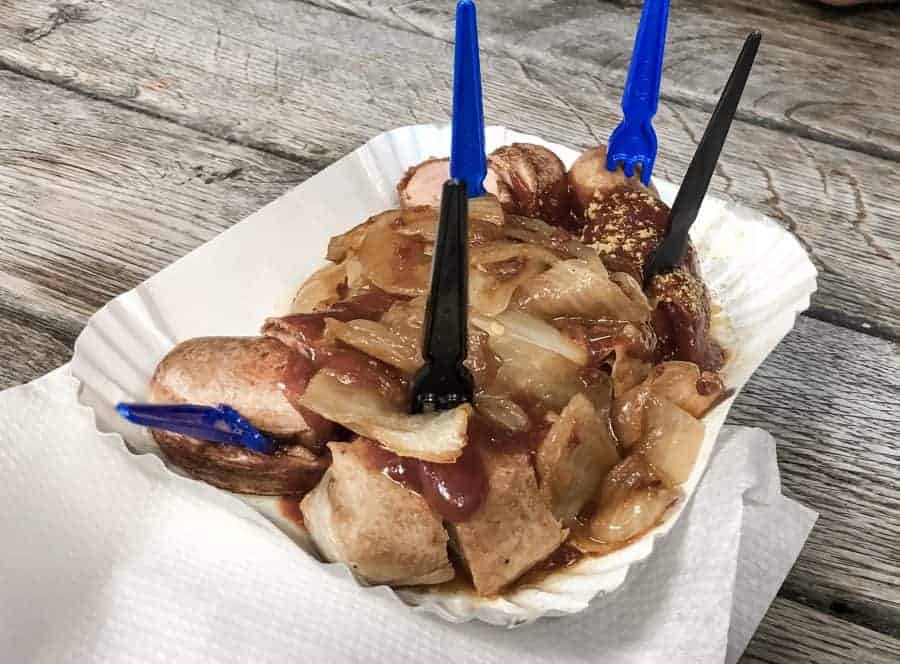 Another delicious native Berlin food I hadn’t tried before my Friedrichshain food tour was Schnitzelbrötchen, or a schnitzel sandwich. It’s the perfect grab-and-go snack or meal that will satisfy all your meat and carb cravings. For the vegetarians out there, schnitzelbrötchen can be made with vegan schnitzel as well, so everyone can indulge in this delicious food. 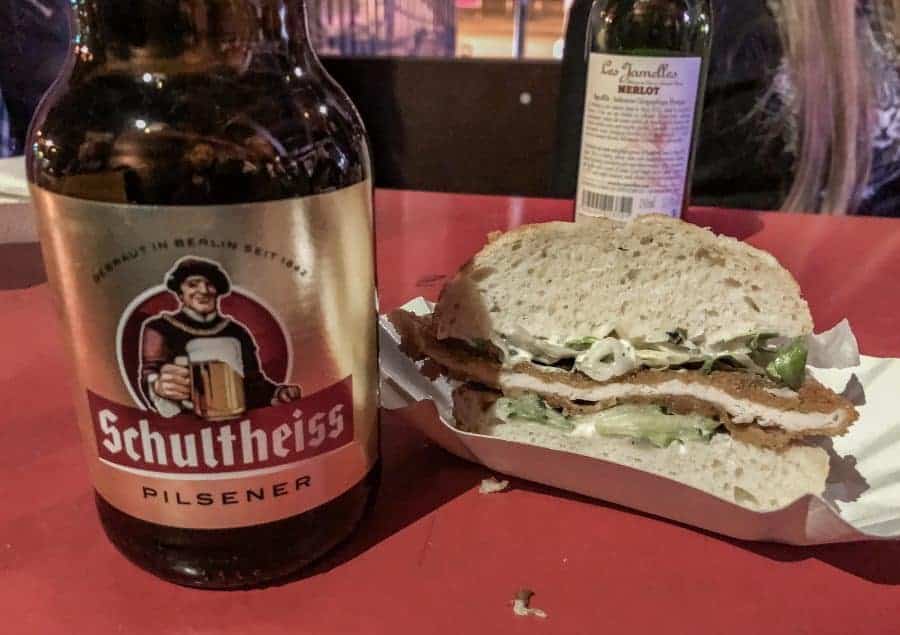 No schnitzel is complete without a refreshing German beer to wash it all down, which our tour guide, Becs, served to us at our last stop on the tour. We finished off the tour with a decadent chocolate cake that Becs had picked up for us from a different shop earlier on the tour, and I finished every last bite. It was the perfect ending to the perfect food tour.

While not necessarily a Berlin food, there are so many Turkish candied nut shops around Berlin that it’s worth mentioning. These candied nuts were roasted to perfection after being seasoned with the most delicious sweet sauces. The shop we went to also sold Turkish desserts and other pastries, and I found it an almost impossible task to walk inside without buying something. As soon as the sweet smell hits your nose and you see the affordable price tags, you’ll want to buy everything. 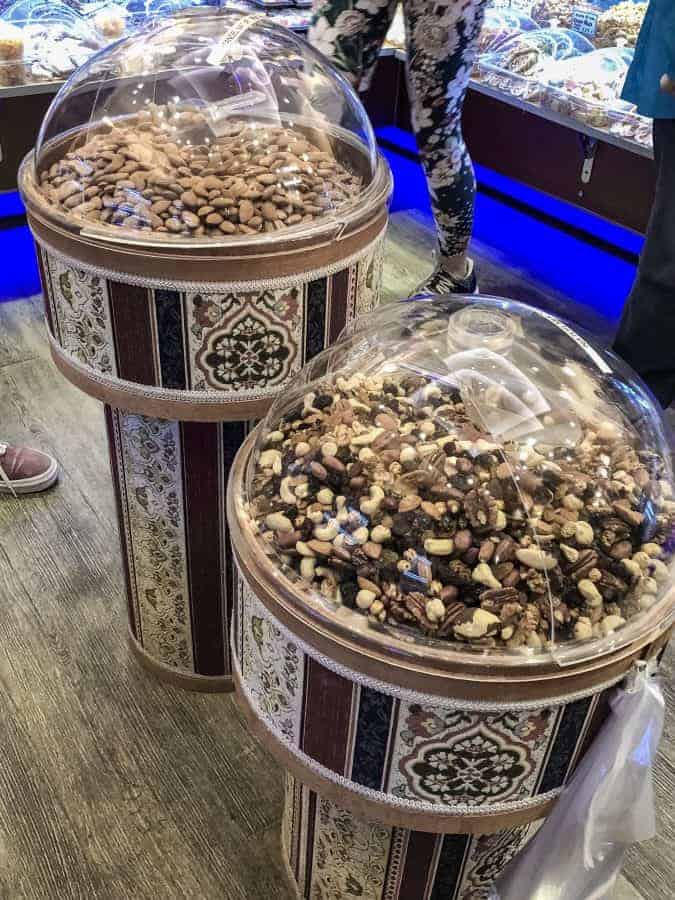 Want to find out exactly where we went in Friedrichshain to experience these delicious foods? Then you’ll just have to sign up for the Friedrichshain food tour with Secret Food Tours! Click here to book your tour today.

If you love trying new foods from around the world as much as we do, then you’ll love these food tours: 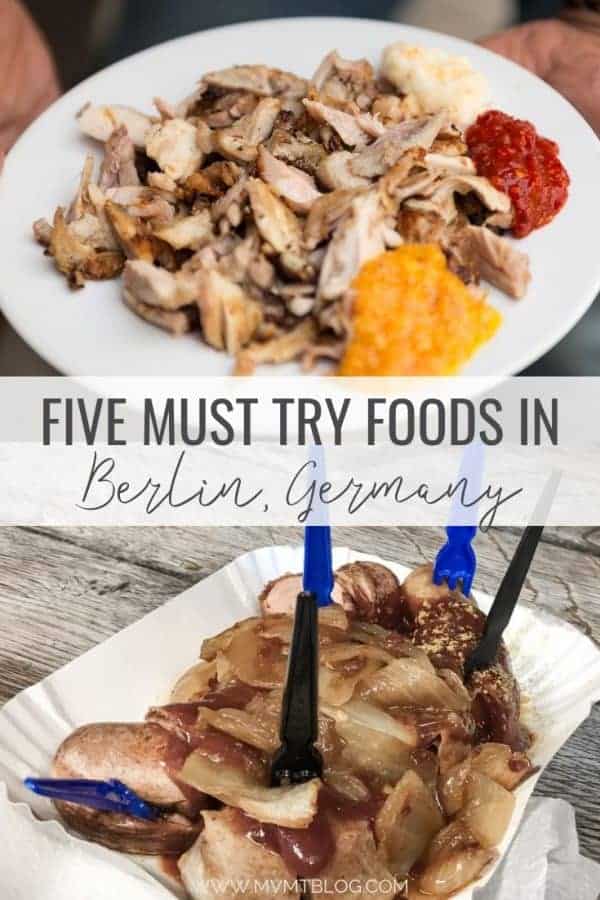 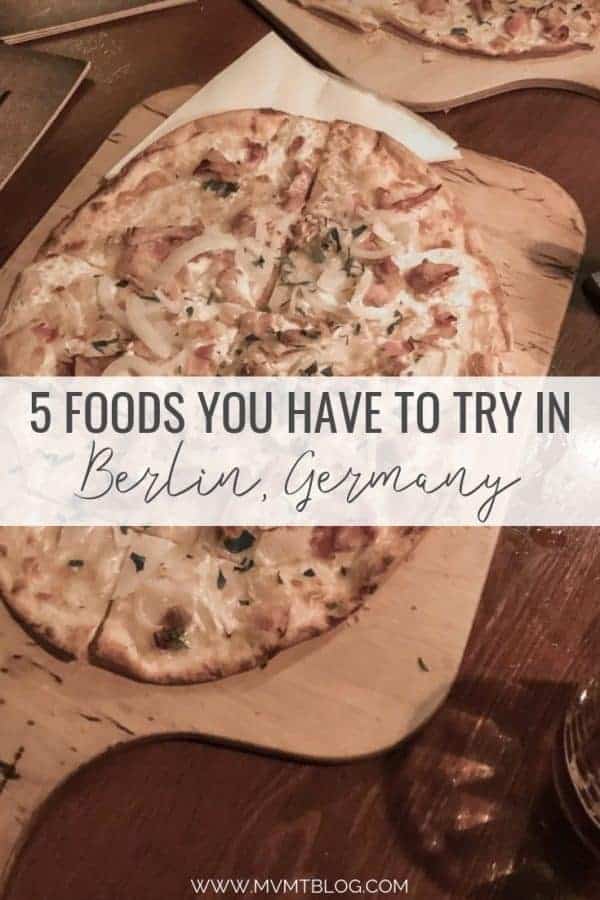 A big thank you to Secret Food Tours for hosting our visit. As always, all opinions are 100% our own.