Comprehensive Guide for Things to Do In Lucerne

This summer, I had the chance to go on yet another crazy, fast-paced trip. I managed to cover 8 countries in 15 days, and that’s counting the ~30 hours I spent travelling to and from Europe. The way I planned the majority of my trip was by using the fare planner on Ryanair, where I found a cheap flight from London (where I was before Lucerne) to Basel. I had to be in Munich a few days later, so I was looking for cities between Basel and Munich when I stumbled upon Lucerne. From Basel, I found a cheap train ticket to Lucerne, and thus began my Swiss journey. Without further ado, here’s my comprehensive guide for things to do in Lucerne, Switzerland. 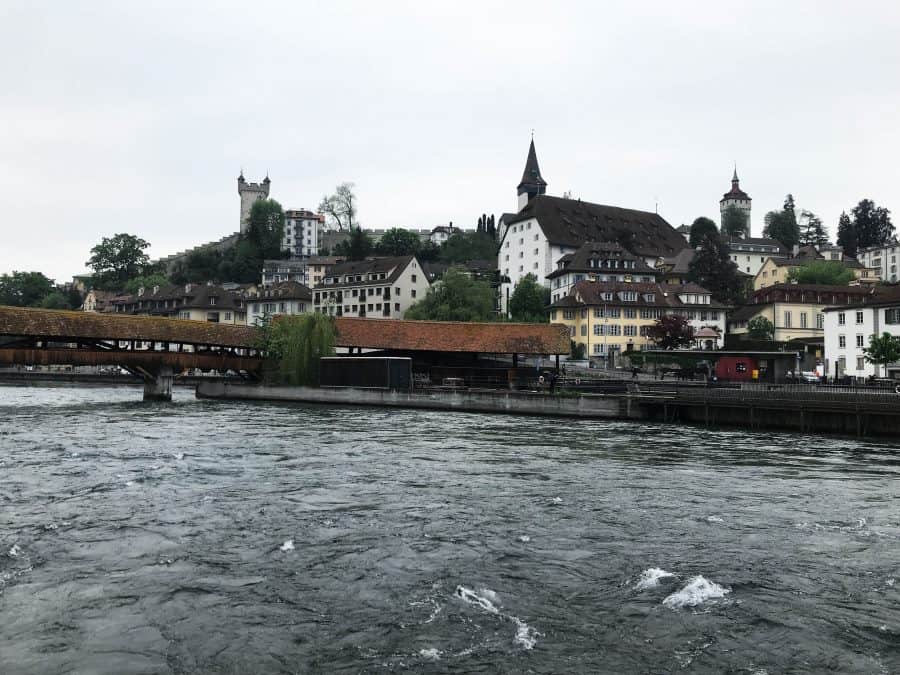 I stayed in the Bellpark Hostel in Kriens, which was the most affordable option during the time when I went. It was fairly empty when I was there, mostly because I went in early May before tourism season kicked off. The hostel itself was great – complimentary breakfast in the morning (delicious Asian fried rice), clean rooms, friendly and helpful staff, snacks for purchase, and cooking pots/pans/utensils available for everyone to use. The hostel is also located right across the street from the bus that goes to Lucerne city centre, and the hostel gives customers a visitors pass that includes free and unlimited access to the bus, so getting into the city wasn’t a problem.

Mt. Pilatus was the most convenient mountain to explore, as opposed to Mt. Rigi or Jungfrau, since the base of Mt. Pilatus is in Kriens. I did extensive research on all three mountains anyway and am positive that you can’t go wrong with any of them, as each mountain boasts the most stunning views. Unfortunately, the pricing for all three mountains is relatively steep for travelers on a budget. However, for students reading this post, you should know that Mt. Rigi has student pricing, whereas the other two do not. Mt. Pilatus costs 72 Francs (~63 euros) roundtrip to ride the gondola up to the top and back to the base. 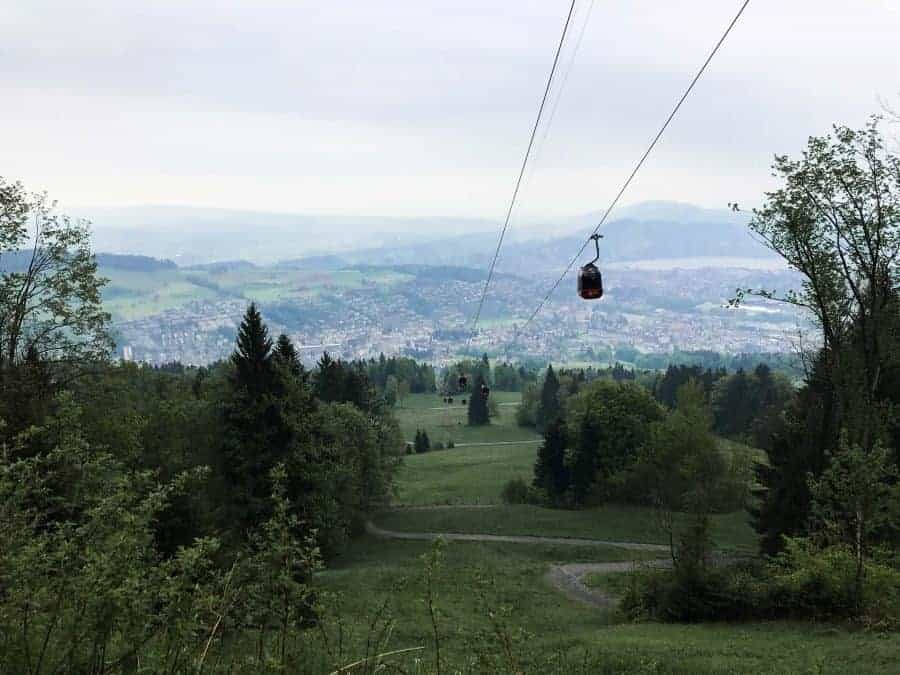 Gondola up to Pilatus Kulm

There are three sections where you can choose to hop on the gondola – Kulm, the base, Krienseregg, the first stop, and Frakmuntegg, the second stop. The increase in elevation from Kulm to Krienseregg is about 500 meters, and the increase in elevation from Krienseregg to Frakmuntegg is about another 400 meters. From Frakmuntegg, you have the option of hopping on the gondola or hiking the remaining 700 meters up to Pilatus Kulm, the peak. I wouldn’t recommend the final leg to anyone other than expert hikers, as I’ve heard the conditions are very steep and rough. Each leg saves you 10 Francs one way, so hiking to Krienseregg and taking the gondola from there would cost 52 Francs roundtrip. One final option is to take the gondola up, the cogwheel down (steepest cogwheel rail in the world), and the boat to Lucerne, but that’s a much more costly option.

I travelled to Lucerne with a friend, and we decided to climb part of Mt. Pilatus for two reasons: 1) we are both broke college students, and 2) who doesn’t love a good hike? So with that, bright and early the next day, we embarked on our partial mountain climb up Pilatus. 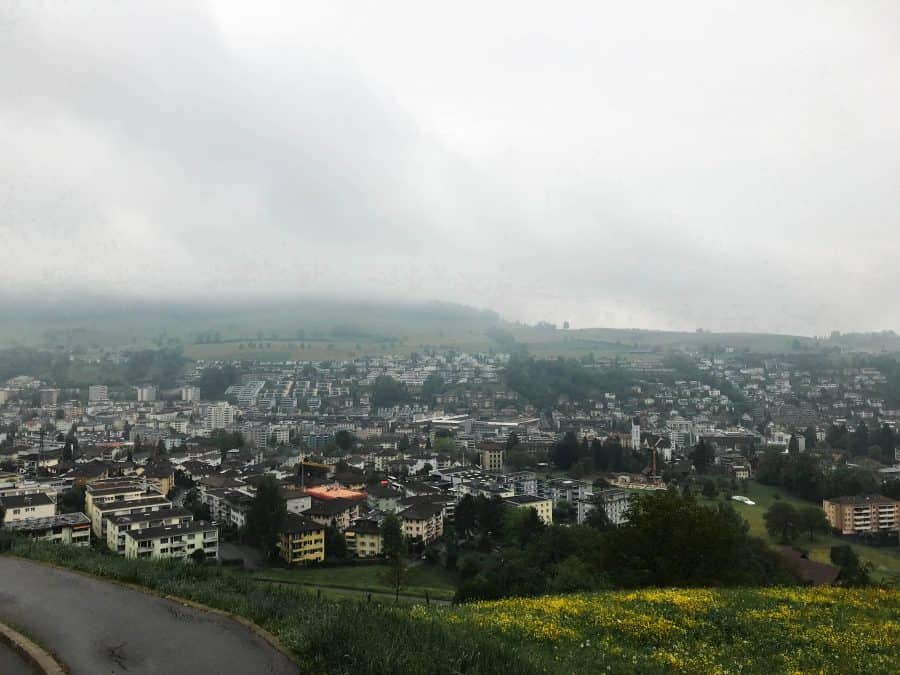 View from the hike

The beginning of the hike consisted of hiking up a hill in a residential neighbourhood, which overall was fairly flat. As we got higher, the houses became more and more sparse, and the sidewalk merged into a winding, one-way road. The hike was incredibly scenic – the entire city of Kriens became clear below us and mountains stood parallel to us in the distance. For this leg of the hike, there are a few different paths you can choose to take. Some paths are shorter and steeper, and some are longer and flatter. We started off on a flat path but then took a detour through the woods, which was significantly steeper than the first part. In total, this leg was about 3 km. During our hike, we noticed that a fog had collected pretty heavily around us. The higher we got, the thicker the fog became. 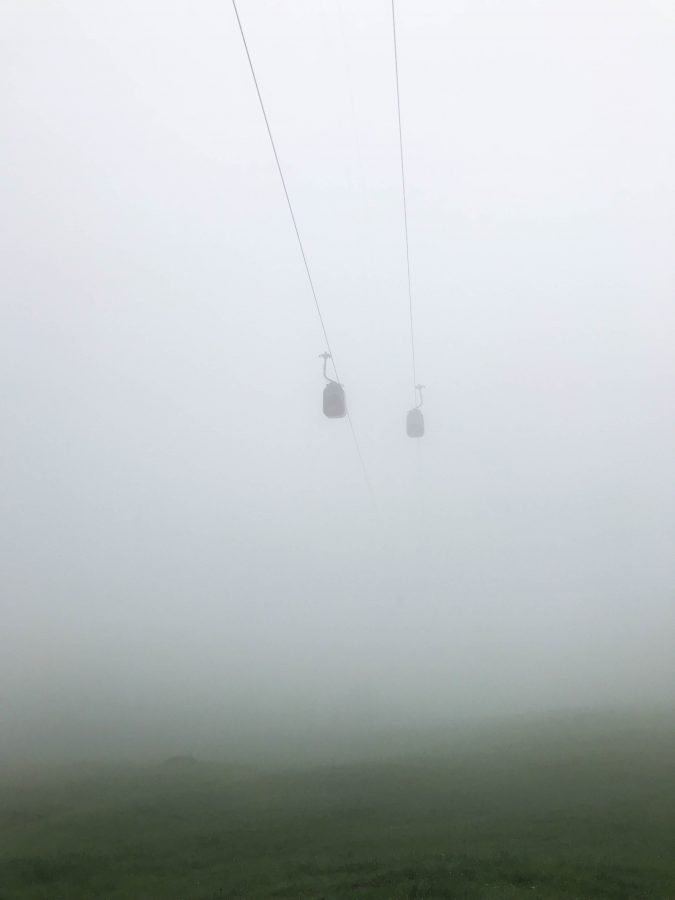 When we reached Kriesenregg, we hopped on the gondola, but we quickly realized that was a bad idea. It only took a minute in the gondola before the fog had become so thick that we could barely see trees below us anymore, and another few minutes before our view was completely obstructed by fog. When we finally reached the top, we found that we couldn’t stand more then a few inches apart if we wanted to be able to see each other on the outside deck. We waited a few hours in hopes that the fog would clear up, but were later told by the staff in the Kulm Cafe that even when the fog does settle, it rarely clears up for the rest of the day. 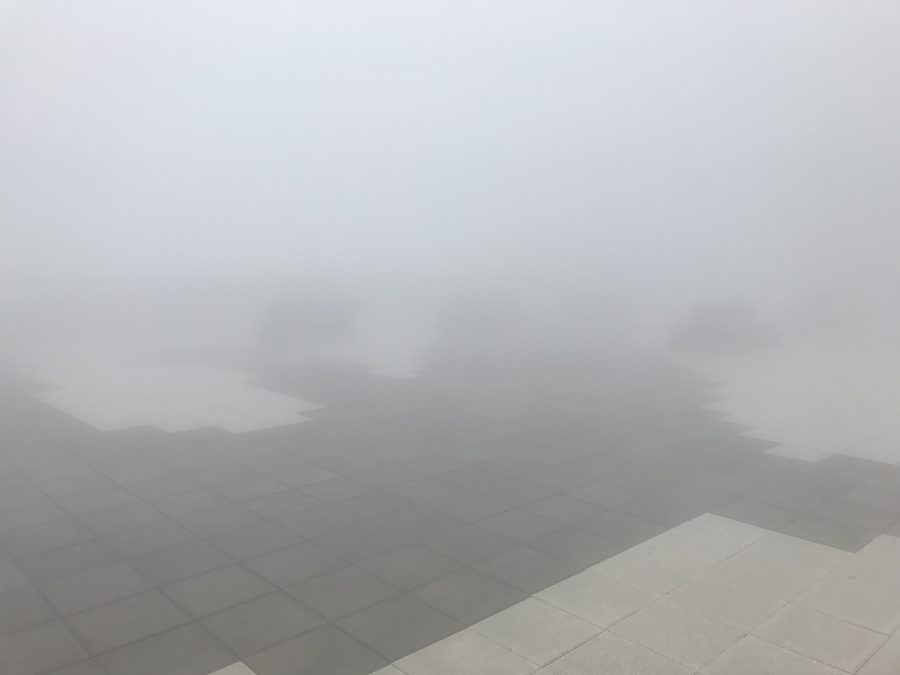 Needless to say, we didn’t get to see much of Pilatus

After an unexpected but still exciting Pilatus experience, we descended the mountain and returned to Kriens. We took a bus to Lucerne and for the rest of the day, we explored the city. I would highly recommend going to the tourist centre near the Lucerne Haubtbahnhof (Lucerne train station) and getting a map. It contains a fairly comprehensive guide for things to do in Lucerne in the form of a self-guided walking tour. We did this and found that it covered all of the main attractions of the old town, and is the most flexible option for those on a tight schedule. 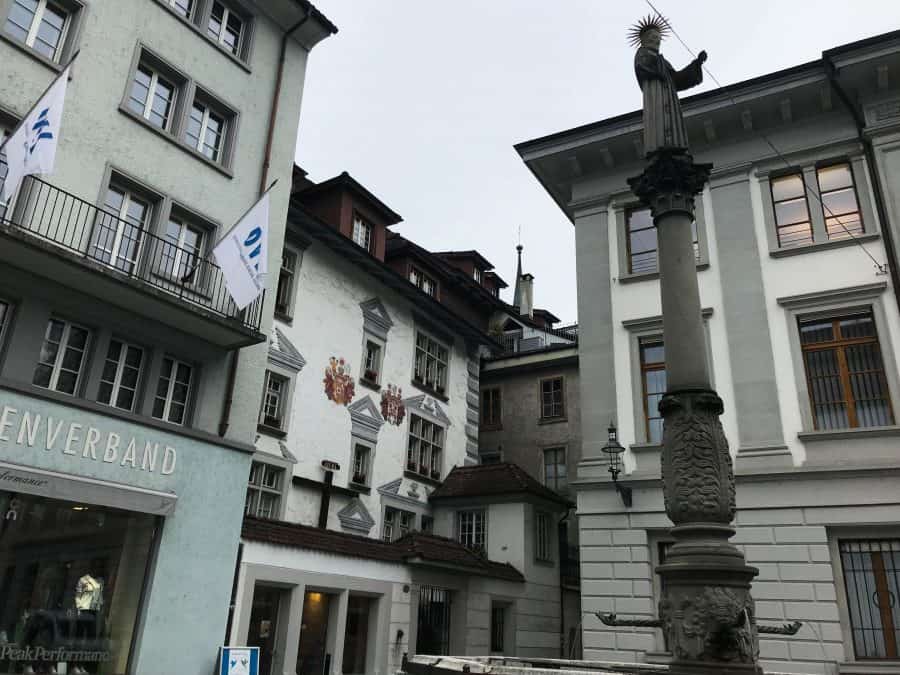 In the old town

Arguably the most stunning attractions in Lucerne are the beautiful bridges that connect the city. There’s Kapellbrucke, or Chapel Bridge, which was built in 1333 and restored in 1994 after a damaging fire the year prior. It has paintings that depict various events from the history of Lucerne City, painted on wooden panels connected to the roof of the bridge (yes, roofs!). Another historical Lucerne bridge is Spreuerbrucke, a wooden footbridge built in the same structure as Kapellbrucke, with paintings that depict Danse Macabre and hold a quite grim common theme of death. 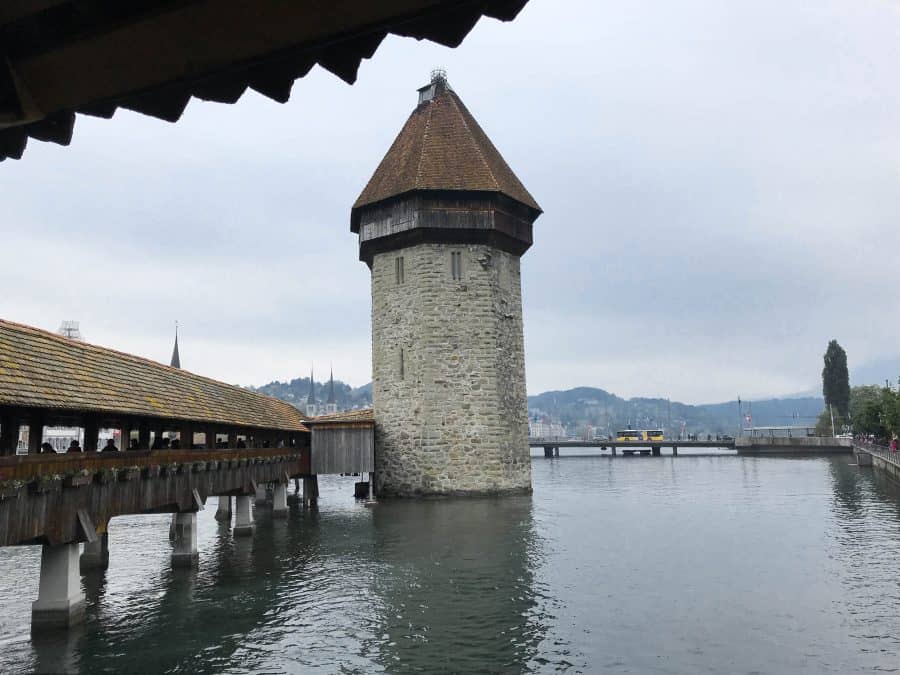 After going back and forth across the bridges to admire the paintings, we began to explore the many churches and chapels of Lucerne – after all, it wouldn’t be Europe without them! Some churches that are definitely worth a visit are Jesuitenkirche, Hofkirche St. Leodegar, and Franziskanerkirche, which are all built in Romanesque, Baroque, or Gothic architectural styles. Next, we took a walk next to the Museggmauer (city wall) which has nine towers – three being open for climbing. We didn’t climb the wall because we were pretty exhausted from our hike, but I’d highly recommend it as I’ve heard it’s one of the best things to do in Lucerne. We also saw the lion monument, which is a memorial to soldiers who died protecting the royal family of France during Versailles, and the Altes Luzerner Rathaus (town hall). Other Lucerne attractions to see that we didn’t have time for are the Glacier Garden, the Swiss Museum of Transport, and Museum Ballpark. 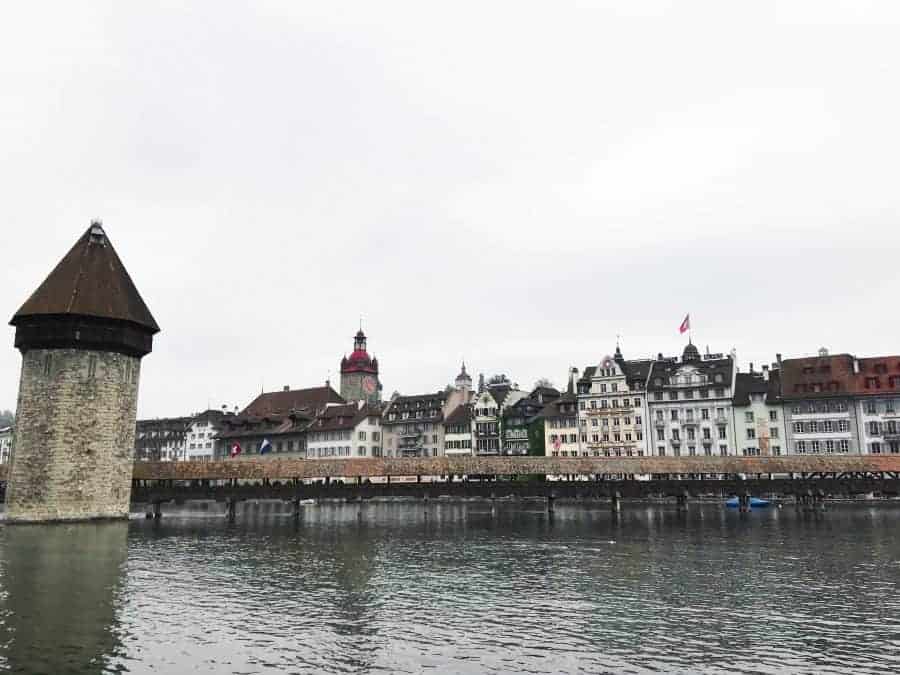 In total, we were in Kriens for 3 days and 2 nights. However, we arrived late on the first night from Basel and hopped on a train from Lucerne to Zurich early on the third day, so we only had one full day for both Pilatus and Lucerne. While I would absolutely go back to Lucerne again one day, we managed to cross off most of the activities on this comprehensive guide for things to do in Lucerne in one day. If you aren’t able to spend an extended amount of time in Lucerne, it’s an easy day trip from Zurich and I’d highly recommend visiting. 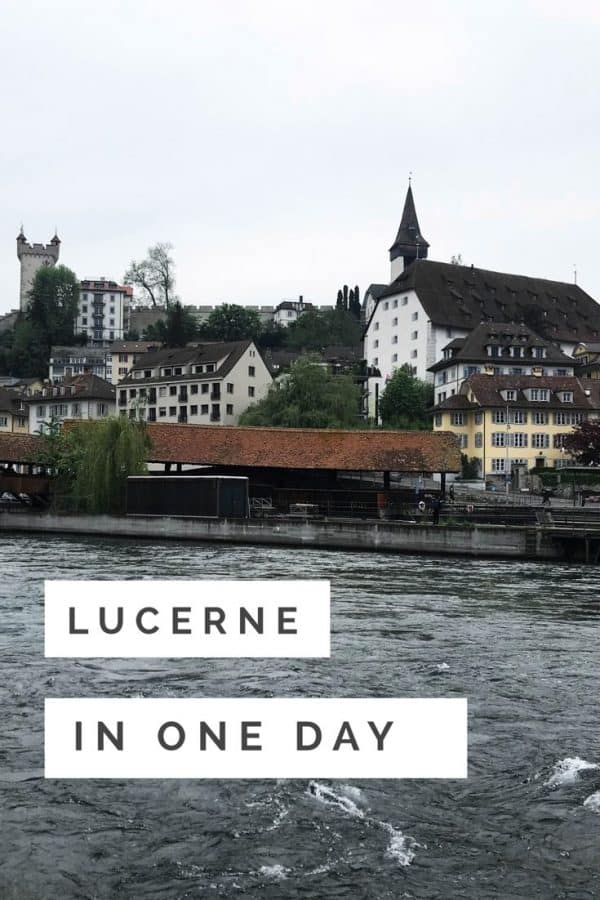 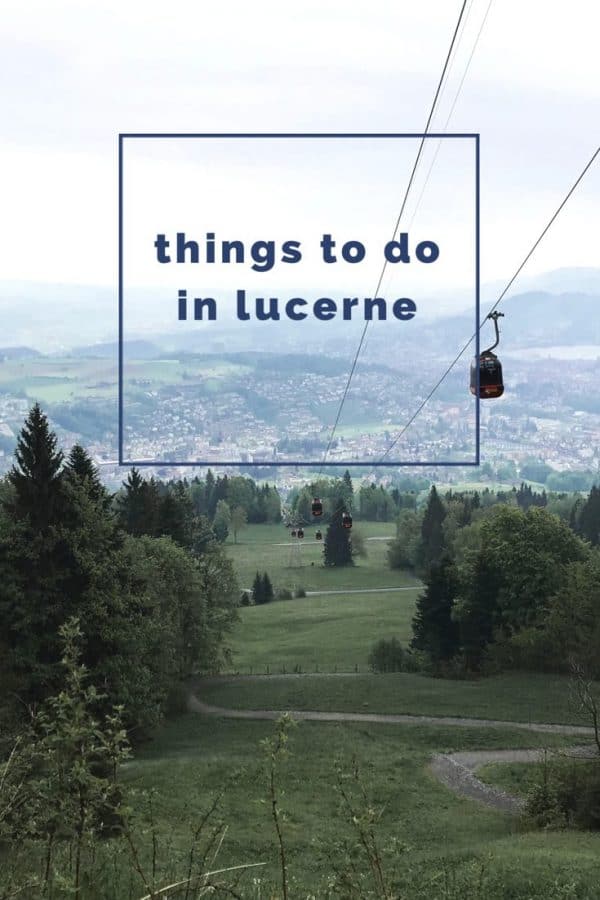 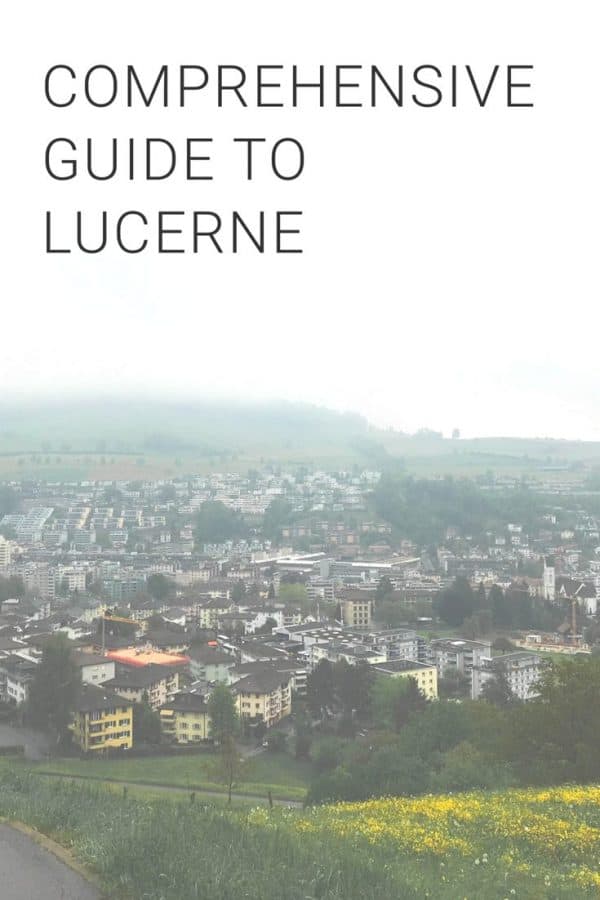