Eat Like an Icelander: Food Tour with Wake Up Reykjavik 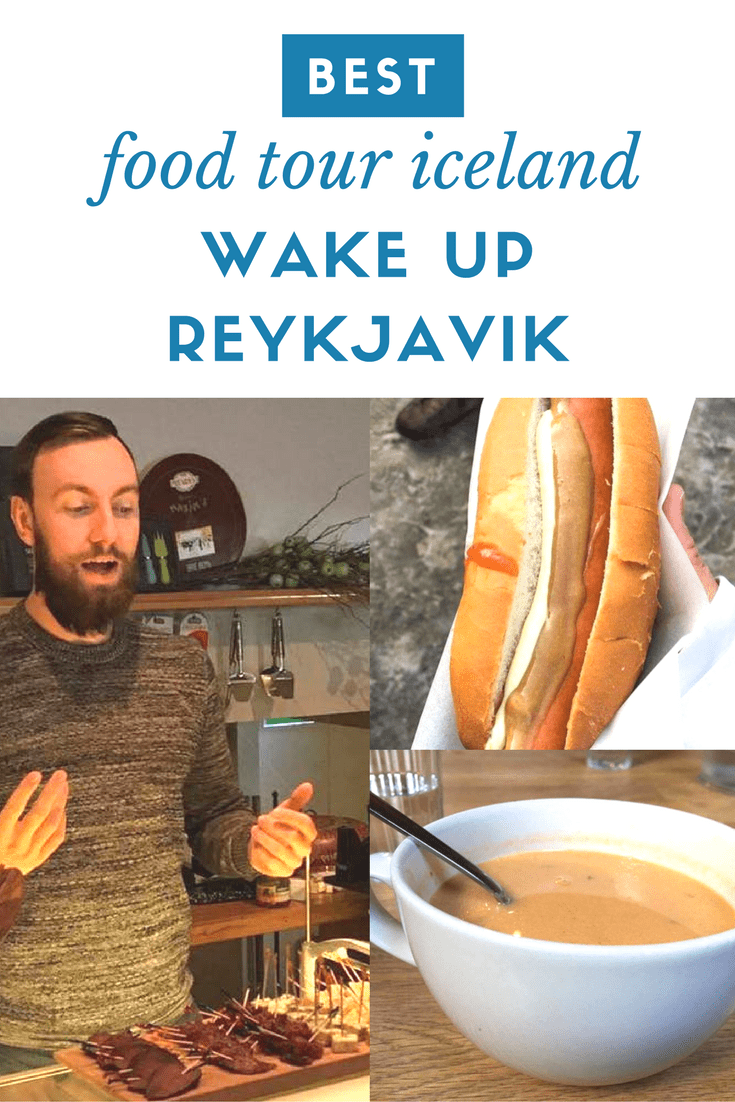 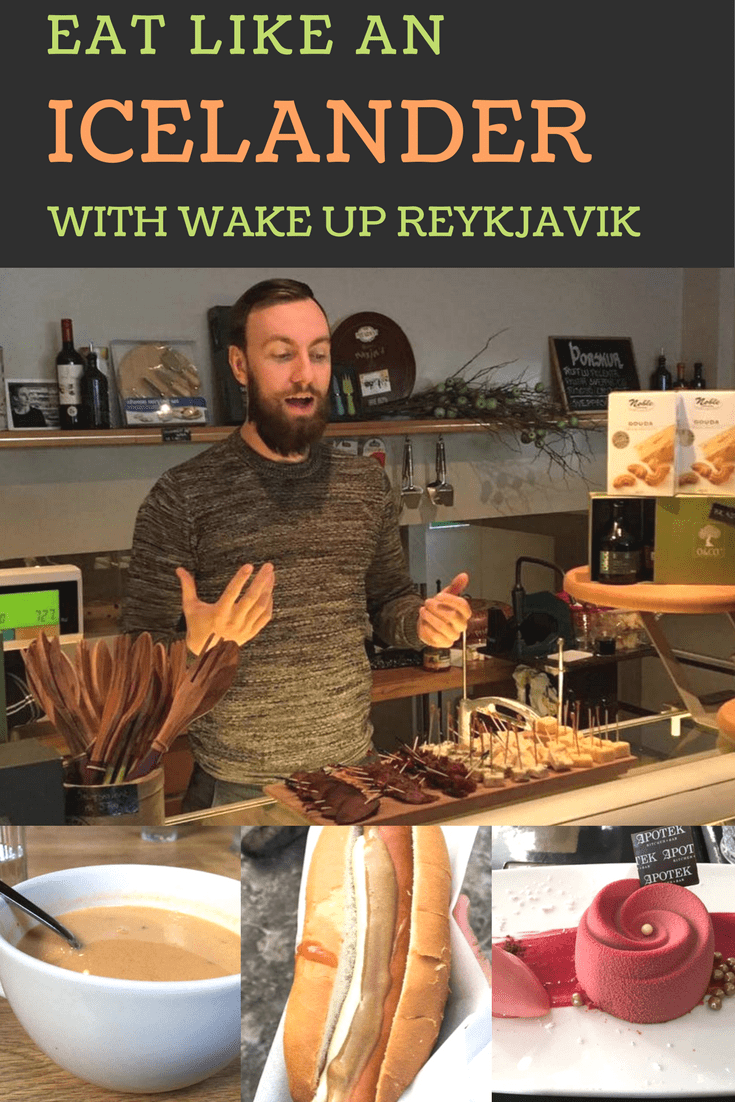 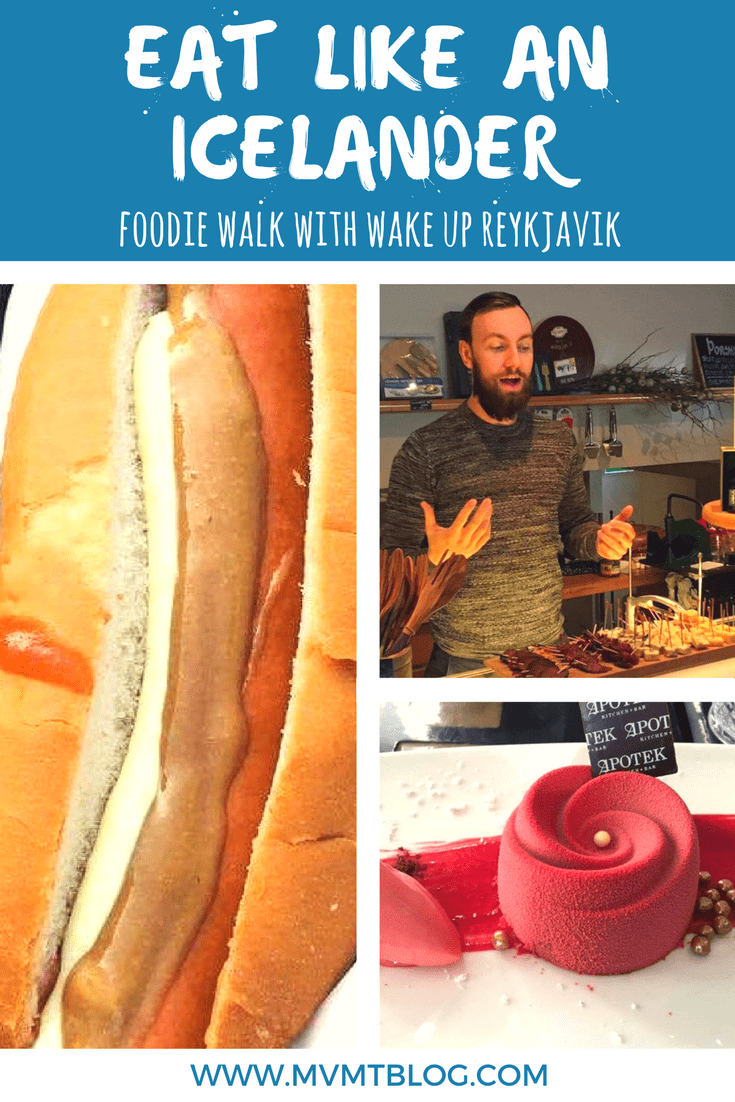 When I was in Iceland earlier this month, I had the privilege of taking my first ever food tour with Wake Up Reykjavik, a local food and beer tour company started by two friends, Daniel and Egill. While I knew we would be making six stops on the tour, I had no idea what to expect beyond that. After taking the tour with Daniel, I think I may be hooked on food tours and will want to eat my way through every city I visit. Not only did we have the opportunity to try some of the most delicious dishes in Iceland and visit local establishments, but we also got a tour of Reykjavik and learned about its history.

Our tour began at Harpa, a large concert hall located a mere 10 minute walk from our hotel. We were provided with detailed meeting instructions via email beforehand and were told to look for Daniel, a man with a dark beard and blue eyes, wearing a bright orange coat and a backpack. With such a specific description, we had no trouble finding him. Before we left, Daniel explained that we would be trying some of his favorite Icelandic dishes on the tour and staying away from dishes such as fermented shark, which is undoubtedly an Icelandic delicacy but also has a strong taste that few enjoy. I was grateful for this as I had tried fermented shark on my first visit to Reykjavik in November 2015 and discovered that it is truly one of the most foul-tasting foods.

Our first stop on the tour was Islenski Barinn, where we had a hearty bowl of lamb soup and a glass of cold Icelandic beer. The lamb was cooked to tender perfection and bursting with flavor. The lamb taste was mild enough that even those who don’t typically enjoy the taste of lamb could enjoy this dish. On a cold day in Reykjavik, I could hardly think of anything more appetizing than a bowl of lamb stew. 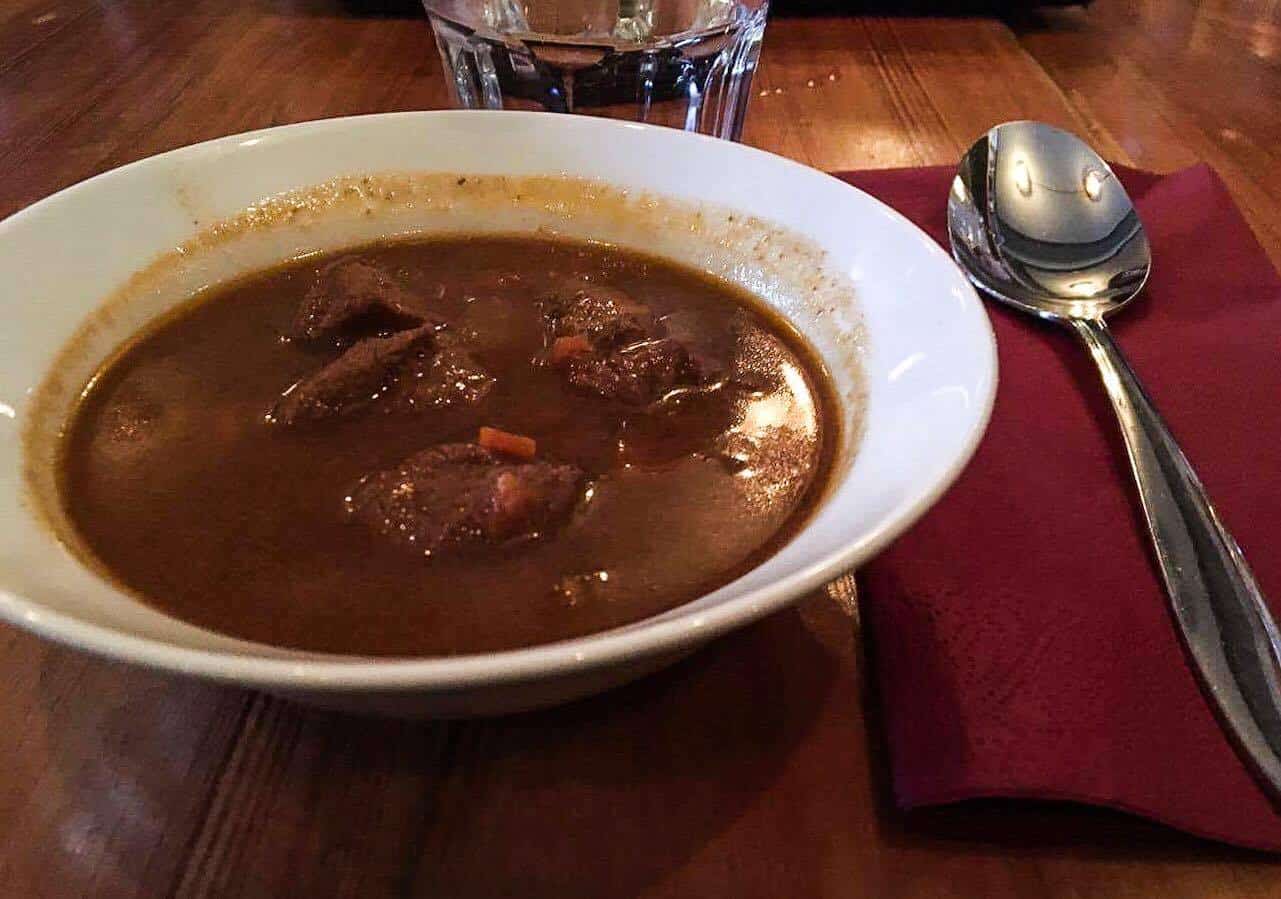 To keep us hydrated, Daniel ordered us a round of Einstok White Ale, a light Icelandic beer with a crisp and refreshing taste that could only be created from the clear waters of Iceland. The beer provided an excellent contrast to the hearty lamb soup. I felt extremely satisfied after our first stop and started to become a bit concerned about how I would fit in five more stops of delicious and hearty food.

Luckily our second tasting consisted of some lighter bites that gave us a chance to digest our meal from Islenski Barinn. While lighter in portion size, Ostabudin did not skimp on flavor. Here we had the opportunity of tasting three cheeses and three meats native to Iceland.

Although I am not a big cheese person, I tried all three types of cheeses and was pleasantly surprised by how much I enjoyed each one. Daniel prepared for us a black gouda, a golden cheese (similar to brie), and a blue mold cheese (similar to bleu cheese). All three cheeses were packed with flavor and very different from the cheeses I typically have in the states, such as parmesan or mozzarella.

The first type of meat we were given to taste was a cured lamb, which I thought was incredibly tasty. The texture on this meat may be difficult to stomach if you are not a fan of rare meats, as it was rather chewy and extremely flavorful. The second type of meat looked similar to the cured lamb, but Daniel revealed to us that it was actually cured horse meat. My mind immediately flashed to the adorable miniature Icelandic horses I loved so dearly, but I erased that image and forced myself to try a bite of it. When in Rome, right? The taste was not bad, and I am very glad I tried it, but I’m not sure I’ll be eating horse meat again, as I can’t seem to fully forget the adorable Icelandic horses. Finally, we were given a bit of arctic goose to try with an Icelandic raspberry sauce on top. This was delicious, and I would love to eat more of it next time I visit Iceland.

After we left Ostabudin, Daniel took us across the street to an insignificant looking building. Looks can be deceiving, however, as Daniel revealed to us that this was the site of the former Reykjavik prison, with a nightclub on the top floor. I had a hard time picturing myself having a drink and dancing above a prison, but others in the group thought nothing of it.

After our ice cream tasting, Daniel generously offered to order us a round of hot chocolates to take with us as we continued our tour outside. The hot chocolate was just the thing I needed on a cold March day in Iceland while exploring the city by foot. 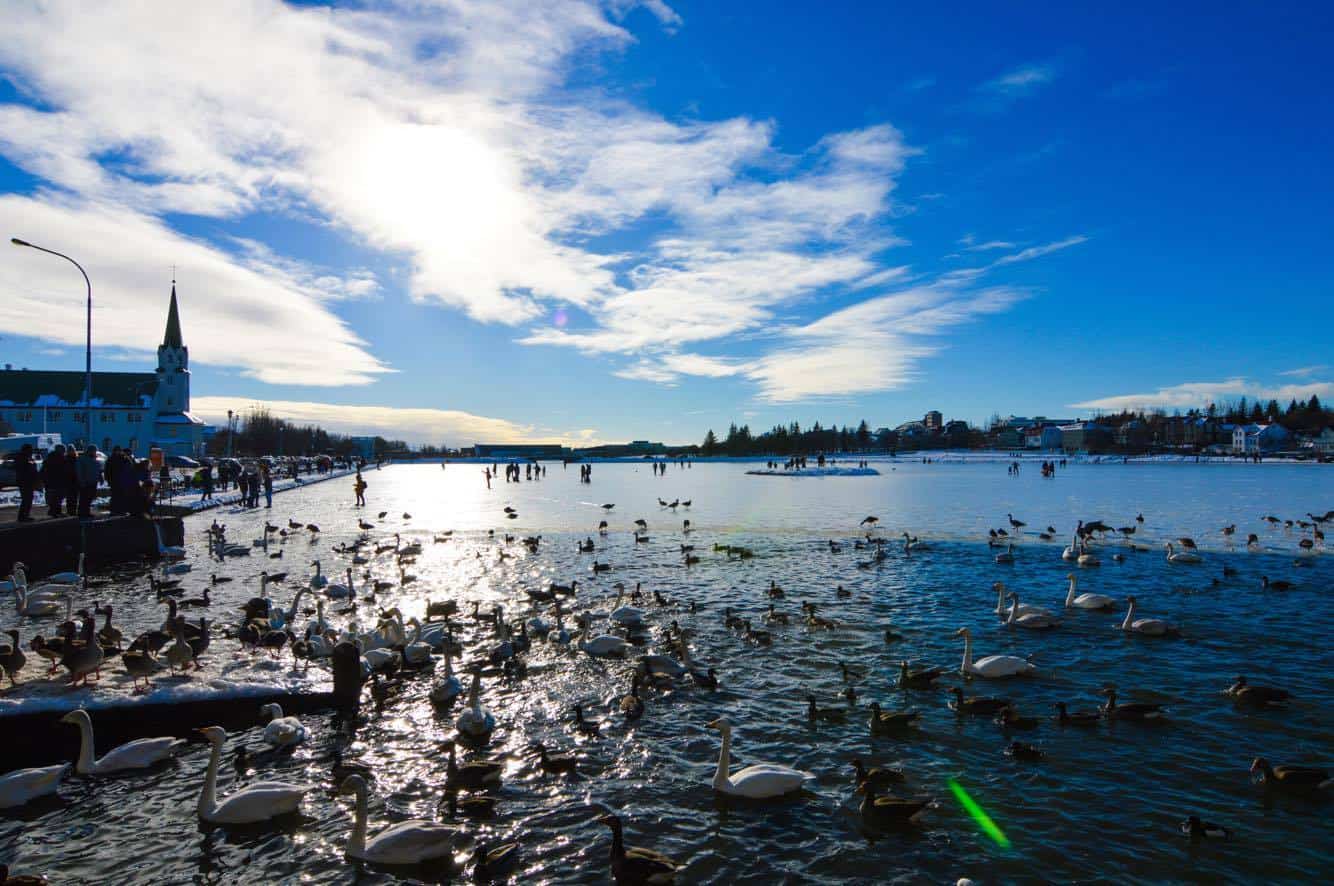 Our next stop on the food walk was the large pond in the center of Reykjavik. The pond was mostly frozen over, and we saw some people playing on the ice. I wondered what we would be doing there as I did not see any restaurants nearby. That’s when Daniel pulled out a Skyr yogurt from his backpack and told us that Skyr is one of the most basic foundations of an Icelandic diet. Icelandic yogurt tastes similar to Greek yogurt and has a bit of a sour taste without any added flavoring. Daniel brought one cup of plain Skyr for us to try and gave each of us our own flavored Skyr yogurt. By this point, I was starting to get quite full, so my boyfriend and I were happy to split one cup of yogurt between the two of us.

While eating our Skyr yogurts, Daniel continued to lead us through Reykjavik toward Austurvöllur Square, a public square and popular meeting place where Icelanders go to have lunch on a nice day, or more seriously, hold protests. One such protest occurred in 1949 when Iceland joined NATO and police used teargas to dispel the rioters.

Not far from Austurvöllur Square is Bæjarins Betzu Pylsur, a food stand famous for its hot dogs. Traditional Icelandic hot dogs come loaded with onions, ketchup, brown mustard, and remoulade (a mayo-like sauce). To order this, simply say “ein með öllu,” which means everything on it. Many famous people, including Bill Clinton, have eaten here and become big fans. 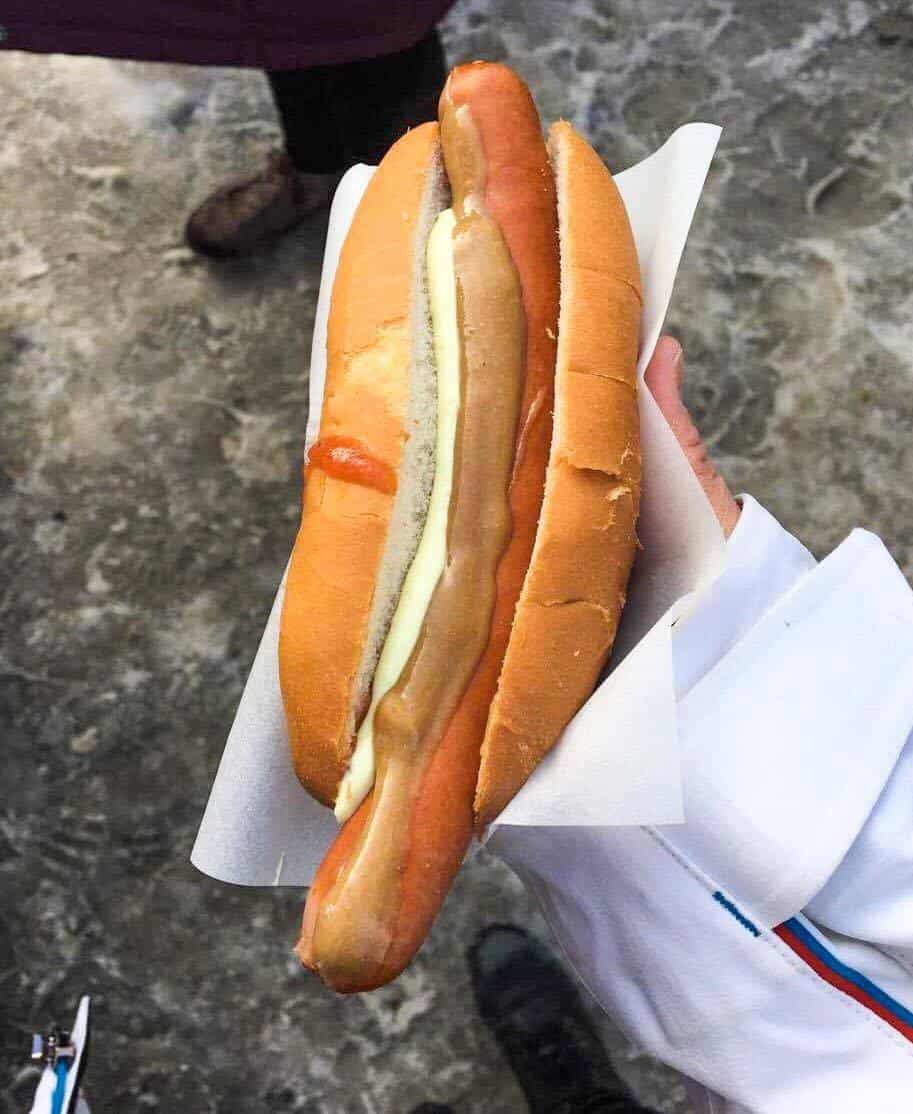 Personally, I did not find the “ein með öllu” hot dog to be exceptional. The bun was not toasted, the hot dog was quite plain, and the sauces were not particularly flavorful. This isn’t to say it didn’t taste good – it did – but it did not live up to its hype. Out of all the dishes on the food tour, I was least impressed with the Icelandic hot dog.

Next, we headed toward the wharf, and Daniel led us inside a restaurant called Saegreifinn, or “The Sea Baron,” which I had actually visited with my family the first time I was in Iceland back in November 2015. Saegreifinn is known for its lobster soup, and, unlike the Icelandic hot dog, completely lived up to its hype. The lobster was extremely tender, and the bisque was bursting with flavor without being overwhelming. 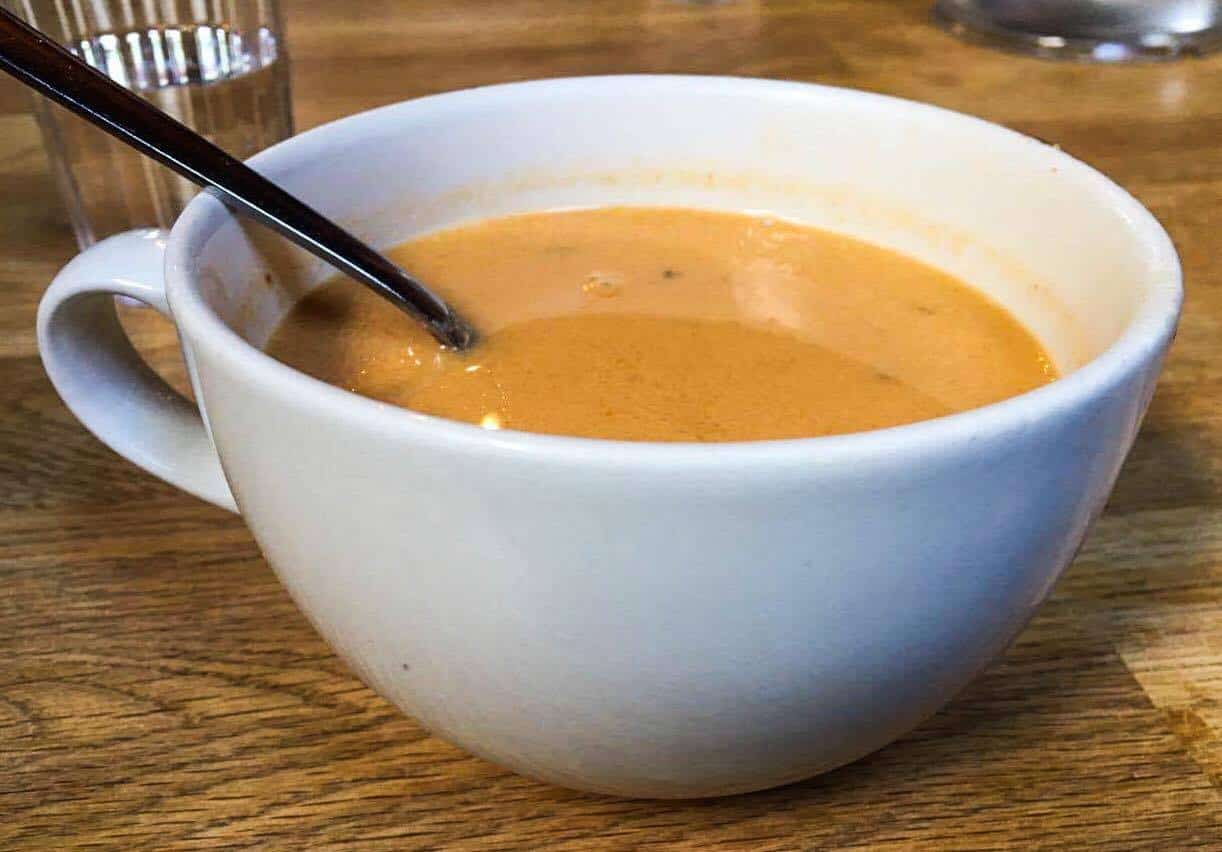 Our final stop on the food tour consisted of another tasty dessert. This time Daniel took us to Apotek, a restaurant and cocktail bar near Austurvöllur Square. Here, we had a chocolate mousse rose with raspberry puree, raspberry sherbet, and chocolate crumble. This dessert was much heavier than the rye bread ice cream we had earlier in the day, and it was the perfect way to end the tour with a bang. 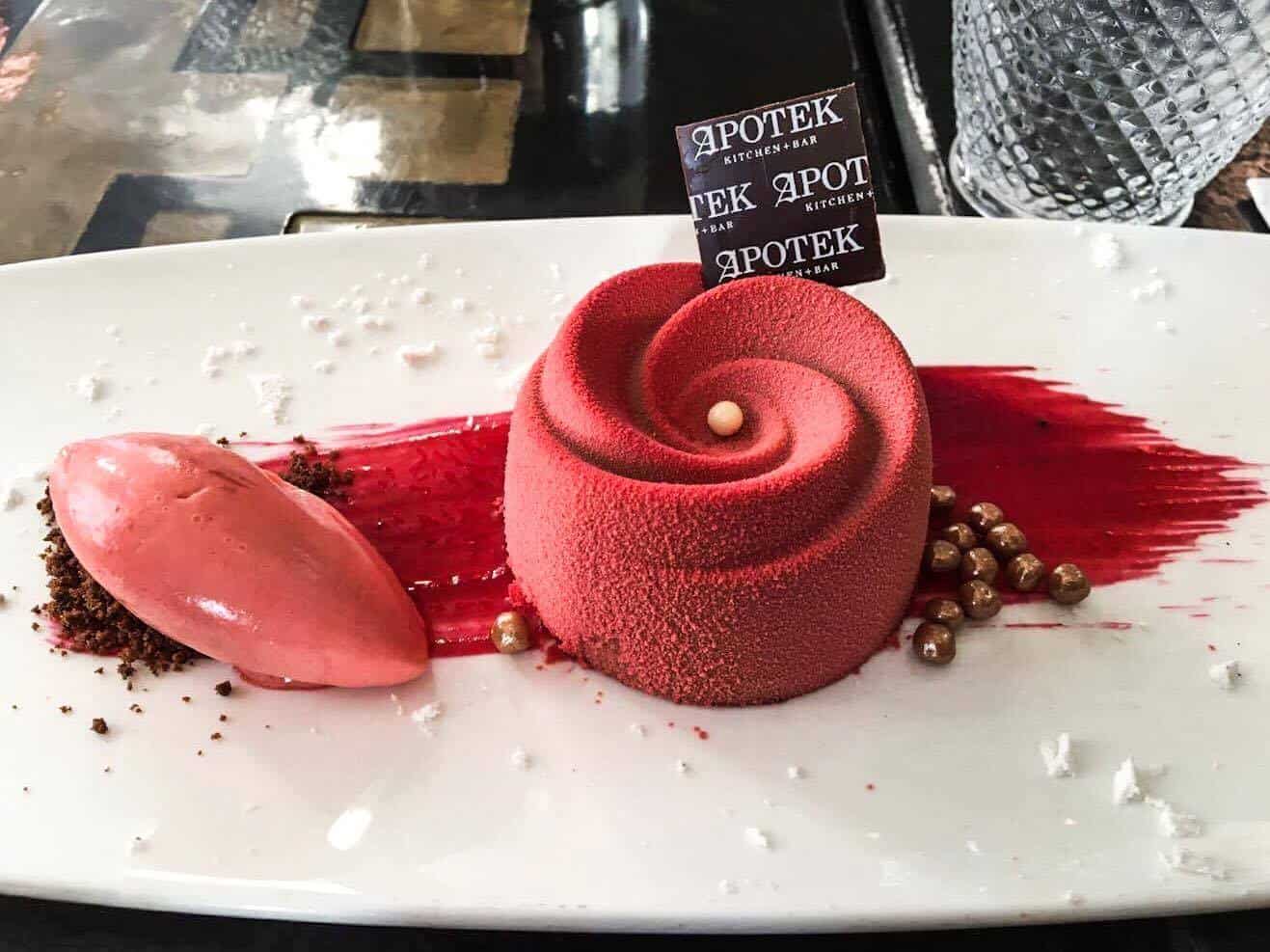 The food tour with Wake Up Reykjavik was the most delicious tour I’ve been on and the perfect way to spend an afternoon in Reykjavik. I would recommend booking the food tour on your first day in Reykjavik, as it will provide you with a good overview of Reykjavik and its history. The tour is appropriate for people of all ages and backgrounds. If you have any food allergies, be sure to notify the team at Wake Up Reykjavik ahead of time, and they will go to great lengths to accommodate. Also be sure to dress warm, as you will spend quite a bit of time walking around outside on this tour.

Click here to book a food tour with Wake Up Reykjavik, and be sure to book well in advance as these tours fill up fast!

Looking for more fun things to do in Iceland and the rest of the Nordics? Then you might want to check out these posts:

A big thank you to Wake Up Reykjavik for making this tour possible for us. As always, all opinions are 100% our own.