What We Loved, Hated, and Learned From Our 2017 Travels

2017 was a big year for us. Earlier this year we shared about our goal to travel to 17 countries in 2017, and we far surpassed that goal. As we reflect back on 2017, we decided again to provide you with the highlights from our year and answer your questions, rather than ramble on about every little experience we had on our travels. We hope you enjoy reminiscing about our 2017 travels as much as we do and that some of our stories inspire you to visit one of these incredible destinations in 2018. Here’s what we loved, hated, and learned from our 2017 travels. 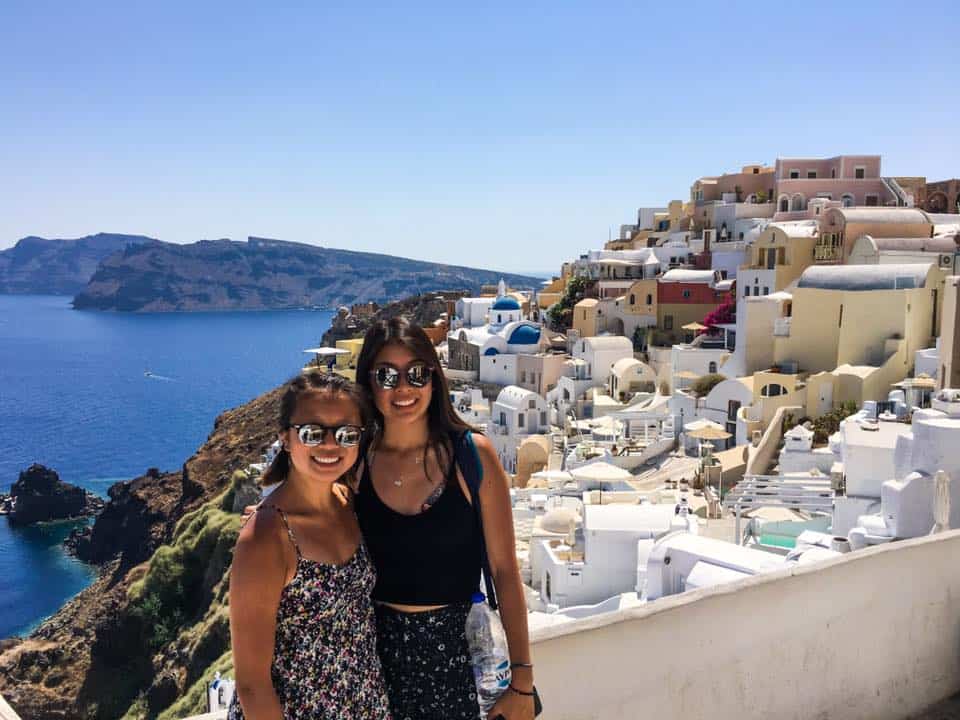 What was your most memorable travel moment of 2017?

Diana: My most memorable travel moment was also my most difficult. Traveling to Morocco alone as a female opened up my eyes to the many injustices that women still face around the world. I quickly realized that my experience of being cat-called wherever I went was nothing compared to the inequality that women in Morocco face on a daily basis. My visit to a vocational training center for disadvantaged women showed me that women in Morocco are regularly treated as property and not as human beings with human rights. It made me feel petty about engaging in “feminist” debates with my friends at home when there are women in other parts of the world that need much more support and activism than we do. I will never forget my first visit to Morocco and hope to return again one day to work with women’s rights programs there.

Hope: My most memorable travel moment of 2017 was going back to Ulm, Germany, and visiting the family that I stayed with the previous year. I visited Ulm toward the beginning of my internship in Berlin, so it was refreshing to see some familiar faces in an unfamiliar place. We went on a short trip during my time there, during which we drove through Germany, Liechtenstein, Switzerland, and Austria all in one day, and the combination of places and people I was with made it extremely memorable. 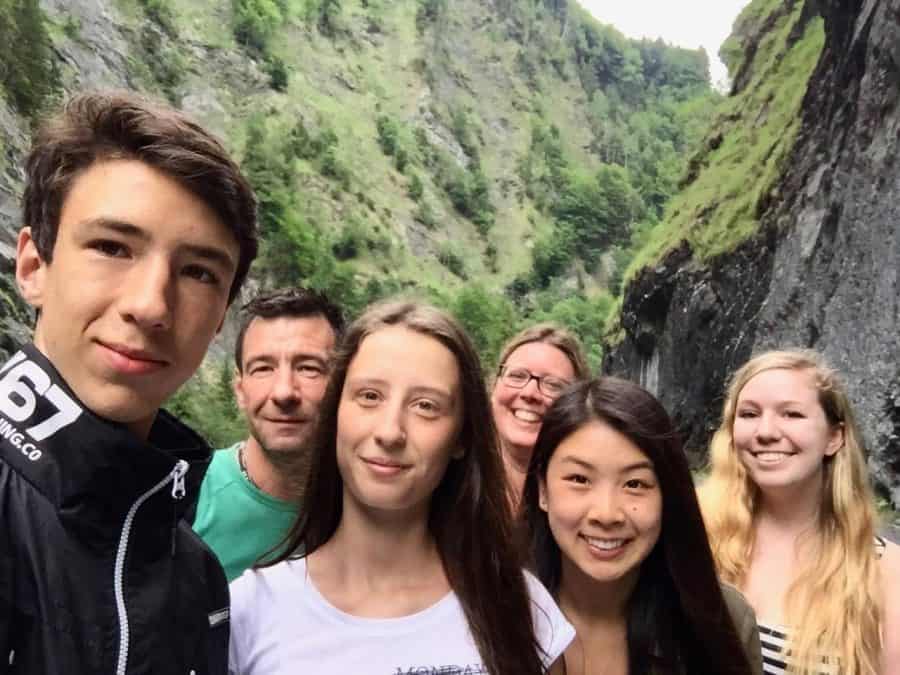 Traveling across four countries in one day with Hope’s second family from Ulm, Germany

Diana: My favorite trip of 2017 was probably the sister trip Hope and I took along the Adriatic Coast in Europe over the summer. I forced myself to learn how to drive a manual transmission car through Croatia and Bosnia, and we witnessed some of the most beautiful coastlines I’ve ever seen in Croatia. We also had the opportunity to visit Slovenia, which quickly became one of our favorite countries in Europe. Overall, it was an adventurous yet relaxing trip and just what I needed after taking some longer, more tiring trips to Africa and Asia.

Hope: This is always the hardest question because I loved all of my travels in such different ways! I don’t know if this counts as a trip, but my favourite trip of 2017 was Berlin. I was able to spend almost three months in Berlin for an internship, and I fell in love with the city. It is a city with an incredibly rich history, and this history has allowed the city to develop its own personality, sometimes separate from that of the rest of Germany – a little grunge, open-minded, startup heavy, and welcoming of all people. 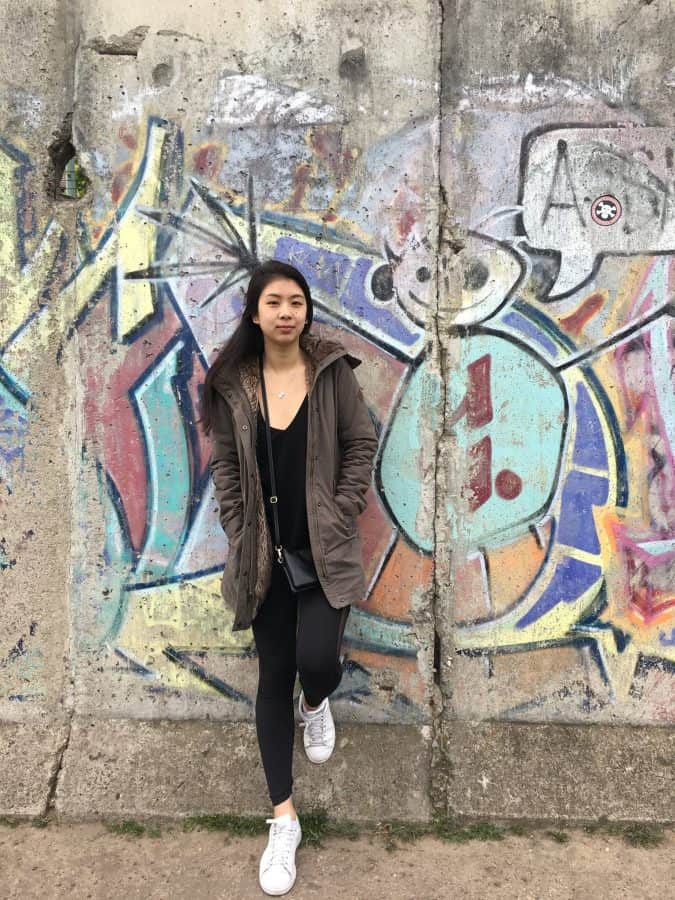 In which country did you have your best meal of 2017?

Diana: It’s really difficult to pick just one, but having the opportunity to eat pho for breakfast, lunch, and dinner in Vietnam for a couple of dollars per bowl was a dream for me. Pho is one of my favorite foods and pretty hard to come by back home – especially for those prices.

Hope: I would say that my best meal was during the cycling and culinary tour that Diana and I went on in Slovenia. We stopped in a lot of peoples’ homes and ate the food they grew, so everything was 100% natural. These were my favourite meals because even though I was eating some of the same foods I eat back home in North America, the food in Slovenia tasted healthier and made my body feel more energized.

Which country did you visit in 2017 that you think everyone should have on their bucket list?

Diana/Hope: Definitely Slovenia. When people think about travelling along the Adriatic Coast, Slovenia is usually left out of the itinerary. Even though tourism is one of Slovenia’s largest industries, it didn’t appear to overtake the country. I never felt like the streets in Slovenia were too crowded, or that all the people there were tourists. There are many opportunities to meet locals, especially if you venture a bit outside Ljubljana, the capital. The country is clean, full of rolling green hills, and very easy to travel through. Slovenians as a whole also really value the environment, and that can be seen all over the country through their eco-friendly buildings, organic foods, etc. 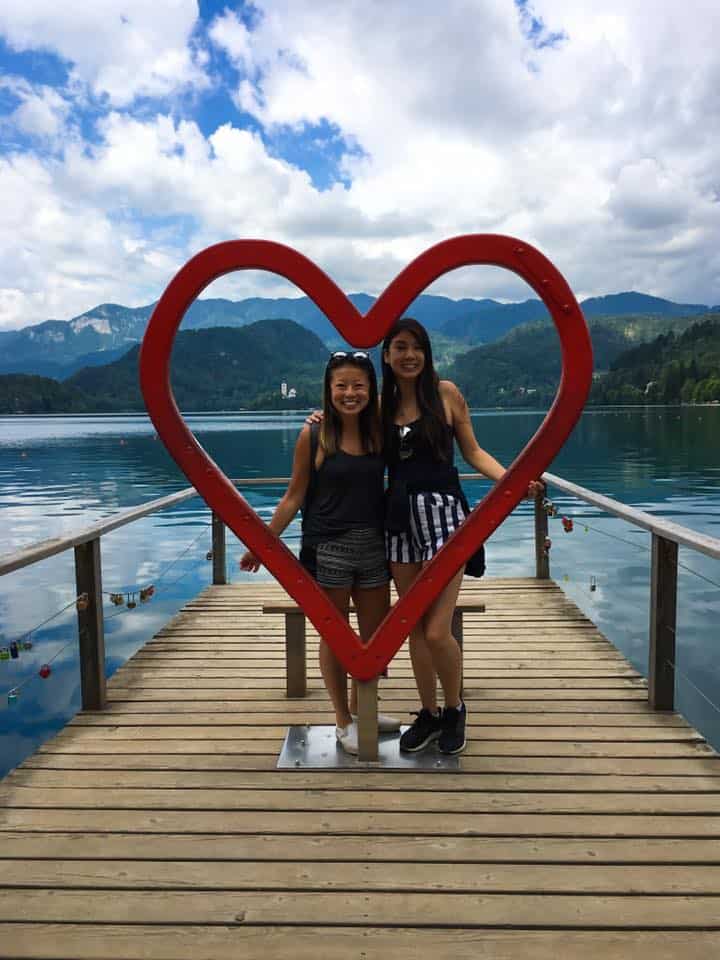 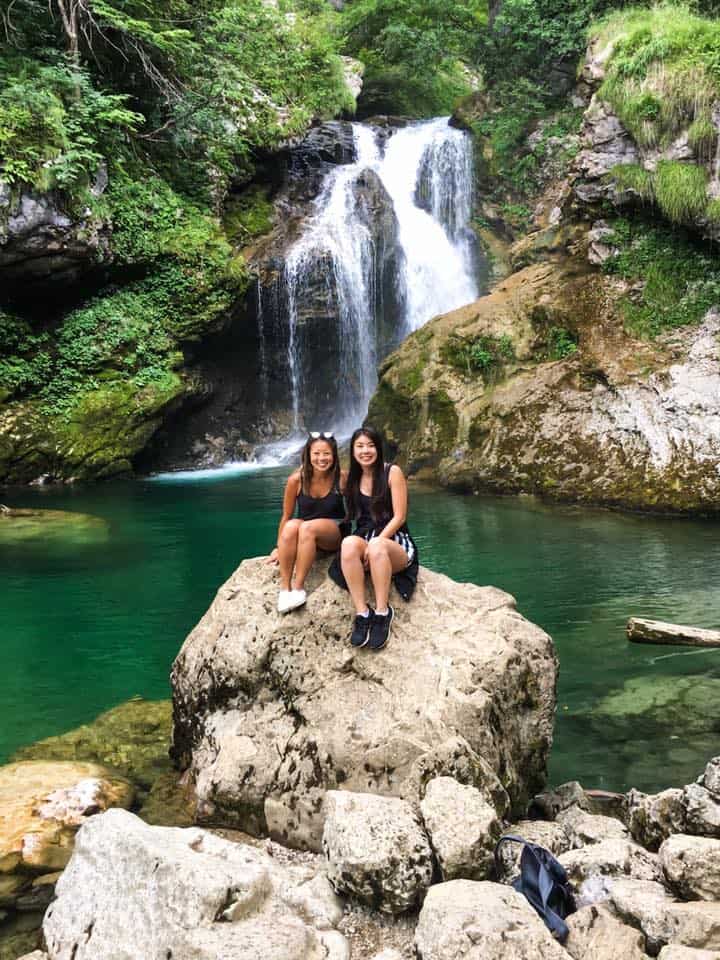 What was your biggest travel fail in 2017?

Diana: I have been pretty notorious for missing flights for at least the last few years, but one flight I missed this year really threw off my travel plans entirely and has made me much more cautious about leaving plenty of room for error when traveling to the airport. When I was backpacking around Southeast Asia in March of this year, I missed a flight from Chiang Mai, Thailand to Mandalay, Myanmar that set my travel plans back more than a full day. One day may not sound like much, but given my extremely tight itinerary, I didn’t have one day to spare. All it took was a bit of traffic and a very directionally challenged Uber driver to turn my 10 minute drive into a 40 minute drive and cost me my flight. I ended up having to book a last minute hotel in Chiang Mai that night and rearrange all my travel plans in Myanmar the next few days.

Hope: This was less of a travel fail and more of a travel annoyance. At the end of my summer Europe trip, I was supposed to fly Aer Lingus from Dublin back to Toronto. I then had to catch a flight from Toronto to Halifax to meet my family, as well as my extended family who had flown in from China. Long story short, my flight from Dublin ended up being cancelled, and I wasn’t able to fly out until the next day, which caused me to miss my flight to Halifax. The entire chain of events was a mess, and Aer Lingus refused to reimburse me for the second flight that I missed.

Was there anywhere you were planning to visit in 2017 that you didn’t end up visiting?

Diana: Thanks to my decision to quit my job back in March of this year, I was able to visit every country I had on my agenda for 2017! I traveled to over 20 countries this year and have many more planned for 2018. 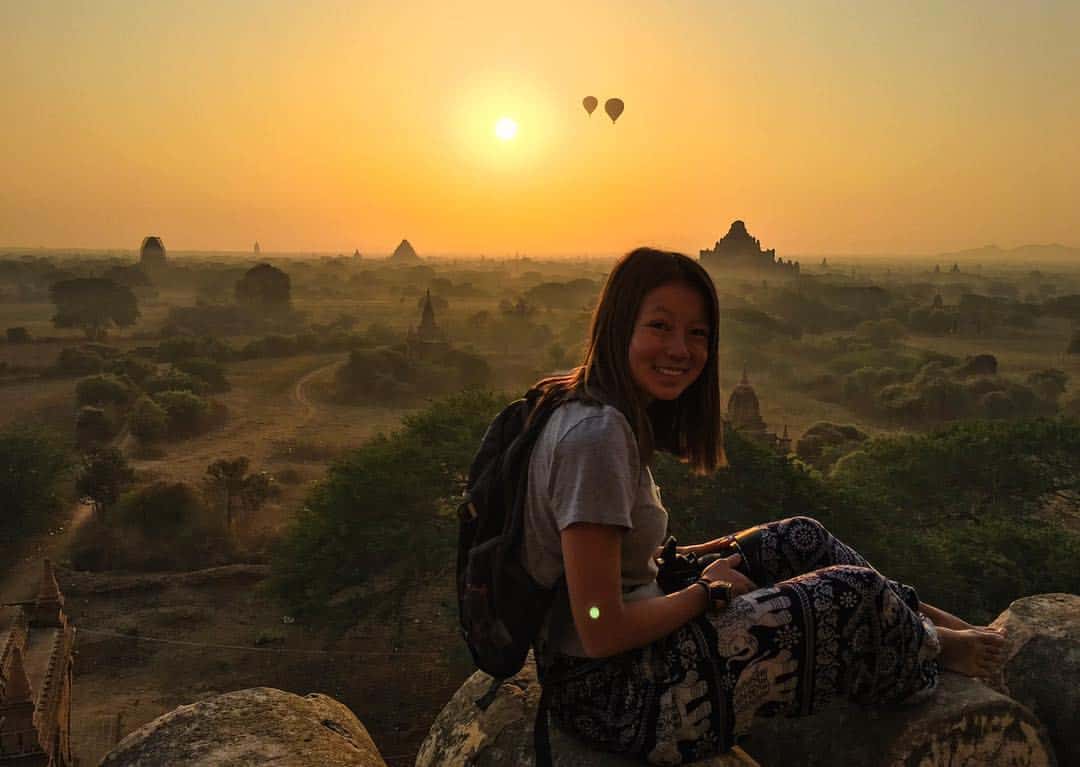 Watching the sunrise in Bagan, Myanmar

Hope:  London! It seems to be the place that always gets away. I’ve been to around 20 countries in Europe, but still haven’t been anywhere in the UK.

What was your least favorite travel experience in 2017?

Diana: My least favorite travel experience in 2017 was probably my trip to Morocco. Even though looking back, I’m very glad I went and very appreciative of all I learned from the trip, I had a very hard time enjoying all aspects of the trip while I was there. As I alluded to earlier, traveling alone as a female through Morocco basically invites nonstop cat-calling, and trying to navigate completely unfamiliar streets while being constantly approached and talked to by local men on the streets got to be a very exhausting and not so fun experience.

Hope: Diana and I visited Rome as our first destination in our second annual sister trip this summer. Rome was a beautiful city, but we went at the worst possible time. It was mid-July, so the streets were packed with tourists, and the weather was consistently 100+ degrees. The A/C in the “hotel” we were staying in was broken, and the temperature barely decreased during the nighttime. Thankfully it was our first stop, so we weren’t too worn out yet and were able to recover quickly for the remainder of our trip. 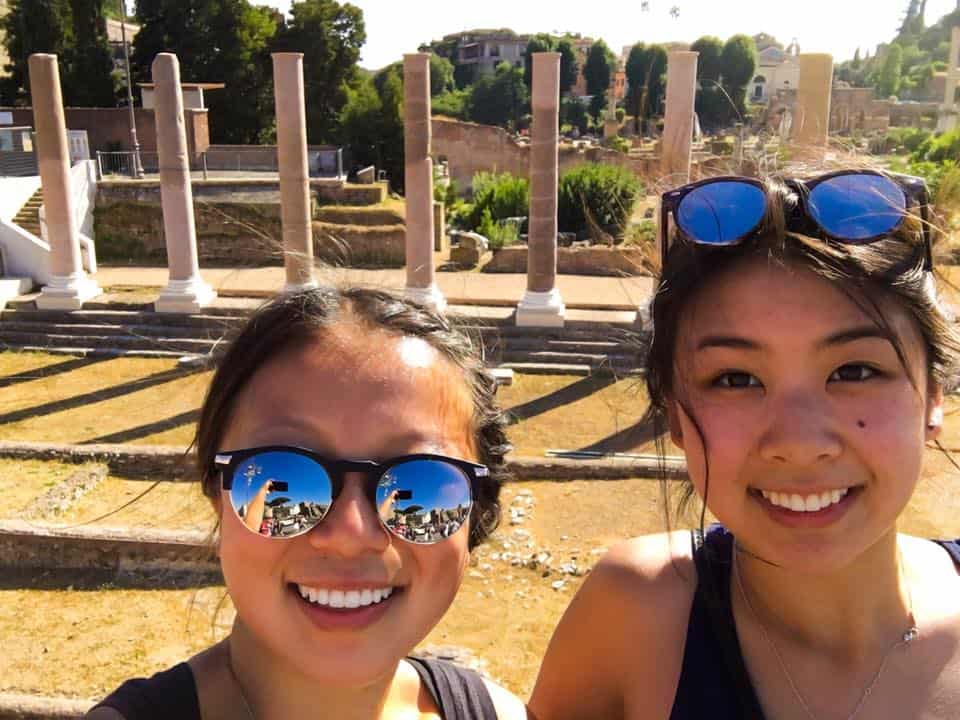 Can you tell how hot and sweaty we were?

Did you learn any big lessons from your travels this year?

Diana: I learned that I love having a home base. After traveling nonstop from March to August, I really missed being home, sleeping in my own bed, being around my friends, and being in a familiar environment. I always thought I would love to travel full time, but after traveling for just a few months this year, I longed for home. Now, I’m glad I can have a home base while traveling wherever and whenever I want.

Hope: I learned that I don’t always need to travel so quickly. I revisited a lot of places that I had been to before this year, such as Paris, Oslo, Mexico City, and more. My goal before had been to see as many places as I could, but I realized that visiting old places is equally, if not more, rewarding. Going back a second time helped me discover different parts of the cities and build strong connections with the places.

Which country did you visit in 2017 that was least like what you expected it to be?

Diana/Hope: We’ve talked a lot about Slovenia in this post, but the reason is because it really caught us off guard. We knew close to nothing about Slovenia before going, except that it was part of the former Yugoslavia. After visiting, we learned that Slovenia had only been in the Yugoslav War for 10 days, so it didn’t experience nearly as many aftereffects of the war as some other countries experienced. We also had assumed prior to visiting that the Slovenian language would similar to that of the rest of the region, but the Slovenian language is actually quite different from Croatian and Serbian, which are more alike. 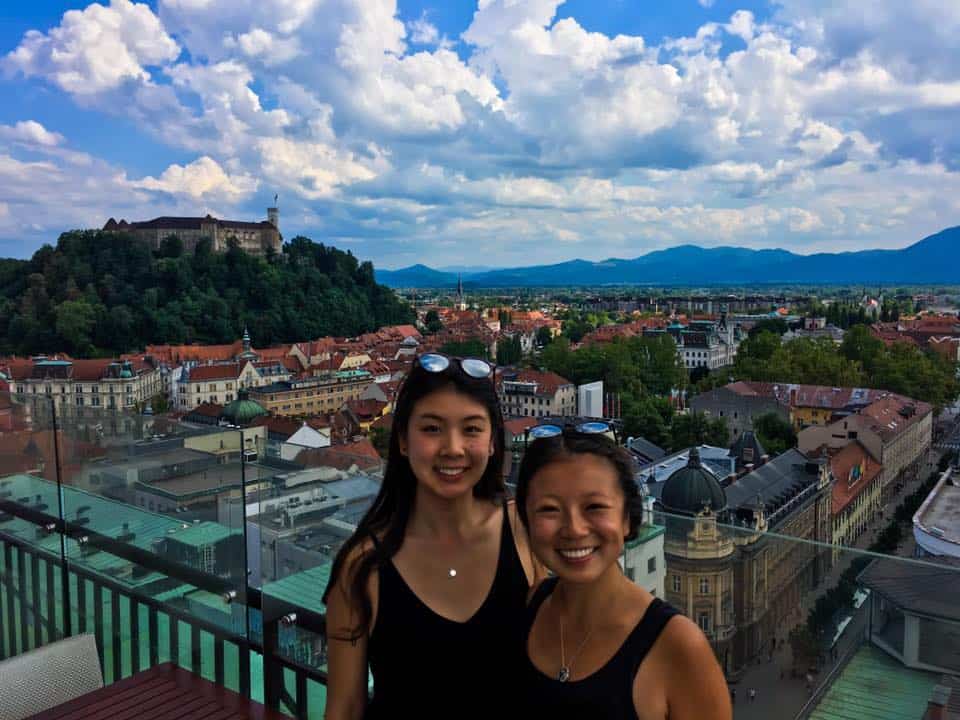 At the top of Skyscraper in Ljubljana, Slovenia

What are some of your travel bucket list items for 2018?

Diana: I have three big trips planned for 2018 so far and am sure I will be adding in more as the year goes on. My first big trip is to Tanzania and Rwanda for three weeks in February and March 2018. I plan to spend my first week hiking Mt. Kilimanjaro, and the remaining two weeks in Kigali, Rwanda and in Zanzibar. My second big trip is to Israel and Jordan in April. I have never been to the Middle East before, so I am very excited about this trip. Finally, the third trip I have planned for 2018 at the moment is Oktoberfest in Munich, Germany in the fall. Some other countries I have on my radar for 2018 are Romania, Bulgaria, Ukraine, and Iceland for a third time. 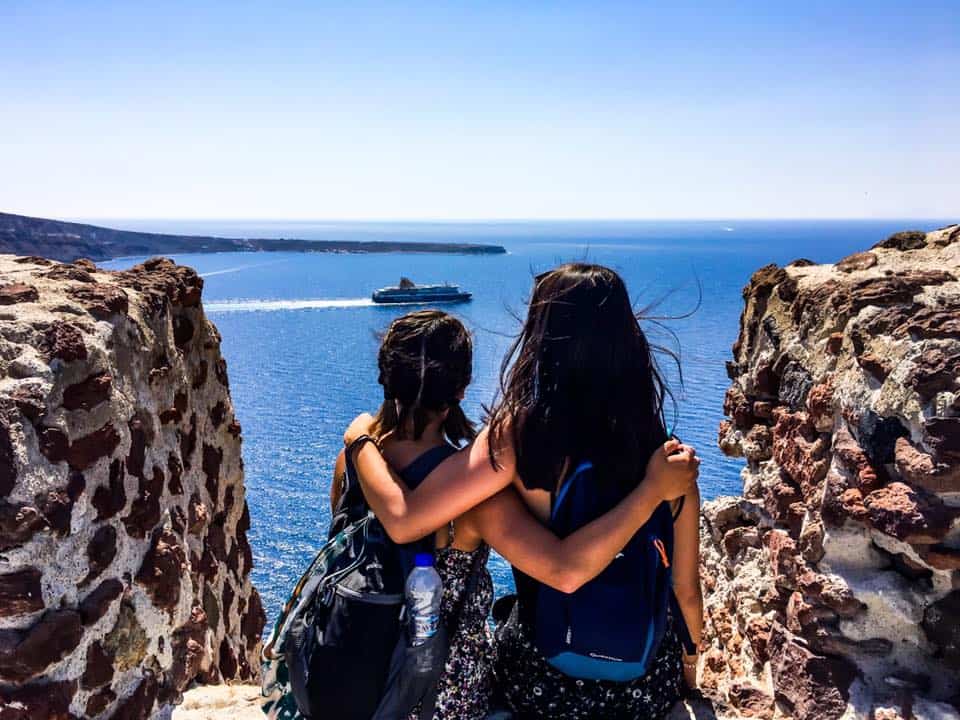 Thanks for all your support this past year, and we look forward to bringing you many more travel stories, tips, and laughs in 2018! What were some things you loved, hated, and learned from your 2017 travels? Tell us in the comments below! 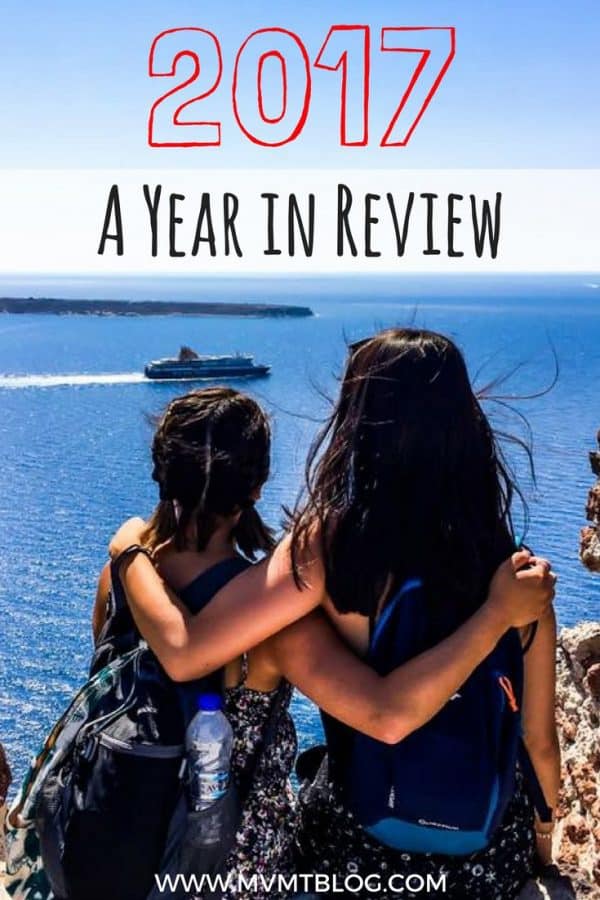 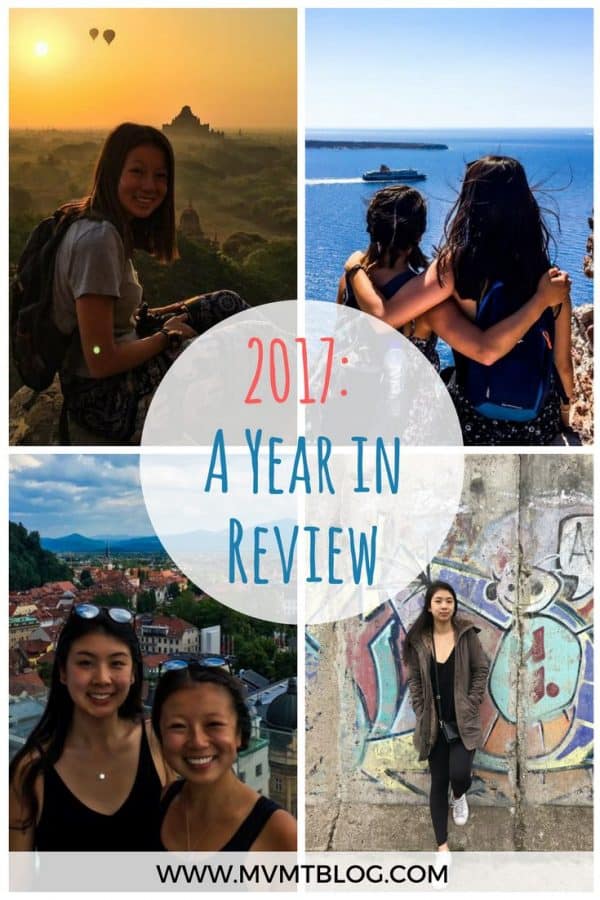