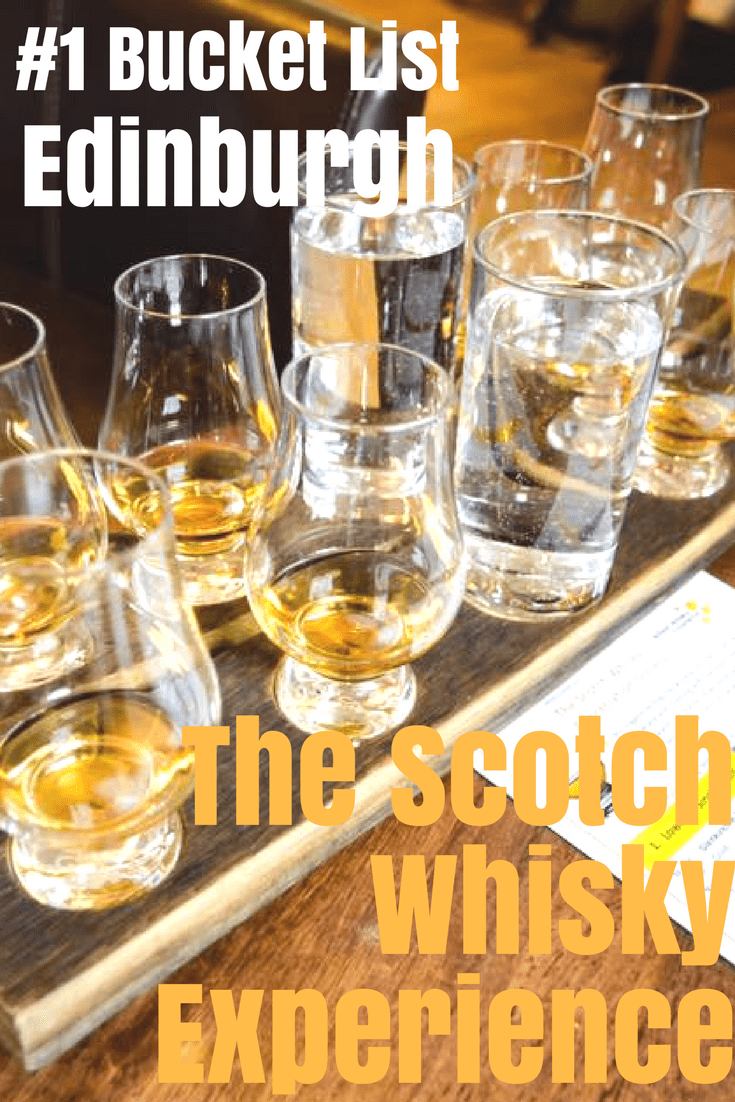 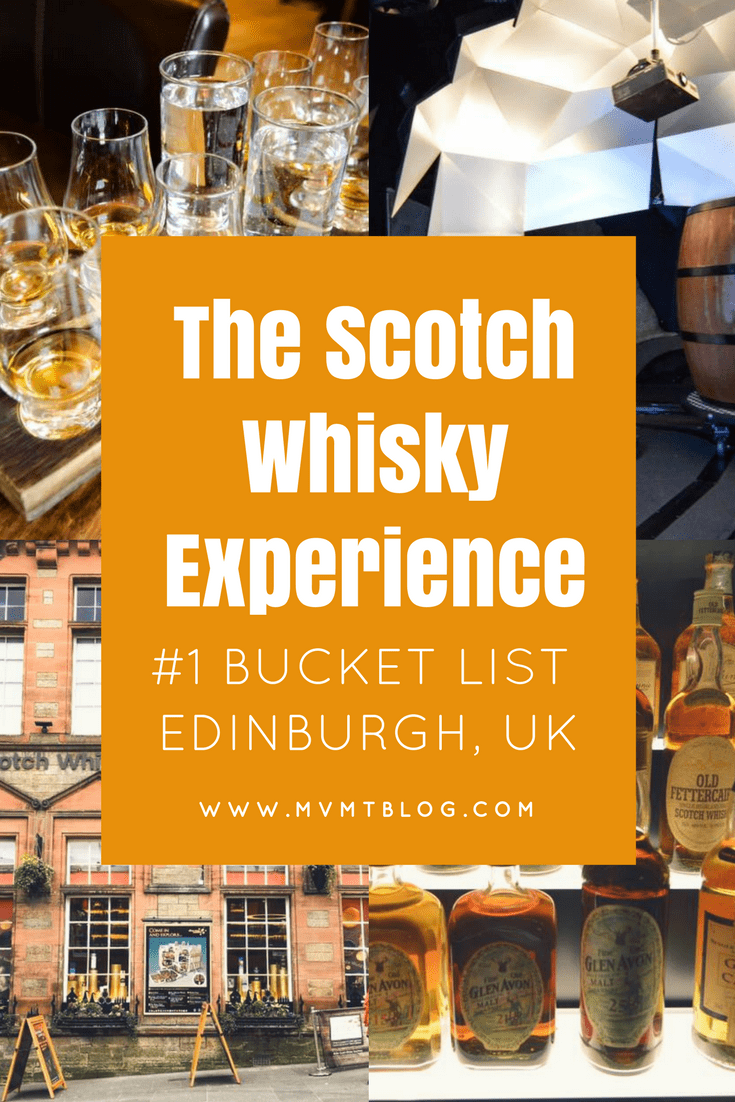 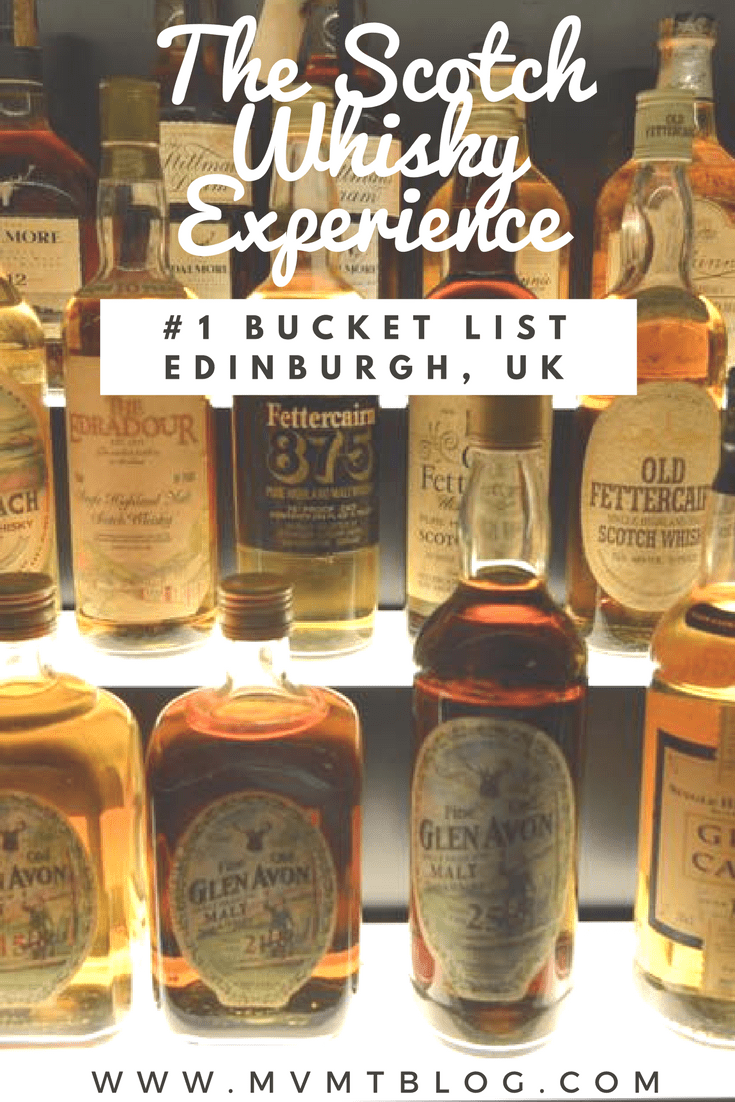 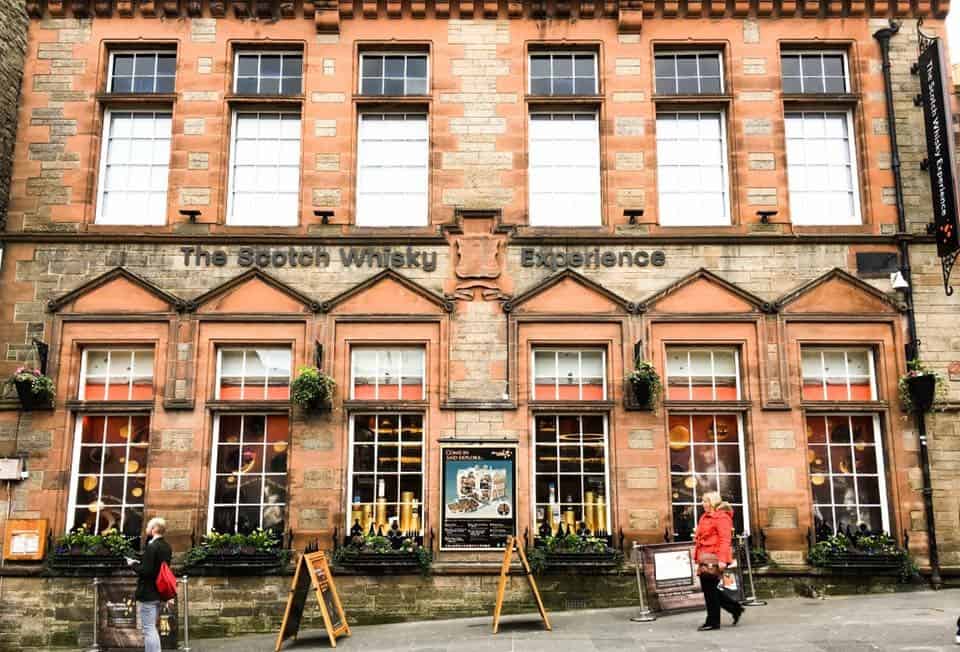 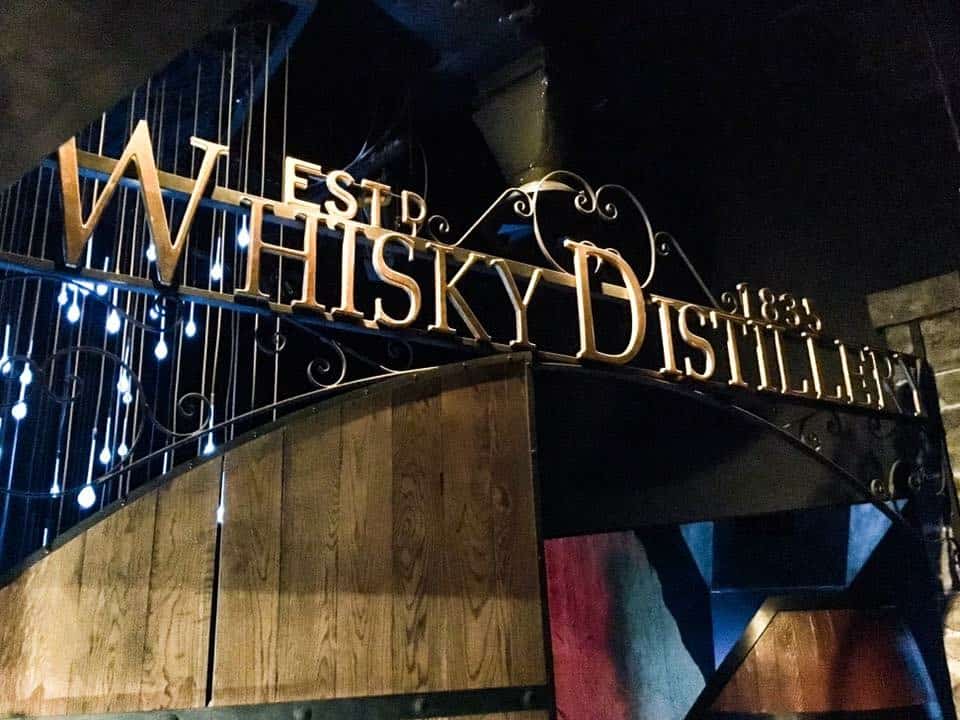 If you are not interested in the sampling tray, or if you are on a tight schedule, you may opt for The Silver Tour, a 50 minute tour that includes the educational presentations on how Scotch whisky is made and a small dram of a whisky from the region of your choosing, but does not include free tastings at the end of the tour. If you opt for The Silver Tour and later change your mind (or are peer pressured into upgrading to The Gold Tour by your fellow tour members like some were on our tour), you may do so at any time during your tour.

The price of The Gold Tour is £26.00 and the price of The Silver Tour is £15.00. For non-drinkers and those under age 18 (the legal drinking age in the UK), The Scotch Whisky Experience offers Irn Bru, Scotland’s other national drink, in lieu of whisky. As long as you are interested in learning about Scotch whisky, The Scotch Whisky Experience will find a way to accommodate to your specific needs. 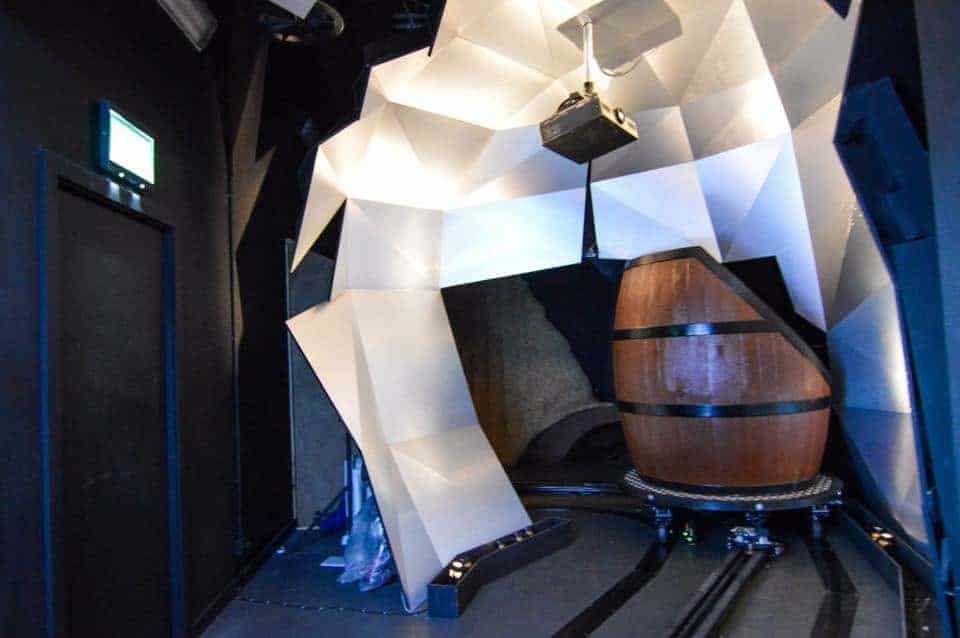 The Gold Tour began with a ride in a whisky barrel through the many stages of Scotch whisky production. As someone who is more of a casual whisky drinker, I was curious to learn about how whisky is made. It is similar to the production of beer, in that both require grains, water and yeast which allow for fermentation into alcohol. Whisky, however, goes through a distillation process which evaporates the liquid and then condenses the alcohol.

The final stage of the process is maturation, which takes place in large barrels or casks, usually bourbon or sherry. The type of cask used will contribute to the flavor and color of the Scotch. According to Scottish law, a whisky must age for at least three years in order to be sold as Scotch whisky. However, as each batch ages in the casks, some of the alcohol is lost to evaporation, known as the angels’ share. The barrel ride provided all of this information and more using entertaining visuals along with commentary from a unique tour guide. It perfectly set the stage for the rest of the tour. 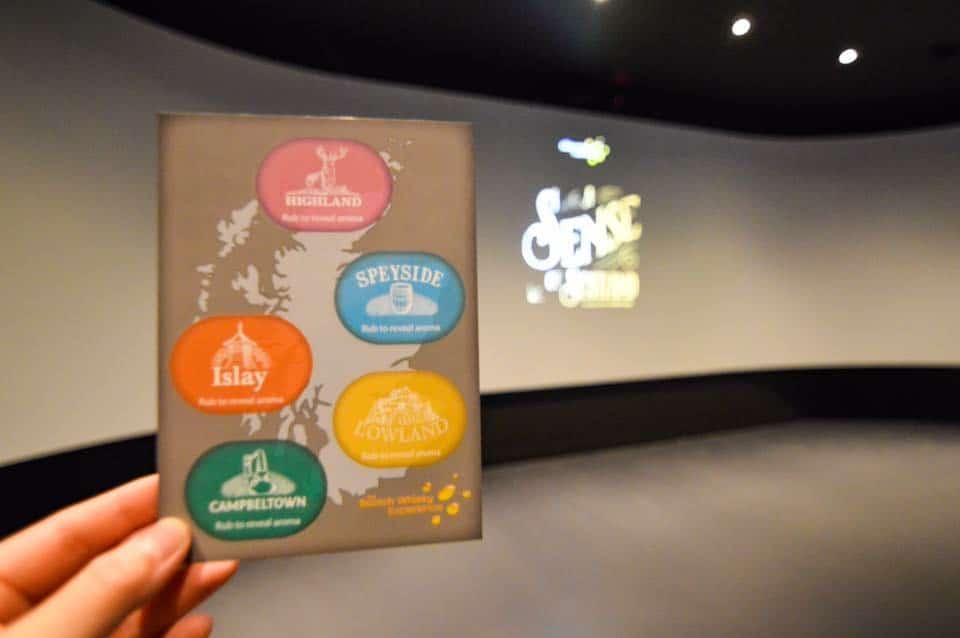 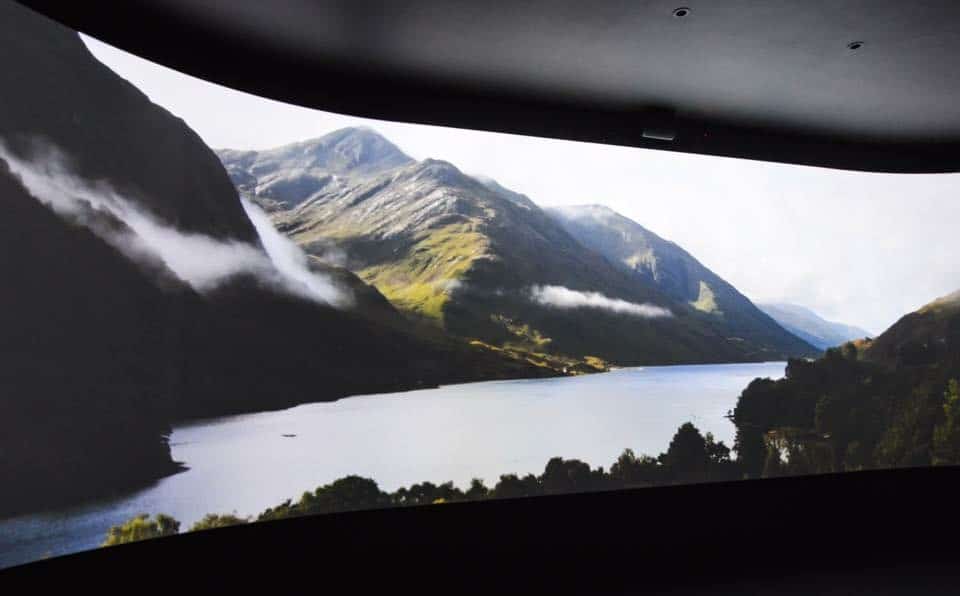 Next, we were taken into a theater room where we were shown footage from the five different regions in Scotland that produce their whisky: the Highlands, the Lowlands, Speyside, Islay, and Campbeltown. Each region produces whiskies with slightly different flavors that take on some of the characteristics of their environment. For instance, the Islay region produces some of the smokiest-flavored Scotch. Other regions’ whiskies have more floral or citrus notes. Along with the video, we were given a “scratch-and-sniff” card which produced the aromas to correspond with each region’s whisky flavors. This part of the tour increased our excitement to try some of these whiskies, while also enticing us to visit the beautiful scenery throughout the rest of Scotland. 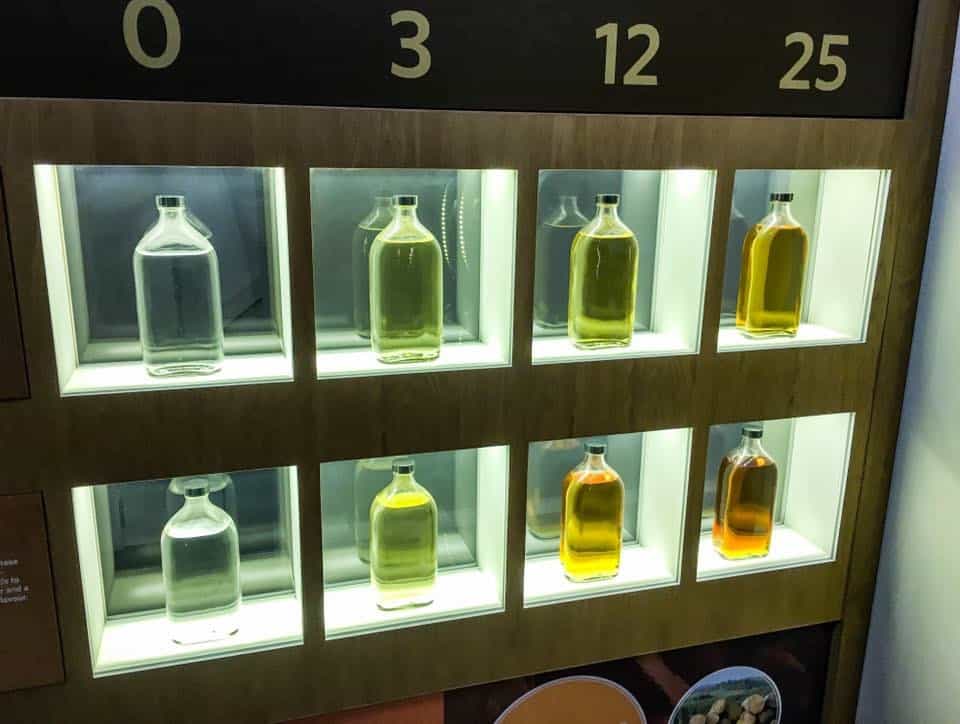 We were then taken into the Blender’s Sampler Room, where we were shown a few more videos and given a little bit more in-depth knowledge about each of the whiskies from the five regions. The room itself was dark and set up like an old board room, with a large U-shaped table. In the center of the room were holographic visuals that complemented the rest of the presentation. In front of each seat on the table were whisky tasting glasses and a set of colored circles representing each of the five regions and a circle for a blended whisky. We were told to place the glass onto the circle for which region we wanted to taste and our guide came around to pour our drams. 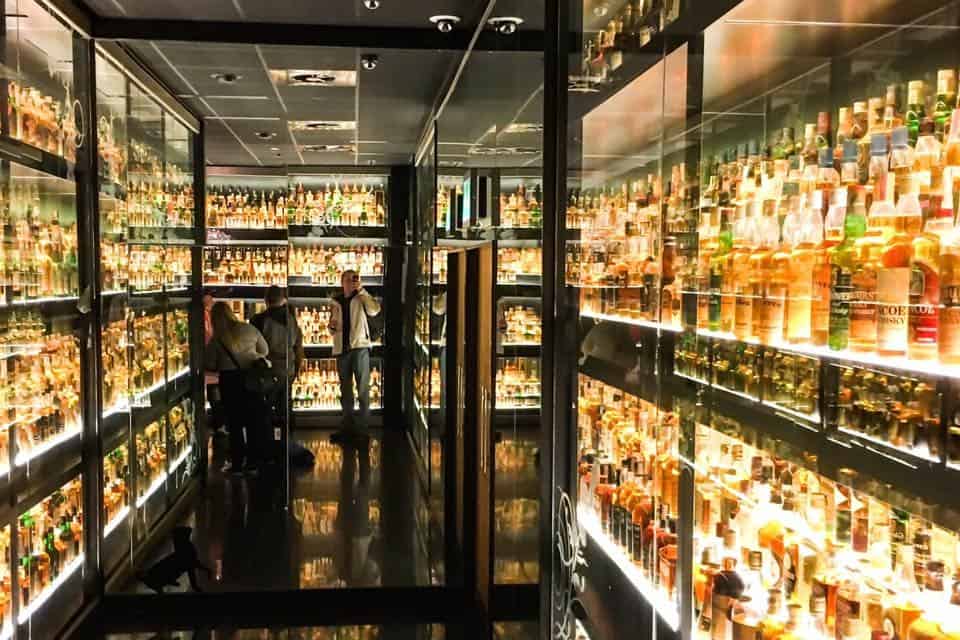 After receiving our selected drams, we headed over to The Diageo Claive Vidiz Whisky Collection, the world’s largest collection of Scotch whisky. The Collection was added to The Scotch Whisky Experience in May 2009 and comprises 3,384 bottles of whisky within a marble and glass vault. 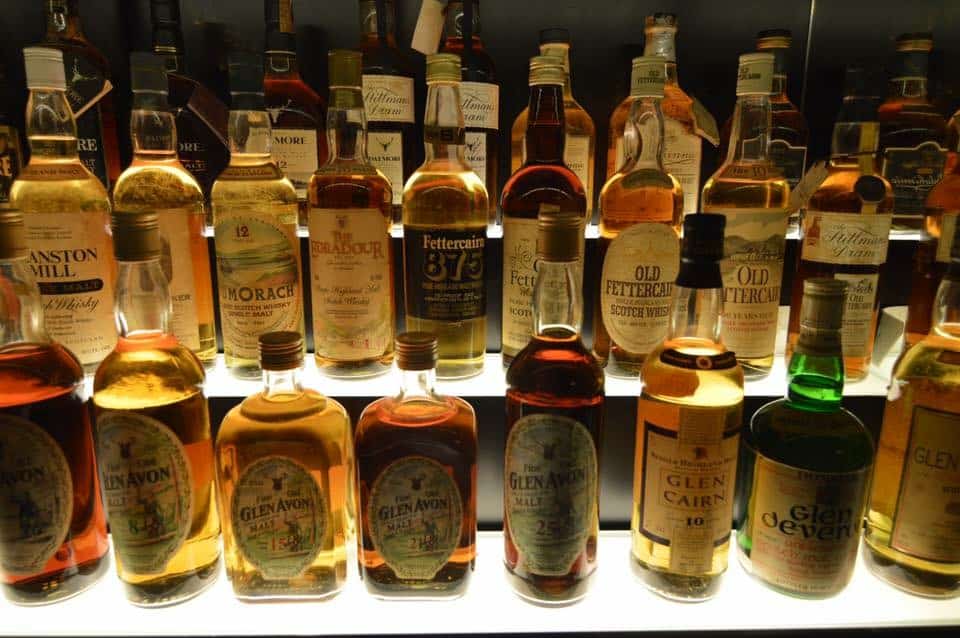 Claive Vidiz is a Brazilian whisky enthusiast who began collecting Scotch whisky in the 1970s. Over the course of 35 years, Vidiz amassed almost 3,500 bottles of Scotch whisky of varying types, costs, and rarity. In October 2006, Vidiz sold his collection to Diageo, a Scotch whisky distiller. Committed to preserving the legacy and passion with which the collection was built, Diageo decided that the best home for the Collection is at The Scotch Whisky Experience in the heart of Edinburgh. 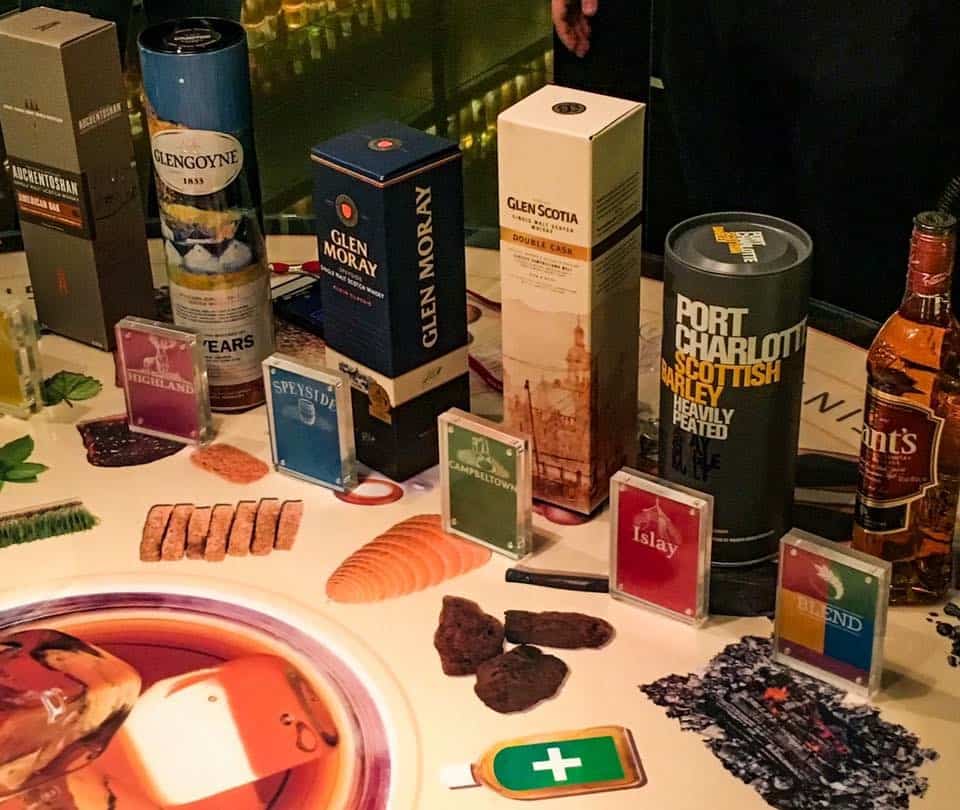 As we gathered around a tasting table in the center of the vault, our guide instructed us on how to properly taste a Scotch whisky. We were taught the proper techniques for sniffing the whisky and swirling it to determine alcohol content. The tasting was served neat, but ice water was provided for those that like to add a bit to their drink. Our guide explained that adding water can open up some different flavors in the whisky. However, the most important thing to remember in whisky tasting is that you should taste whisky in whichever way is most enjoyable for you. 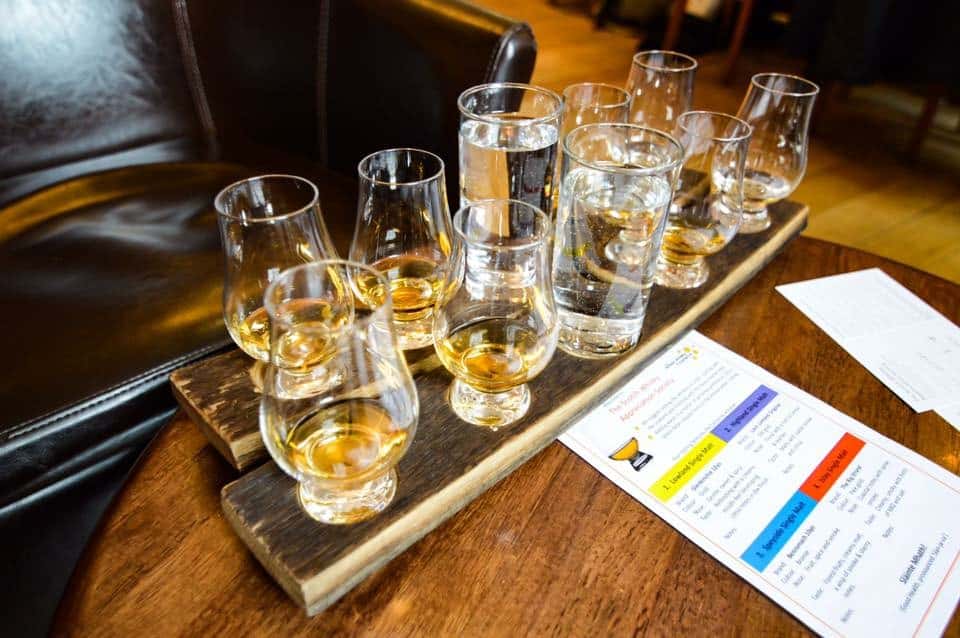 Finally, we were led into the bar area, where we received our four tasting samplers. The room was divided into several sections, with the wall opposite the bar containing additional Scotch whiskies from the Collection, including whiskies stored in chess pieces, clocks, and other interesting containers. The section closest to the windows offers beautiful views of Edinburgh, and there are cozy couches and chairs throughout. 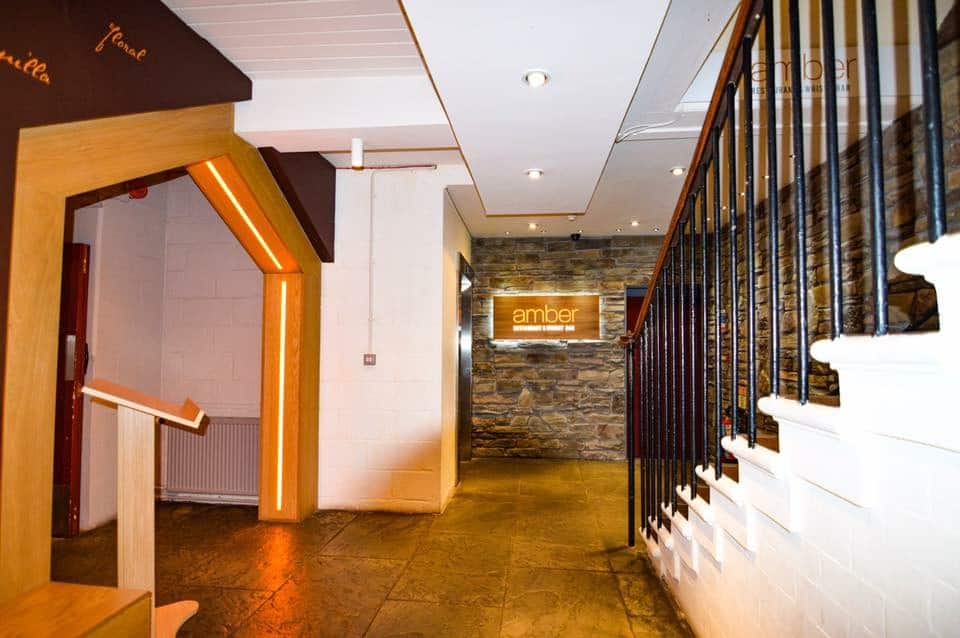 If you’d like to keep tasting the many types of Scotch whisky while having a bite to eat, head downstairs to the lower-ground floor, where you will find Amber Restaurant & Whisky Bar. The restaurant offers an authentic selection of Scottish cuisine, perfectly paired with over 450 types of single malt Scotch whiskies at the bar.

Finally, don’t forget to pick up a bottle of your favorite whisky at the Scotch Whisky Shop on your way out. There is an overwhelming total of 477 types of whisky available for purchase, so do take advantage of the trained staff in the shop to help you choose your perfect bottle. 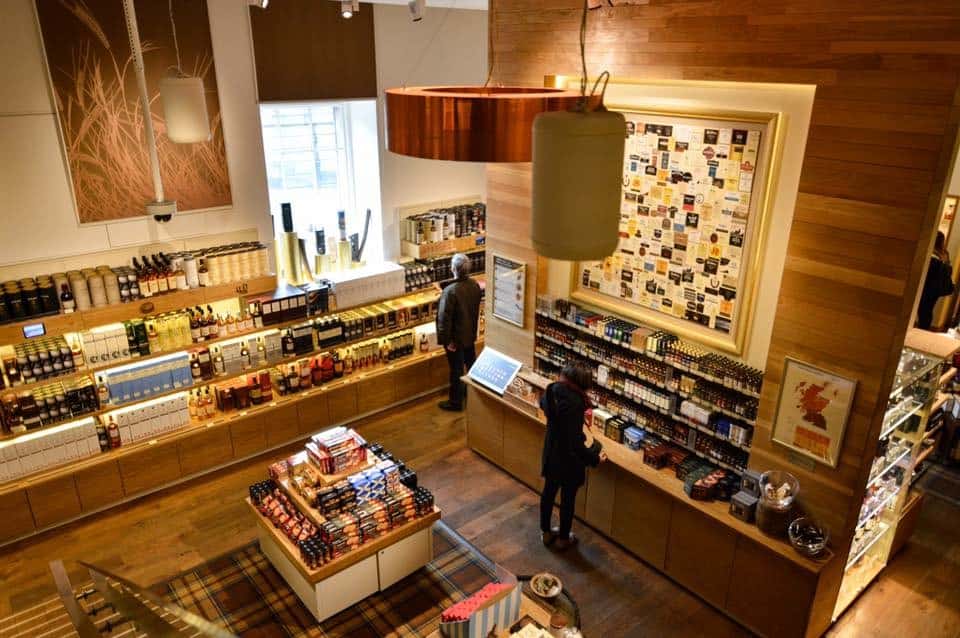 The Scotch Whisky Experience is a must do in Edinburgh and well worth the money. We ended up spending a couple of hours there because we were only in Edinburgh for 24 hours and wanted to see other parts of the city, but we could have easily spent half a day or even most of the day there. Do not miss this tour if you want to fully experience the spirit of Edinburgh!

A big thank you to The Scotch Whisky Experience for making this tour possible for us. As always, all opinions are 100% our own.