Tour Vatican City as a VIP With The Roman Guy 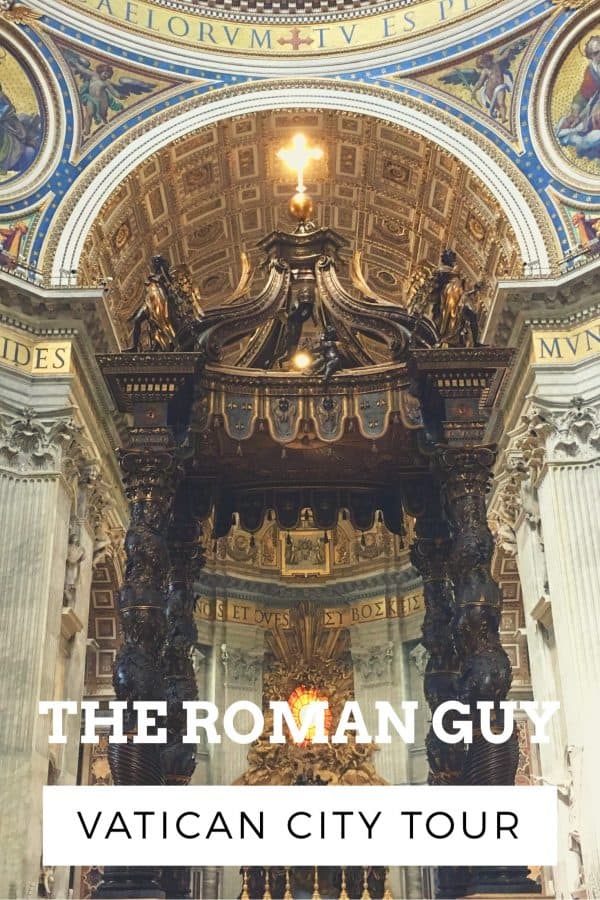 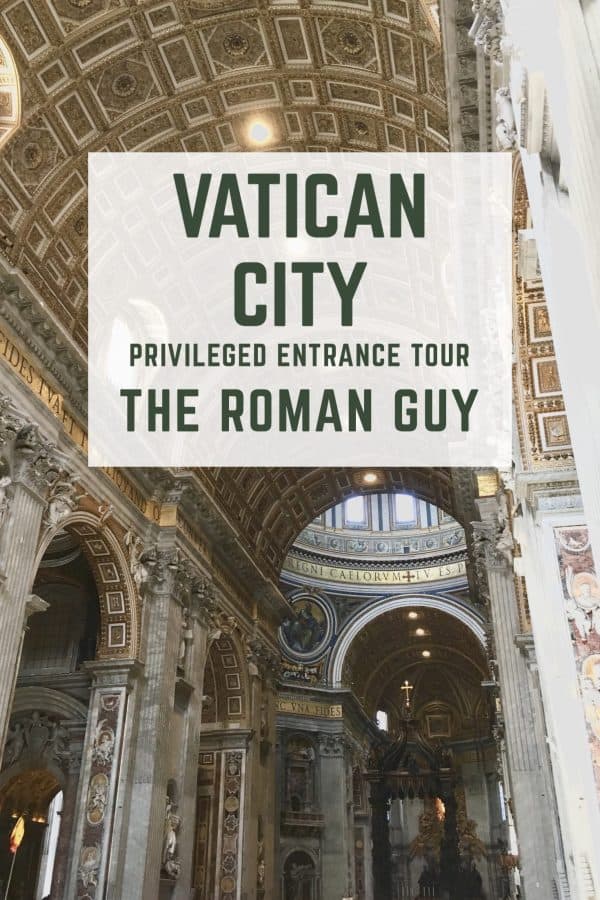 Vatican City is one place that seems to make every ‘ultimate bucket list,’ and it’s easy to see why. Even if you aren’t religious, Vatican City holds so much historical significance, and many of Rome’s must-see sites are found here. Here’s how you can avoid the lines and tour Vatican City as a VIP with The Roman Guy. 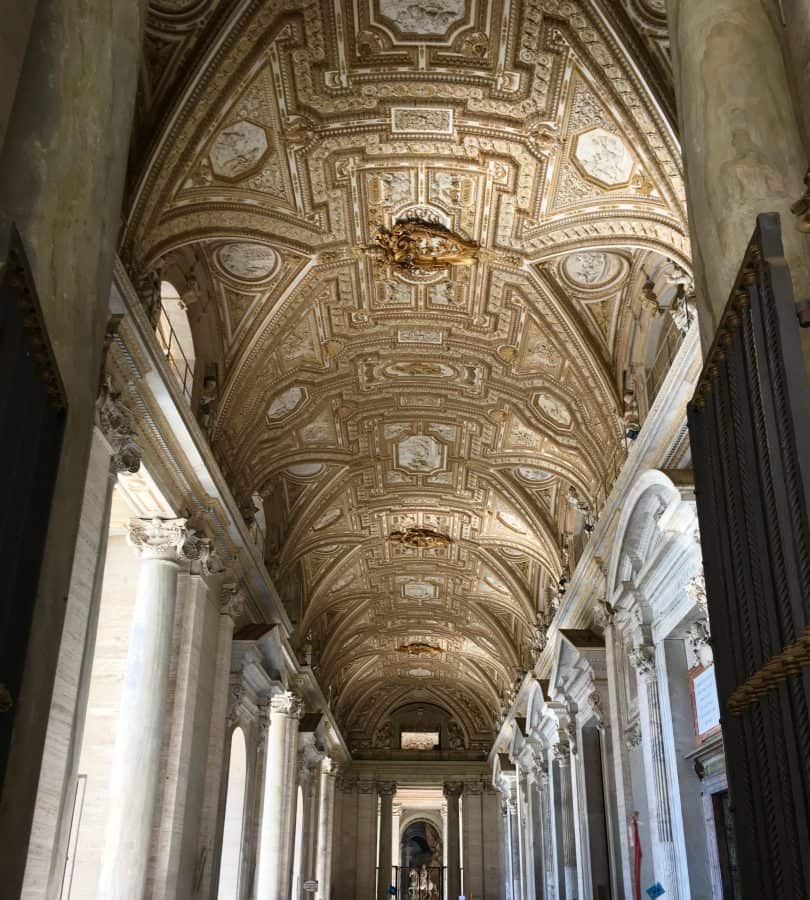 Vatican City is formally under the rule of the Pope and is considered a sovereign country. The Holy See is essentially the central governing force for Catholicism and also acts as a government for Vatican City. The city covers only 100 acres, approximately the size of the Mall of America or twice the size of Grand Central Station in New York City. The population of Vatican City is a bit over 800 (although half of these citizens live abroad due to their occupations in diplomacy), making it the smallest country in the world by both population and area. 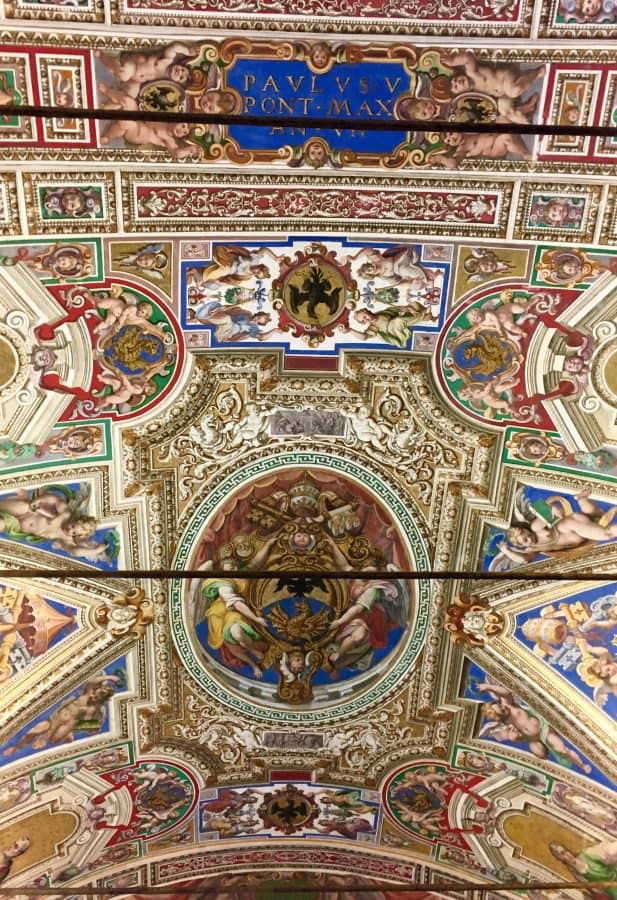 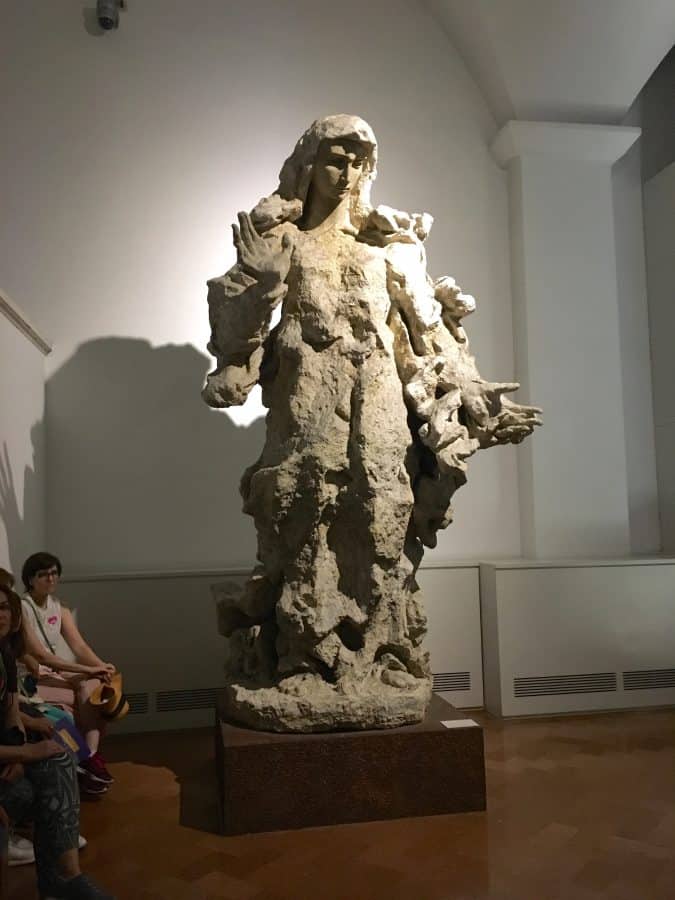 We met with our group and tour guide, Maria, at 7:30 AM outside the walls of the Vatican. We waited here for around half an hour as Maria gave us information about what we would be seeing inside the Vatican and some brief history about it. At 8 AM, the doors to the Vatican opened to us (official opening is at 9 AM), and we were able to go into Vatican City quickly and smoothly.

**One important thing to note before going into Vatican City is to be respectful of their culture and to keep your knees and shoulders covered. This isn’t strictly enforced until you enter the Sistine Chapel, so a few people in our group wore shorts and brought light scarves to tie around their waists before entering. You can and most likely will be denied entry if you fail to comply with this policy!**

Our tour began in the Vatican Museums. We walked through corridors and corridors of Roman sculptures in the Belvedere Court, through the Gallery of Maps, which contained maps of changes made to Italy’s territory, language, and structure throughout the years, and through other gorgeous rooms of art such as the Gallery of Tapestries. 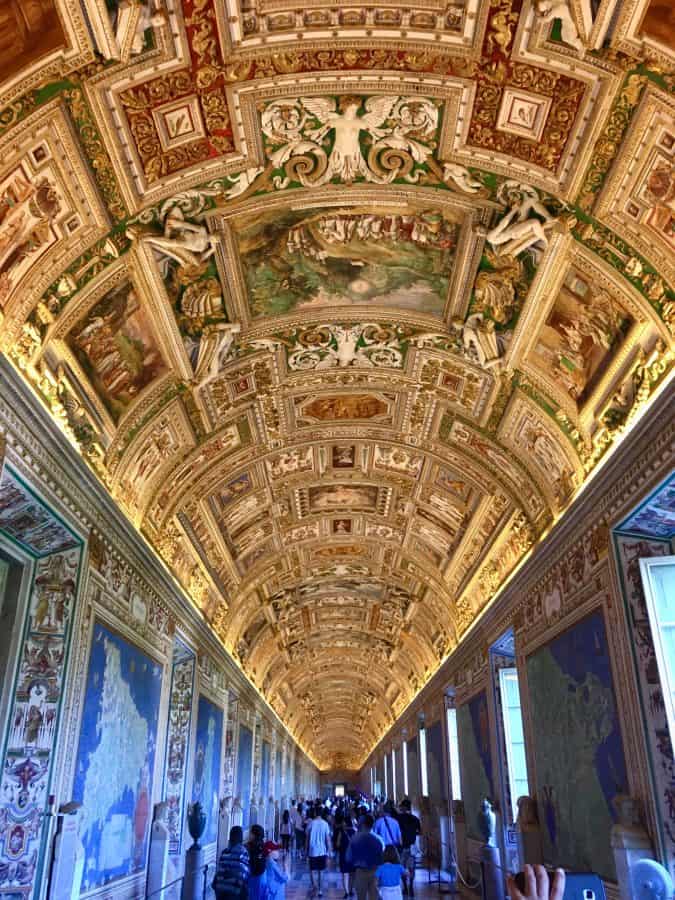 Maria regularly made stops throughout to explain significant works of art to us and to answer any questions that we had. After making our way through many rooms of the museum, we arrived at the Sistine Chapel. Maria gave us an overview of the Sistine Chapel before we went in because talking is not permitted once inside (there is a man who belts ‘silence’ into a microphone every so often). She told us about its functionality as the Papal Chapel’s official chapel, and about the paintings on the walls and ceiling of the chapel. She taught us how to read them and highlighted a few significant works to keep an eye out for (e.g. Michelangelo’s ‘The Last Judgment’). Here, we had around half an hour to walk around the chapel and ‘read’ the paintings. The chapel was truly an artistic masterpiece and walking around the room felt like flipping through the pages of an invigorating storybook. 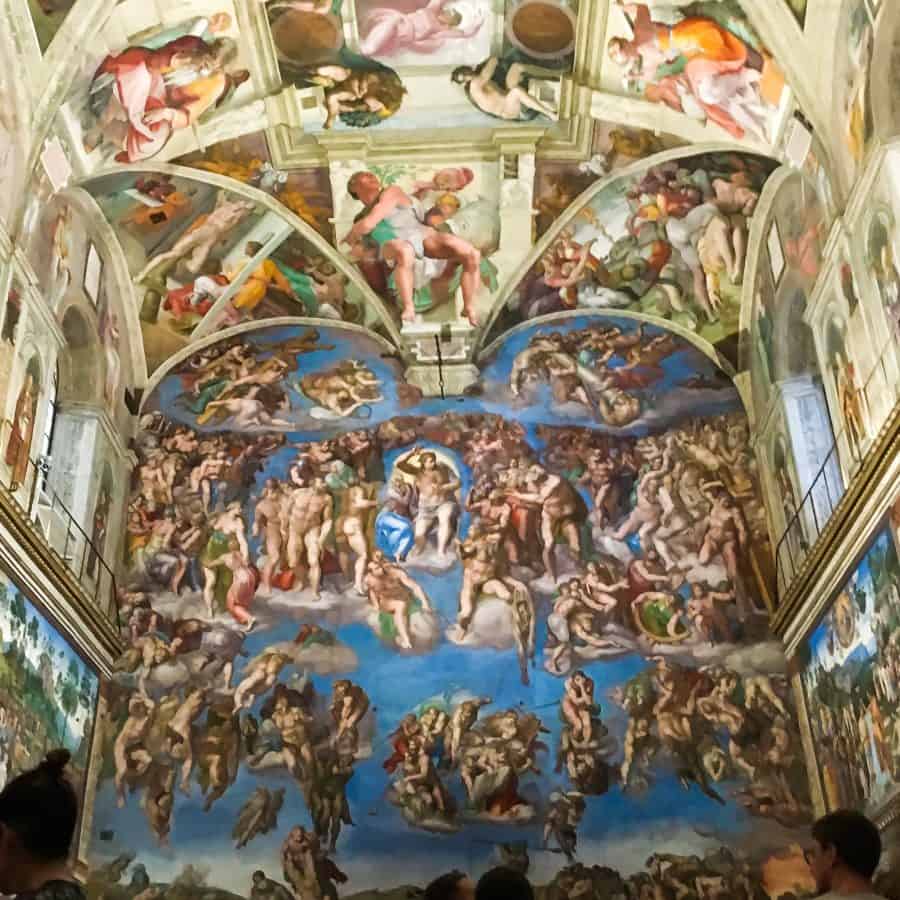 We left the Sistine Chapel and walked outside into a courtyard with a great view of St. Peter’s Basilica. We had some time here to take photos and then continued on our tour back into the Vatican museums. 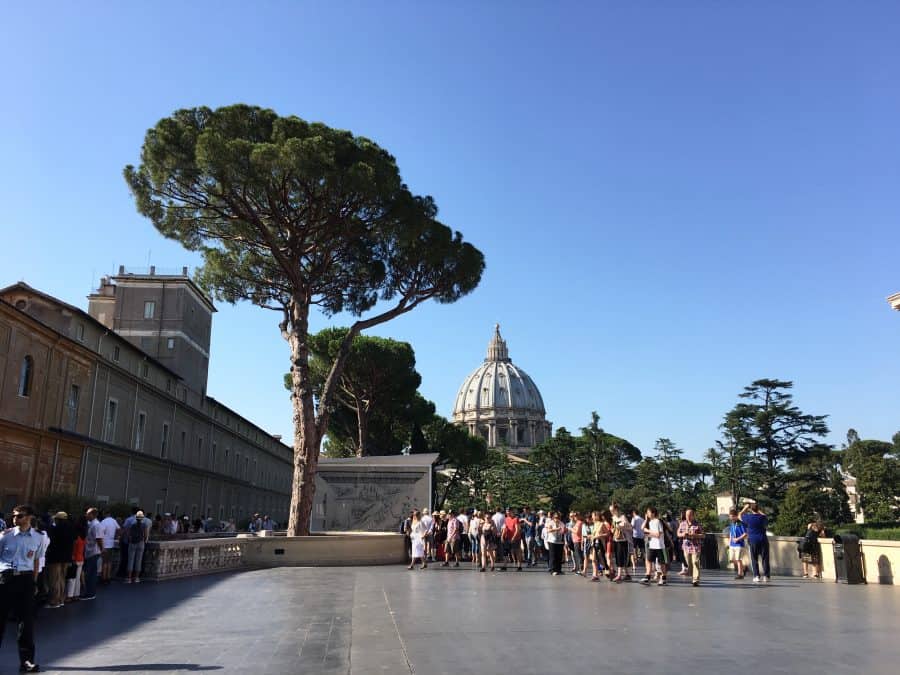 The view from the courtyard

We walked into more rooms, but at this point, the museum was beginning to become very hot and crowded. We went through these rooms fairly quickly and finally made it out of the crowds to our last stop, St. Peter’s Basilica. The walk to the basilica was filled with classic Roman architecture, and Maria made sure to point out special columns and designs to us. Once inside the basilica, Maria talked to us about the history and usage of it. The basilica was consecrated in 326 AD and completed in 349 AD, and it is believed to lie on top of where St. Peter was buried. The church was poorly maintained, and starting from the fifteenth century, plans were made to restore and eventually rebuild the entire church. Today’s St. Peter’s Basilica (also called New St. Peter’s Basilica) is the product of the work of many architects, including the famous Michelangelo. It took over 100 years after Julius II’s initial plan to restore the church for construction to be completed. 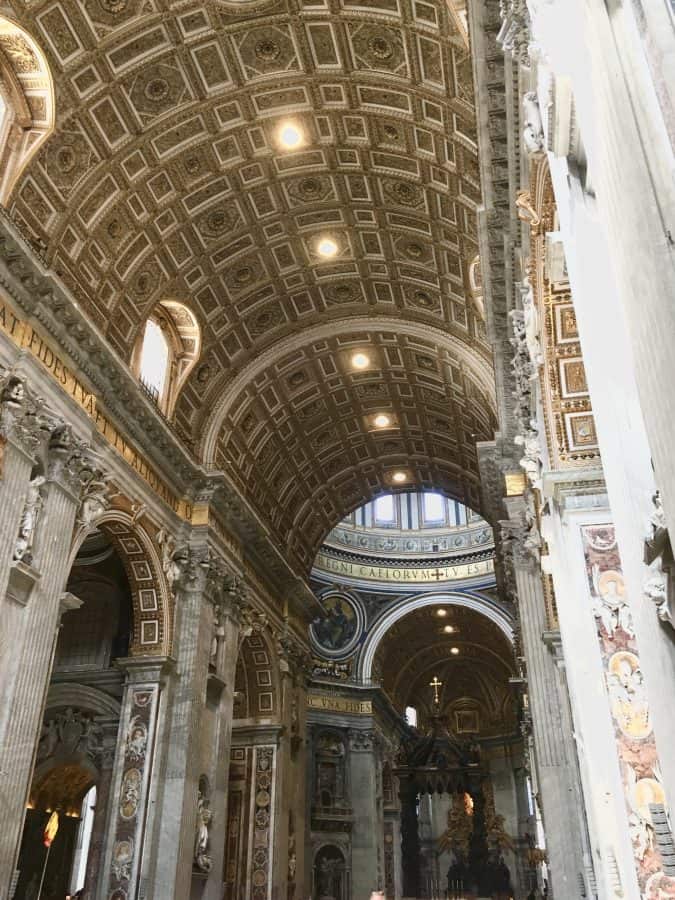 After Maria walked us through the history of St. Peter’s Basilica, the tour officially came to a close. She encouraged us to take our time in the basilica after she left, as well as to take advantage of having already gained access to Vatican City to explore the area further. We gladly complied and walked around outside some more. 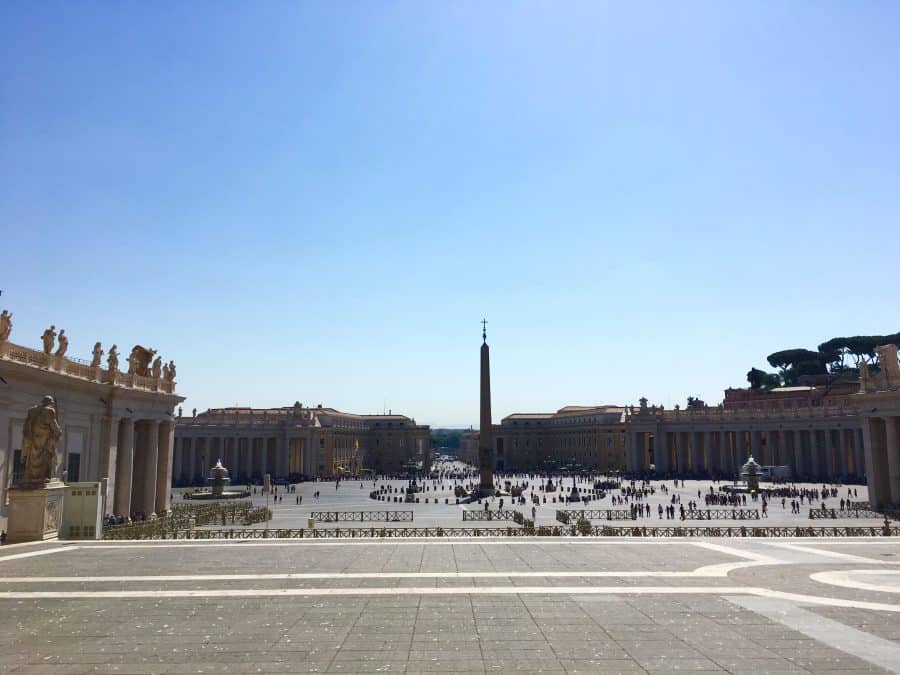 The tour ended on time and took exactly 3.5 hours, which we felt was just enough time to get a feel for everything. On our way out (around 12 PM), we saw the longest lines (that I’d personally ever seen before) of people waiting to buy their tickets to the Vatican. We were beyond thankful that we didn’t have to wait in this gargantuan line because it would’ve taken a few hours at a minimum. We are so glad we decided to see this unique and historically significant country on our trip. We highly recommend that you tour Vatican City as a VIP with The Roman Guy on your next trip to Rome, and we know that our experience definitely would not have been as smooth, enjoyable, or line-less without them.

Looking for other awesome tours in Europe? Then you might want to check out these posts: 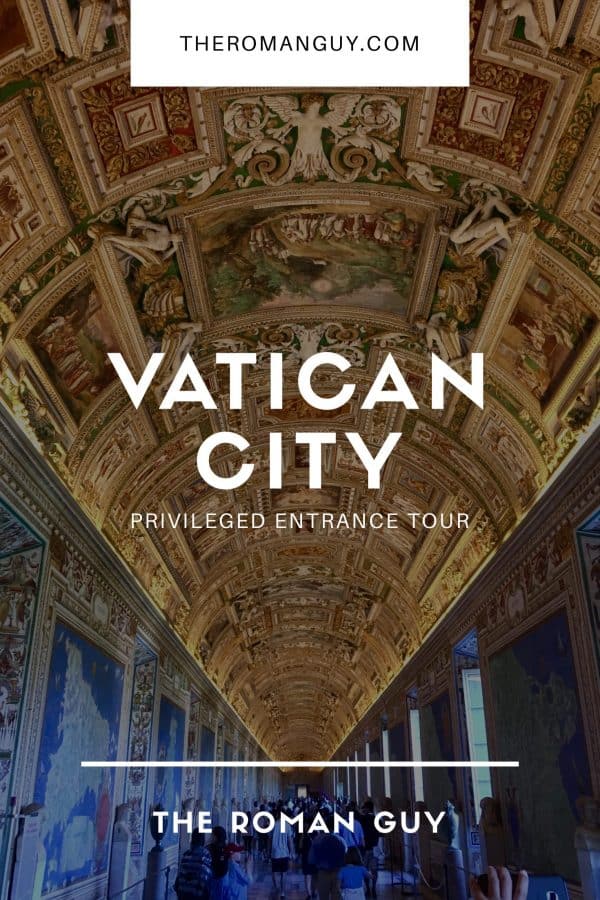 A big thanks to The Roman Guy for making this tour possible for us. As always, all opinions are 100% our own.