Top 5 Things to Do in San Francisco, USA 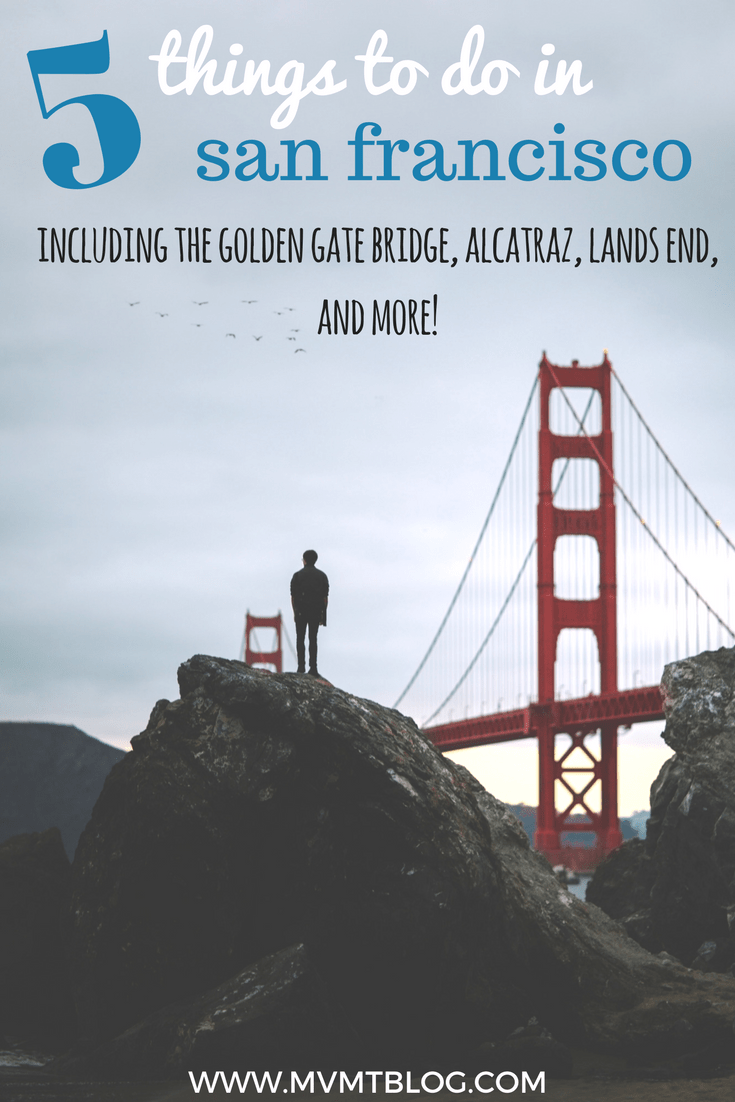 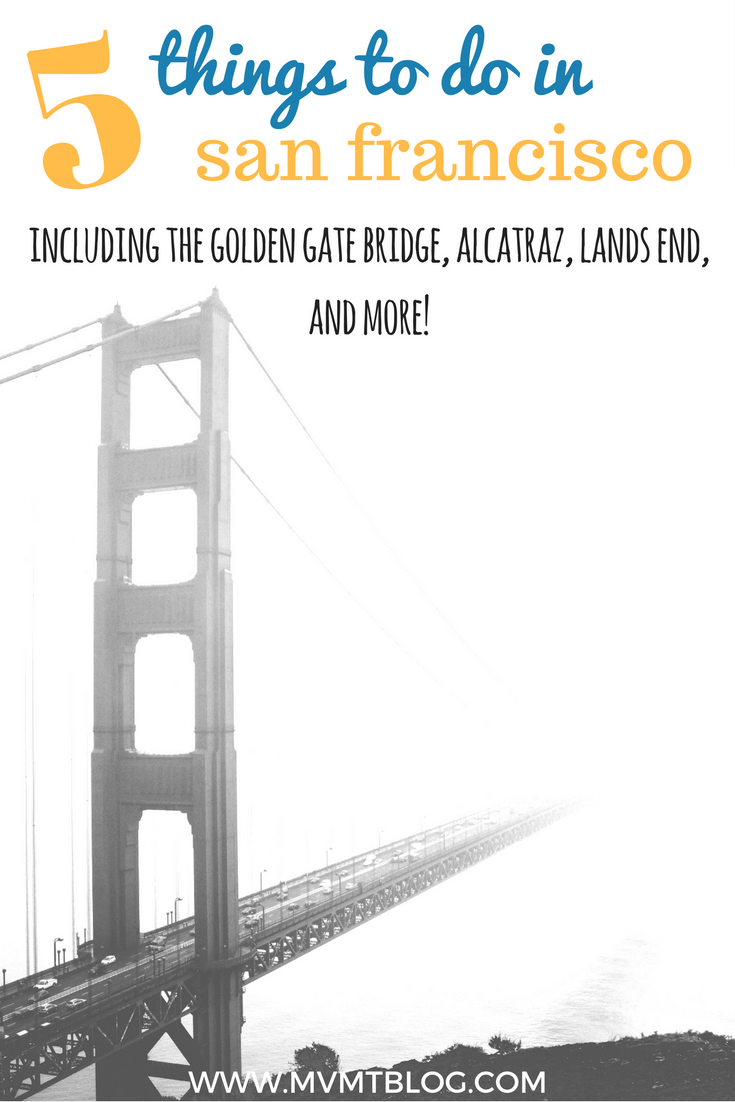 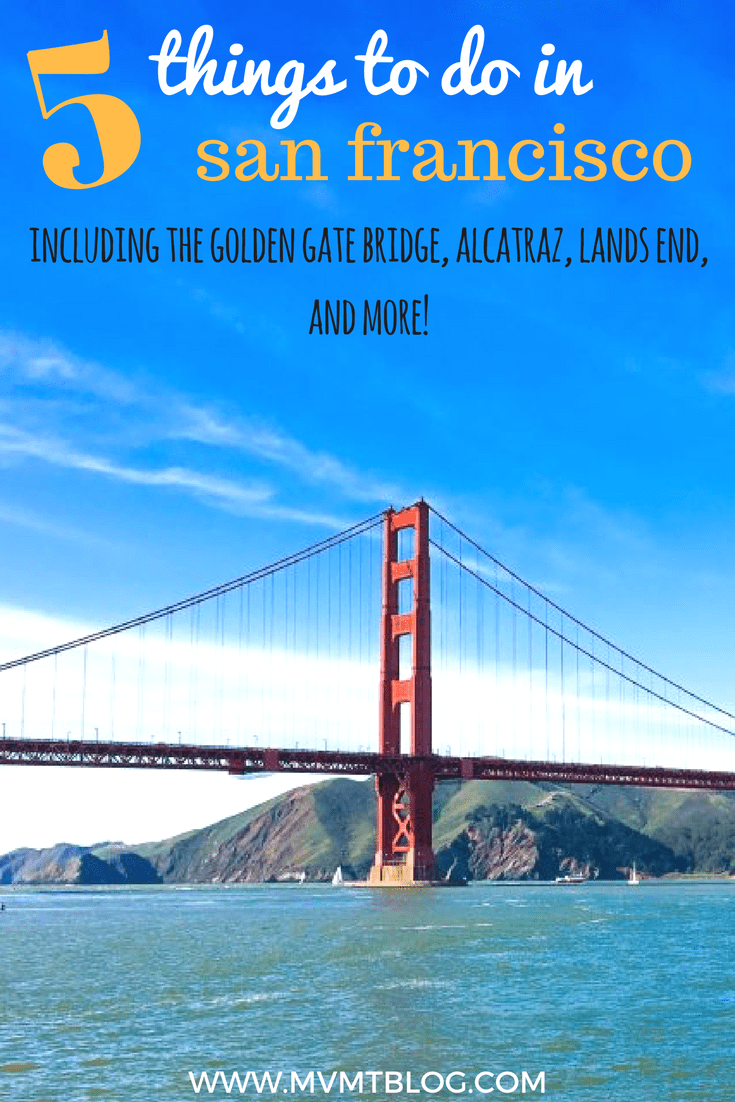 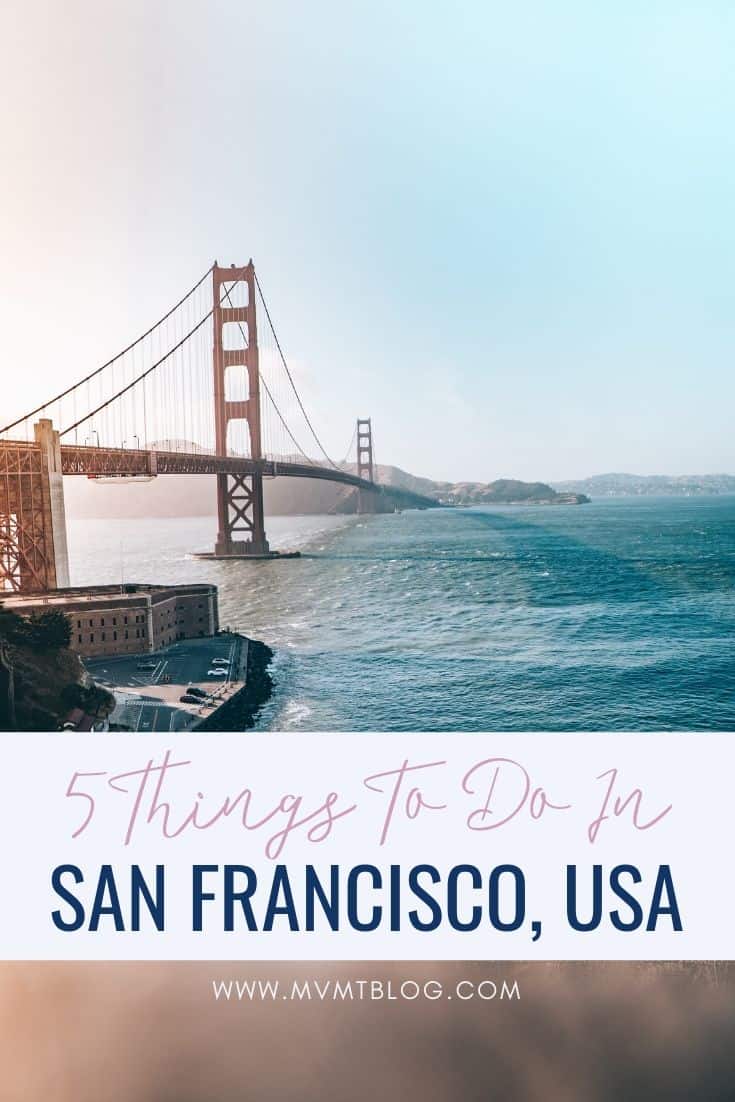 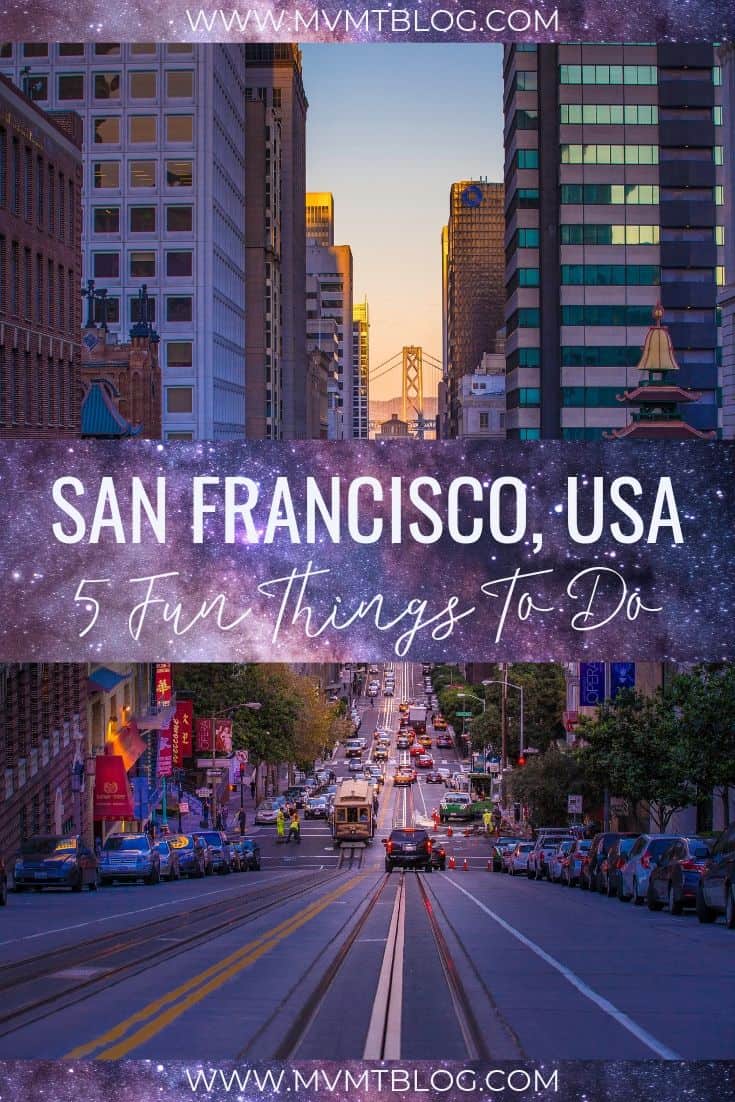 A couple of weekends ago, I had the fortune of arriving in San Francisco on the first day of nice weather the city’s seen since 2017 started. I had visited San Francisco once with my family back when I was in high school, but it’s never the same visiting a city as an adult with adult friends rather than parents. One thing I always note in the back of my mind when I travel to a new city is whether the touristy sights are indeed just that – touristy sights – and nothing more. As much as I hate feeling like I’m succumbing to tourist traps, sometimes certain sights are popular for a reason, as I discovered in San Francisco with Alcatraz and the Golden Gate Bridge. Other popular sites, such as the winding Lombard Street, were overrated in my opinion and not necessarily worth the trip. Here are my top 5 things to do in San Francisco. 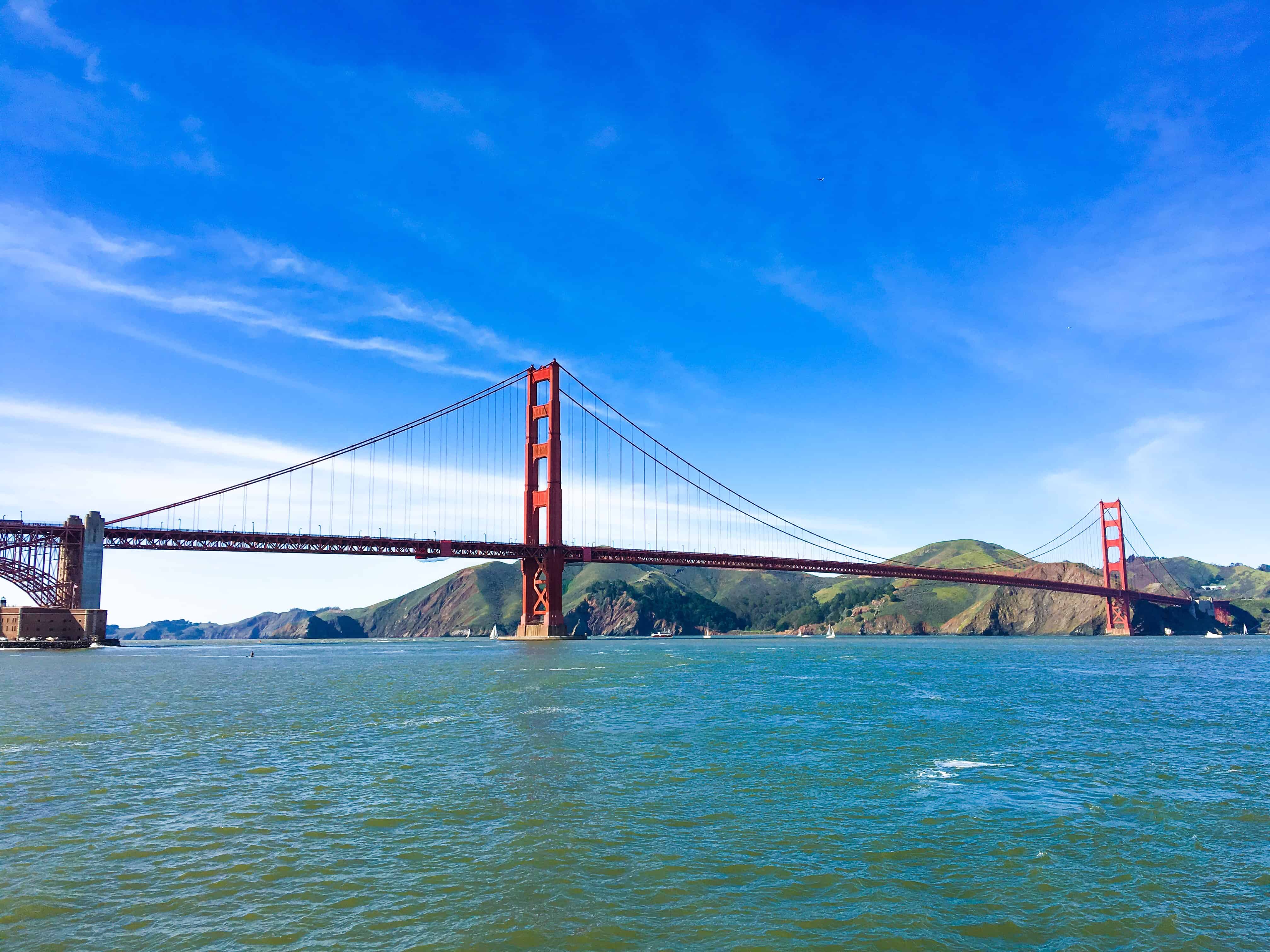 As cliche as it is to talk about how amazing the Golden Gate Bridge is, it really is a sight to behold. We decided to view the bridge from Crissy Field, which I would highly recommend for a great view of the bridge and great photo opportunities. As I mentioned earlier, we were fortunate to have arrived on the first nice day in a long time, so we were able to get a clear view of the bridge. However, I have seen many photos of the bridge slightly covered in fog, and it’s a really neat look as well! If the timing works out for you and it’s a clear day, I would recommend coming here at sunrise or sunset. Just keep in mind that your view of the bridge will frequently be obstructed by fog from late afternoon until morning, so I wouldn’t bank on getting a sunrise or sunset shot on a weekend trip to San Francisco. Other places that offer great views of the bridge are Fort Mason, Fort Point, Baker Beach, and even Alcatraz on a clear day. There are also boat tours offered daily from the wharf that will give you many opportunities to take photos of the bridge. 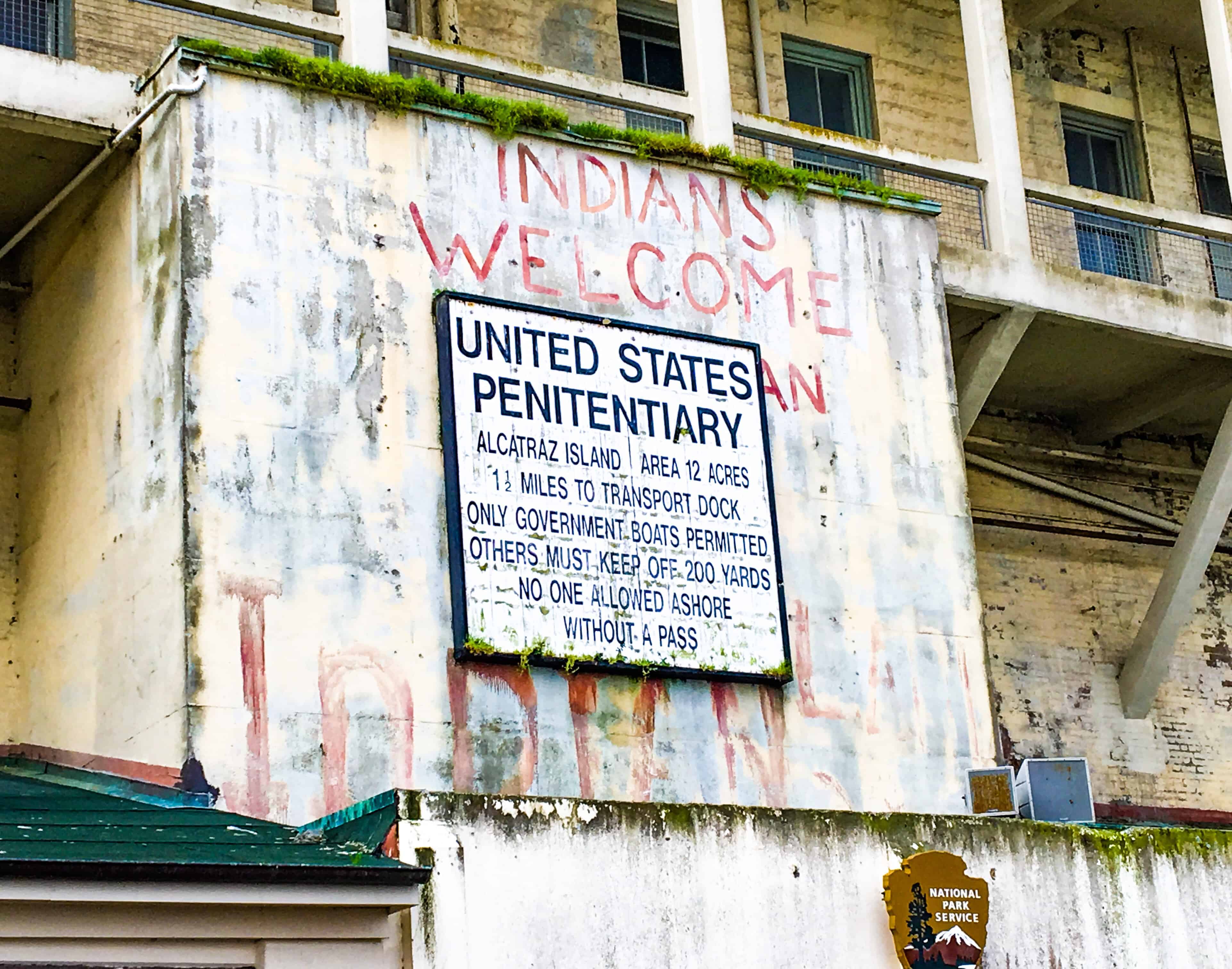 Alcatraz sounded like the biggest tourist trap to me, but it ended up being my favorite experience in San Francisco. For those of you who aren’t familiar with Alcatraz, it is a federal prison that operated between 1933 and 1963 and was designed to house uncooperative prisoners who were causing trouble in other prisons. Some former prisoners you may have heard of before include Al Capone, Robert Franklin Stroud, George “Machine Gun” Kelly, Mickey Cohen, and Alvin “Creepy” Karpis, who served more time at Alcatraz than any other prisoner. During the 30 or so years that the prison was in operation, 36 prisoners made 14 escape attempts, and five are still out there somewhere, missing. Escapes were often deadly, as some prisoners drowned while attempting to swim to San Francisco, and others were shot and killed.

We pre-booked our tour tickets online through Alcatraz Cruises and picked up our tickets at the ticket counter at Pier 33 about 15 minutes prior to departure. We were able to show our tickets on our mobile devices, so there’s no need to print anything. It is advisable to arrive 30 minutes prior to departure, and while we were not permitted to board until close to our boarding time, I would still recommend planning to arrive early to allow yourself time to pick up your tickets from the ticket window and flexibility in case you get lost on your way there.

We took the earliest tour of the day, which departed Pier 33 at 8:45am. The only way to book the 8:45am tour is by pre-booking online; otherwise, the earliest tour available departs at 9:10am. An adult ticket costs $35.50 for a day tour and $42.50 for a night tour. I would say I generally have no interest in putting myself in eerie environments (e.g. haunted houses, or Alcatraz at night), so I was more than happy to pay the cheaper fare and tour the prison during the day. You can view a complete schedule of times and prices here.

The ferry ride to Alcatraz took approximately 15 minutes. Have your cameras ready because the boat ride to Alcatraz offers some spectacular views of the Golden Gate Bridge and of the San Francisco skyline.

Once we arrived on the island, we were briefed by a tour guide and introduced to an ex-prisoner, Bill Baker, who was promoting his book on his time in Alcatraz. While I did not purchase his book that day, I would be curious to read it at some point. I find the history behind the prison, and in particular the many escape attempts, to be fascinating.

After the brief introduction, we were given audio headsets and embarked on a self-guided audio tour of the prison facilities. I thought the audio tour was informative and did a good job of placing the visitor back in the time of each incident that occurred. Afterwards, we walked around the grounds a bit, although part of it was closed off due to construction. In total, we spent about two hours on the island. 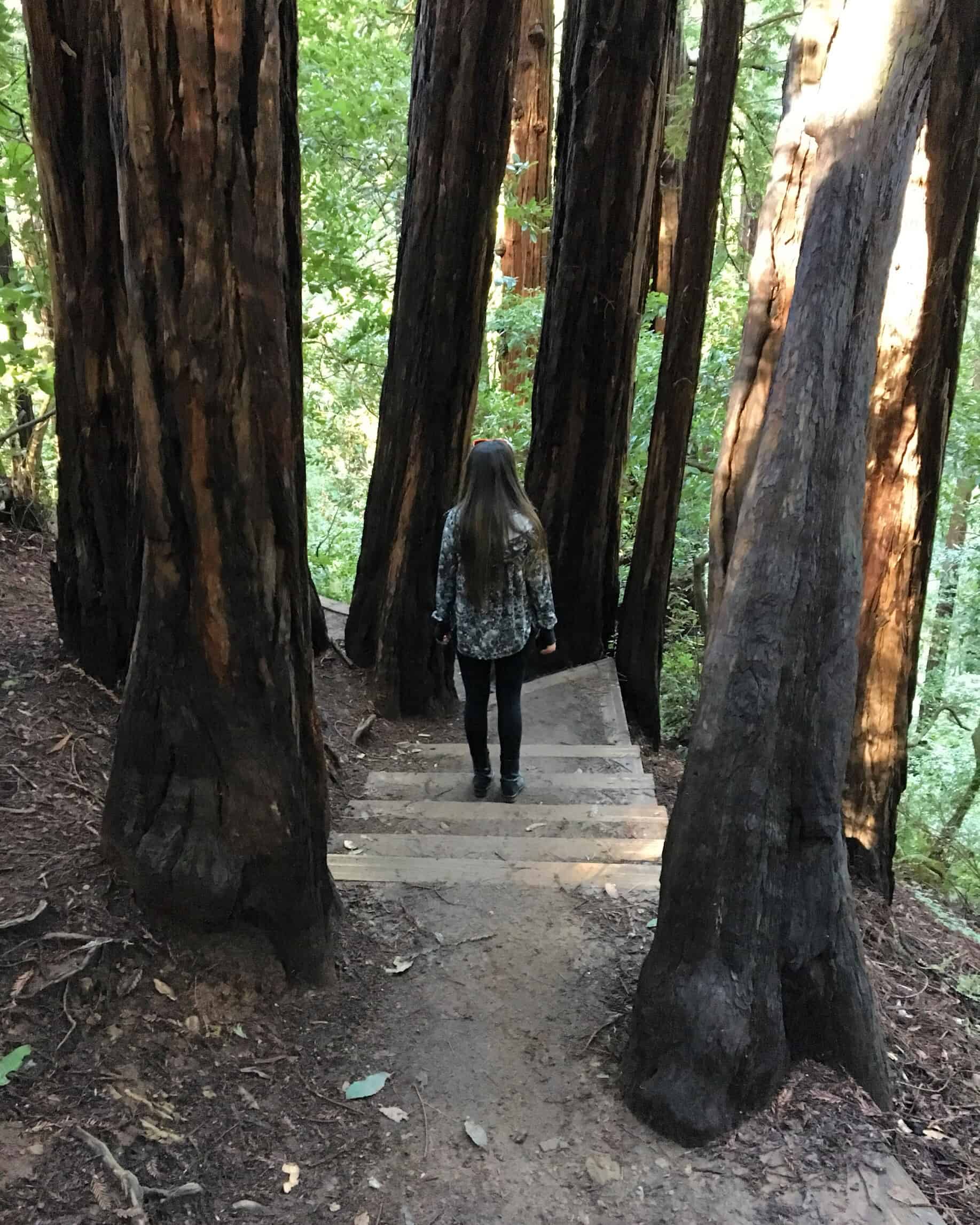 I typically hesitate to recommend any activity that requires a car, partly because it is an added cost that I usually deem unnecessary in a large city with public transportation, and partly because I dislike driving. However, I think a trip to San Francisco would be incomplete without a trip to the redwoods. We rented a car from the city for one day and drove up to Muir Woods, about 16 miles north of our hotel in the financial district. The drive took about 40 minutes, and the latter part of the drive consisted of winding hills that did not even remotely resemble the flat, wide roads that I’m accustomed to drive in the Midwest. I definitely felt like I was holding up traffic a bit, but if I drove any faster, I knew I would be doing it at the expense of my life.

When we arrived at Muir Woods around 9:30am, the parking lots were all full already, so we had to park on the street a distance away from the entrance to the park and walk about 5-10 minutes to the entrance. There is a $10 admissions fee to enter the park, which you’ll pay at the entrance right before you enter.

Since we weren’t planning on staying too long in the park, we thought we would just stay on the main path and hike for an hour or so before turning back. However, we ended up veering off onto the Ocean View Trail after spending just a short time on the main trail. There was a sign that said the trail was closed at the top, so we thought we’d hike up a bit and see what the view is like before the closure and then hike back down. It turned out that the entire trail was open, so we ended up hiking all the way to the end of the Ocean View Trail and hiking back down the Lost Trail and Fern Creek. You can find a full map of the trails at Muir Woods here.

If you have more than just a few hours to spend at Muir Woods, we would recommend renting an RV and taking an RV trip to Muir Woods and the surrounding areas. There are plenty of campgrounds and RV parks in San Francisco, and RVing is one of the best ways to fully take in the beautiful of San Francisco and its surroundings. 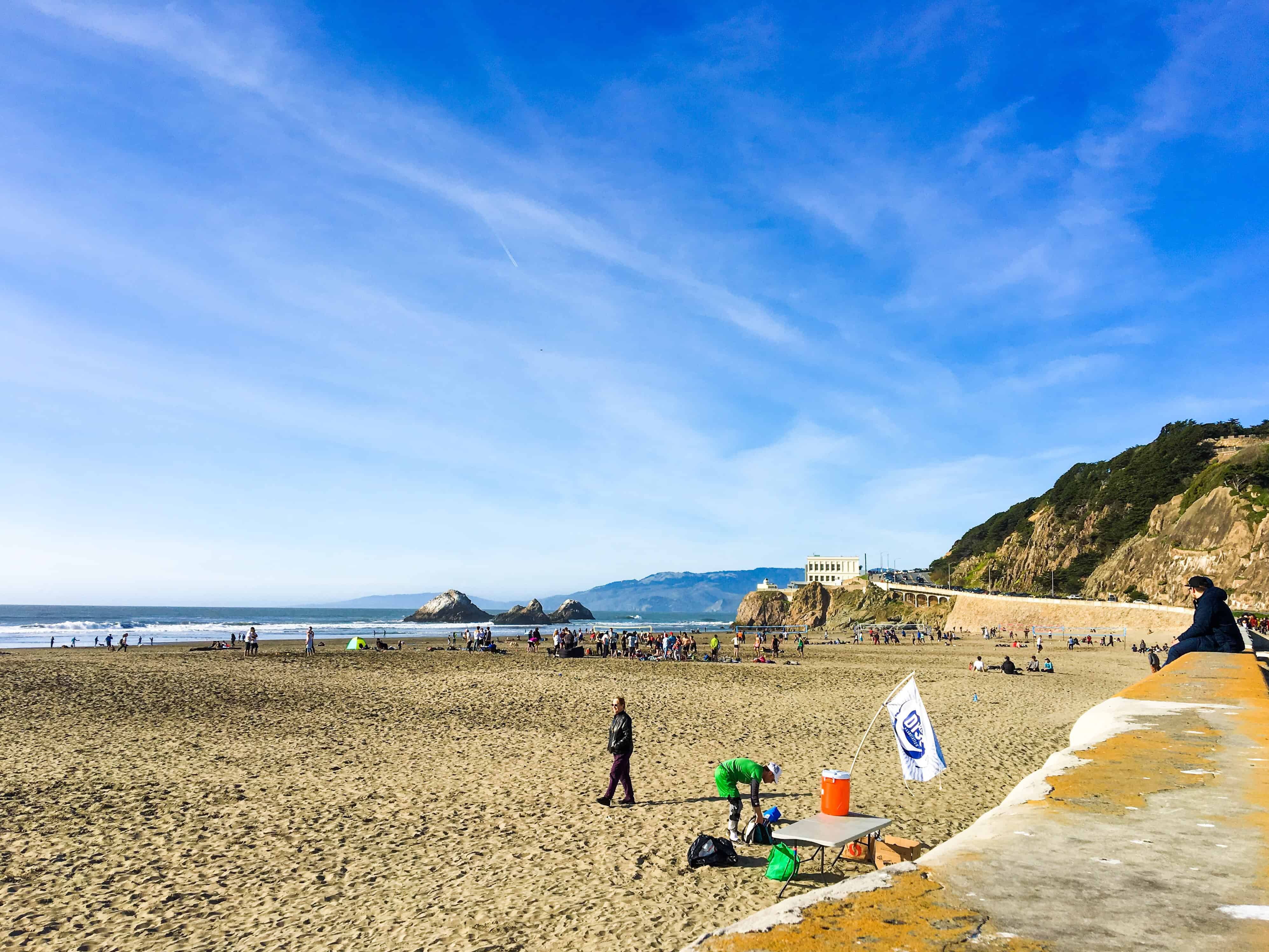 Lands End is a beautiful coastal trail that ends at the beach pictured above. While we did not have the opportunity to hike the trails since we still had our car from driving up to Muir Woods, we thoroughly enjoyed the views driving along the Coastal Trail. The trails looked like mini sand dunes with paths leading through them. The views are absolutely gorgeous as the path runs along the water. In the distance, a beach volleyball tournament was just beginning, and as I sat there, I marveled at how idyllic this city is with its breathtaking views and beach volleyball tournaments in the city in the middle of winter. 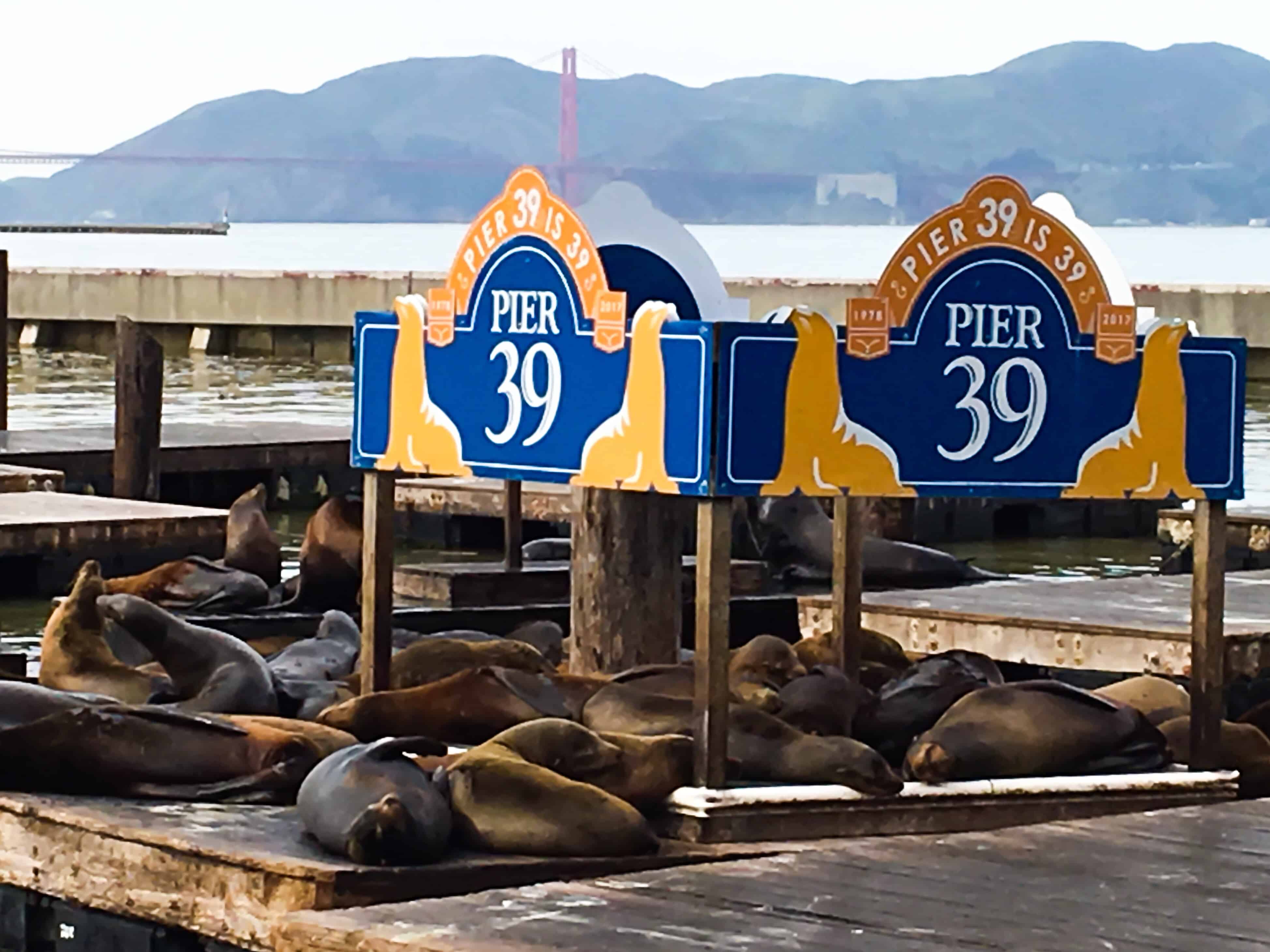 There are several piers running along the north end of San Francisco, but Pier 39 was my favorite because of the crowd of seals lazying around on the deck. If you haven’t observed seals before, you should know that they are quite entertaining to watch. While the majority of the seals were sleeping or choosing not to interact, the ones that did interact with each other were pushing each other off the deck, hopping over each other to get to the other side of the platform, and floating on their backs in the water. I could’ve stayed and watched them all day. 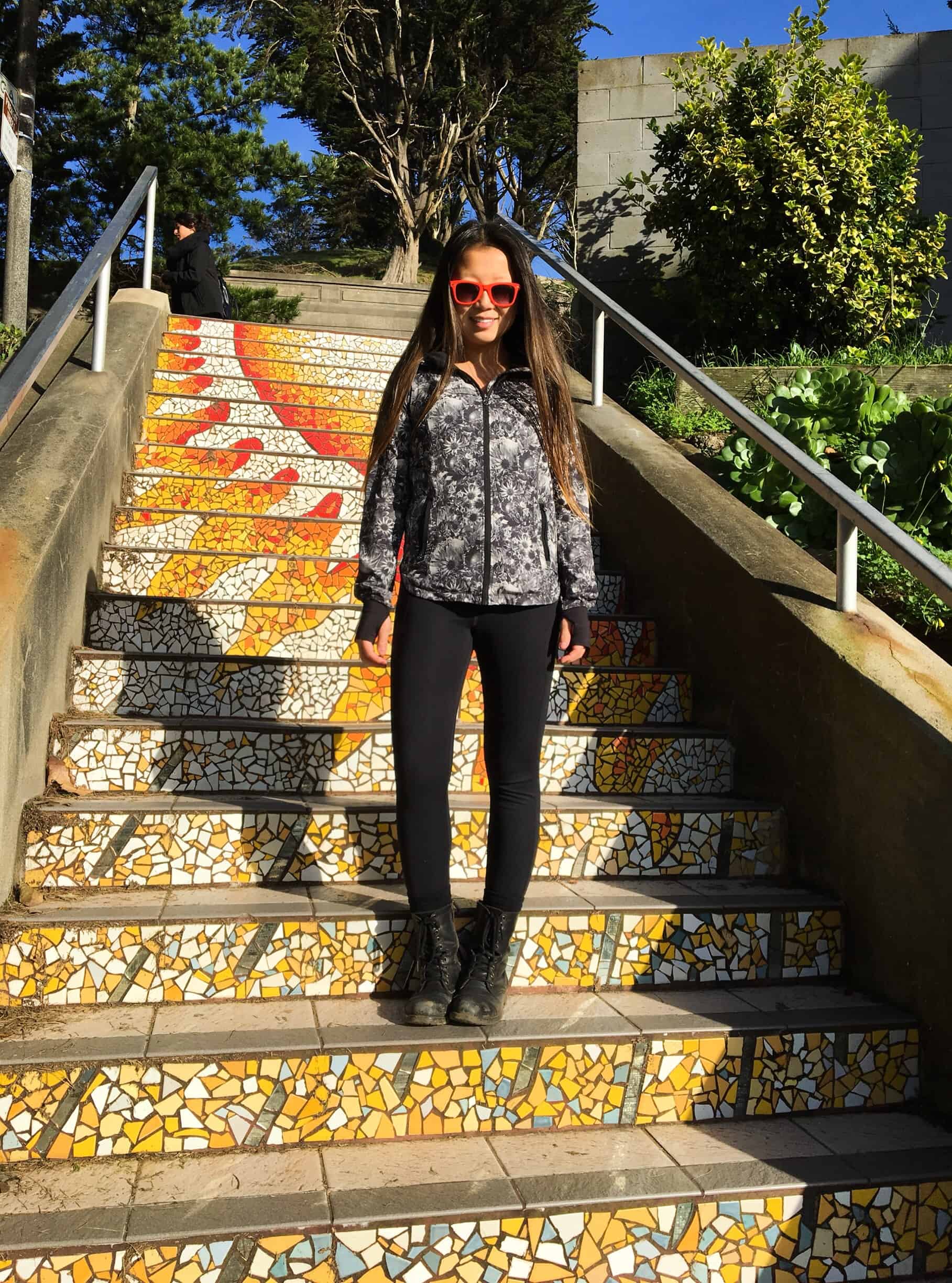 I’m including this as a bonus mainly for those of you who I know go out of your way to visit Instagrammable places in new cities. It’s not so much a “things to do” as a “places to see and take photos.” The 16th Avenue Tiled Steps are a series of steps that have colorful designs, as pictured above. What you see above is only one segment of the stairs, and the entirety of the stairs consist of at least 5-10 of these segments. Each segment has a different color and pattern, which make for many great photo opps. I did have a hard time taking photos here without anyone in them, so I would probably recommend going earlier in the day for the best shot at having the stairs all to yourself.

Looking to explore other big cities in the U.S.? Then you might want find these posts to be useful: 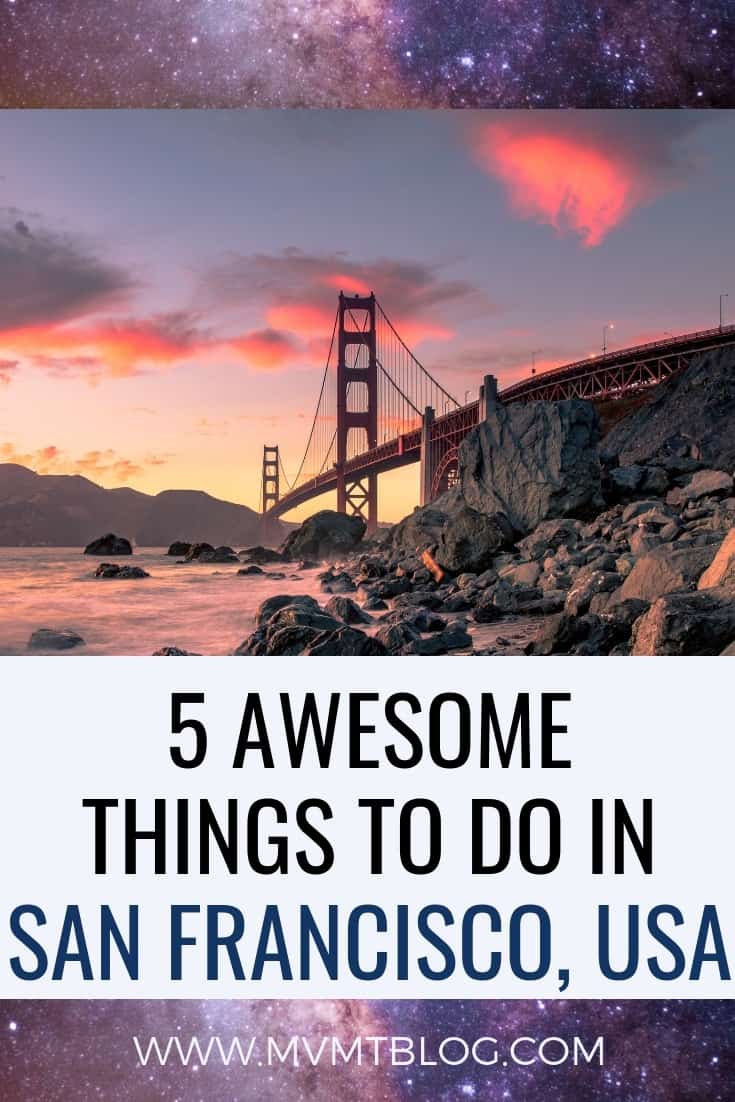 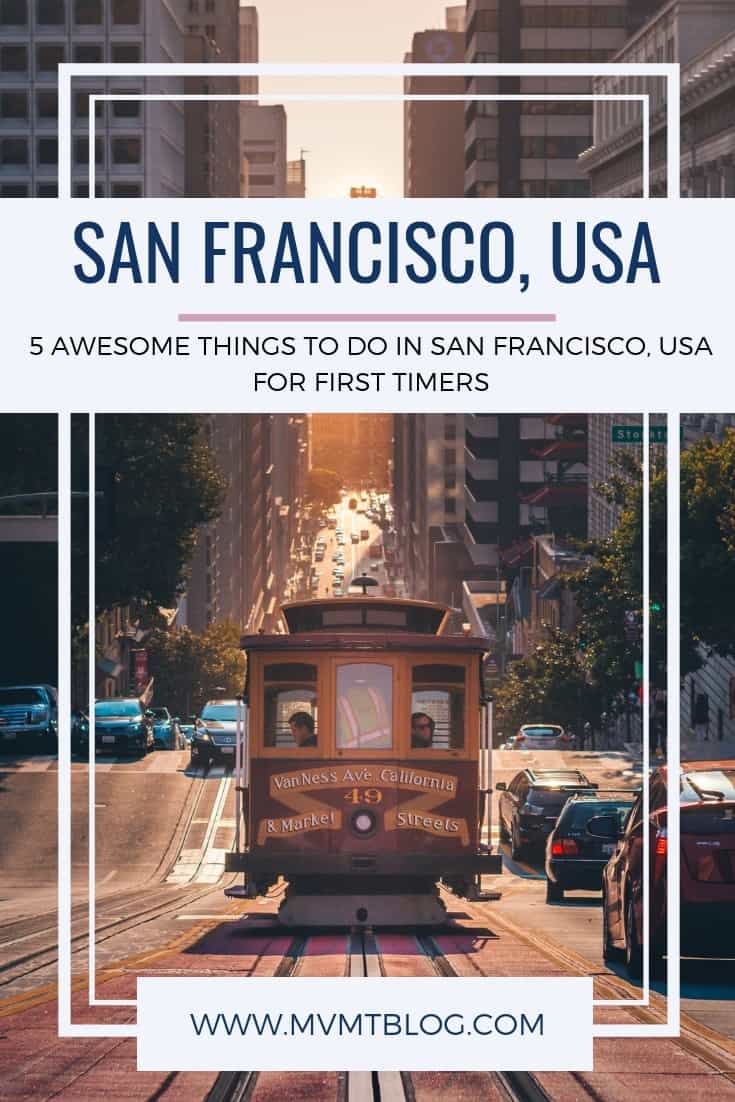 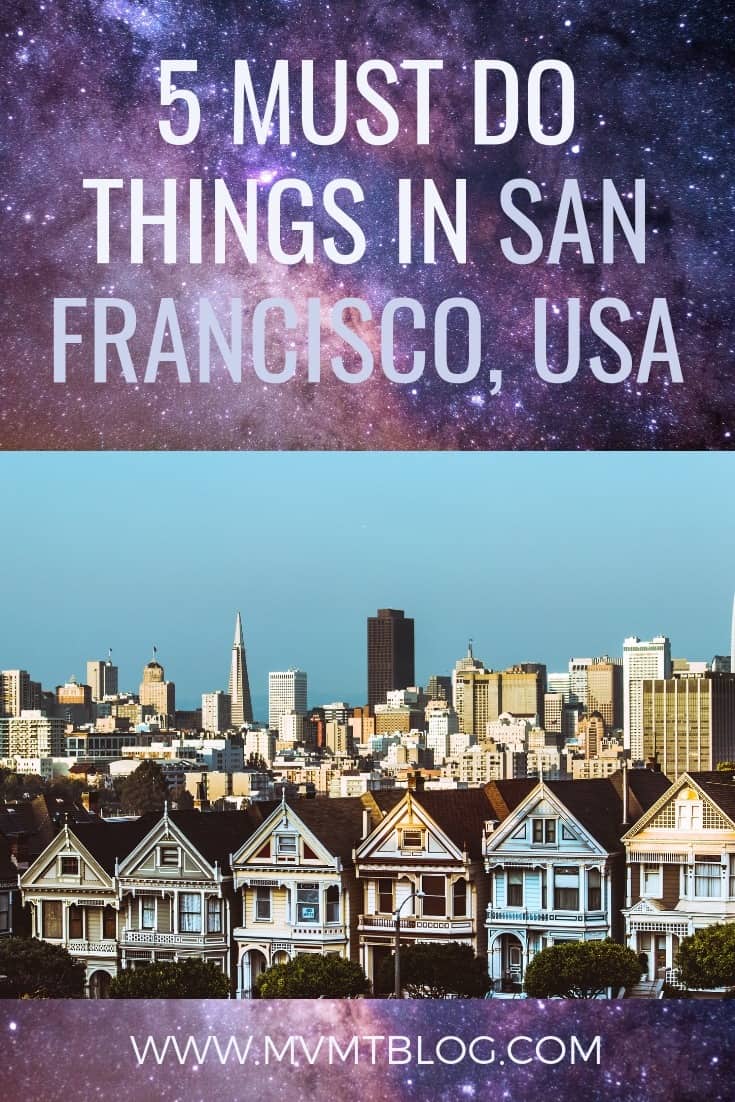