Traipsing Through Turks and Caicos Islands 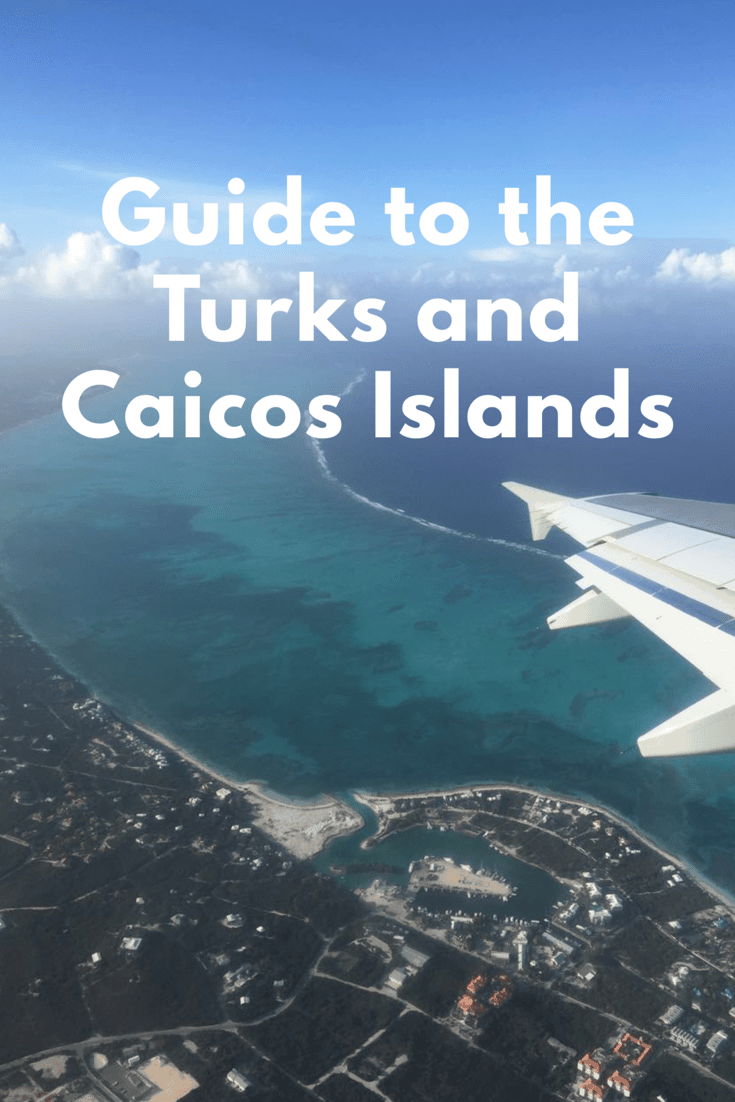 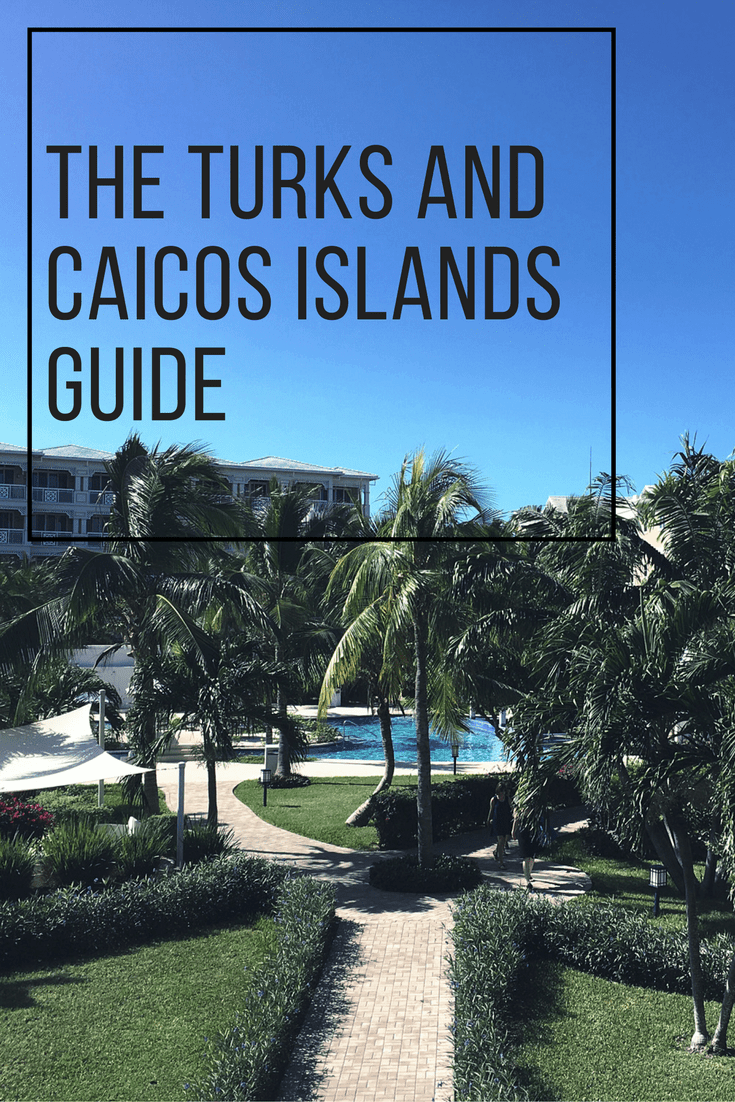 The British territory of Turks and Caicos Islands are made up of the Turks Islands and the Caicos Islands. There are close to 300 islands that comprise the country, but only eight of these are inhabited. Six of these belong to the Caicos Islands, and only two belong to the Turks Islands. On the two inhabited Turks islands, there is a population of only 5,000 people out of approximately 32,000 across all eight islands. Providenciales, which has almost 24,000 inhabitants, is a Turks Island and is the largest in population. It is also the most popular island for tourism, and the majority of visitors will fly into the Providenciales International Airport. Aside from the Providenciales International Airport, there are only five other ones that have paved runways (three others do not). The people in the Turks spoke fluent English so this was not an issue that we had to worry about. They also spoke their own language, Turks and Caicos Islands Creole, which is essentially a combination of language elements from the Bahamas, Haiti, Cuba, and the Dominican Republic. 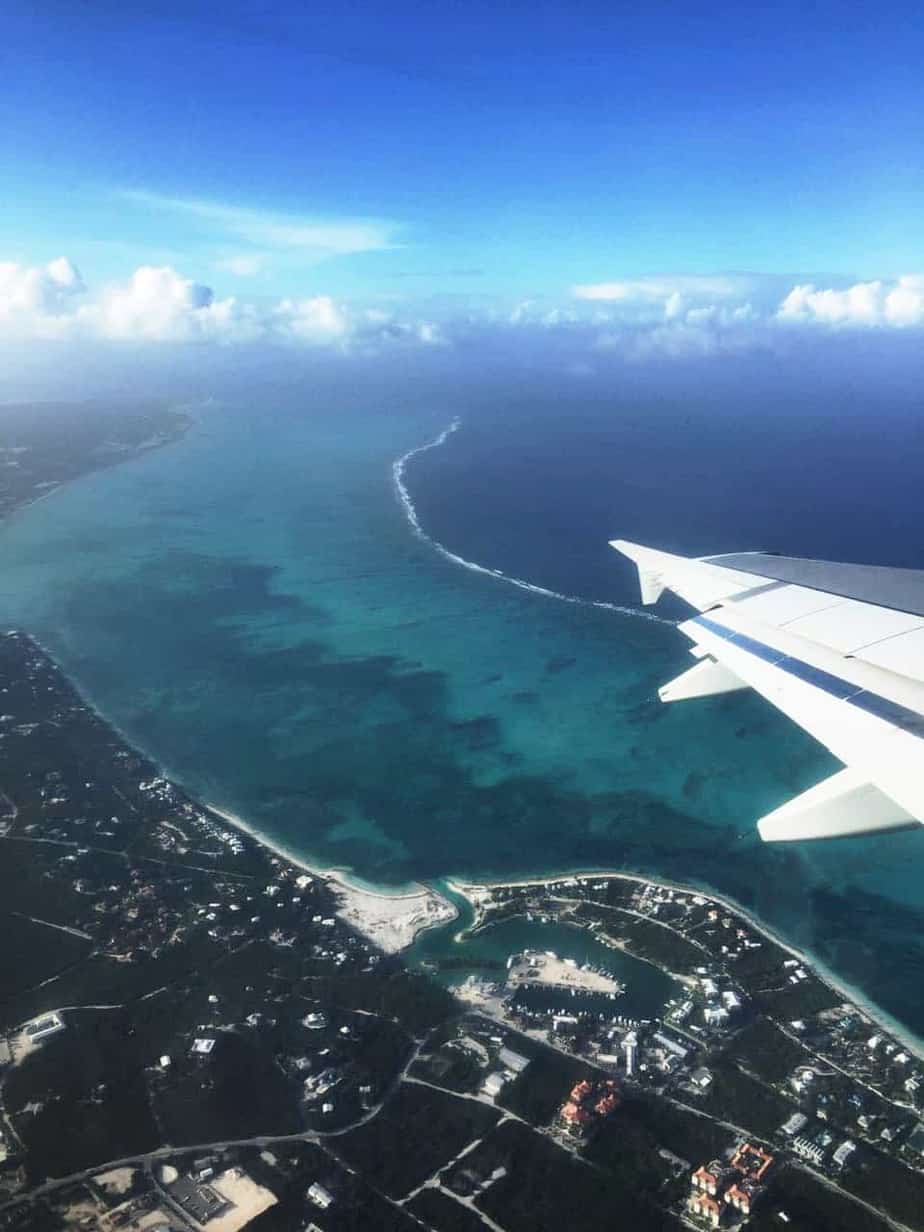 We arrived in TCI around 4 PM on December 22nd. Diana was held up at work so she wasn’t able to arrive until a few days later. A driver from our resort was waiting at the airport to pick us up, saving us the need to rent a car. Once we got in the car and started driving, we realized that in TCI, cars are driven on the left side of the road even though they use standard American cars with the drivers side on the left and passenger side on the right. The islands fell under Spanish, French and British control starting from the 16th century, and they are currently ruled by the British. Though they are under British rule, their systems are mixed, going between American and British systems (as can be seen through the driving example). We spent the majority of our first day there relaxing and, given that we had just come from arctic-like weather conditions, being thankful for the incredible 80+ degree temperature. One of the trademarks of TCI is their unbeatable white sand beaches. The sand is also some of the softest and cleanest that I’ve ever seen, and along with the turquoise waters, the scene really looked like paradise. 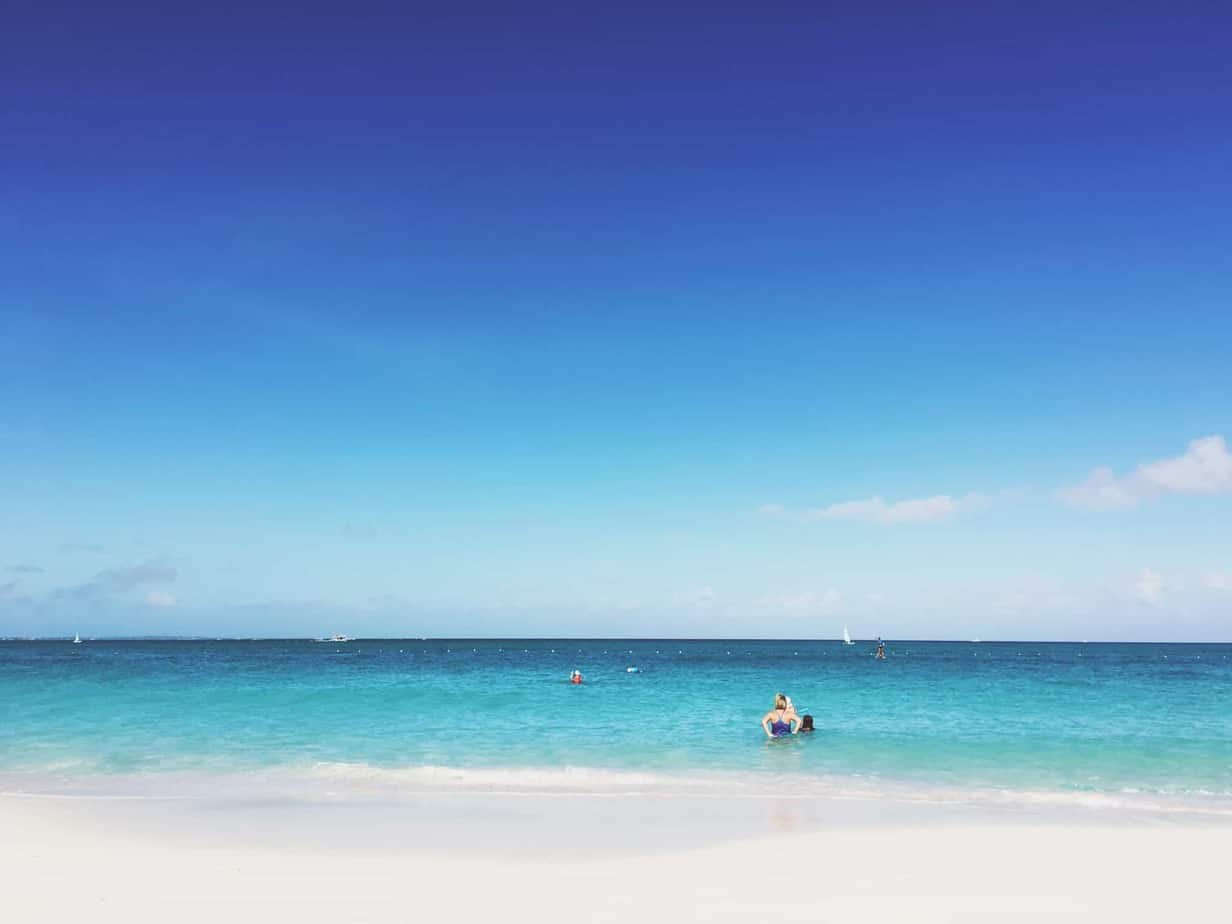 For accommodation, we typically choose to stay in all-inclusive resorts. We felt that it was easiest and more convenient not having to worry about where or when to eat. However, we booked our TCI resort a little last minute and most all-inclusive resorts were either sold out or out of our price range.

We ended up staying at the Alexandra Resort, one of a few non-all-inclusive options on the island. Though we’d previously always opted for all-inclusive resorts, we ended up enjoying our stay at the Alexandra more. They had one or two restaurants on site which were not ridiculously expensive, and we found that paying for each meal discouraged us from spending all our time at the restaurants, giving us more time for other fun activities. 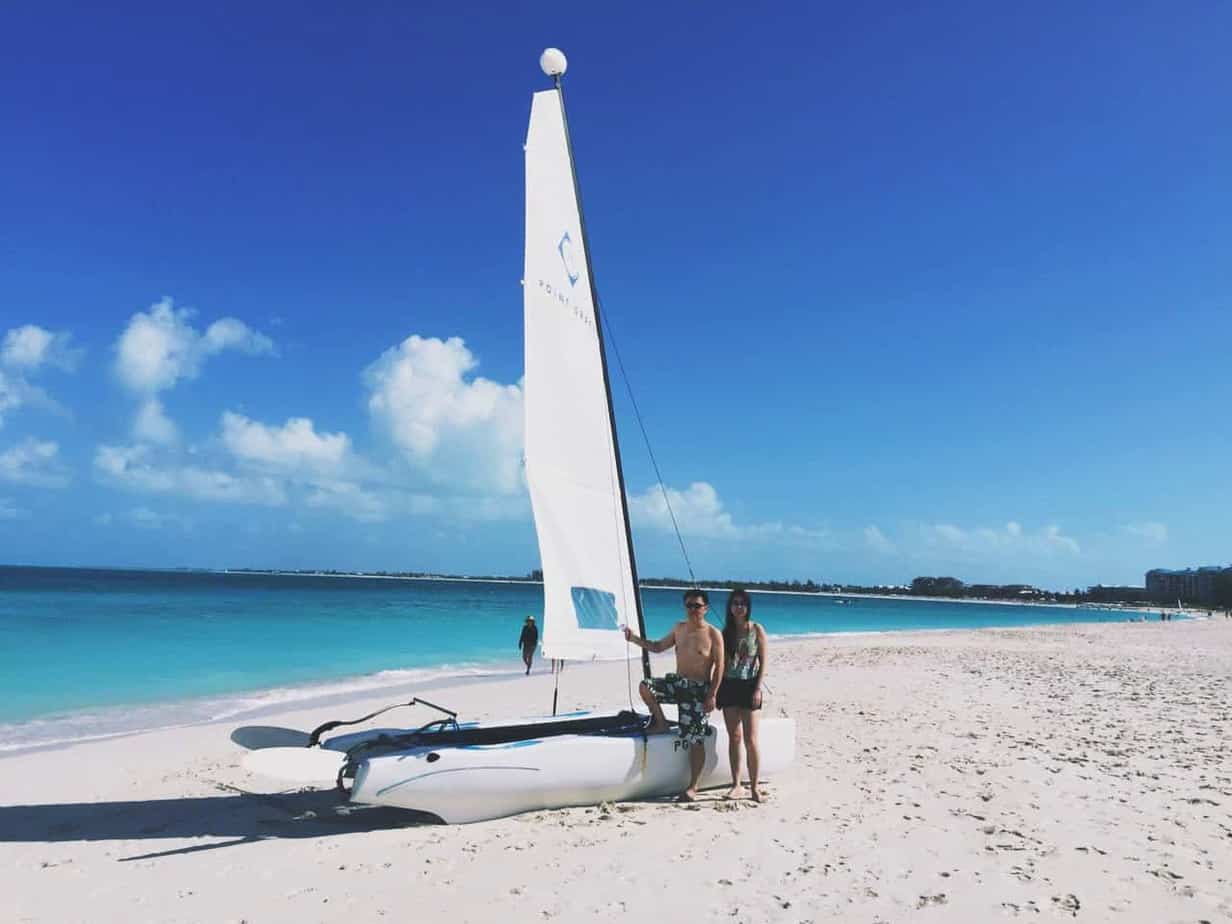 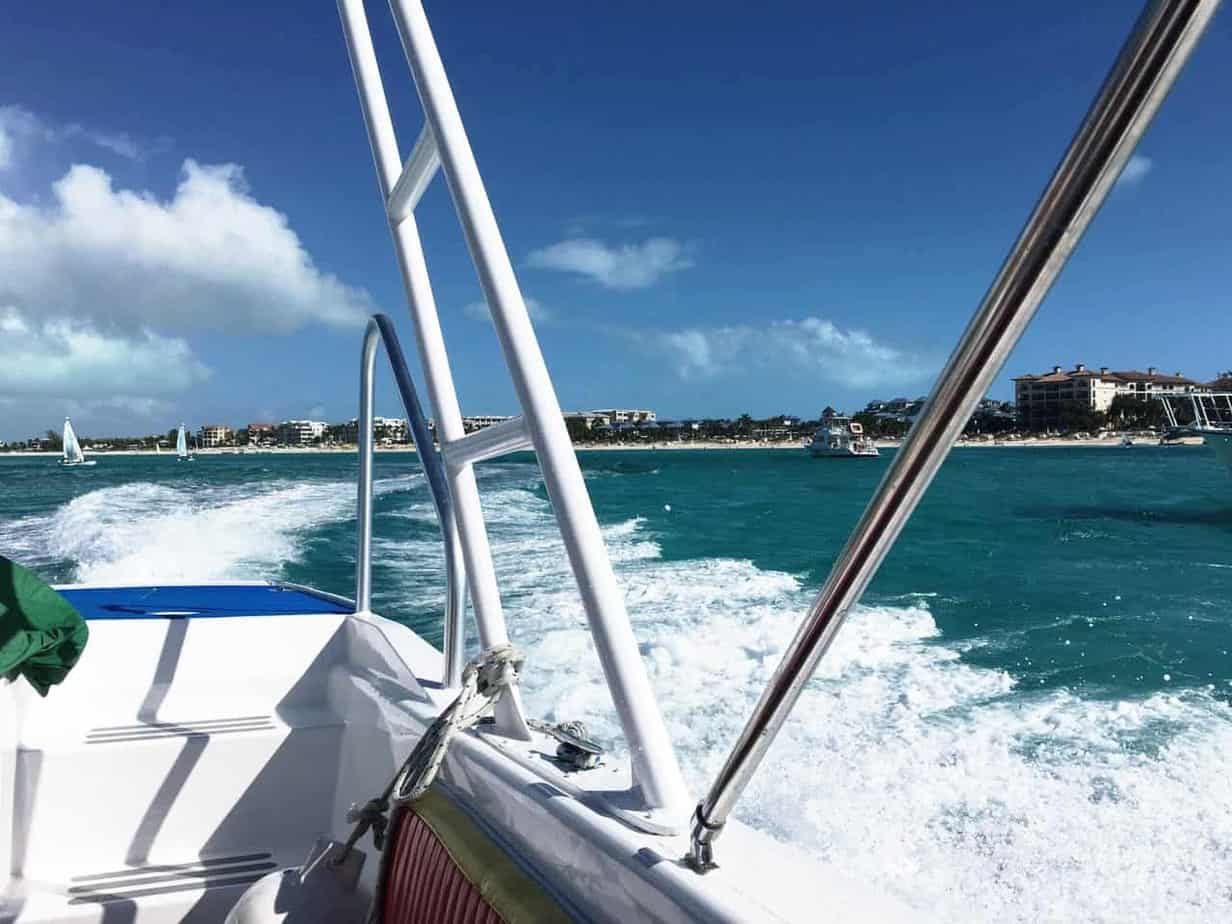 Upon arriving at the resort, we were given complimentary drink tokens which we could use to redeem free, freshly made drinks at the resort bar. They also provided us with complimentary equipment usage for snorkeling, kayaking, paddleboarding, and more. We spent most of the day laying on the beach, soaking up the sunshine, and for me, finishing the fabulous book that I had started on the plane ride there. Once the sun set and evening came, we took out the complimentary bicycles to do a bit of exploring in downtown Providenciales. 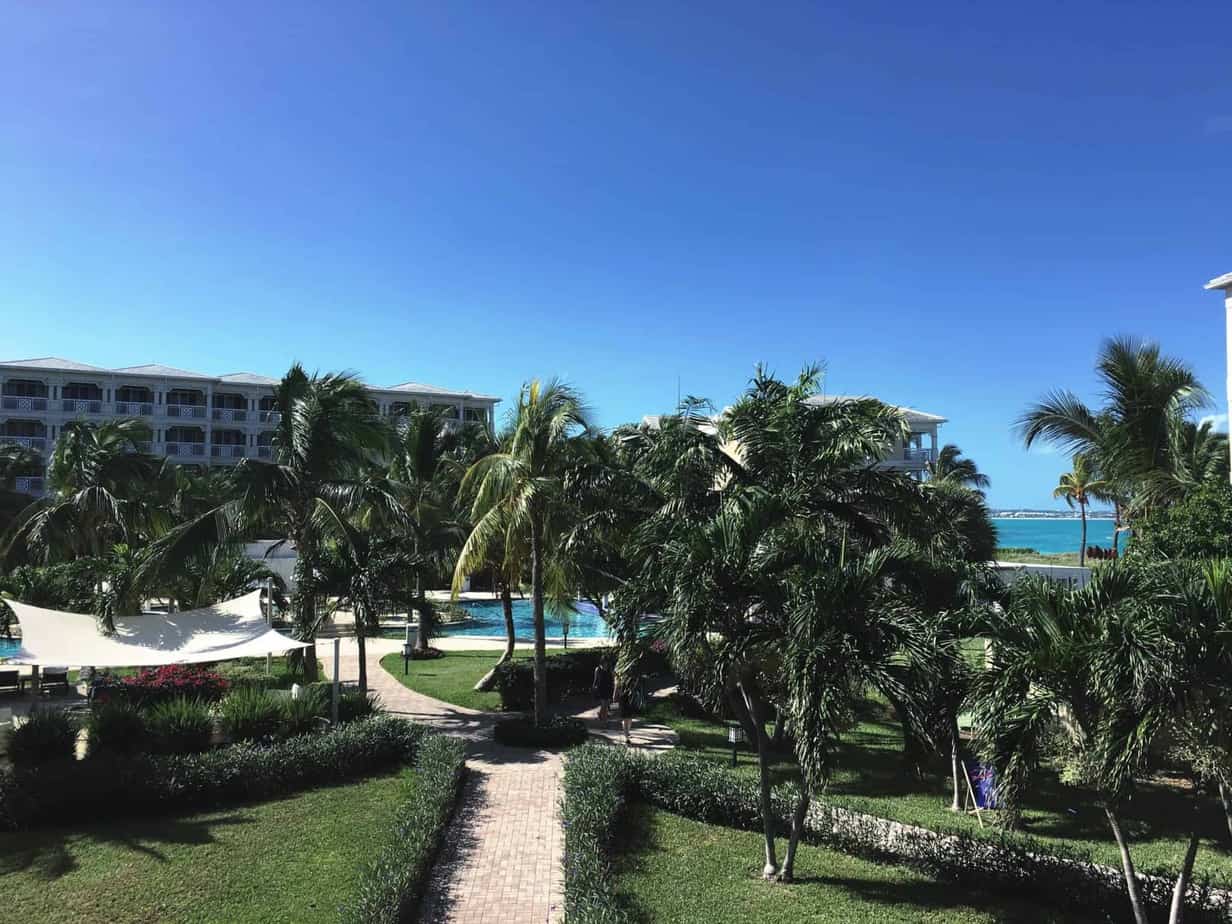 Biking Around the Island

Biking in Providenciales is relatively safe. The only thing to be aware of is that sometimes the sidewalk ends, and the road rules there are different than what you might be used to. For example, there are many roundabouts in Providenciales that took us some time to learn how to navigate on a bicycle. Aside from traffic issues, biking in TCI is extremely safe. Even though we went out as the sun was setting, we never once felt unsafe being out after dark.

We headed out on the bikes and the ride downtown didn’t take more than 15 minutes. Unfortunately, most of the shops had already closed by the time we got downtown, so we rode around for a bit and then headed back. For dinner, we ate at one of the restaurants at Alexandria resort. Another perk about the resort is that they partner with a few other resorts, so if you ever want to try other restaurants, there are shuttles that bring you to the sister resorts’ restaurants. 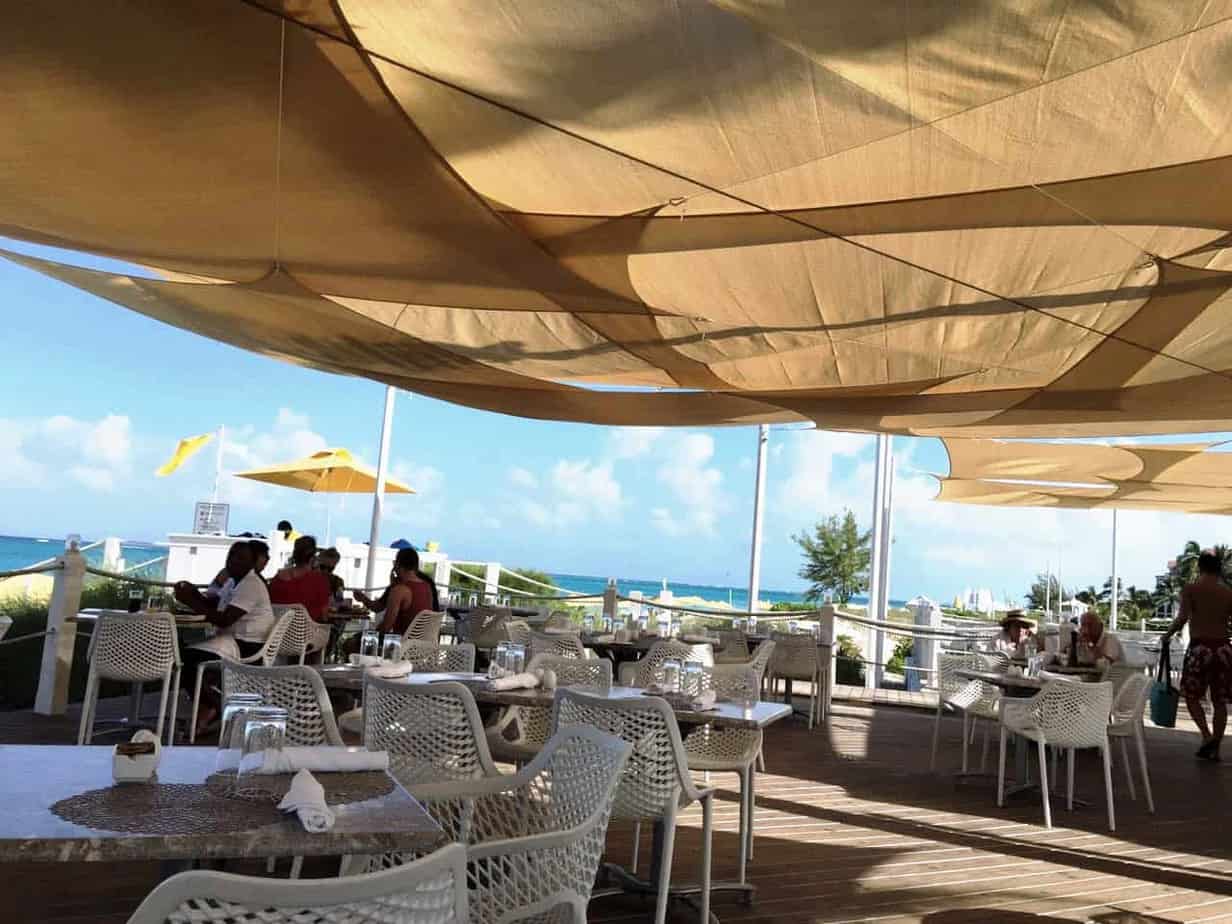 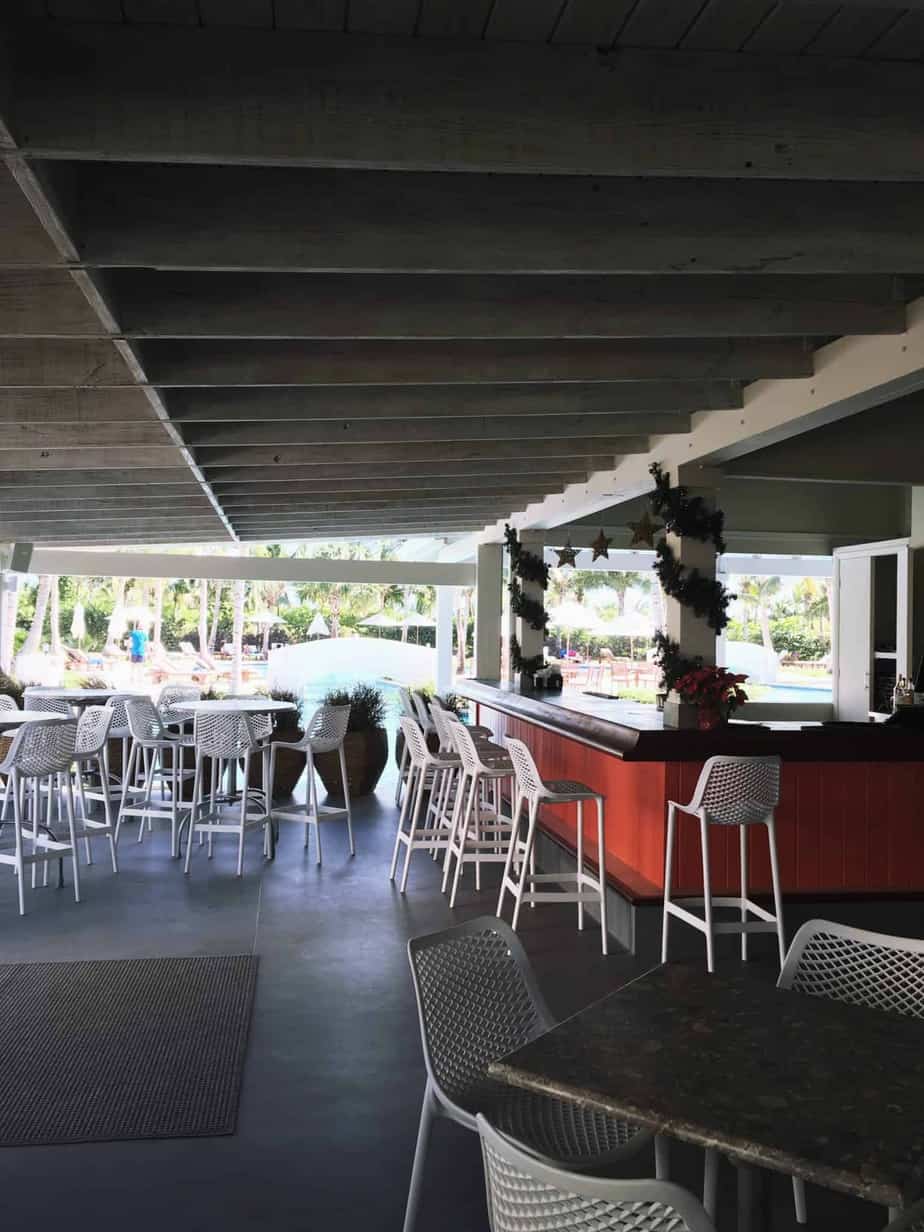 As a side note, we were not aware of this before going, but apparently, TCI receives a large number of Canadian tourists. in 2011, close to 12% of all visitors to the country were Canadian. To show how many visitors this is, the United States had only about two times more visitors and given the population differences between the two countries, this is a significant number. I was later told by locals that TCI has been considering joining Canada for a very long time, which could explain the high amount of tourism that occurs there. Upon doing more research, I found that the most recent conversation had by the two countries was the TCI premier and a Canadian Member of Parliament in 2014. There, they discussed whether TCI should join Canada as an 11th province, even though the premier had rejected the idea only one year prior. 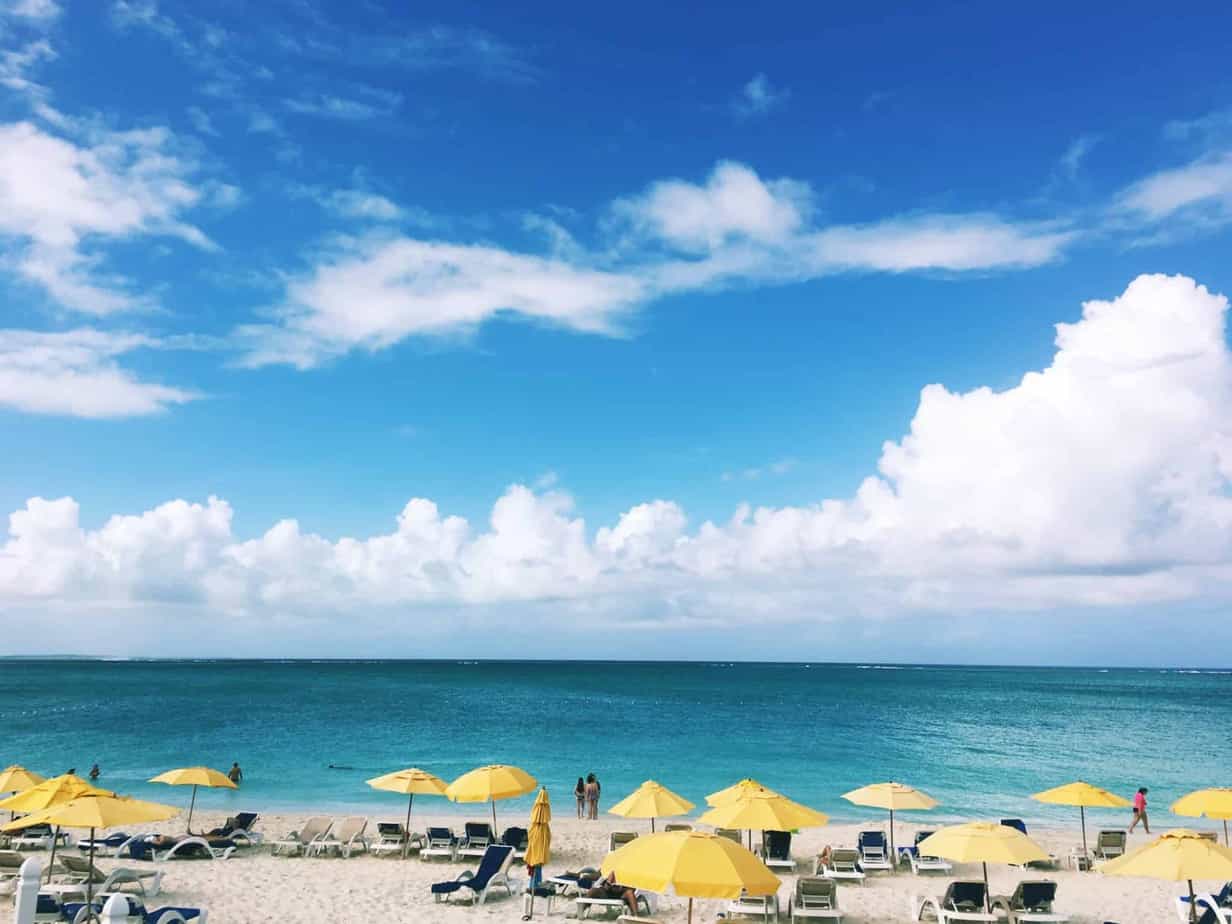 The next day, we decided to go downtown on the bikes again. This time, we went earlier in the day and were able to see more of the city. The streets are very typical of any tropical location, and the shops were mainly for souvenirs. Keep in mind though that most of these shops were quite pricey! Because we didn’t have an all-inclusive package, we also felt better getting dinner downtown because either way, we would’ve had to pay for our food. This way, we were able to have more flexibility in trying local foods. 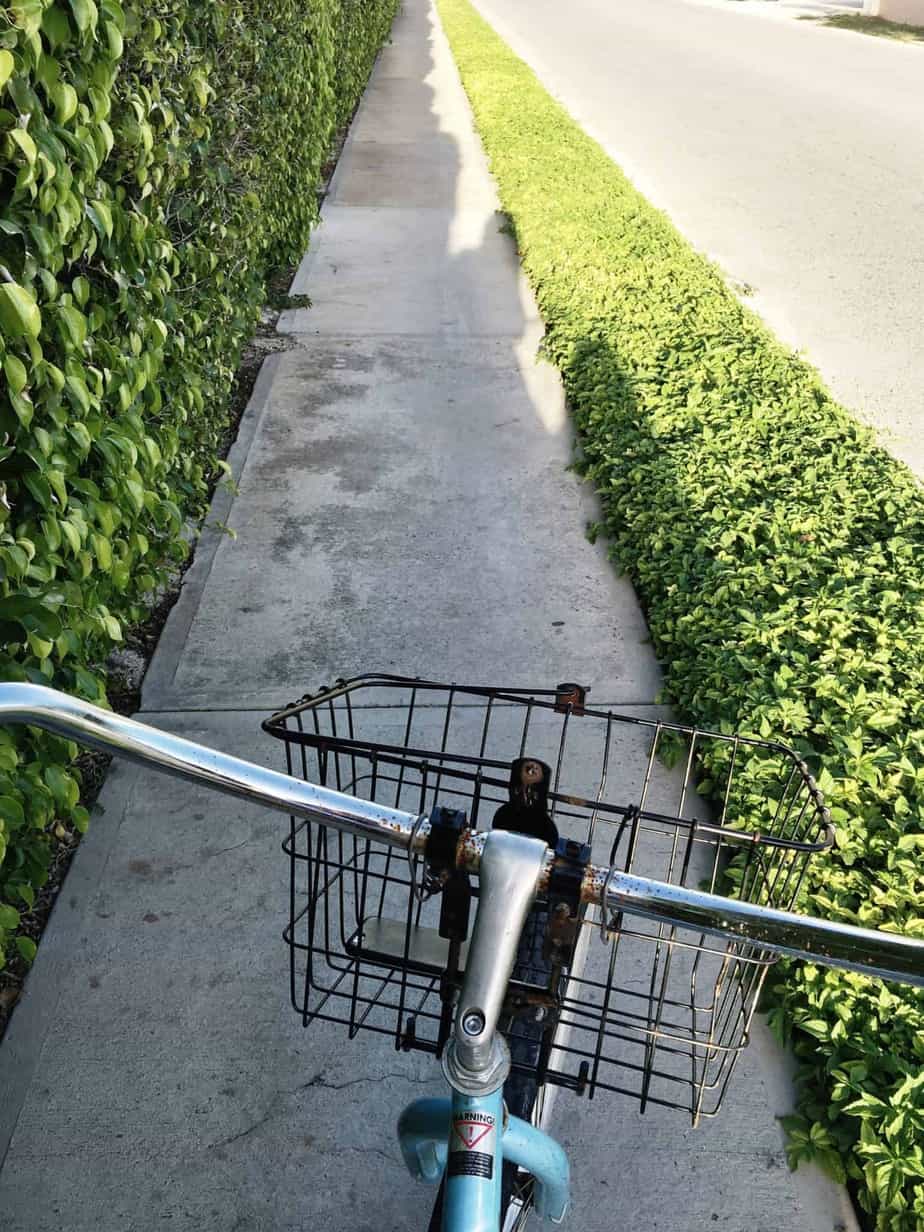 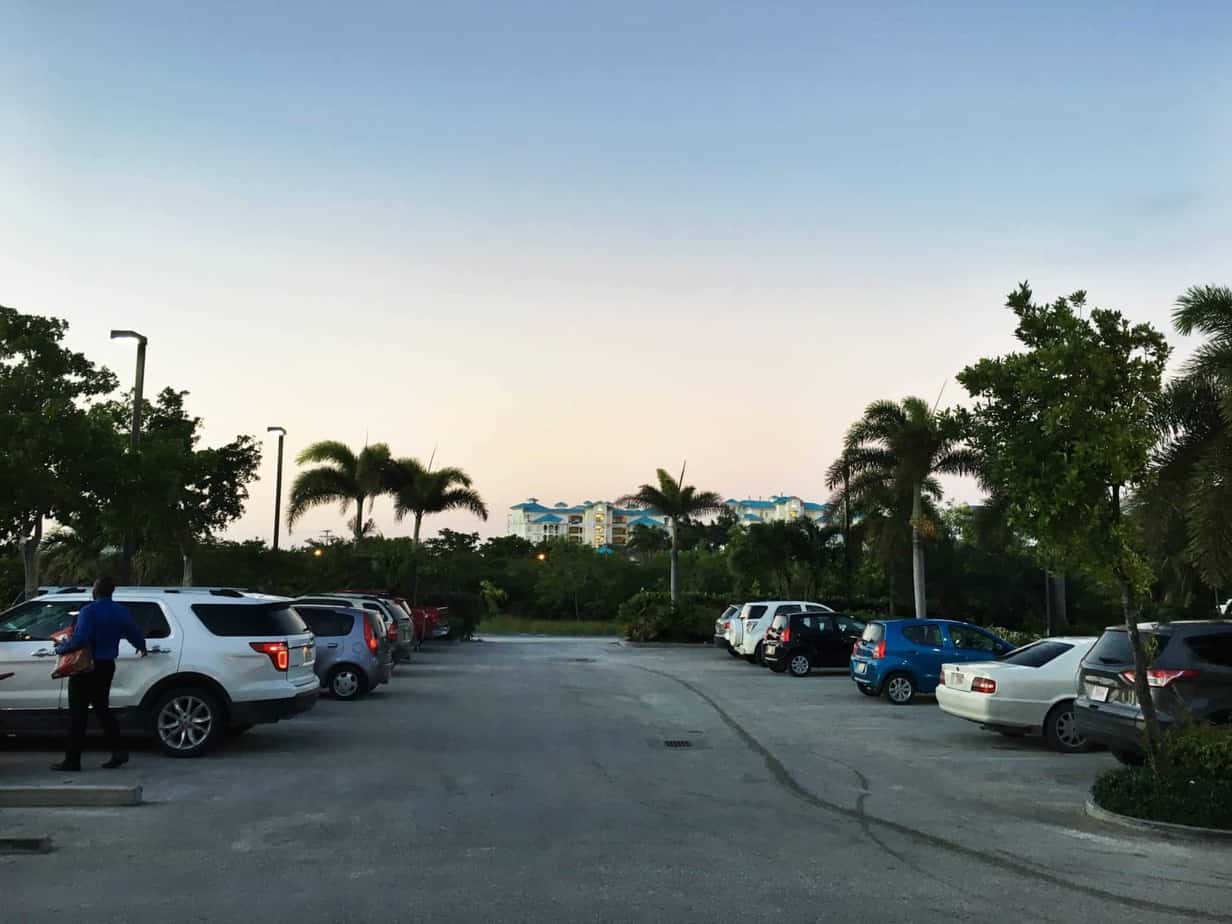 My sister finally arrived on our third day at TCI around noontime. After she got settled in, we went to the beach and walked down Grace Bay. It was much longer than we’d expected and it didn’t appear to be ending anytime soon, so after almost 30 minutes of walking, we turned back.

That night, we attended the weekly Thursday Night Fishfry. Our resort offered a convenient shuttle to the fish fry which we used to get there and back. The fish fry is built in a parking lot near the beach. There was a live band playing the entire time we were there, and at times, there was an emcee dancing on the stage and getting everyone excited by calling out their country names. At the fish fry, there was a huge variety of foods to choose from. The vendors were all local people who cooked authentic local cuisines, allowing us to get a taste of real TCI cuisine. There were also various souvenir stands with local crafts and collectibles. 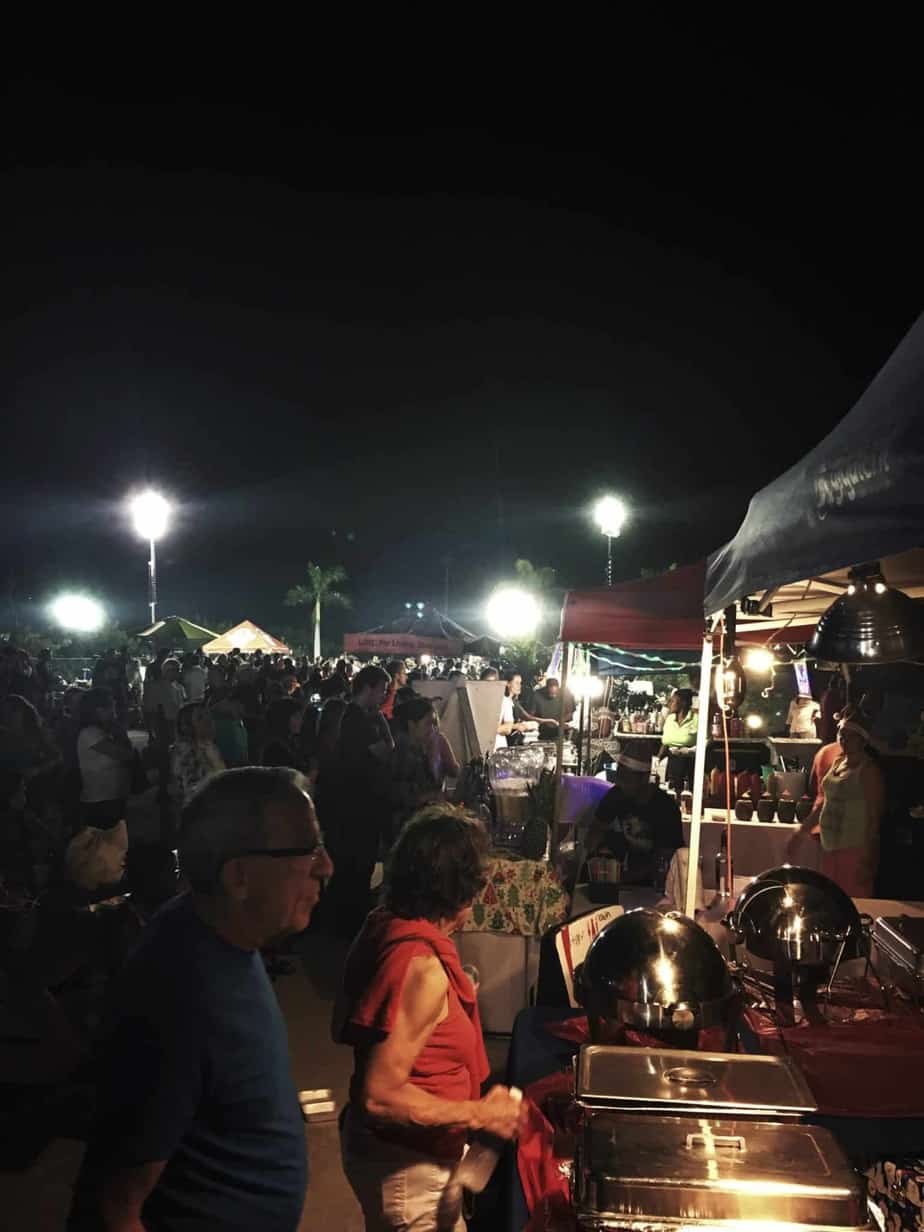 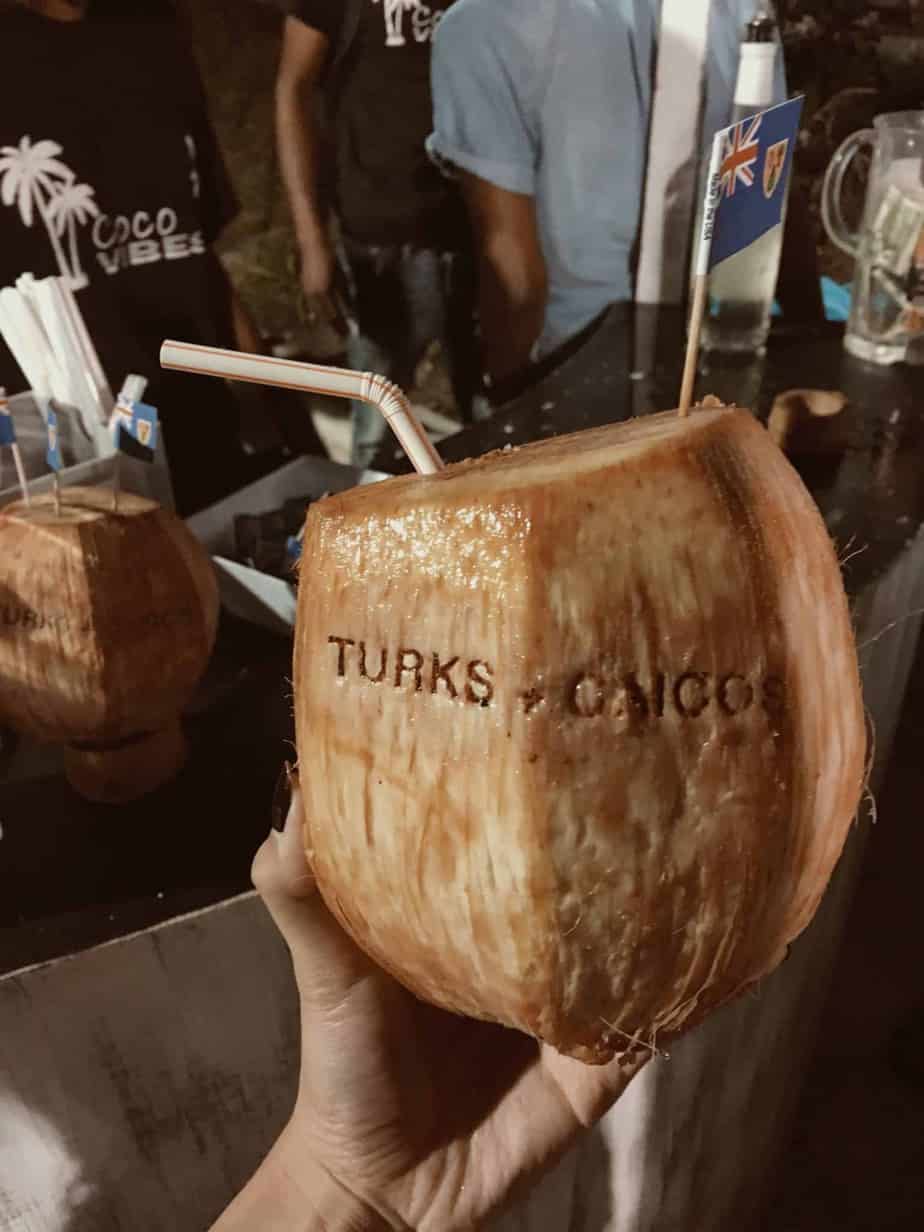 On our final full day in TCI, we went parasailing! There were tons of companies with booths set up on the beach for activities such as parasailing, scuba diving, etc. We walked to one of the companies and within minutes, were on the boat and ready to go. The workers were all extremely friendly and embodied the island vibe perfectly. We asked them to snap a few pictures of us in the air which they were more than willing to do, and when I looked at my phone afterward, I had close to 100 new pictures (what more can a girl ask for in a photographer??). The actual parasailing ride was much more exciting than we had expected! We had previously parasailed in Mexico and experienced a very calm ride. It was relaxing to be able to look down at the views, but it would’ve been more fun if there had been a little more of a thrill factor. We definitely got that in our TCI parasail trip. The winds were especially strong that day, and the entire time we were either flying side to side or front to back. Halfway into our parasailing trip, the boat driver dipped us into the water, which was a laugh for everyone as we jokingly pretended to try escaping the water. 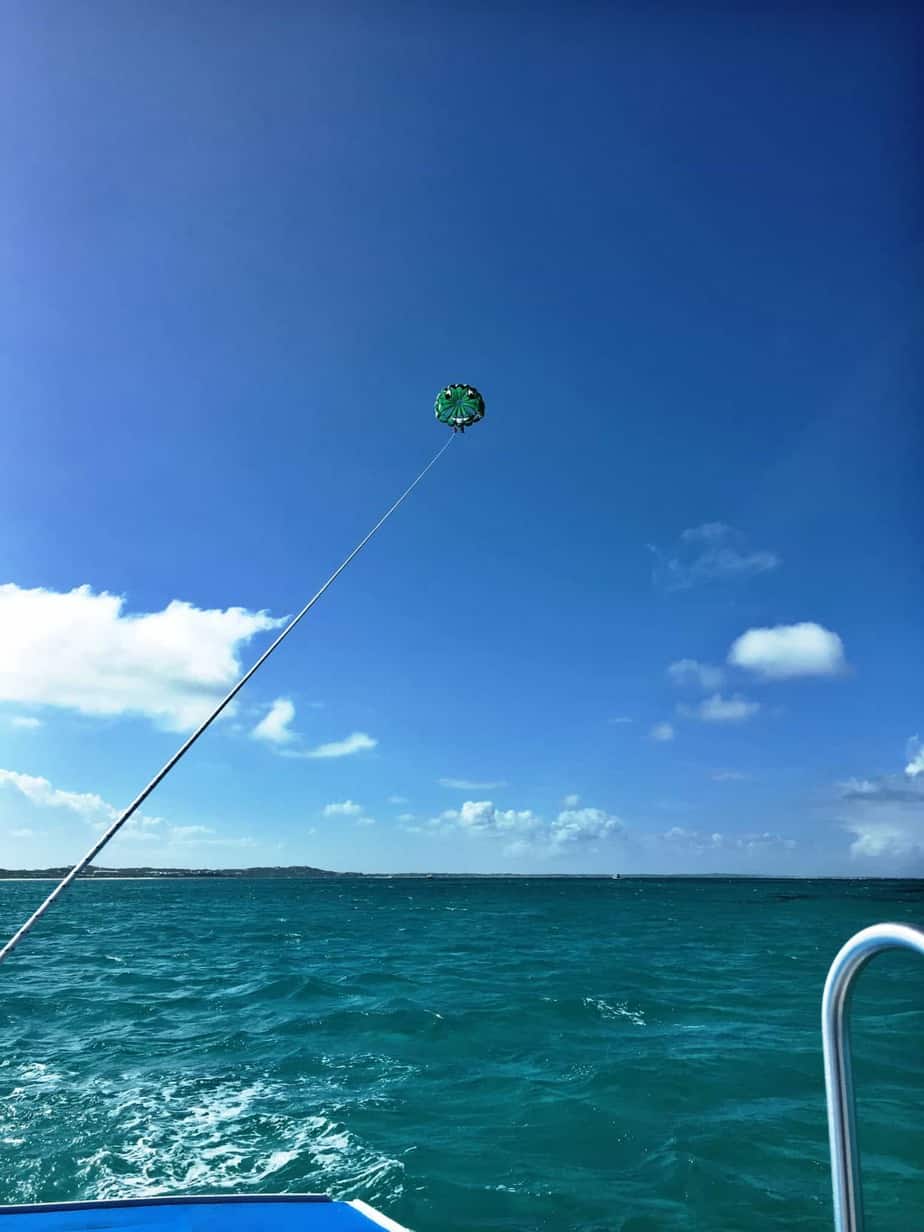 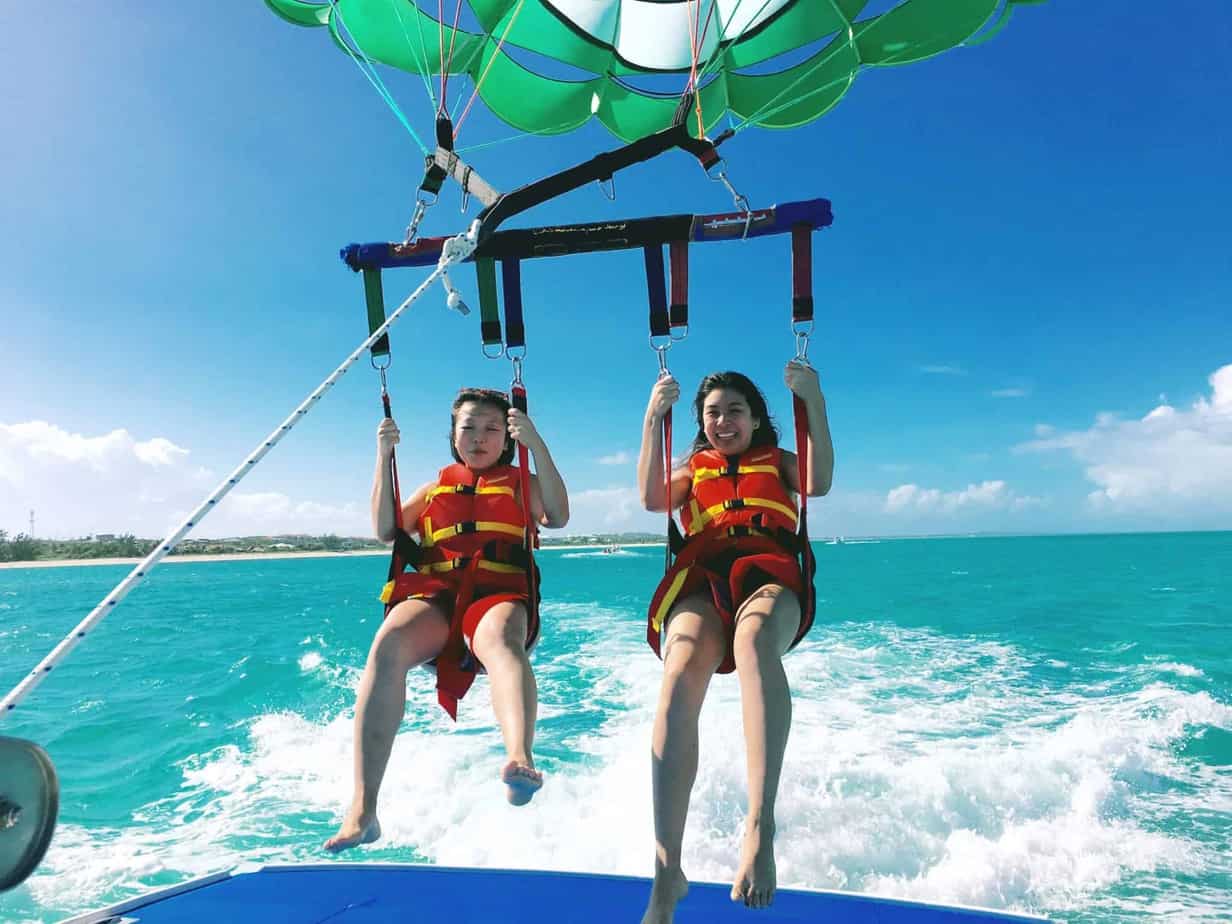 On the day we left, we had a relaxing lunch at our resort and headed out to the airport. We left quite a bit of time for travel which I wouldn’t necessarily recommend, mostly because the TCI airport is so small and we were sitting there waiting for most of the time. We would highly recommend the Turks and Caicos Islands to anyone looking for an affordable winter getaway.

Looking for more fun things to do in the Caribbean? Then you might want to check out these posts: