Trolltunga Hike Guide: One of the Best Hikes in Norway

Last weekend, my sister and I embarked on one of the most physically demanding challenges of our life. We hiked up to Trolltunga (“troll’s tongue”), a cliff jutting horizontally out of a mountain about 2,300 feet above the north side of lake Ringedalsvatnet in the city of Odda, Norway. While the hike has been gaining popularity as one of the best hikes in Norway in recent years, it is far from a mainstream tourist attraction that can be experienced casually; it requires thorough planning and preparation for a fun and safe experience. I’ll share with you our experience and our tips for hiking Trolltunga so that you can be best prepared for a fun and safe hike. Ultimately, despite some excruciating knee pain towards the latter part of the hike, the 11 hours we spent hiking was absolutely worth it for the view and for the sheer sense of accomplishment we received from having conquered one of the most difficult hikes in the world. 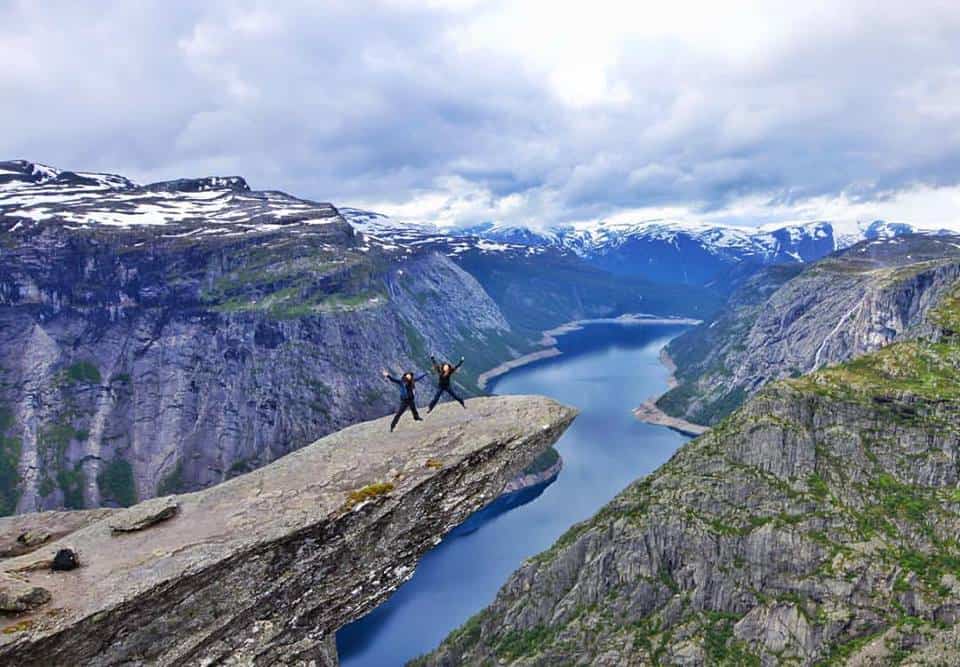 The day before our hike, we went to the grocery store and bought two long baguette loaves and some lunch meat and cheese. We made four sandwiches out of each loaf, which turned out to be the perfect amount of food for our 11 hour hike. Make sure you pack enough food for the day, as there are no opportunities for you to purchase food once you begin your hike.

We had originally planned our hike for July 1, but the online weather tracker for Trolltunga predicted lots of rain that day, so we pushed our hike back to July 2, which showed more promising weather. We had planned to arrive at the base of the hike at 6:00am, as the weather forecast showed sunshine from 6:00-12:00 and scattered rain from 12:00-6:00pm. After paying for parking and eating a quick breakfast (one of the sandwiches we packed), we began our hike at 6:35am. According to the website for Trolltunga, the entire hike is 23 kilometers (or approximately 14 miles), but this appears to be an exact, straight line measurement, whereas in reality the hike is closer to 26 km, or 16 miles. According to two GPS’s we carried on us that day, we ended up hiking 22 miles total due to an accidental detour we took, which I’ll talk more about later.

The first kilometer of the hike is an almost vertical ascent consisting of some rock steps and uphill climbs over sections of dirt/grass/twigs. It’s difficult to see from the photos below just how steep this ascent is, but imagine climbing stairs for one kilometer. It took us about 40 minutes to climb the first kilometer.

At the end of the first kilometer, the ground levels out a bit, and we came across some wide, flat rocks looking out onto the base of the mountain, with water cascading down. This is a great time to fill up your water bottle and take a breather after the rigorous first km. Speaking of which, there is no need to pack multiple bottles of water because all the water you encounter on your hike will be safe to drink, so when you see a small creek or cascade, fill up your water bottle and stay hydrated! 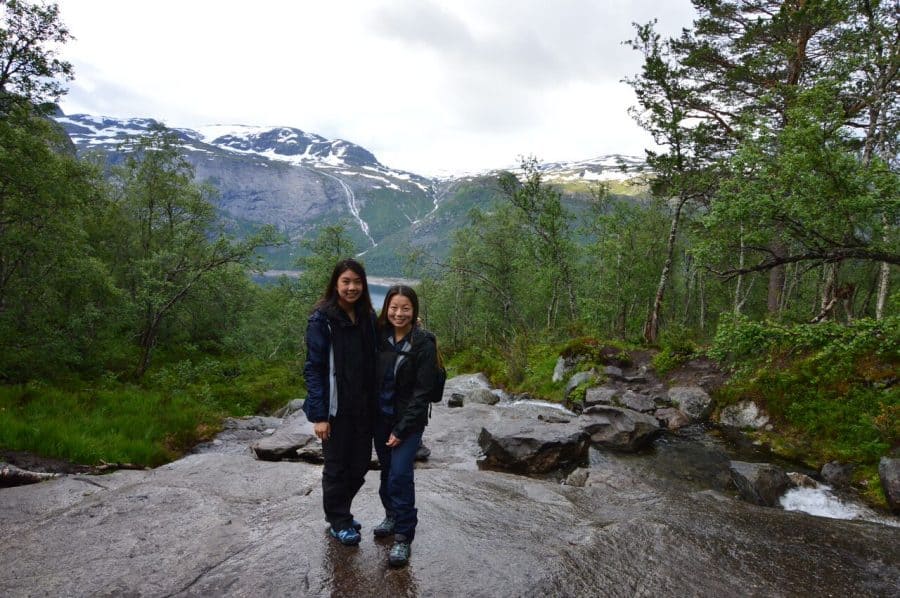 Still smiling after the first km

The next section (about 1 km or so) is mostly flat, with alternating rocks and planks guiding the way. This was by far the easiest section of the hike, so use this section to save up some energy for the remainder of the hike.

The flatlands lead to another ascent, although this time not nearly as steep as the first kilometer. Unfortunately I did not get any photos of this section as I was probably too focused on making it up the ascent to take out my camera. Near the end of the ascent, we ended up accidentally veering off the path, which contributed to the extra hour we took going up and down and the extra 6 miles or so that we ended up hiking. It was sort of a blind-leading-the-blind situation as we were following a group of hikers, and there were around 10 of us in the same vicinity of each other, for quite a while before someone looked at a map and realized we had gotten completely off track. The confusion mostly stemmed from the fact that the (wrong) trail we were following was also marked by the red T’s that we had been following to arrive at this point. I still have not figured out where those T’s lead, so if you’ve hiked Trolltunga and know of any alternate routes, please let me know! 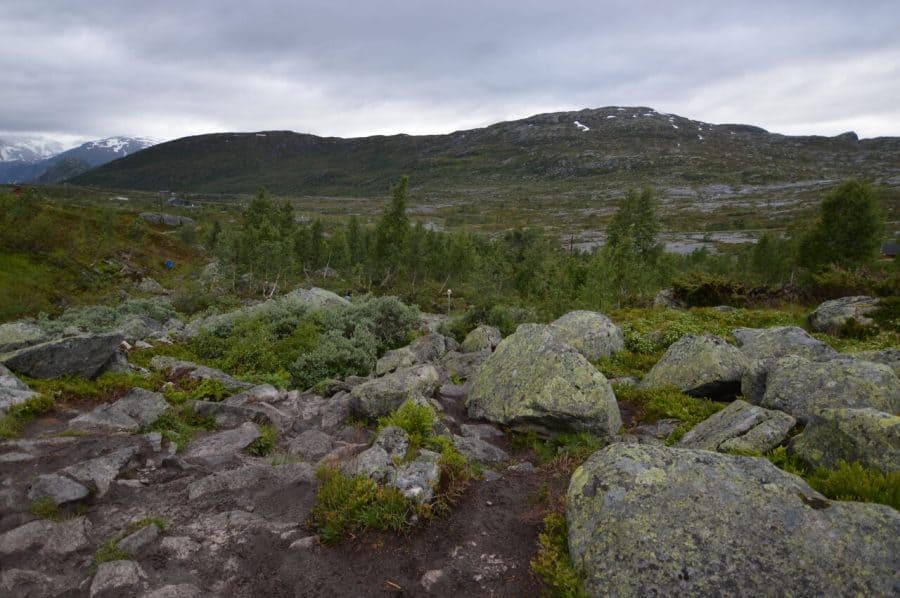 The ascent led to a rockier area 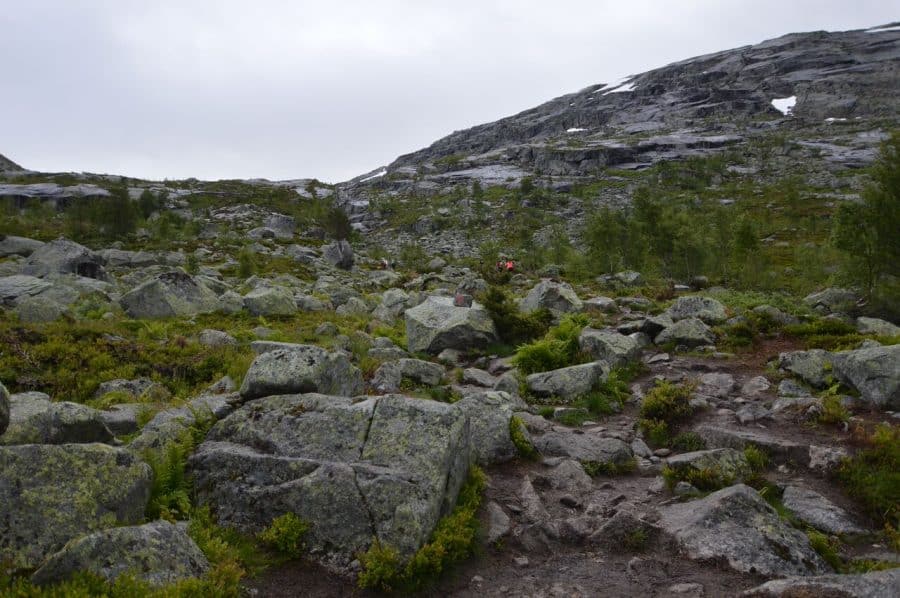 This is where we veered off the path. You can see the hikers in front of us who we were following 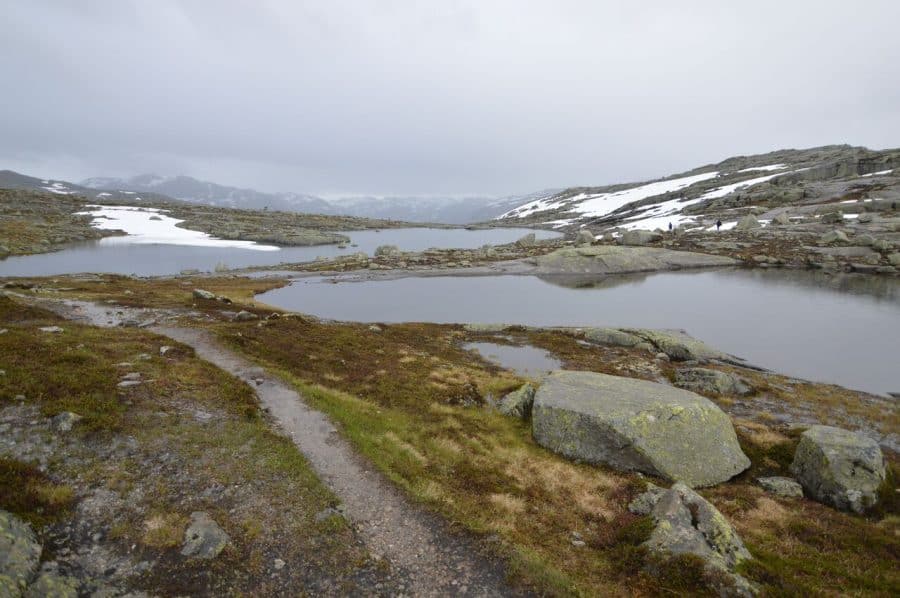 I think we were supposed to be was on the other side of the water, where you can see a couple of hikers in the distance 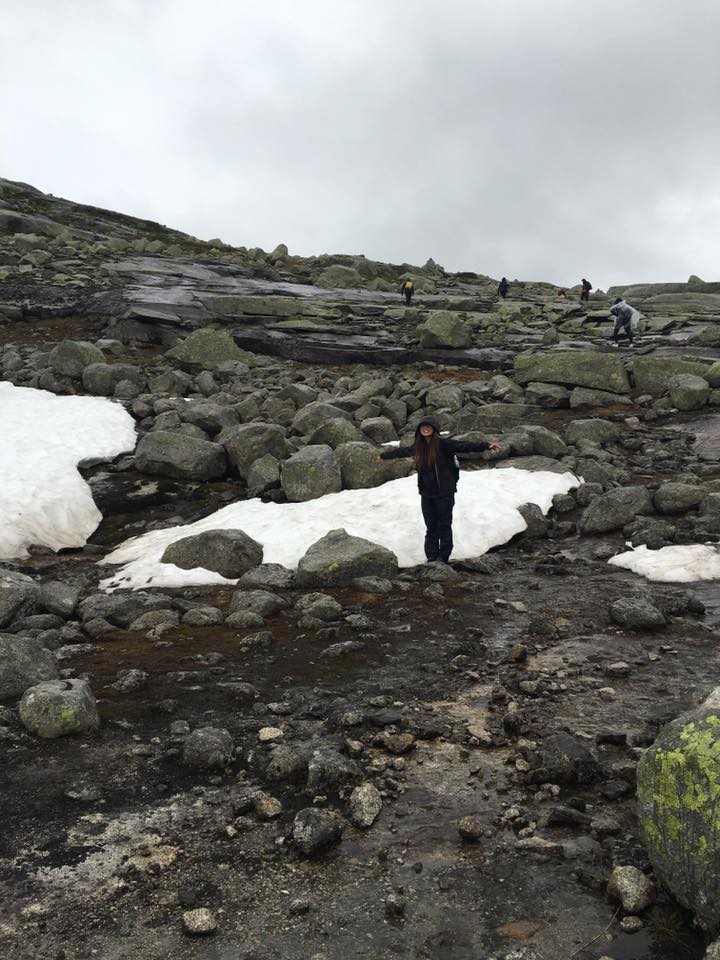 By the time we realized we had veered off track, we had climbed what was perhaps the second most challenging portion of the hike (after the first km), as we were scaling the side of a mountain. Many times we had to climb on all fours to get over a large rock, and as there was no clearly marked trail, we had to create our own. Once we realized our mistake, we had to climb all the way back down the mountain, which turned out to be an even bigger feat than climbing up, as many of the rocks were loose or slippery from the rain, and we again had to create our own trail. When we finally reached the correct path, we were drained and starting to feel some pain in our knees. At this point (around the 4km or 5km mark), my sister contemplated quitting and turning around, but I insisted that we keep going as this is what we set out to do.

Getting Back on Track

For the next five kilometers or so, the trail was undulating but nothing as exhausting as the first kilometer. I do not have many photos from this portion of our hike as we were already quite exhausted and simply wanted to reach the top as quickly as possible. Here are the few I was able to get. 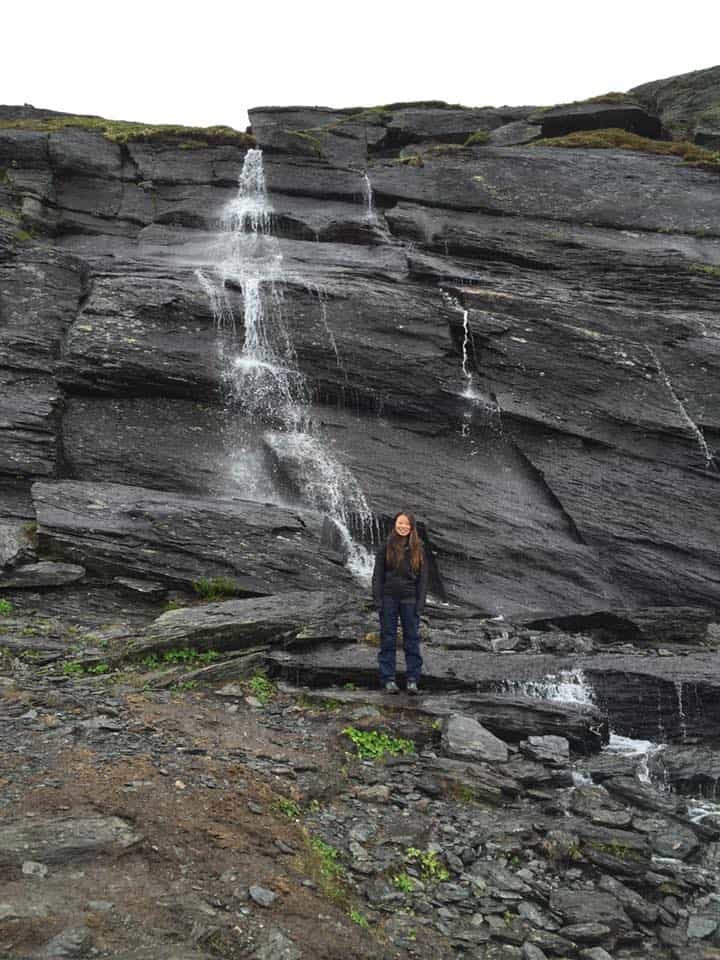 A nice waterfall around 7km 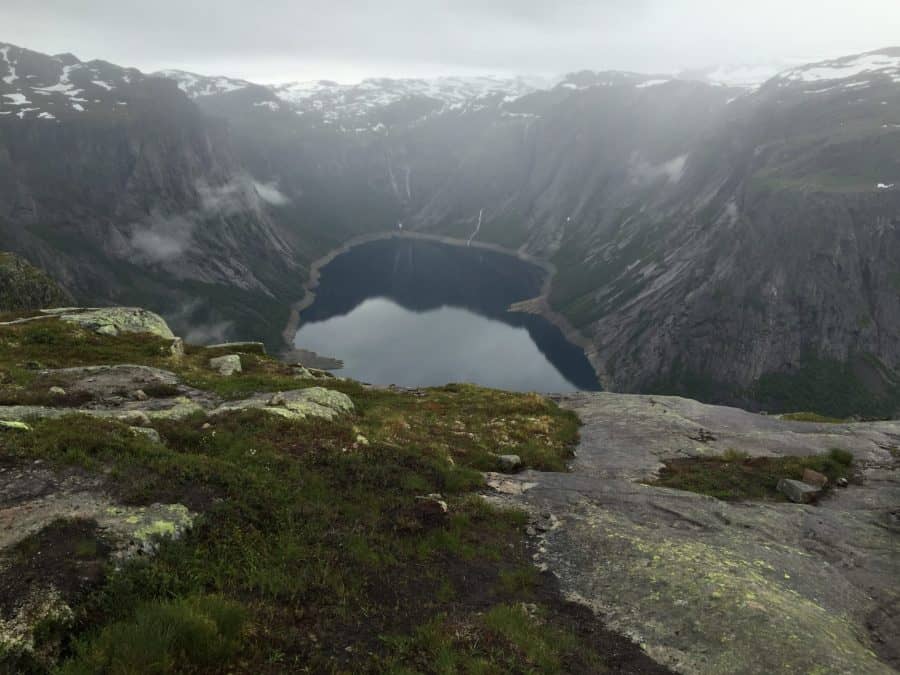 It had started to drizzle a bit at this point, but the view was still beautiful

At last, we reached the top around 11:45am, approximately five hours after we began, including our accidental detour which took around one hour. When we reached the top, there were already a lot of people there and a queue to go out onto the cliff for photos. We asked a stranger to take our photo for us, and I found that everyone was very generous about taking photos for each other as everyone wanted a photo on the ledge. The view was stunning, to say the least. The ledge was pretty big, so it wasn’t that scary walking out, but as I was inching toward the far edge of the cliff on my bottom to get a photo sitting on the ledge, I made the mistake of looking down into the valley and felt a moment of panic before quickly moving away from the edge. 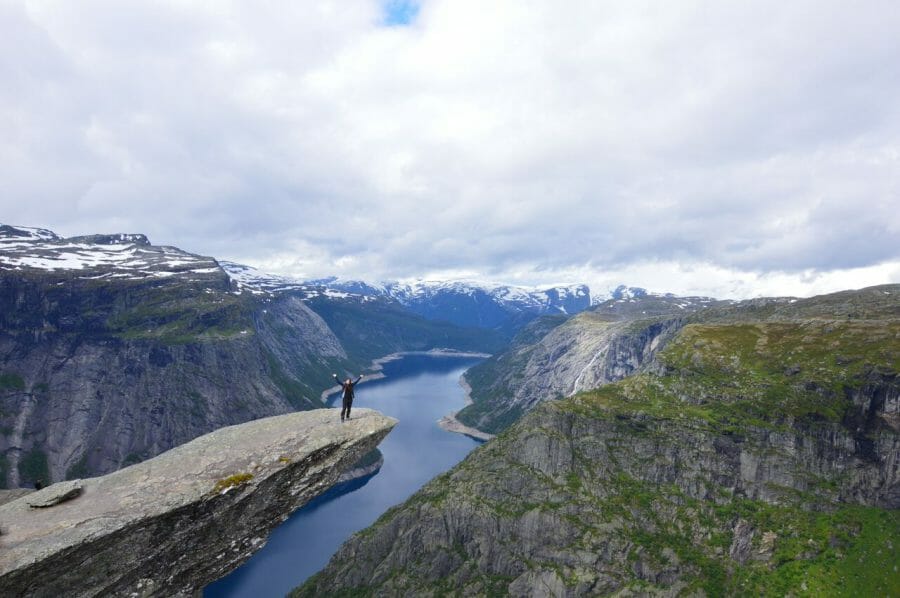 My sister on the edge of the cliff 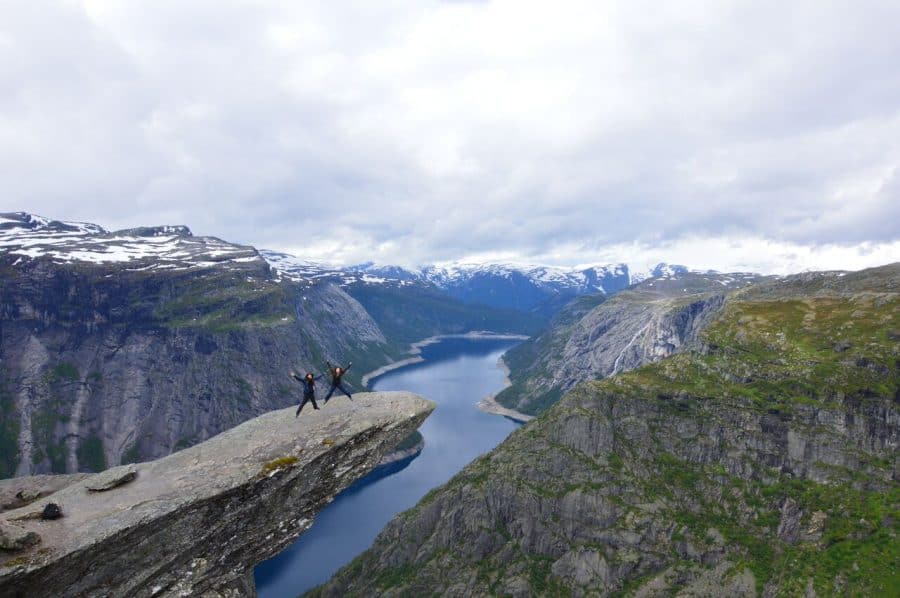 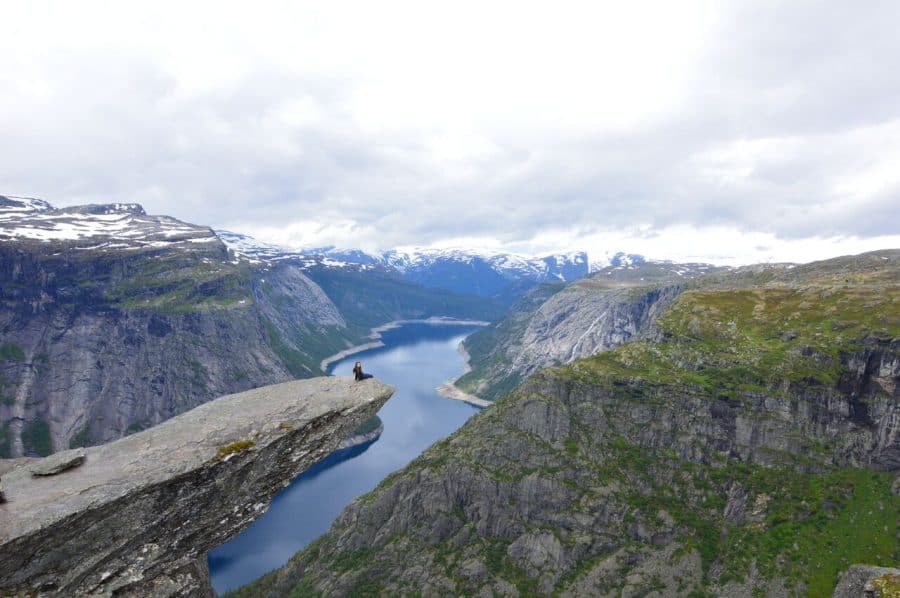 Me sitting on the edge of the cliff, after I made the mistake of looking down. Probably a good thing you can’t see my face clearly in this photo

There was also another area off to the side of Trolltunga, where there was no line for photos and much fewer people. We sat there for lunch, and my sister took a little rest, which made for a great photo. 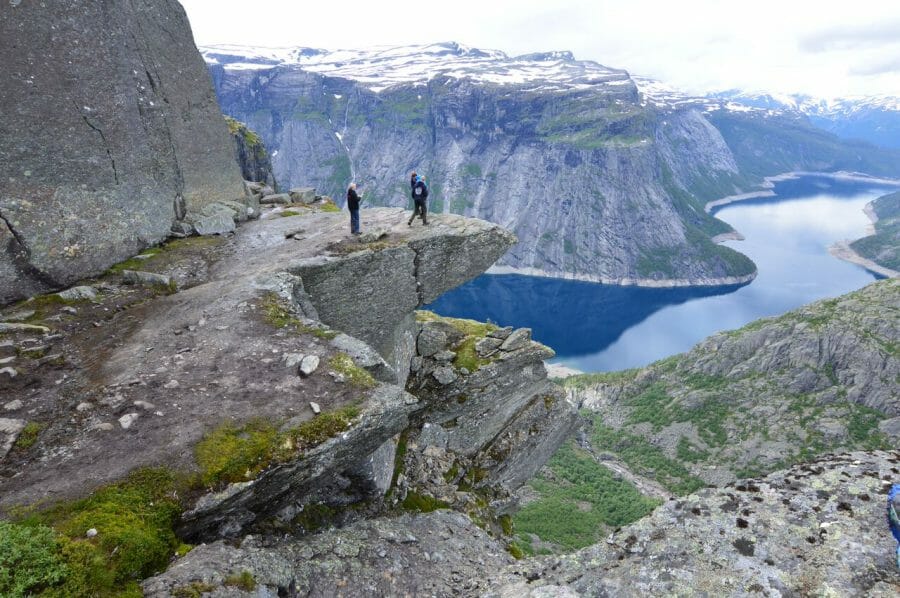 The less crowded area off to the side 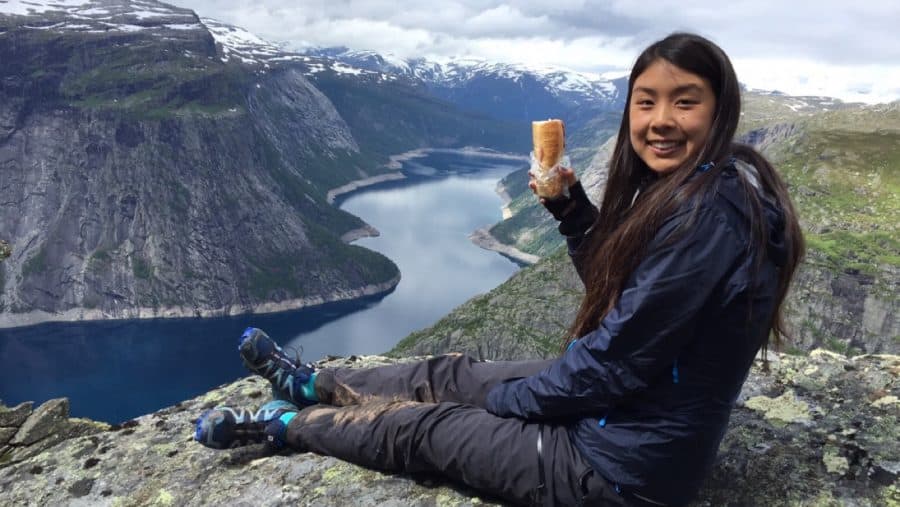 Lunch with a view 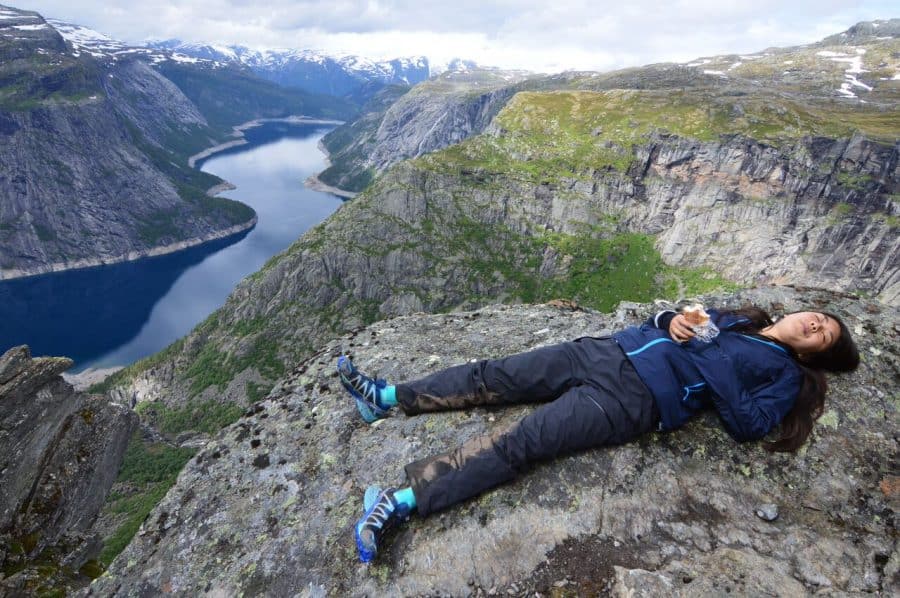 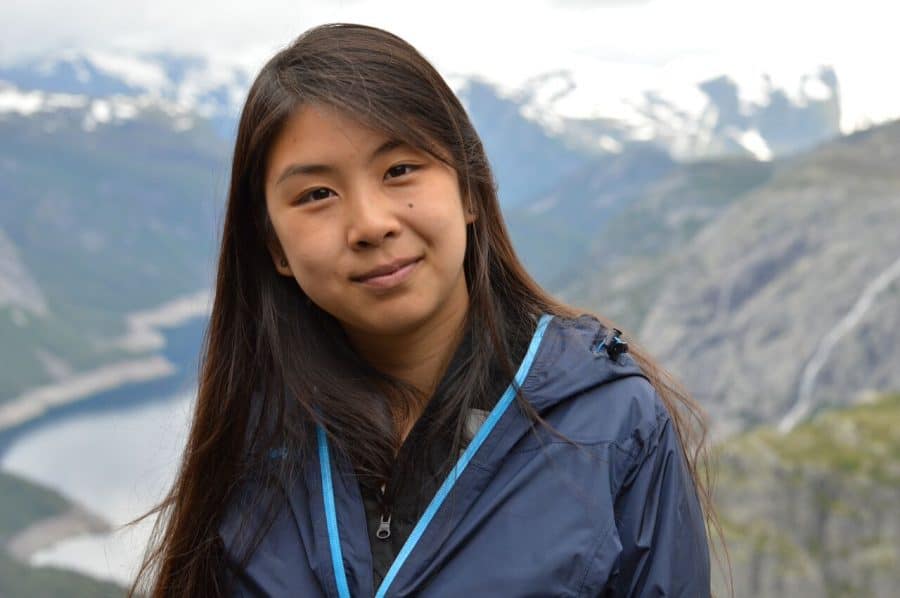 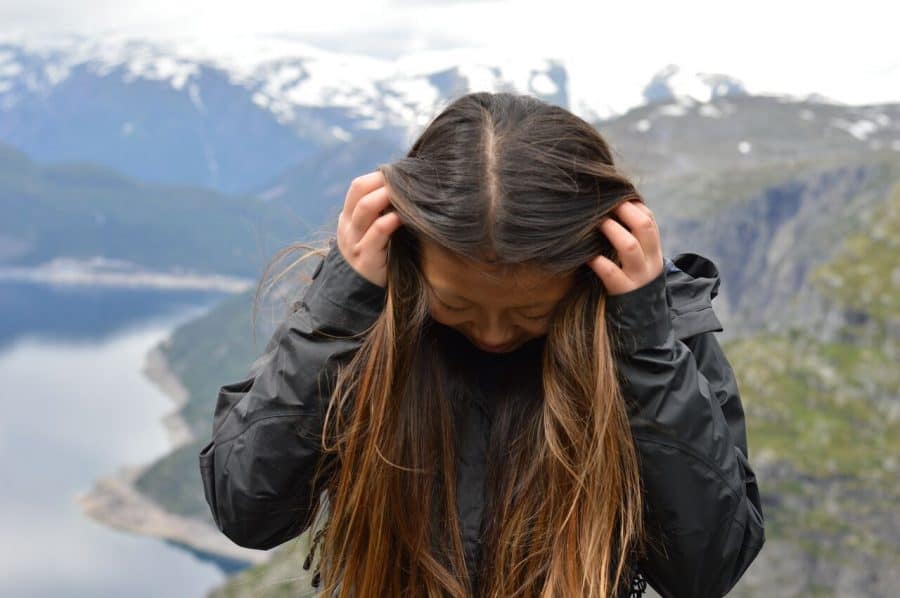 The hike back down was very challenging for us. My sister had sprained her ankle a few weeks ago, and although we had taped it up for this hike, she still felt some pain from her previous injury. My knees started to hurt so intensely around halfway down that it took us an entire hour to hike one kilometer at one point. By the time we reached the bottom at around 5:30pm, we could hardly walk at all, and my hands were completely swollen, which I later found out is a pretty normal side effect of going on a long hike due to the body’s decreased sodium levels and increased water intake, which travels into the cells and causes them to swell. My hands had returned to their normal size by the next morning.

While all of that sounds quite painful, it was 100% worth it. The views along the way were breathtaking, but more than that the sense of accomplishment I received upon completing the hike is something I still feel today. I proved to myself that I could do something I don’t typically do, and now any other challenge feels less challenging compared to the day I hiked 22 miles and almost could not walk at the end of it.

We also saw a number of people camp on the mountain. If you’re looking to break up your day, it may be a good idea to camp overnight near the top of the mountain. This way, you will also be able to enjoy the view at Trolltunga before the crowds arrive. If you’re new to camping, please read this guide for dealing with emergencies while camping before you go.

Also keep in mind that neither my sister nor I trained for this hike. While I’d like to think I am relatively in shape for someone who sits at a desk for 10+ hours each day for her job, if this is your daily situation, working out a few times a week will not prepare you for this hike. I would recommend training on a stair machine (or walking up and down stairs in a building) every day in preparation for this hike, and doing some endurance training as well. I also have a history of knee problems (tendonitis and ligament sprains) and did not do any physical therapy to prepare my knees for the intensity of this hike. Keep in mind you will be hiking on average 10-12 hours, so that is the level of endurance you’ll need to be prepared for.

Alternatively, if you would prefer to go with a trained professional, you can book a tour through this link and use code MVMT for a 5% discount.