What To Eat In Japan: An Introduction To the Japanese Izakaya With MagicalTrip 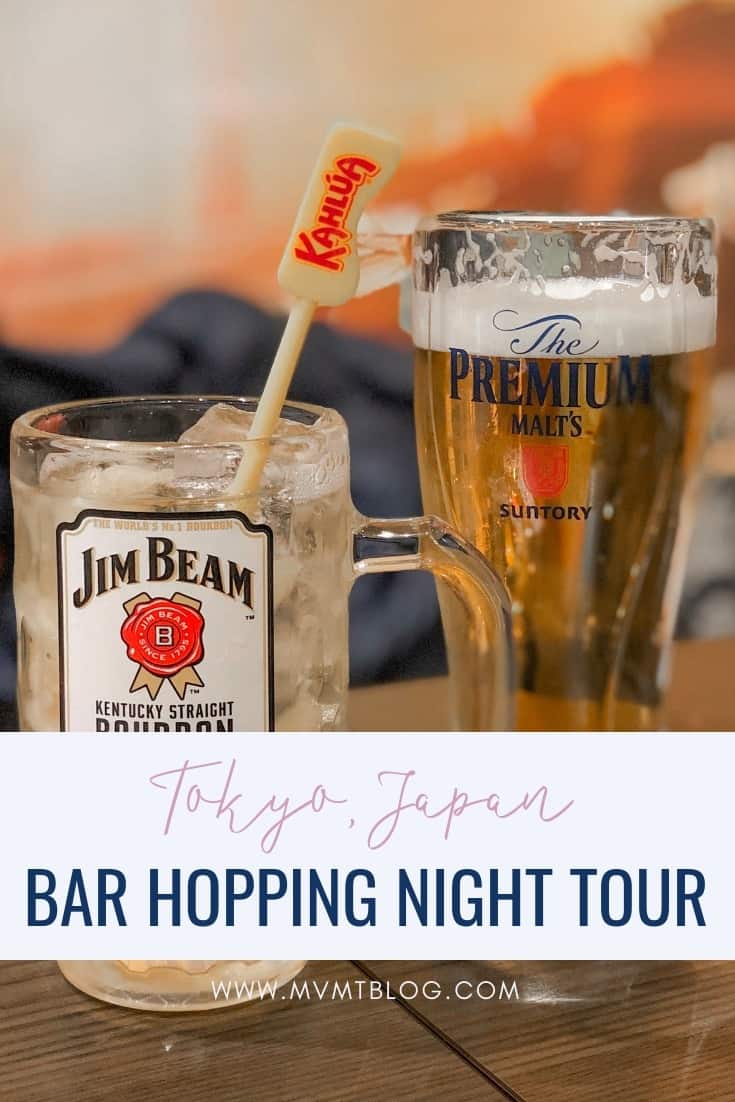 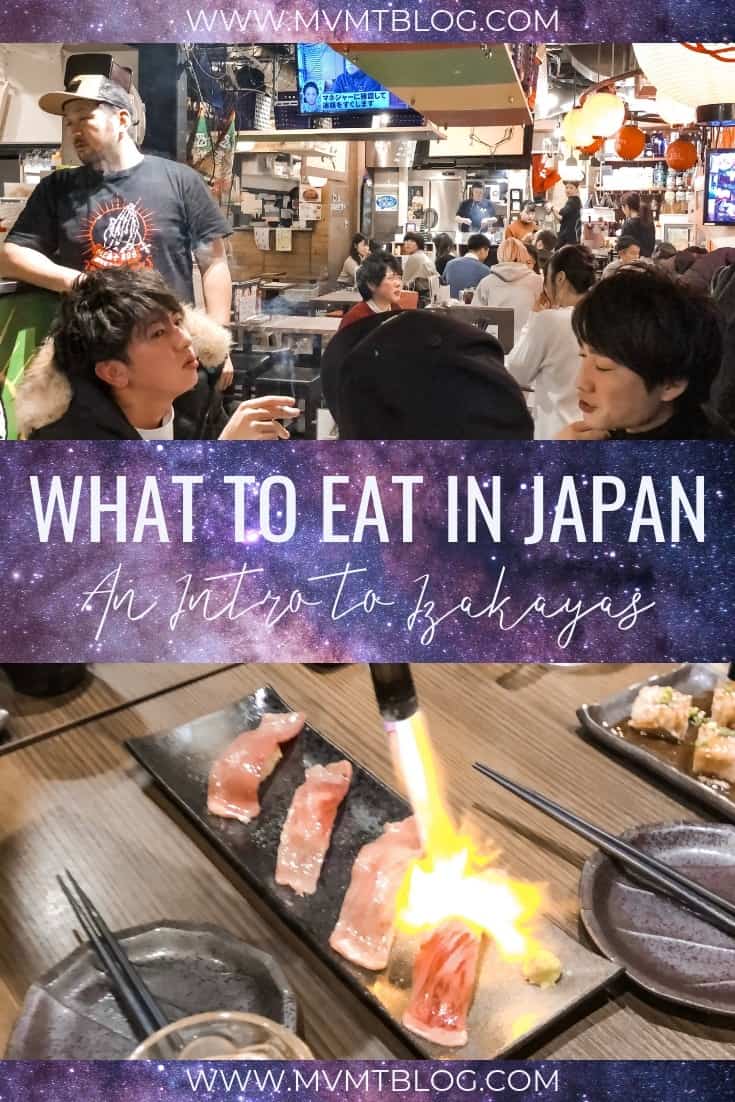 When Hope and I visited Japan for the first time last month, one of our primary goals was to indulge in as much traditional Japanese food as possible, and we knew we’d be able to find some of the best things to eat in Japan at an izakaya, or a traditional Japanese pub. If you’ve never been to an izakaya before, imagine the Japanese version of a mix between an Irish pub and a Spanish tapas bar. After work, locals head to izakayas for a few drinks with co-workers or friends and some small dishes to share amongst the group in a casual setting. While the entire experience of an izakaya is very casual and approachable, visiting an izakaya for the first time as a foreigner can feel intimidating, as it’s easy to find an izakaya menu without an English translation and izakaya staff who speak very little English in a restaurant full of locals in suits who came straight from work. That’s why, when you’re wondering what to eat in Japan, we recommend getting an introduction to the Japanese izakaya with MagicalTrip’s Shibuya Bar Hopping Night Tour in Tokyo.

Tokyo is comprised of 23 city wards, and Shibuya is without a doubt one of the busiest and most lively. It is known as the fashion and entertainment center of Tokyo, and with that comes the need for a lot of good food to sustain the hungry shoppers and entertainers. We chose to go on the Shibuya Bar Hopping Night Tour with MagicalTrip because we knew there would be no better place to experience an izakaya for the first time than one of the busiest neighborhoods in Tokyo, and let’s be honest, we wanted to see the famous Shibuya Crossing.

As many as 2,500-3,000 people cross Shibuya Crossing, the intersection outside Shibuya Station, at any given time. That’s like if my entire high school were to cross this intersection at once — and I went to a very large high school! Somehow our guide, Ken, managed to get a photo of our group in the middle of the crossing without getting run over by people or cars. Now, that is true magic. 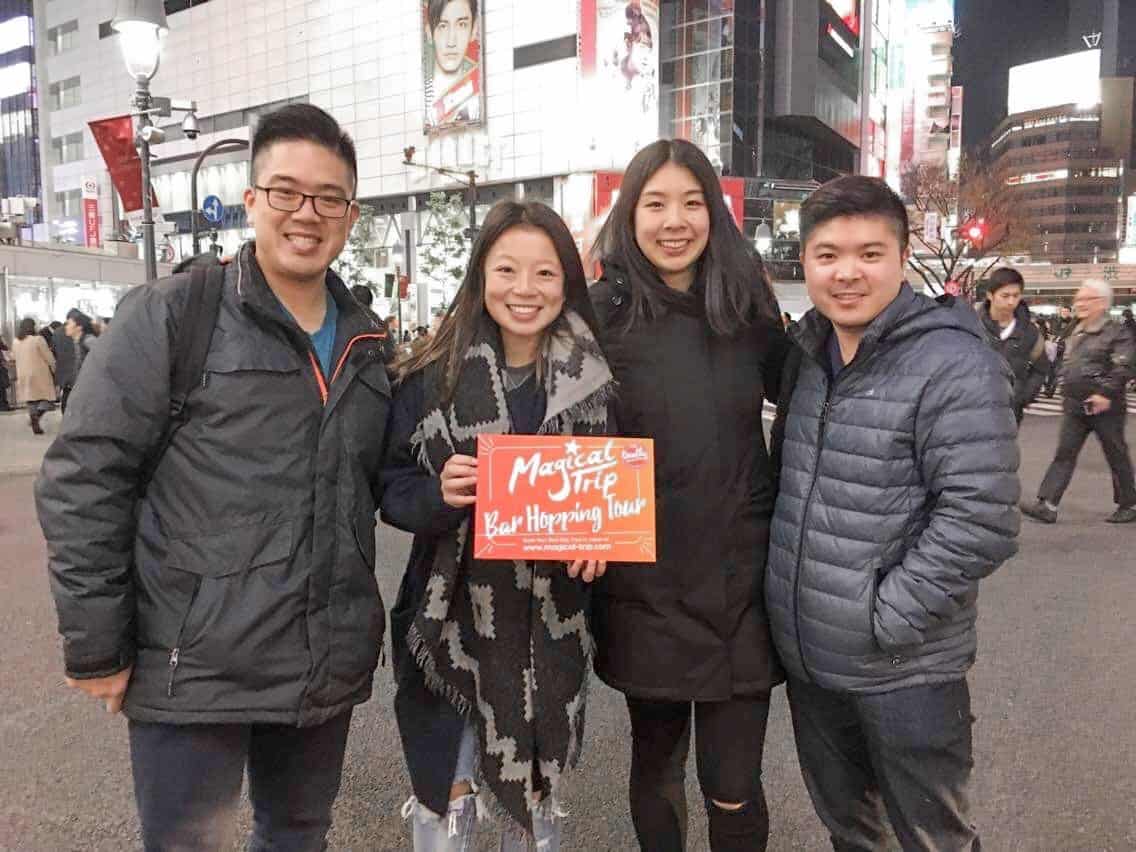 After meeting up with our guide, Ken, and the two other members of our tour – two brothers from Toronto – we headed back toward Shibuya Crossing and managed to get a group photo in the middle of one of the busiest intersections in the world. Over the next four hours, we visited three izakayas and were introduced to numerous traditional Japanese foods and drinks while learning more about Japanese izakaya culture (and Japanese culture in general) through our wonderful guide, Ken.

Our first stop was a seafood izakaya with multiple floors but only a very small space on each floor. Many restaurants in Tokyo were stacked upwards in order to accommodate Japan’s large population on small plots of land. 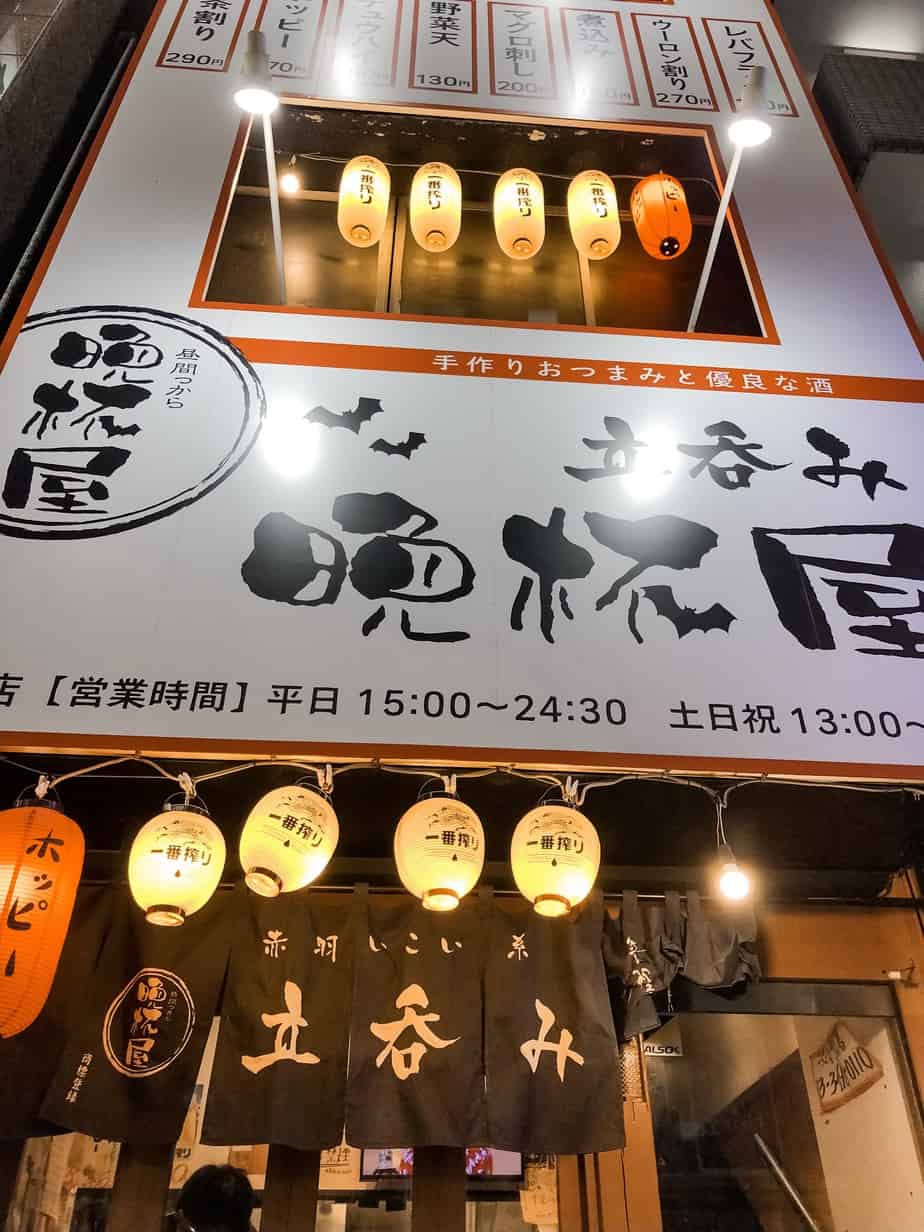 We climbed a few flights of stairs until we reached an area with an empty table and empty seats that had been reserved for our group. The izakaya was already pretty busy by the time we arrived at around 7:30pm on a Tuesday night and got busier throughout the night, which we were told is typical as Japanese people love to go out for drinks after work on any night of the week. 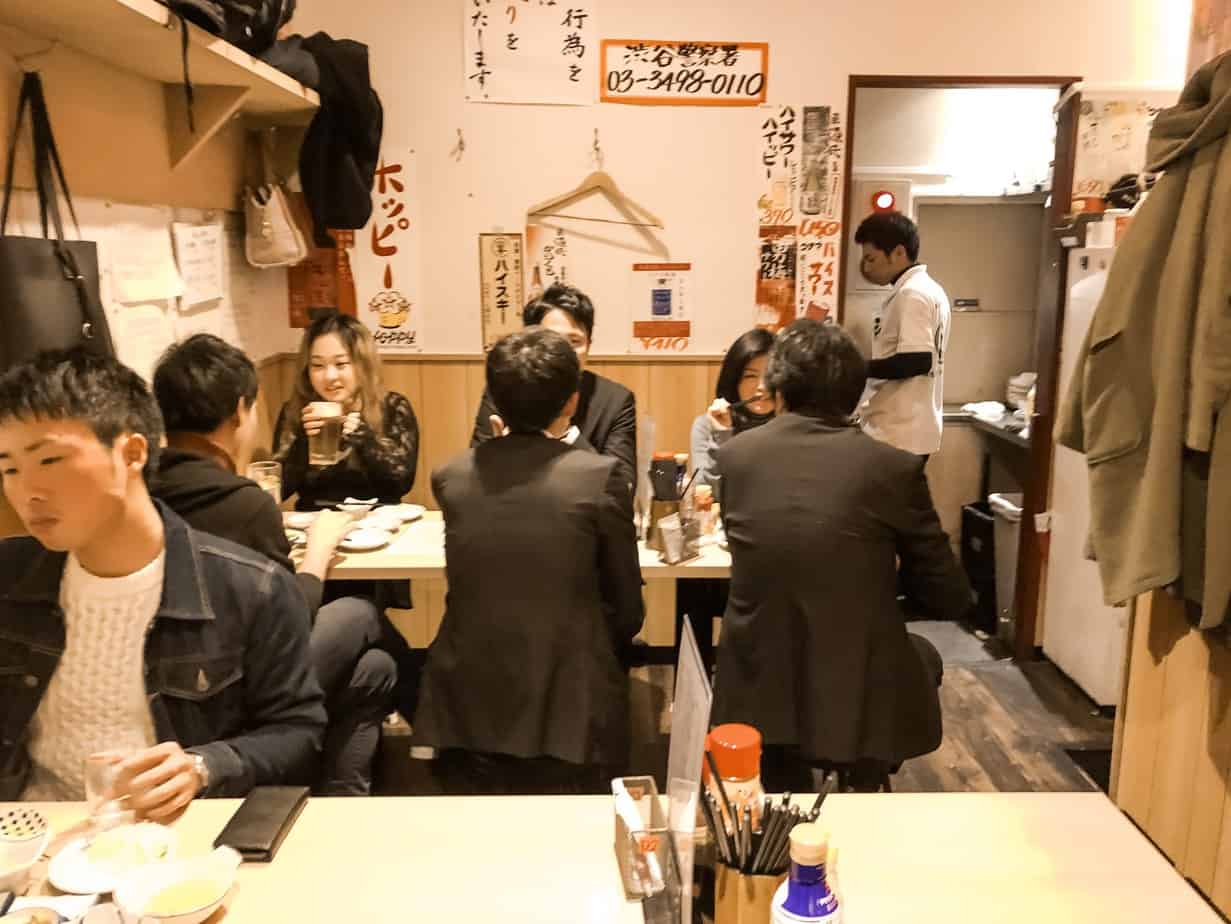 Like many izakayas that carry English menus, the English menu at this seafood izakaya was much smaller than the Japanese menu. Just compare the two for yourself: 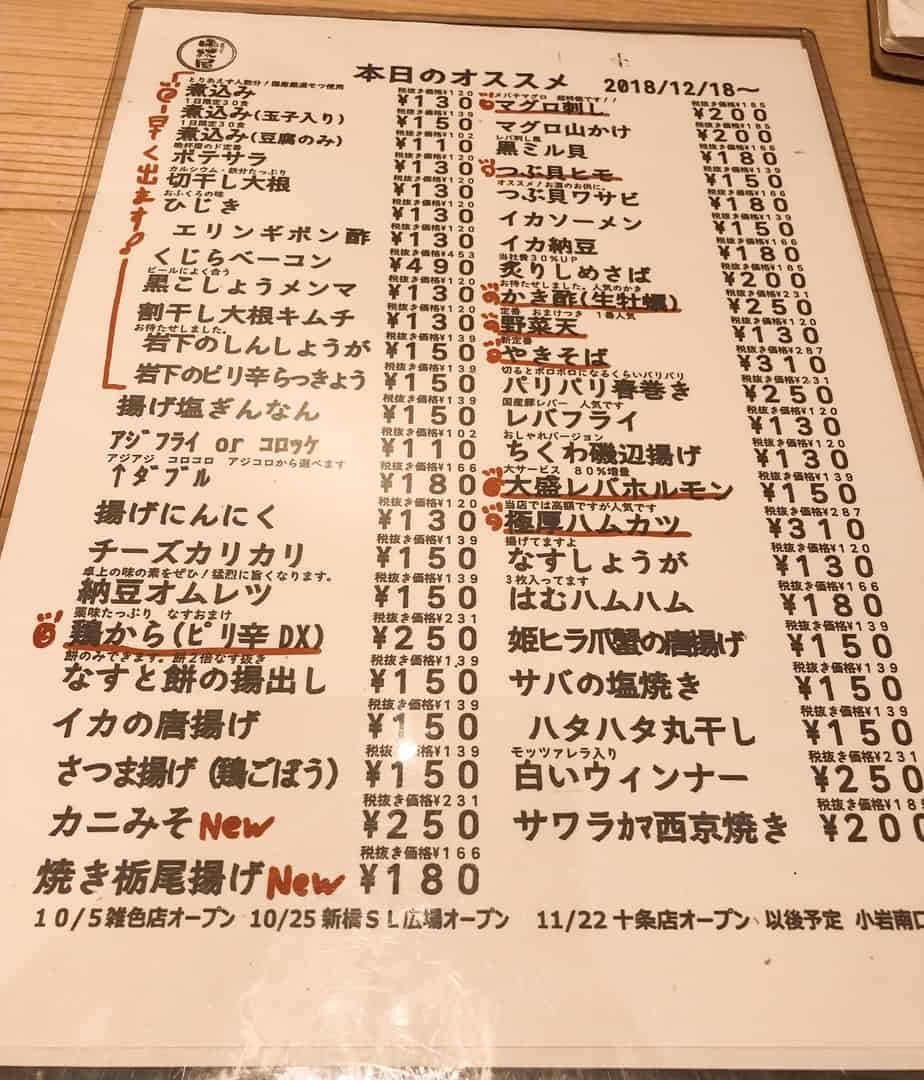 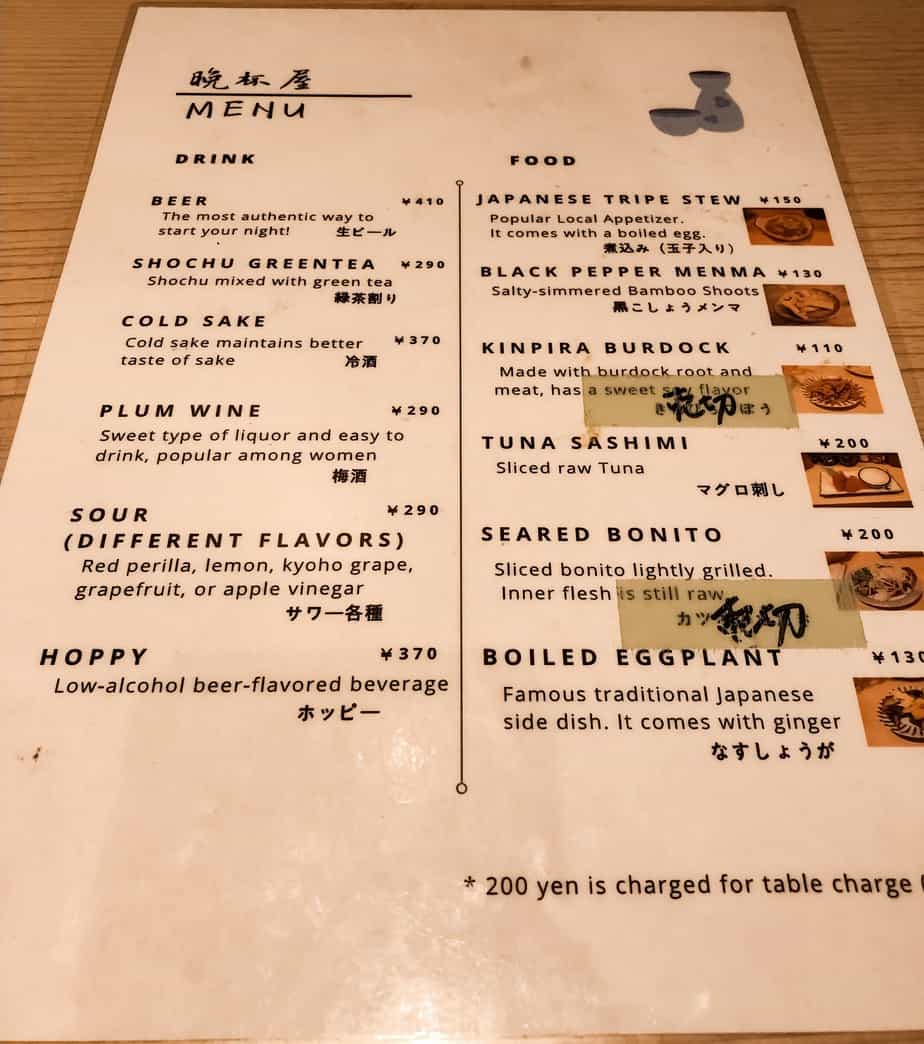 Luckily, we had Ken with us to translate all the items into English for us so that we could order off the Japanese menu as well. We were skeptical at first about trying Japanese tripe stew, as we hadn’t had any tripe that we loved, and we’ve eaten a lot of tripe (including Chinese tripe, Romanian tripe stew, etc.), but Ken talked us into trying it out as it is a local specialty. Let me just say, it tasted nothing like any tripe we’d eaten in the past. It was delicious. I would highly recommend that you try Japanese tripe stew when you visit Japan. 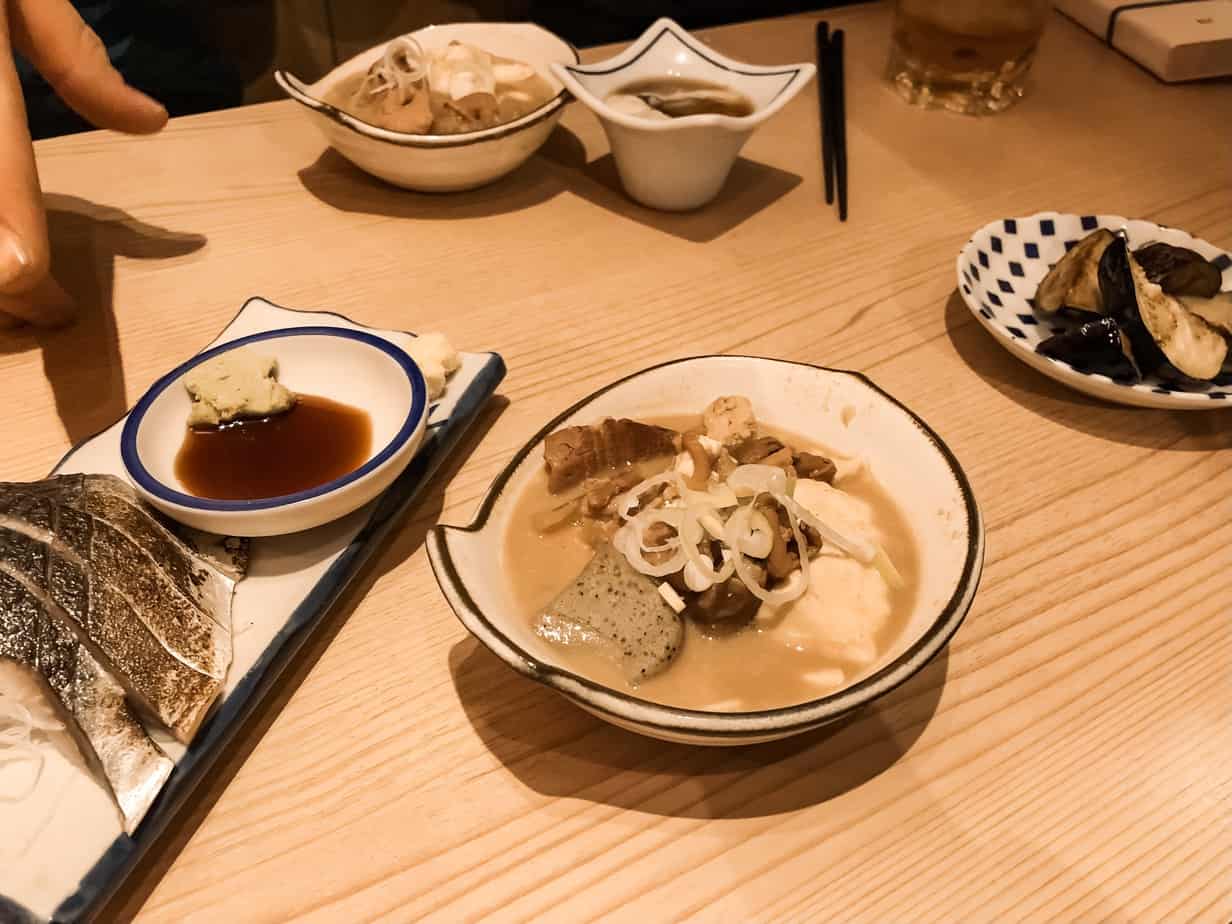 We also ordered the grilled eggplant and mackerel sashimi (they were out of tuna for the day), which were both delicious as well. To wash it all down, we ordered Japanese plum wine with soda, which was a first for us. While the cocktail was a bit watered down for my taste, I was able to catch hints of the plum wine, which tasted sweet but not overbearing. At some of the later izakayas, and later on in our trip, we ordered plum wine on the rocks, which allowed us to taste the flavors a lot more clearly. We would highly recommend ordering plum wine at a few different restaurants and bars, as each establishment makes plum wine in its own special way, and no two plum wine recipes taste the same.

After visiting our first izakaya, which was the most “local” izakaya out of the three, we took a short walk across Shibuya to our second izakaya, which was located inside a building with 27 izakayas. The second and third stops on our izakaya bar hopping tour of Shibuya were both located inside this building. We were told that it is not uncommon to find buildings like this or entire floors within buildings that house only izakayas. 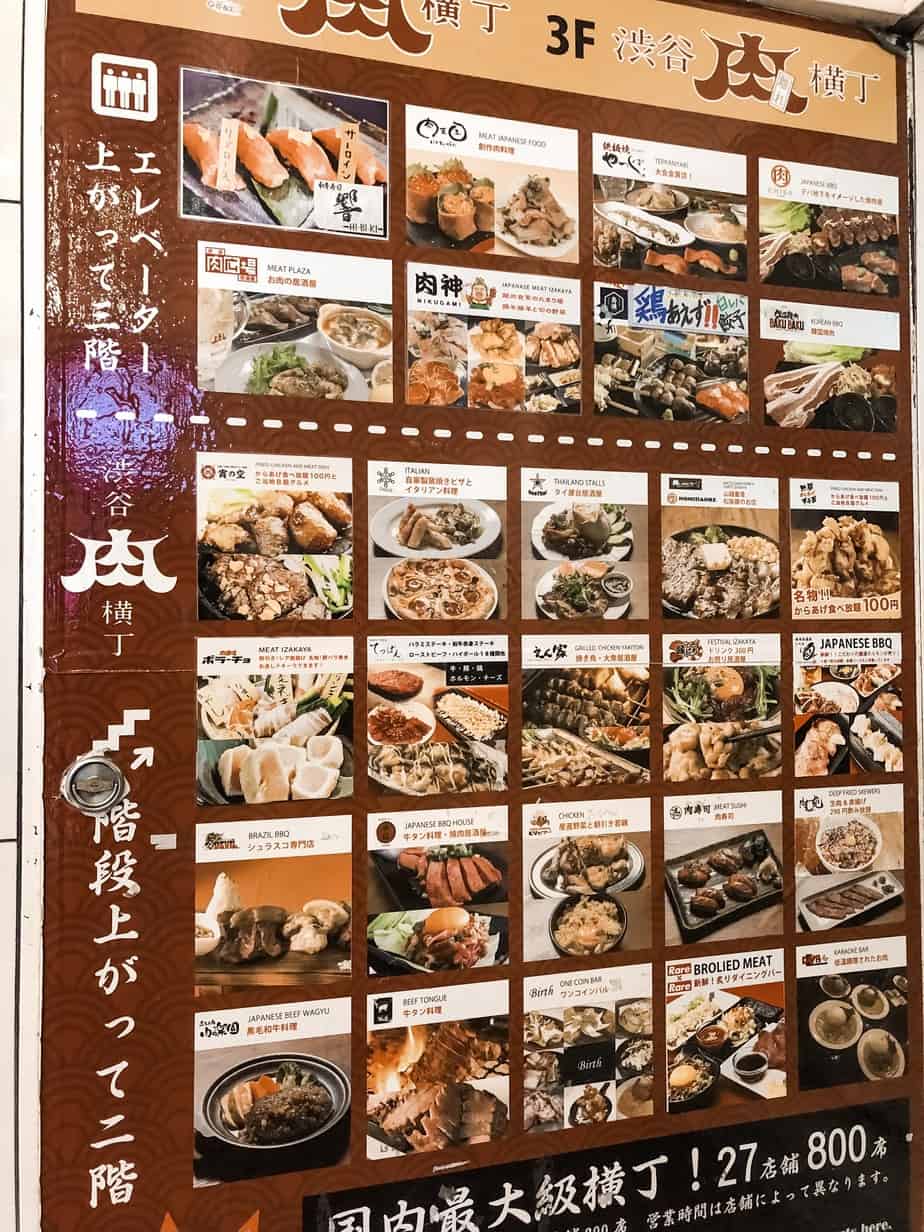 The billboard on the first floor introducing all 27 izakayas

As soon as we walked into the second izakaya, we realized that it was a much bigger and livelier crowd than the more reserved and quiet atmosphere of the first izakaya. One interesting fact about Japan is that it is illegal to smoke outside, but it is legal to smoke inside. We walked past clouds of smoke to a quiet area in the back of the izakaya where a table had been reserved for our group. 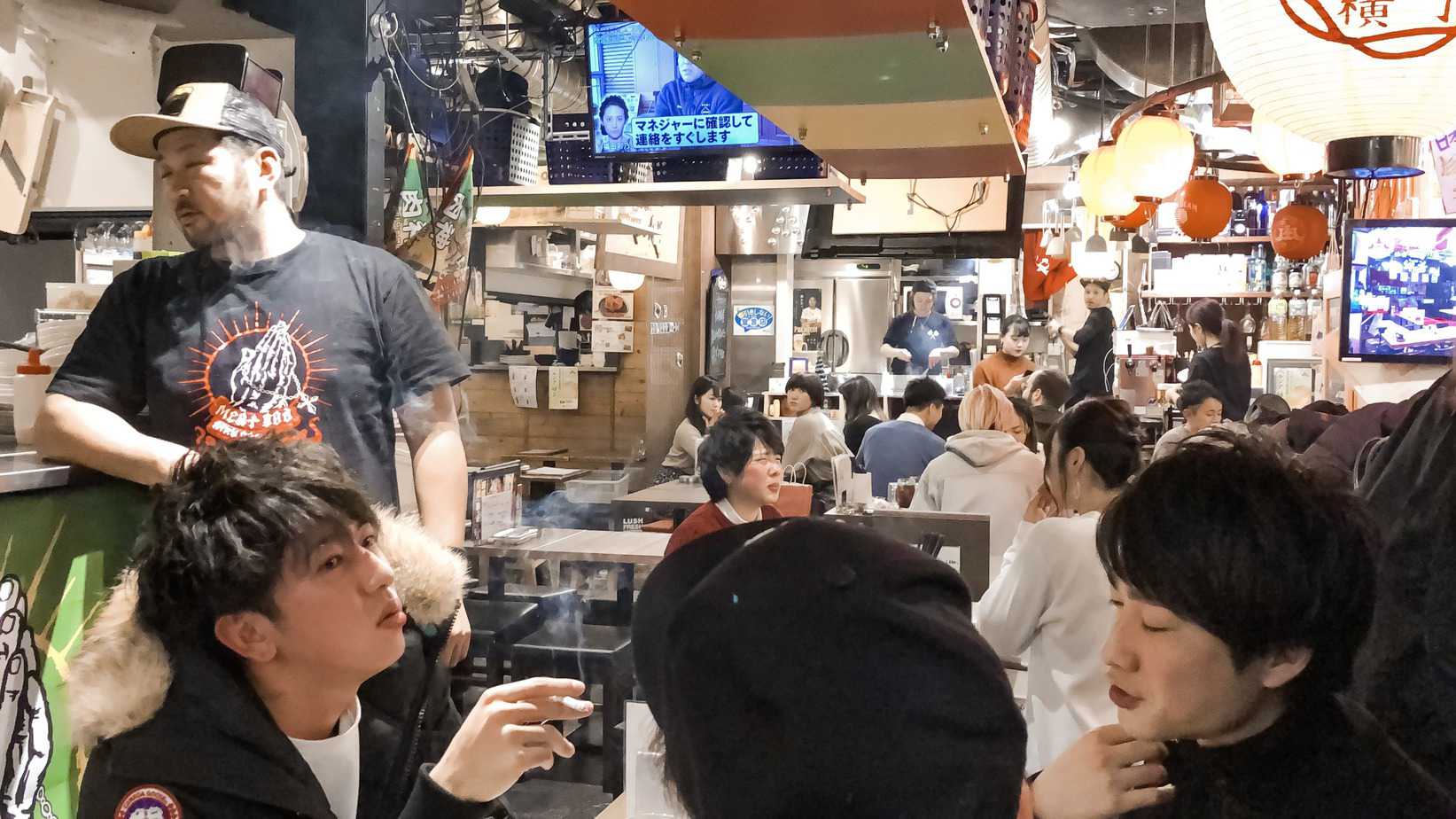 Here, we were given the option of two drinks and one large plate. Ken did a great job of explaining what each of the dishes was made of and providing his personal recommendations. One thing I really appreciated about Ken throughout our time together was that he gave very honest and well-rounded answers, whether it was about food and drinks or Japanese culture and societal norms. This stood out to me because many tour guides I’ve had on food tours in the past have given what seemed to be very one-sided viewpoints that only covered the positive aspects of a country’s culture and practices.

Hope and I opted for different dishes at this izakaya so that we could try multiple items on the izakaya menu. I ordered the Wagyu Sushi, and Hope ordered the Grilled Beef Sushi Rolls, and neither item disappointed. The beef on both dishes was cooked to perfection: tender and loaded with flavor. We were both pleasantly surprised when the waiter brought out a flame torch with our plate of Wagyu Sushi, which he proceeded to flame grill right in front of us. Now we know the right way to eat wagyu beef! 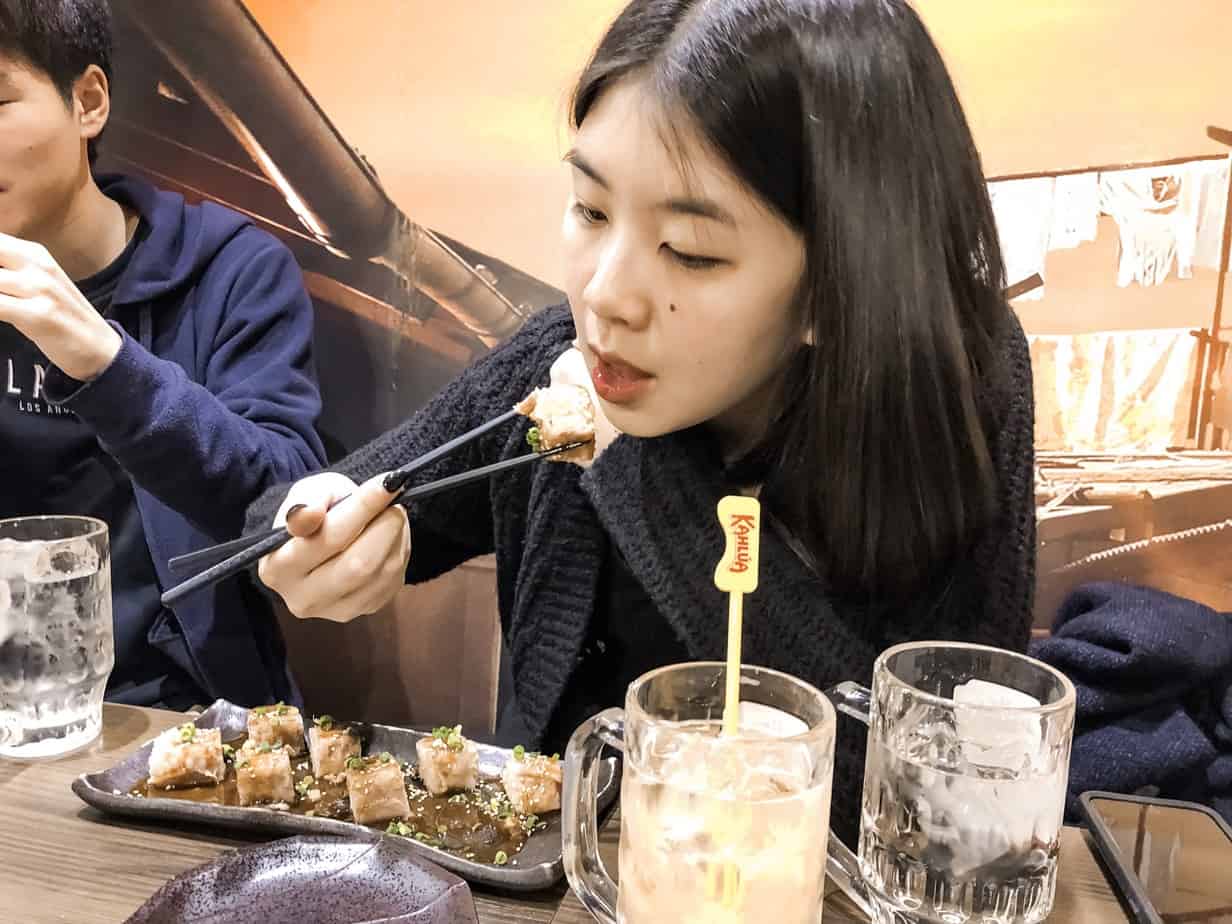 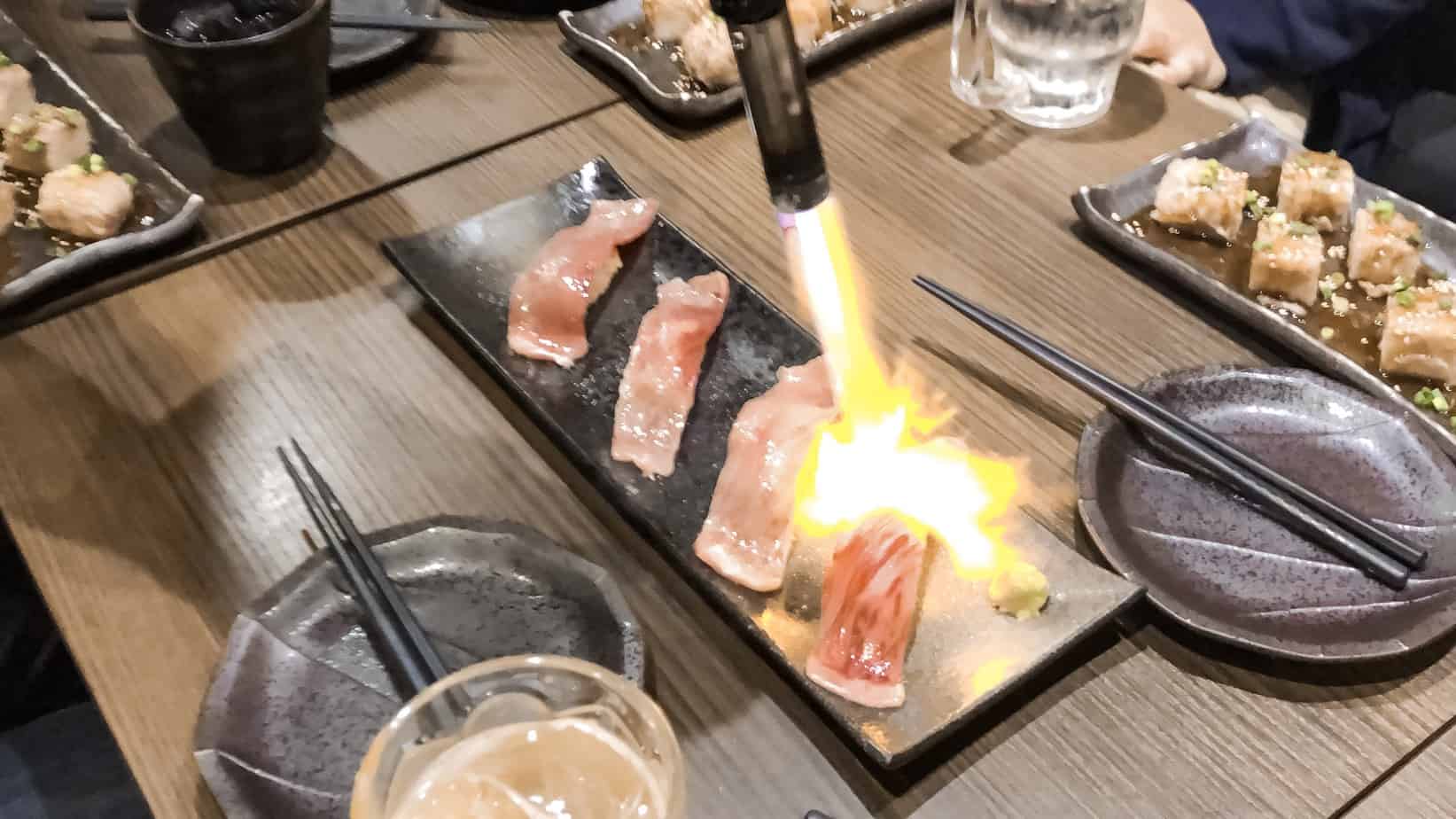 Bringing out the flame torch!

To wash it all down, we ordered a draught beer and a whiskey highball, which we discovered to be a very popular drink amongst locals. In general, I found most of the mixed drinks in Japan to be on the lighter side, while Hope found them to be perfect. Let’s just say, if you’re used to your drinks being made on the strong side, opt for sake or whiskey on the rocks, and if you prefer your drinks to be more mild, opt for a highball or plum wine with soda. 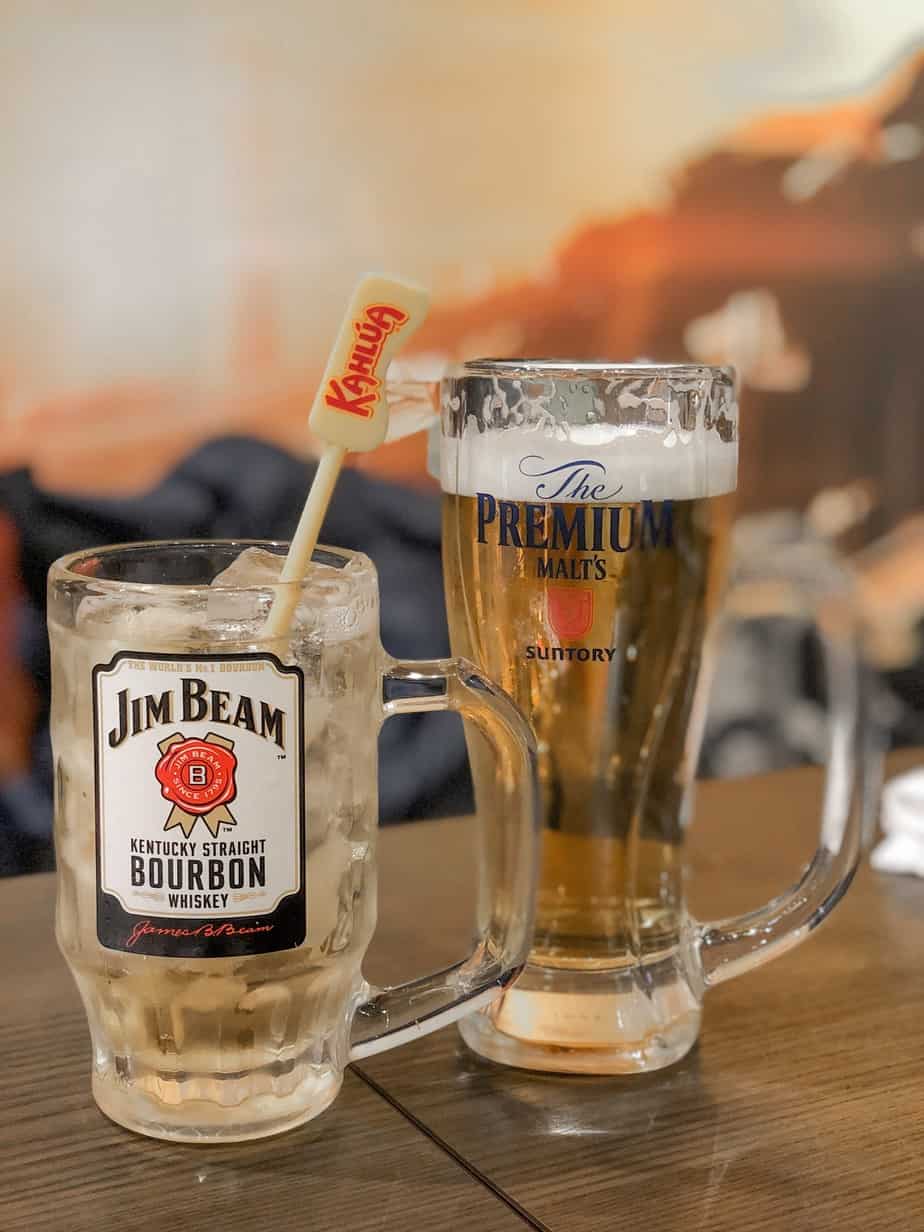 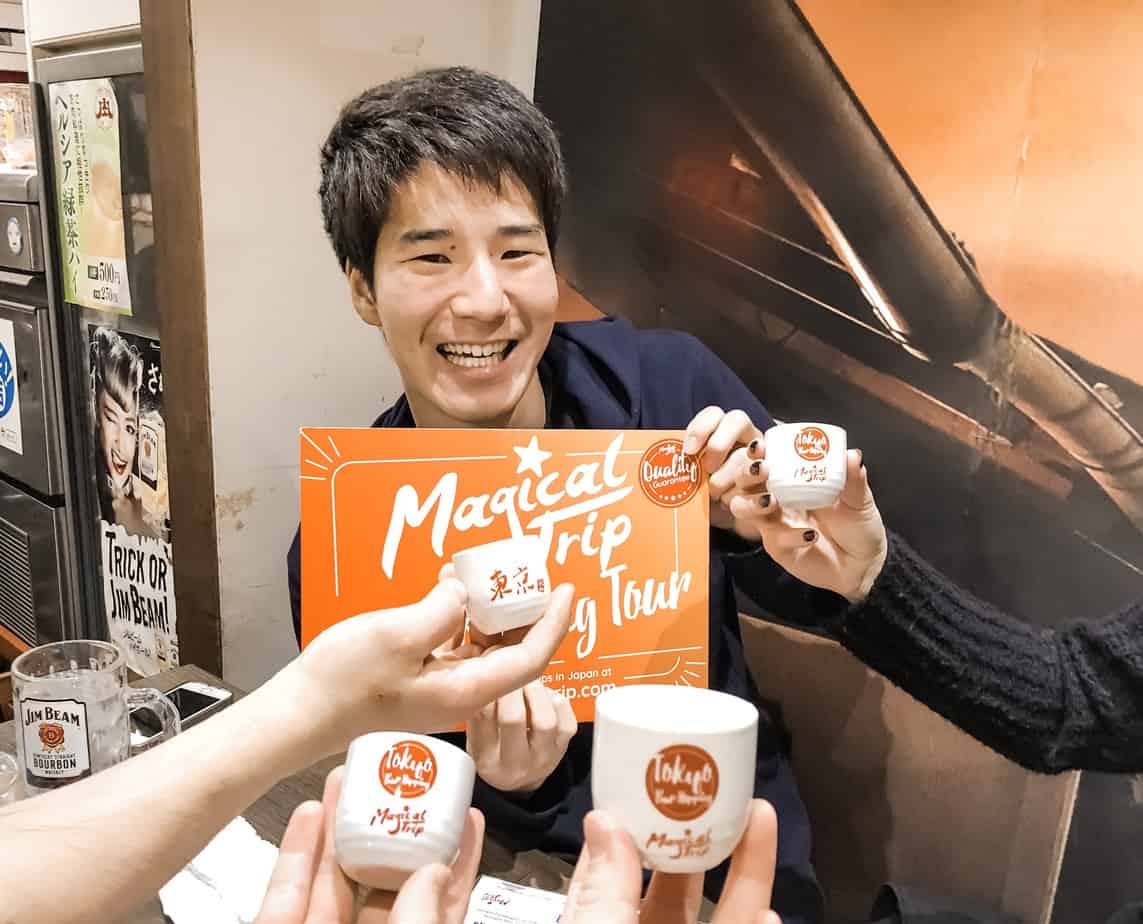 All of us cheers-ing to our wonderful guide, Ken

Our third and final stop on our Shibuya Bar Hopping Night Tour was at another izakaya in the same building as our second izakaya. Here, we were again given the option of two drinks and one large dish, and Hope and I again opted for different dishes so that we could try more items on the izakaya menu. I ordered the Skirt Steak with Cheese, and Hope ordered the Pork Tonpei-yaki, a grilled pork dish that’s made by grilling pork and vegetables rolled together in a beaten egg smear and finished off with a mayonnaise-based drizzle. 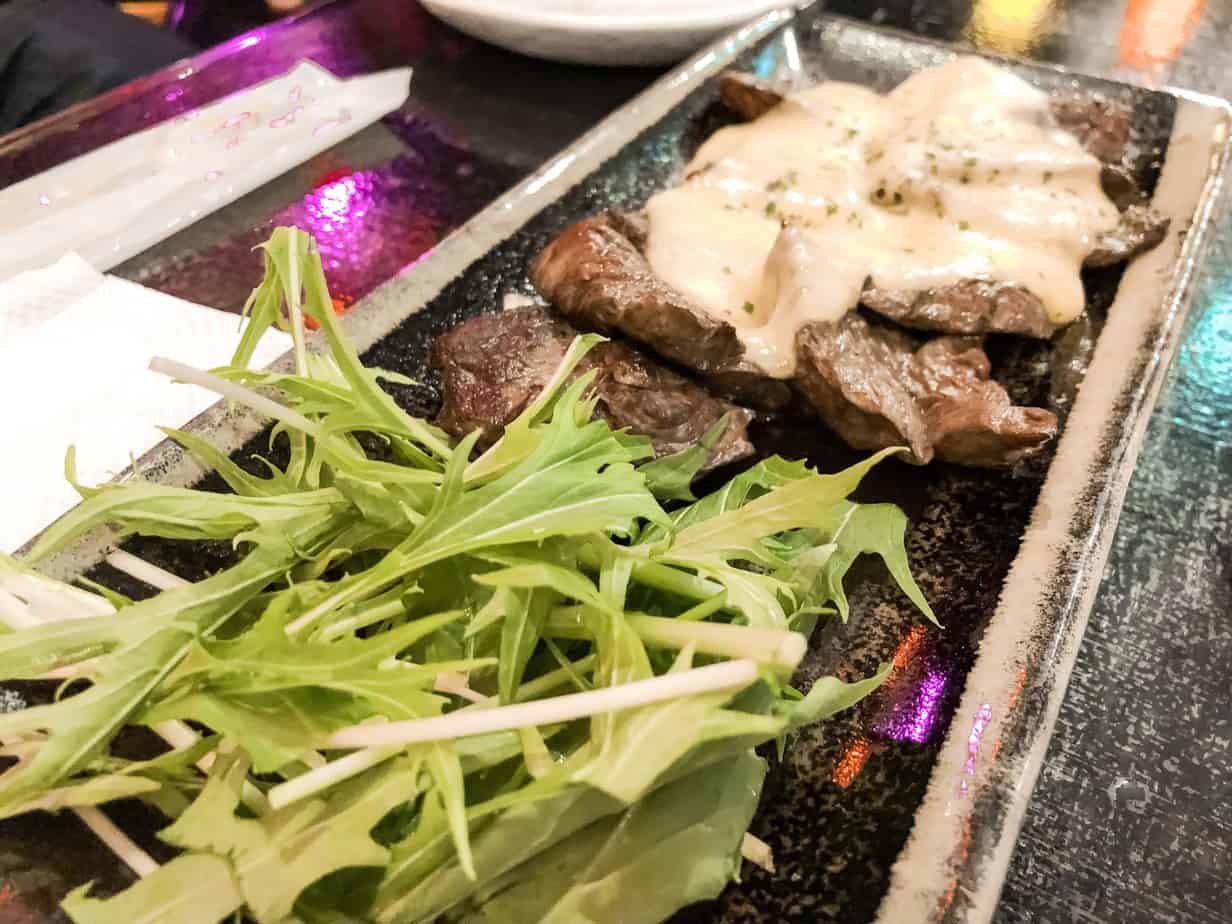 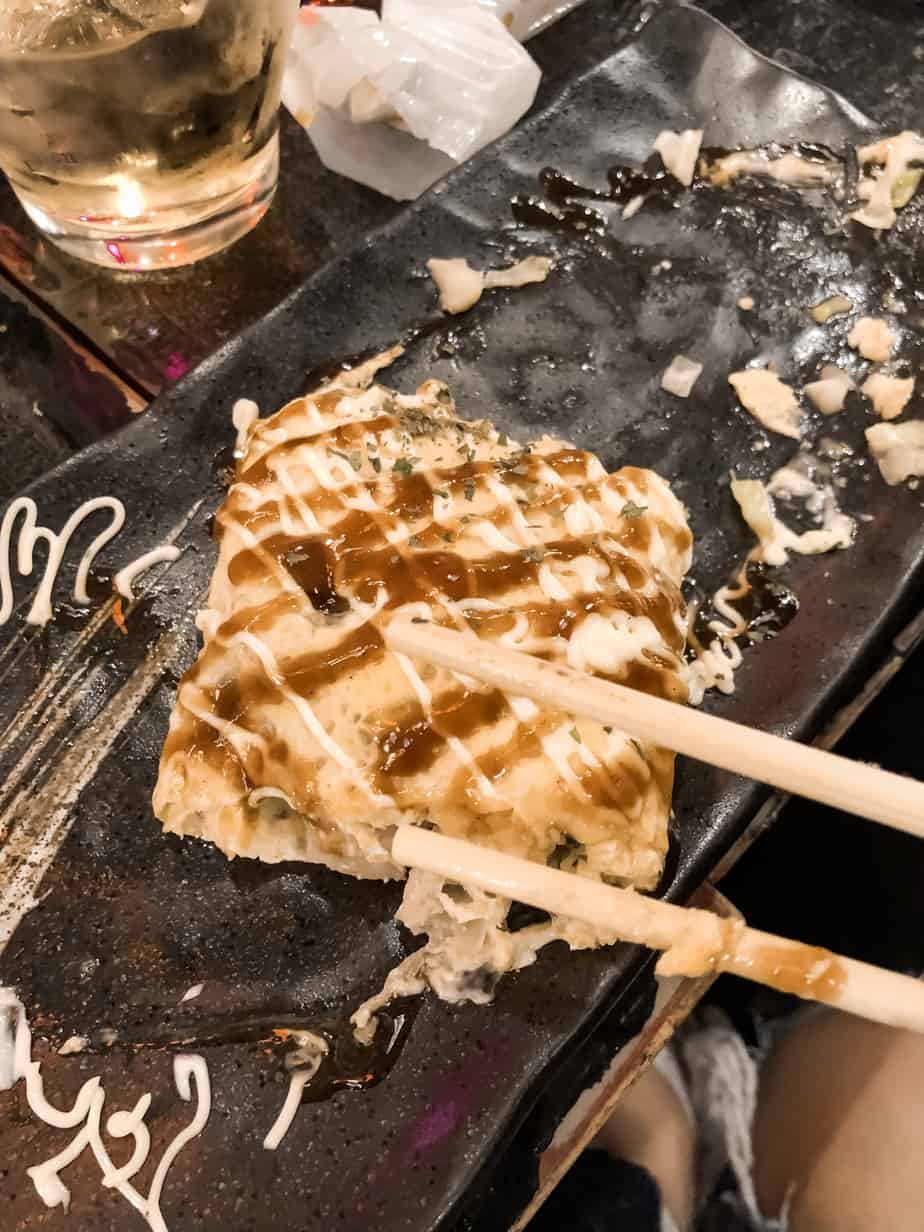 One thing that surprised us during this tour and during the rest of our time in Japan was the quantity of cheese and other dairy-based foods available at most establishments. I guess since cheese and dairy products are hardly consumed at all in Chinese cuisine, we assumed the same to be true for Japanese cuisine as well, but we could not have been more wrong about that.

Finally, we washed it all down with some more plum wine, which we ordered on the rocks this time and which tasted much less sweet than the plum wine we sampled at the first izakaya, and some Japanese shochu (not to be confused with Korean soju). The shochu we sampled, Hakusui, is one of the most famous shochu brands and has a soft, mild taste and rich barley scent. 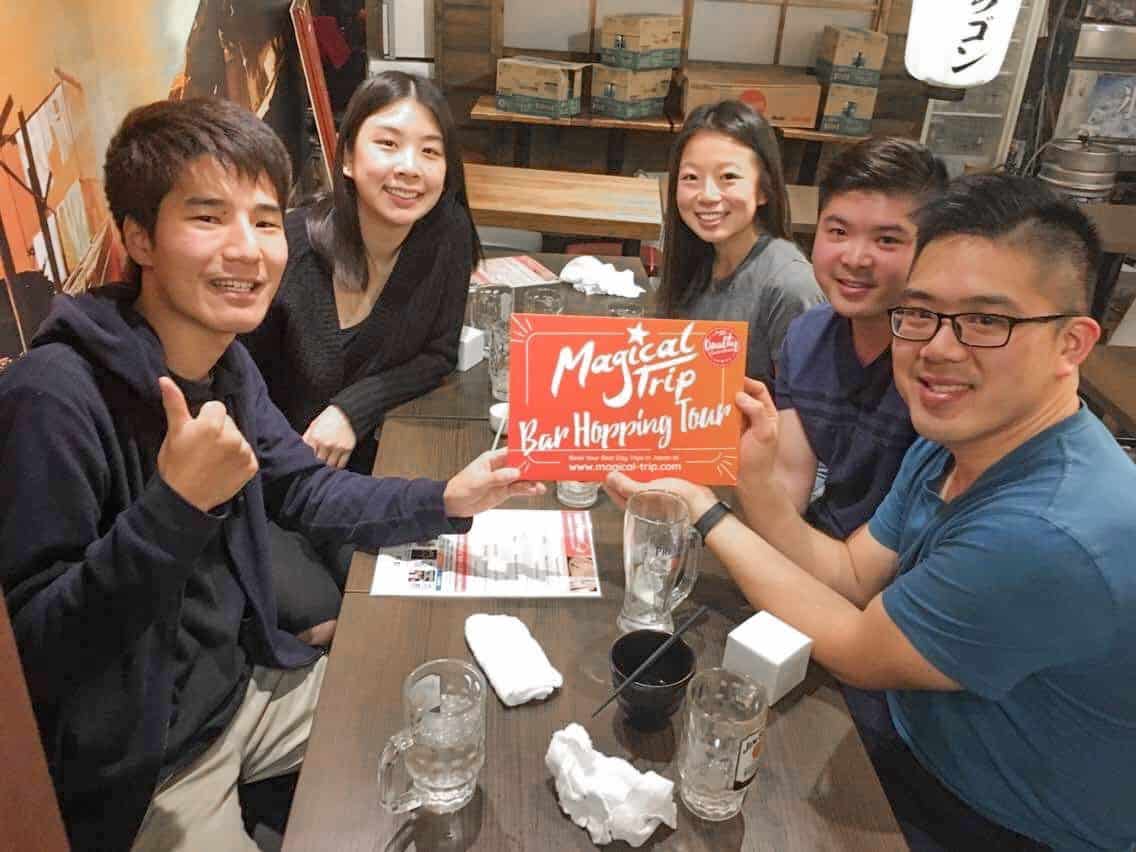 Even the best Japanese restaurant in the U.S. couldn’t compare to some of the dishes we had or the ambience we experienced on our izakaya bar hopping tour of Shibuya with MagicalTrip. We were made to feel like true locals on this tour and were given the confidence we needed to go out and explore izakaya culture more on our own, both in Tokyo and on the next leg of our trip in Sapporo. If you are wondering what to eat in Japan and are curious to explore the Japanese izakaya scene, we cannot recommend a better tour to go on than the Shibuya Bar Hopping Night Tour with MagicalTrip. For an even more authentic experience, ask for Ken as your guide! Kanpai!

Looking for more fun things to do in Japan? Then you might want to check out these posts: 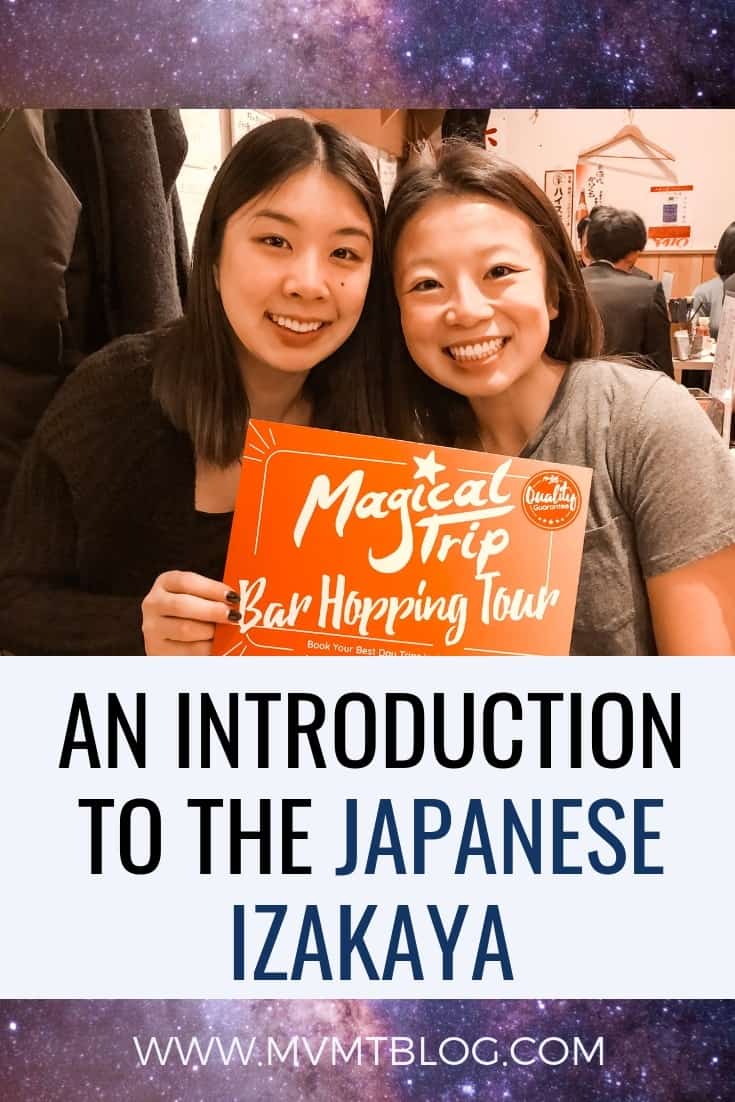 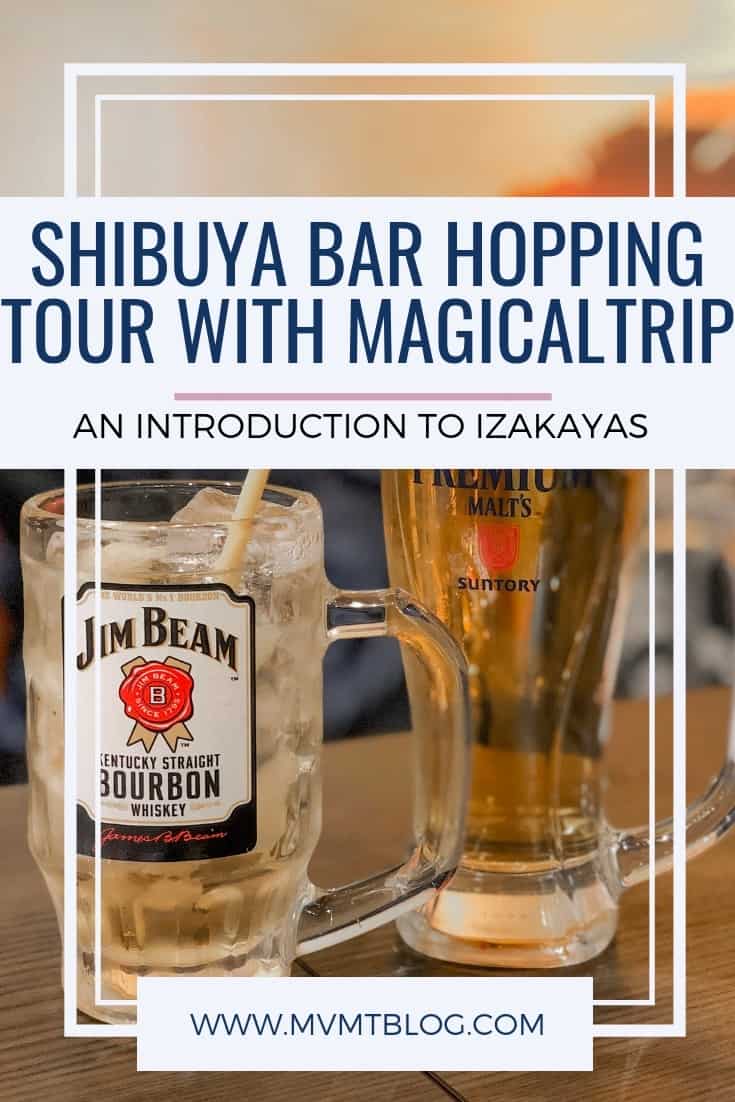 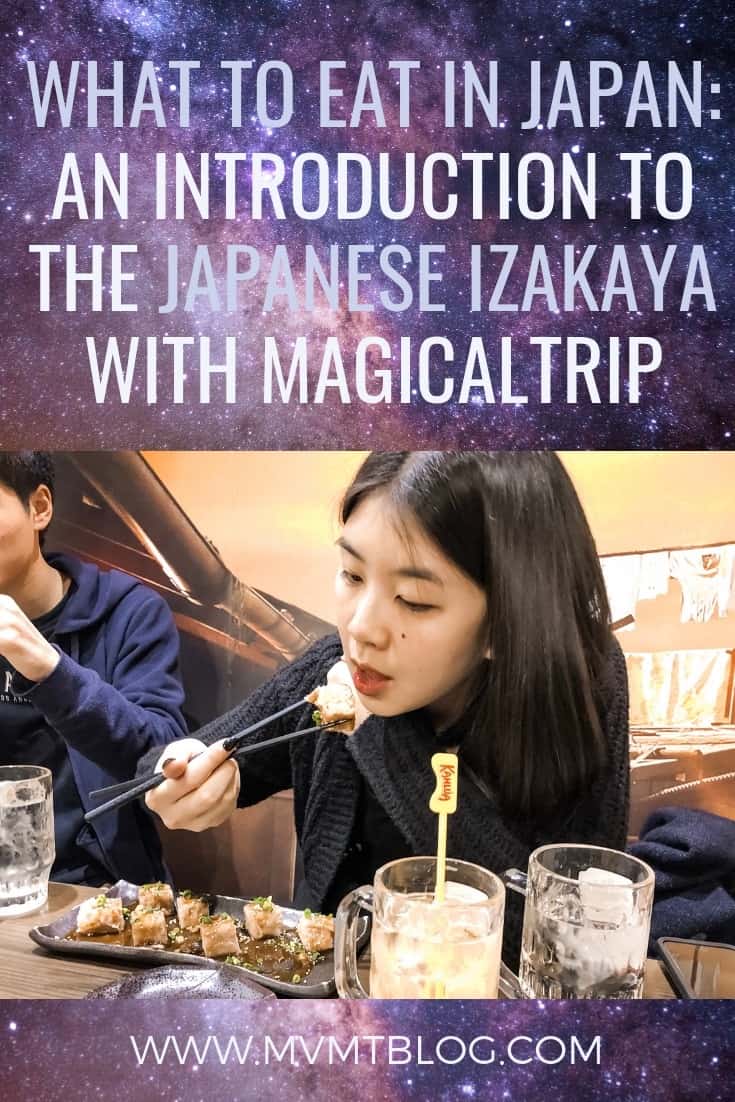 A big thank you to MagialTrip for making this experience possible for us. As always, all opinions are 100% our own.